An American Back in Bavaria / Part # 4 / Kampenwand Hike 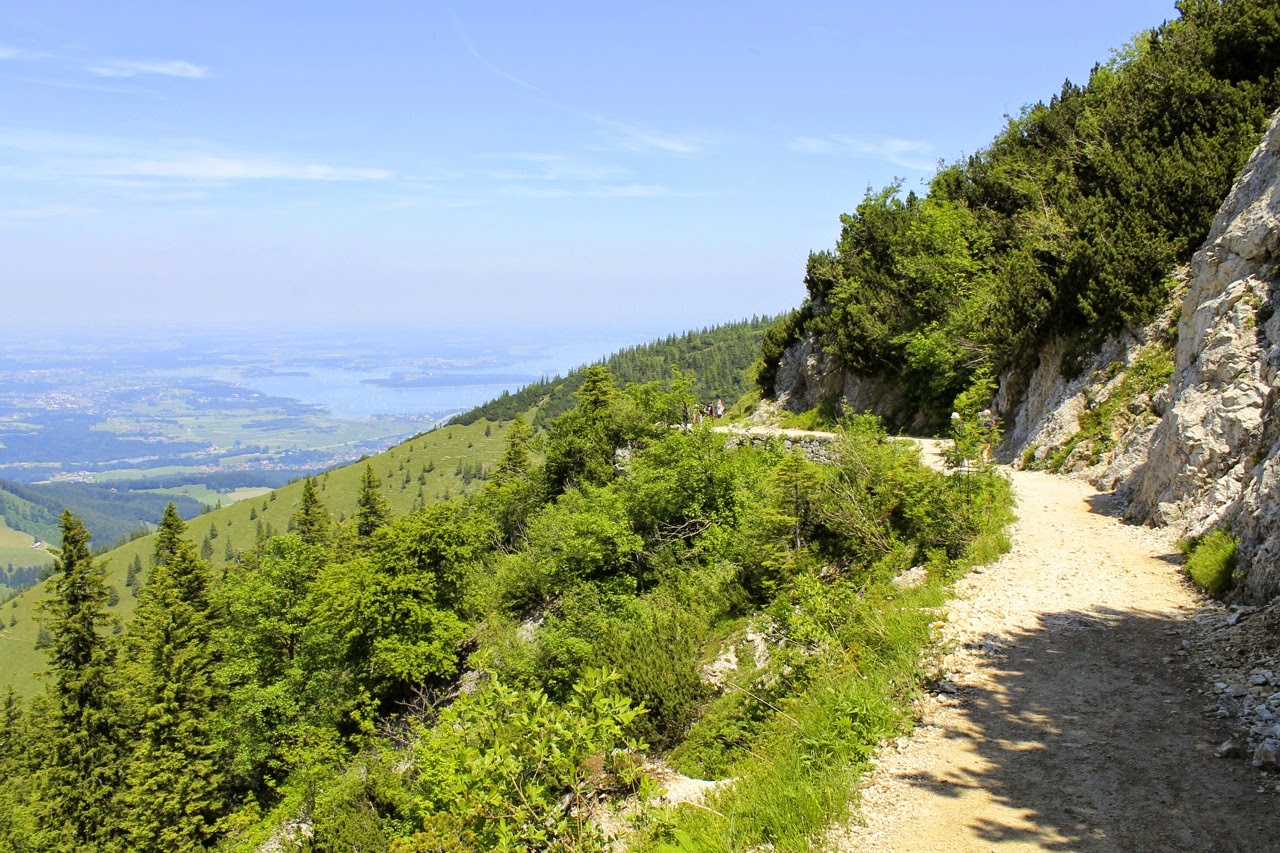 Rugged Kampenwand Trail
--------------------------------------------
We continued on our tour of the top of the world, walking the trail wrapping around the summit of Kampenwand Mountain in the Chiemgau Alps.  Lake Chiemsee had just come into view in the valley below.  It was a beautiful day full of sunshine but slightly hazy in the midday heat of summer.  We were making our way toward a small mountain top restaurant nestled in the middle of the mountains.  As we got closer to our destination, more Alpine cows were seen grazing on the lush green grass of the nearby hillsides.  The curving path began to straighten out at the base of a steep ridge of solid rock just above us on the right hand side of the mountain.  As before, a large erected cross marked the high spot of the ridge above us, where successful climbers were massed at its base.  Erwin, my Bavarian friend and guide on this trip, told me he once climbed to the summit as a younger man but now was content to sit in a cafe in the summit's shadow, enjoying a refreshing cool drink!  Sounded good to me! 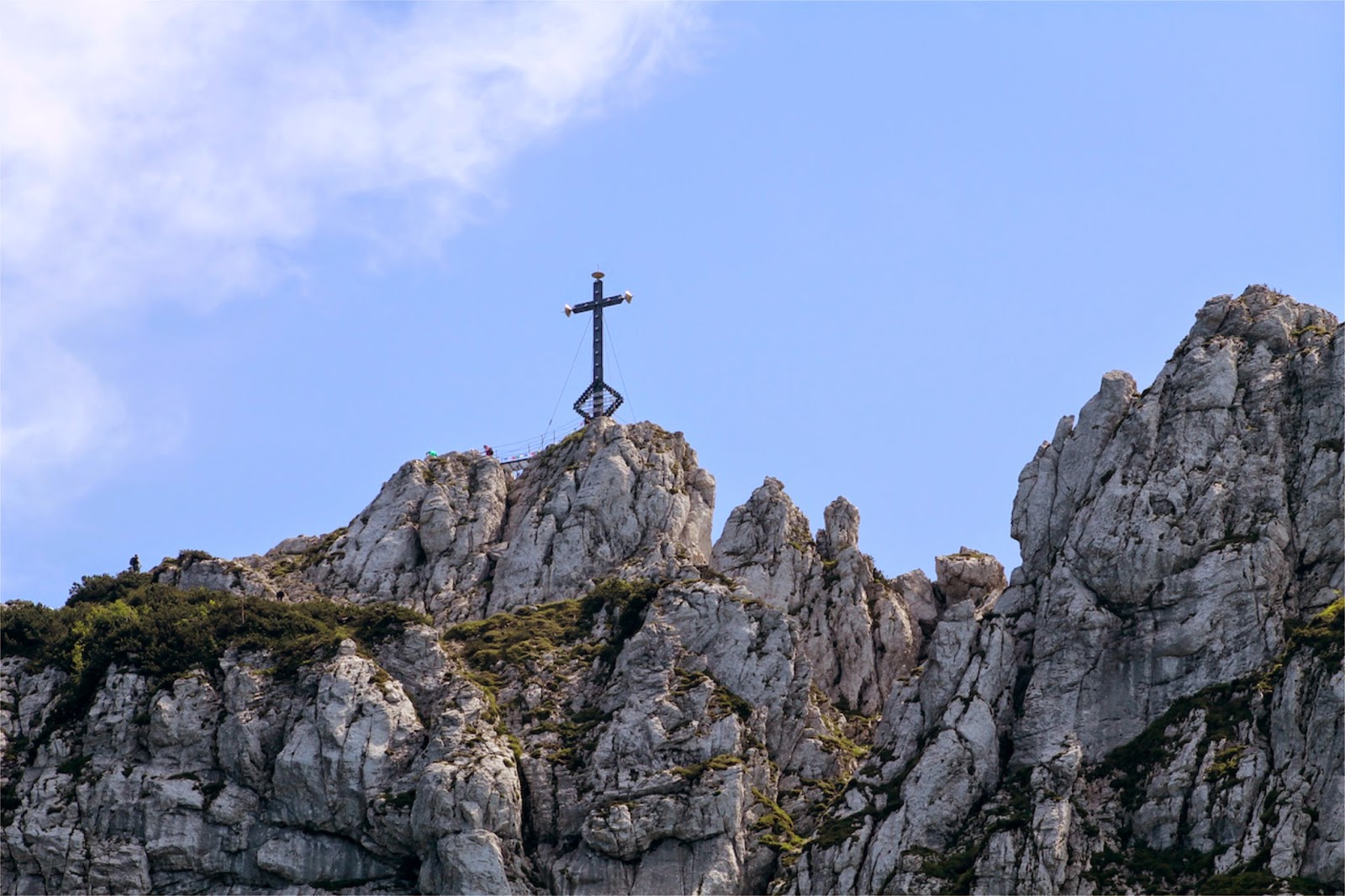 Cross at Ridge Summit of Kampenwand
-----------------------------------------------------------
We walked along the face of the 500 foot tall ridge, watching people perilously climb upward toward the location of the cross.  We came to the crowded small cafe style restaurant and Erwin went in search of seating for all of us.  The place was surrounded by wooden fencing with a wide swinging wooden fence gate that opened to allow patrons access to the tables.  What a strange doorway for a restaurant?  It puzzled me somewhat until I saw a cow walk by... Ok, now I get it.  I continued to forget, I was really walking through a massive cow pasture and the gate was to keep the cows from entering the cafe!  The cafe and accompanying cottage was called Steinling Alm and offered foods created from local Alpine farmers in the form of vegetables, meats, and cheeses.  The site also offered lodgings for overnight guests within the stone cottage, located a few short steps from the cafe.  The site is so remote, I could not figure out how the food and other supplies were delivered, especially during inclement weather. 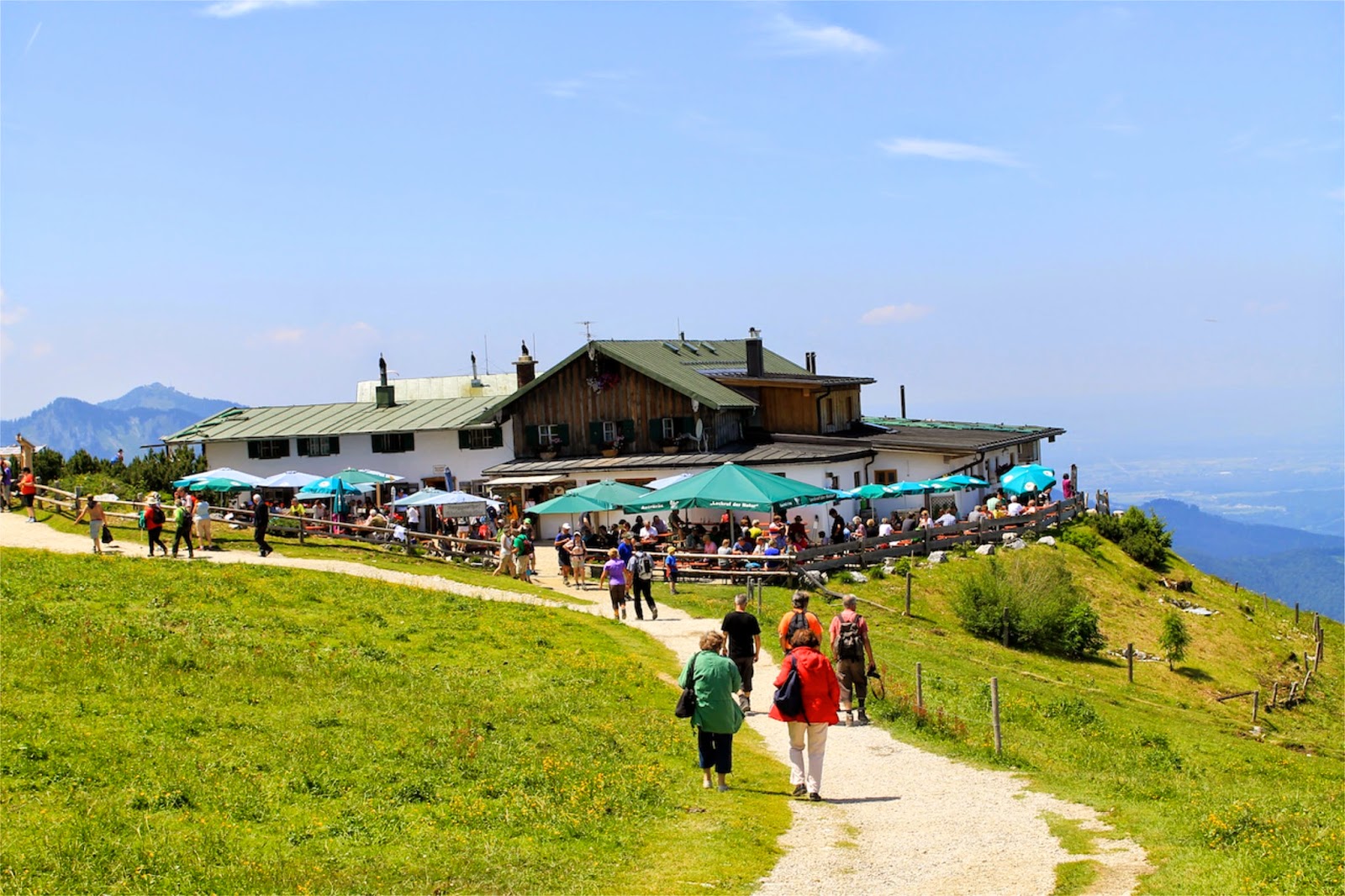 Steinling Alm Mountainside Cafe
-------------------------------------------------
The fare is traditional Bavarian and I once again put my trust in my German speaking companions to order me something from the foreign menu.  My food included rye bread, fresh vegetables, sliced sausages, luncheon meats, and several kinds of cheeses.  The contents of my lunch were most likely courtesy of my newly made friends, the Alpine cows I met earlier!   The food was great and my plate was bare within a few minutes.  I excused myself to go and explore the area in more detail as the others finished their meal.  There was a small chapel further up the path, which I assumed was a stop for the many pilgrims who journey this pathway.  As I proceeded a little further beyond the chapel, there were several more mountain top summits visible in the distance, each marked with a large cross.  There were also many more cows grazing on the steep grass covered foothills and others laying down to rest in a large group directly in front of me.  Which ones should I thank for the butter and cheeses in my lunch?  I played it safe and said "Danke" to them all! 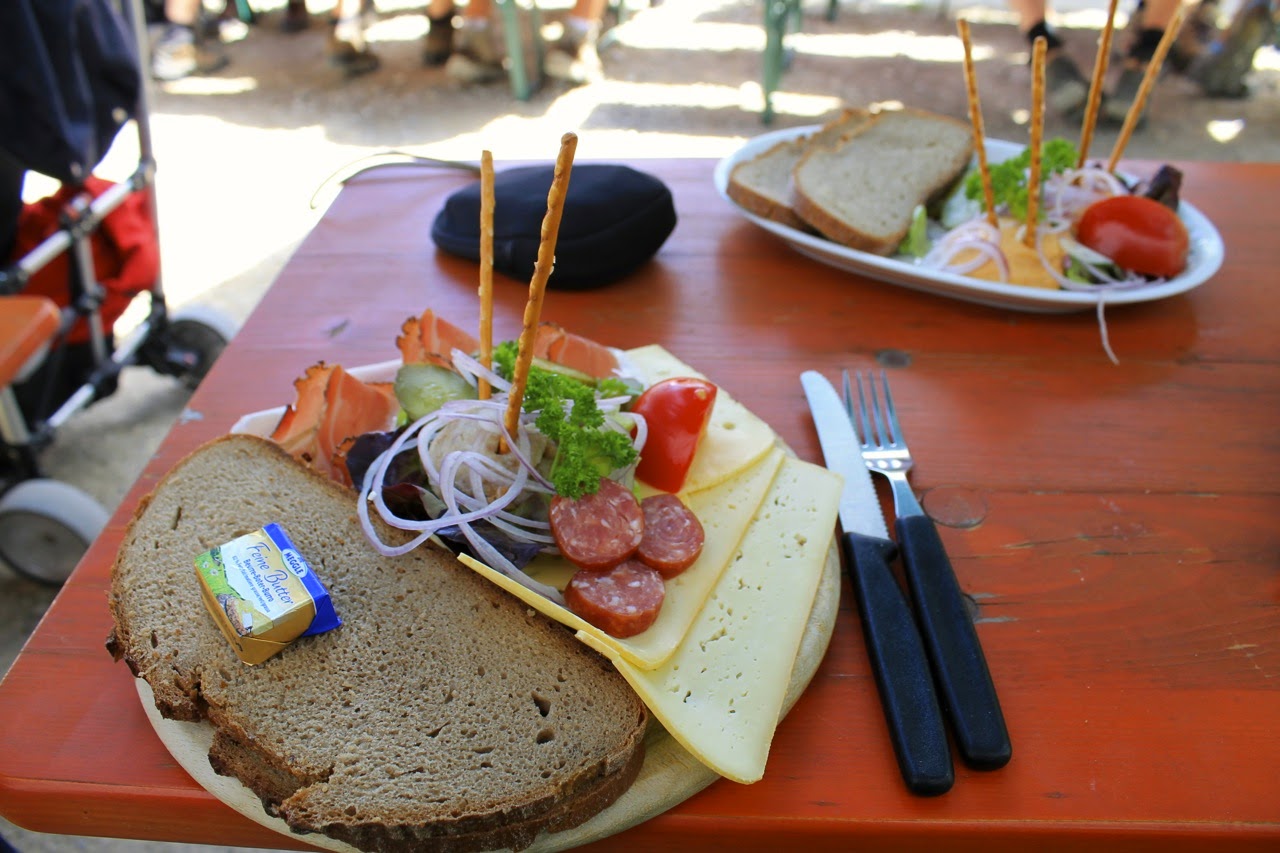 Traditional Alpine Fare
------------------------------------
I soon caught up with my party and we headed back up the mountainside trail, which gave us all a different perspective of the same previous views from above and below.  The kids were resilient, preferring to walk much of the way on their own, which helped make the stroller much easier to maneuver on the rocky trail.  Leo, Amalie, and Rosalie took it all in as a matter of course as little Alpine hikers in training.  I noticed rows of perpendicular wooden cribs suspended by thick wires nested within the rock crevasse at various intervals directly above our position and asked Erwin their purpose.  He replied they were strategically placed to protect people on the trail during winter from being swept away by potential avalanches.  Wow, once again I was reminded I was now in the Alps!  Soon we retraced our steps around the rim of the steep cliff drop off and I felt myself instinctively drift left toward the mountain side, a safer line of travel, despite the current season of the year! 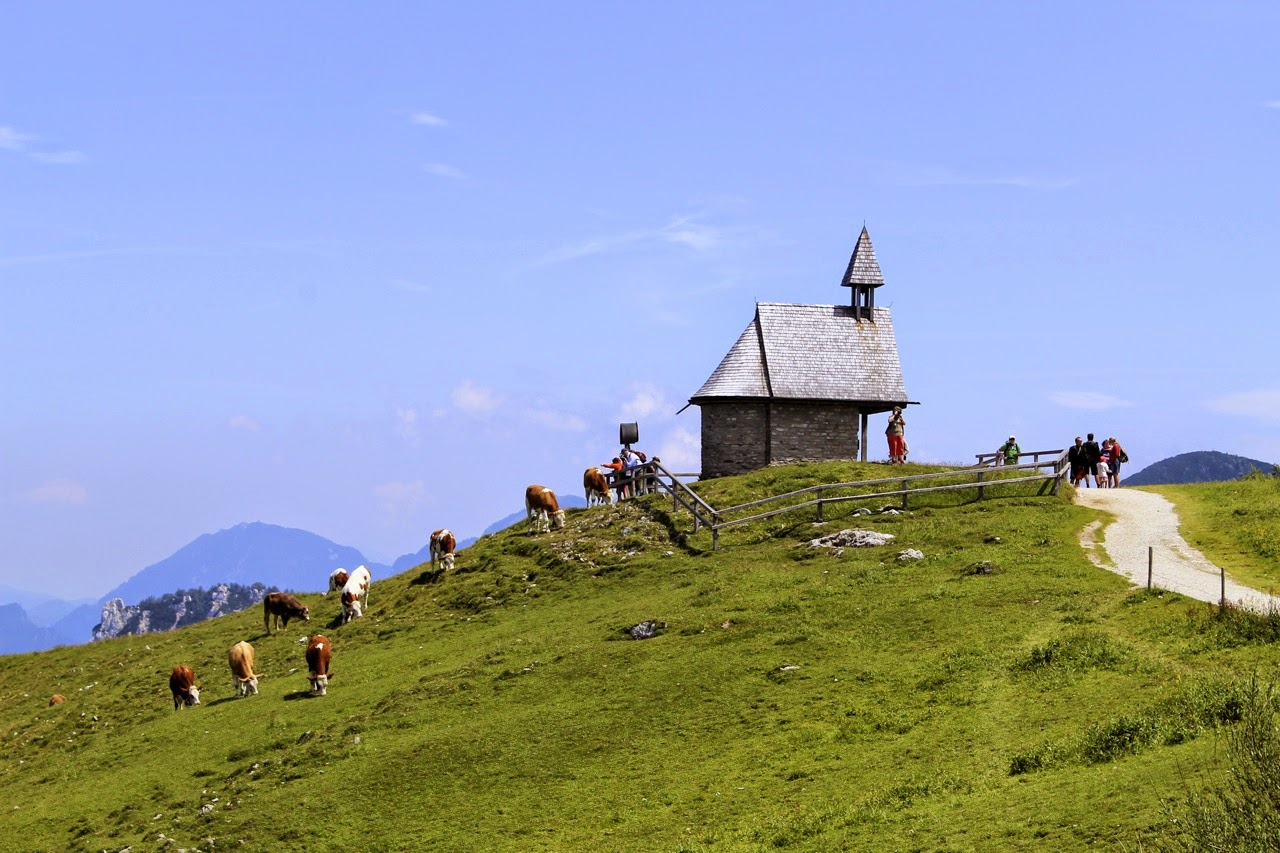 The Mountaintop Chapel
--------------------------------------
The sun was hot and Erwin and I, as the older guys within our group and burdened with the convenient excuse of the stroller, fell further behind the youthful women and children who were now out of site.  We took several short breaks to catch our breath, as this was still the Alps after all.  However, I was all soon all alone as I continued to stop to take pictures, not wanting to later regret any missed opportunities to capture digital memories.  There were several other Alpine residences periodically dotting the landscape, that were either private homes or other lodges.  Either way, what a view to take in during morning coffee!  I eventually caught up to everyone who were all taking in the view from both sides of the ridge by the cable car station.  We got in line and waited our turn once again, divided into two groups to board the moving car.  The ride down was equally thrilling as you could see the ground level station far below.  Across the way a formidable stone castle came into view known as the Schloss Hohenaschau, a fortress first constructed during the 12th Century. 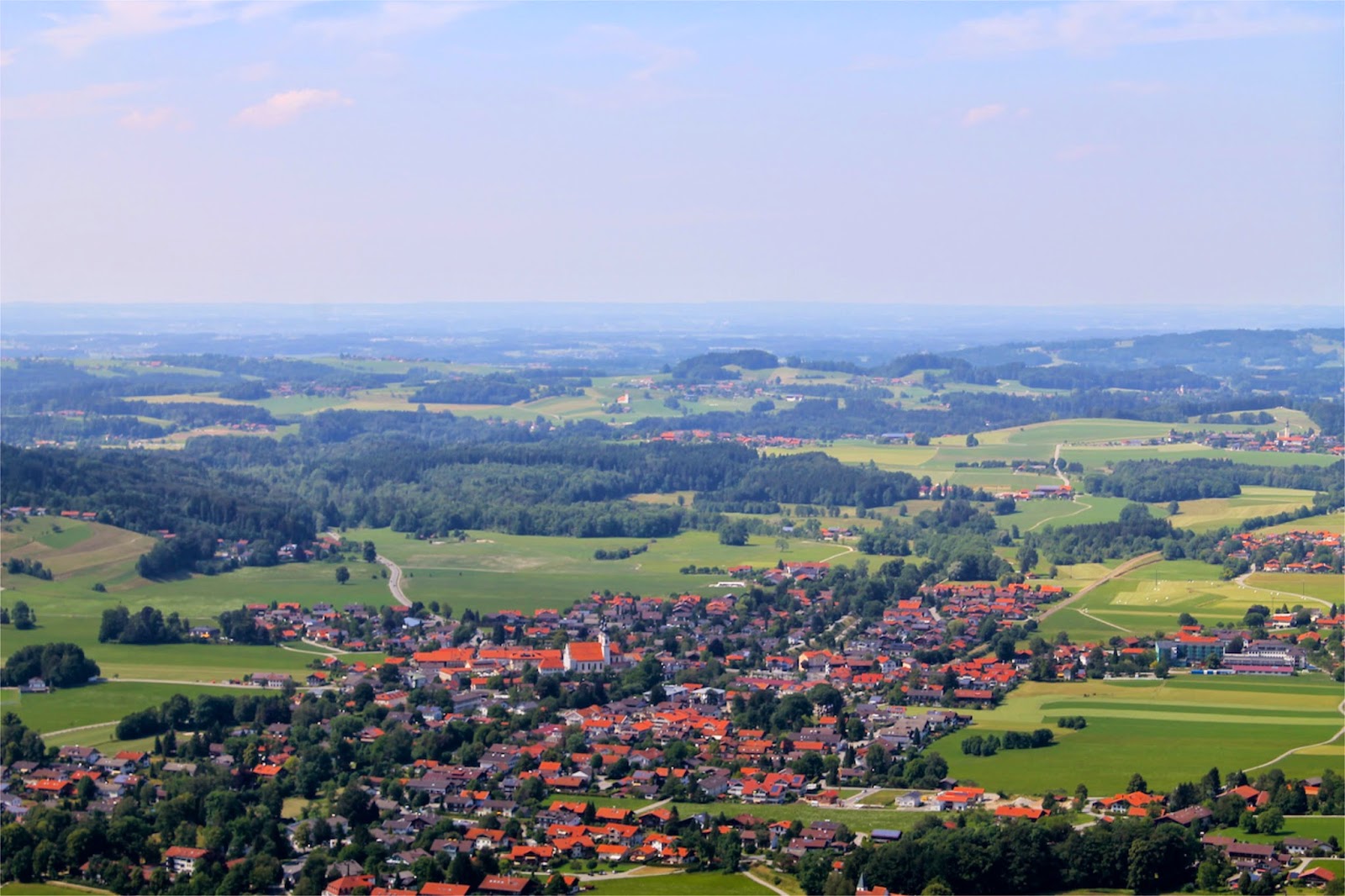 Descent View of Chiemgau
--------------------------------------
The red terracotta rooftops of the town became larger and more distinct with the descent of our cable car.  Soon we were back on level ground with Kampenwand Mountain of the Chiemgau Alps towering boldly overhead.  We briefly stopped in the small gift shop where I was able to purchase a collector's pin to add to my collection of visited Bavarian sites.  We started our drive toward home through the colorful streets of Chiemgau and I hoped I may return one day to explore the town streets and hilltop castle of this amazing place.  It was a beautiful day and once again and I was completely blown away by the things I got to do and see.  A cable car ride, Alpine cows, hiking in the Alps, lunch at a mountaintop cafe, seeing para gliders, and mountain climbers...  I was wondering what other surprises were yet undiscovered on this three week adventure.  Tomorrow was another day, I can't wait! 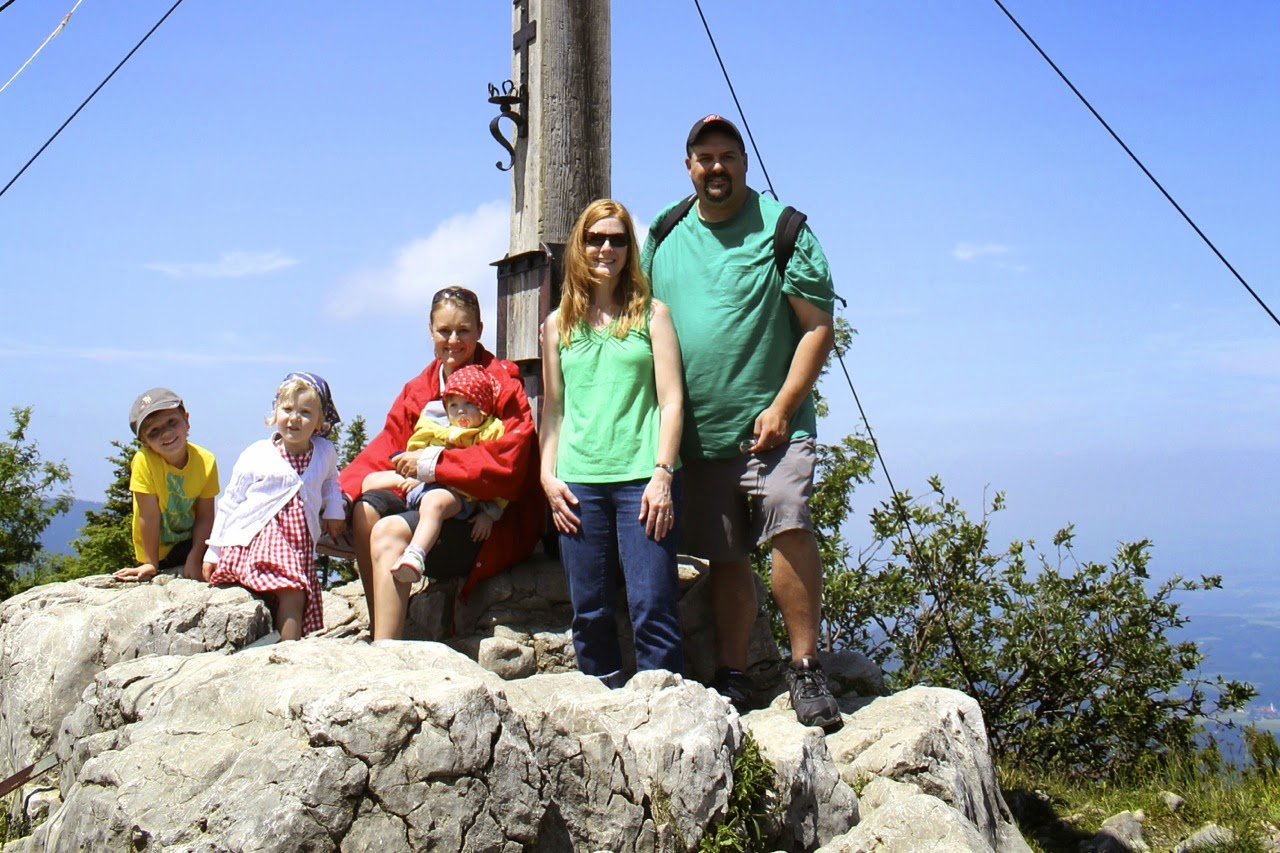