An American Back in Bavaria / Part # 3 / Kampenwand Climb 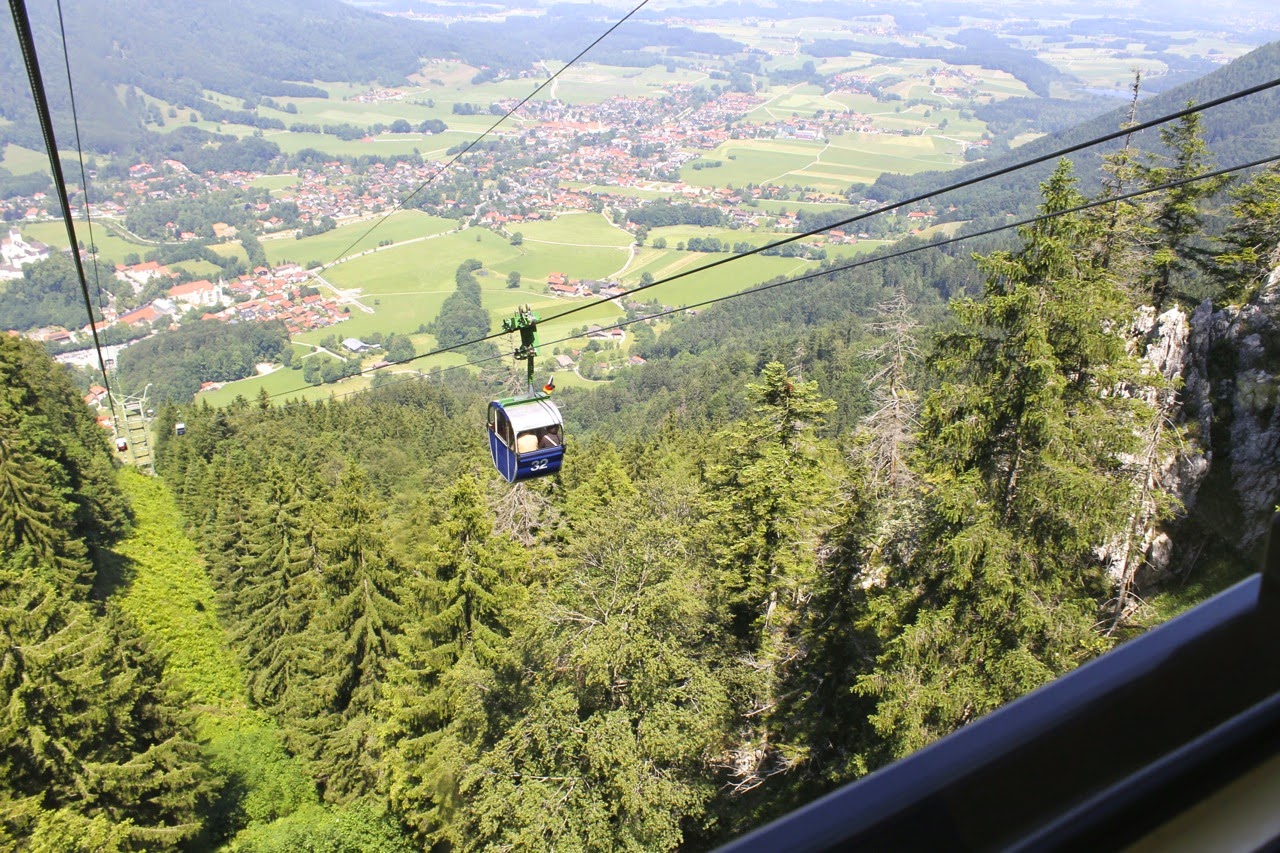 Cable Car Ride to Summit
----------------------------------------------
On this day trip adventure, I was told we were going to go hiking in the Alps but it would be an easy climb.  Alps and easy climb didn't seem to go together in my mind but when in Bavaria... Wendy and I would be accompanied by my host Angela Shadhauser, her father Erwin, and the kids.  If little Leo, Amalie, and Rosalie could handle the climb, I think I can make it!  I rode with Erwin and exchanged great conversation, catching up with one another since my last visit.  Mr. Schadhauser, who was locally famous for his delicious backyard goulash, was one of my favorite people to spend time with during my last visit.  He had visited one of his sons in California the previous summer and was telling me all about his extensive trip to the western coast of the United States.  He drove his Mercedes with precision through the twisting and turning rural roads of the countryside, as I attempted to absorb every detail of the ever changing picturesque setting that is Bavaria.  Again, I can't believe I am here!

View from the Summit
---------------------------------------
We passed through a beautiful small town known as Chiemgau and soon turned into a parking lot where we met up with Wendy, Angela, and the kids.  I immediately noticed the colorful cable cars scaling the steep mountainside through a gap cut through the evergreen trees.  Now, this was my kind of mountain climbing!  Mr. Shadhauser secured us all tickets and we boarded into two separate cable cars to climb the 4,921 feet to the top.  The ride provided amazing views from all sides and one window was down a few inches, allowing me to get some unobstructed amazing shots of our ascent with my camera.  The mountain face was occasionally broken up by large formations of sharp bright rock that stood out in stark contrast to the deep lush green blanket of endless evergreens.  The ride went on for what seemed like several long minutes but was smooth and relaxing.  We stepped out of the moving cars with care and climbed a short staircase to exit the station where we encountered an amazing view.  On one side was the view of Chiemgau and the accompanying expansive valley far below and on the opposite side, the distant higher snow capped Alps.  It was very humbling! 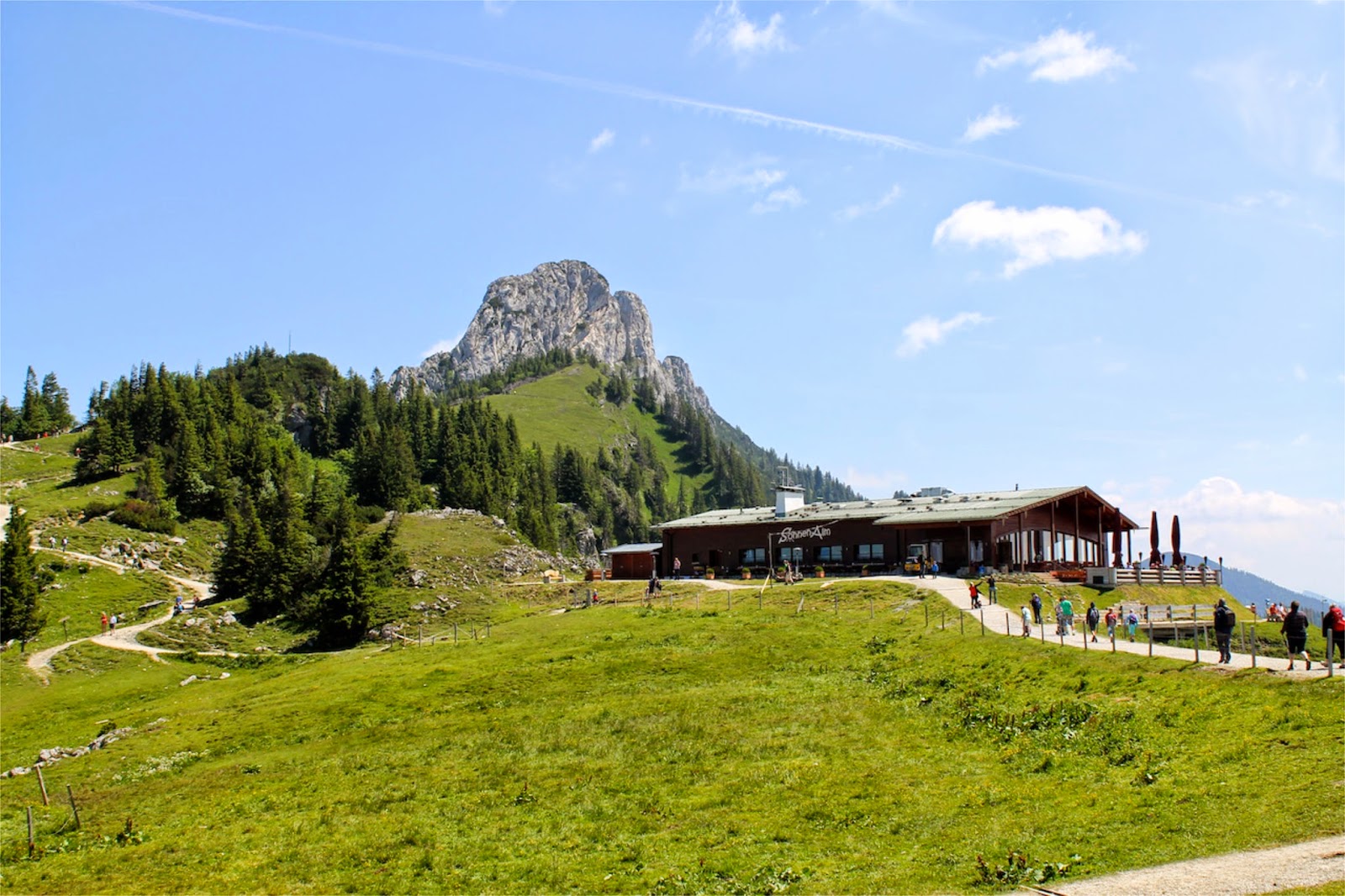 Sonnenalm Summit Restaurant
-------------------------------------------------
After taking in the views and a few pictures we decided to scale the mountain a little higher by way of a pathway of switchbacks that rose toward a large protruding  rock face.  On our way to the pathway, we passed by a mountain top restaurant known as the Sonnenalm, which serves the community year round with meals, weddings, and various special events.  It resembled a small ski resort with wide panoramic windows and a large outdoor deck full of available seating.  In winter, the topside area transforms itself slightly, to cater to winter sports enthusiasts.  I later learned, a favorite pastime of winter visitors was to take the cable car up to the summit, grab a bite to eat at the Sonnenalm, and then ski all the way down to the lower station.  We began the climb upward, which was a little challenging with a stroller, which Mr. Schadhauser and I took turns pushing and lifting up the pathway.  Soon I began to hear the sound of a distant bell that became louder as we climbed.  I could not figure out who would be ringing a bell all the way up here and why? 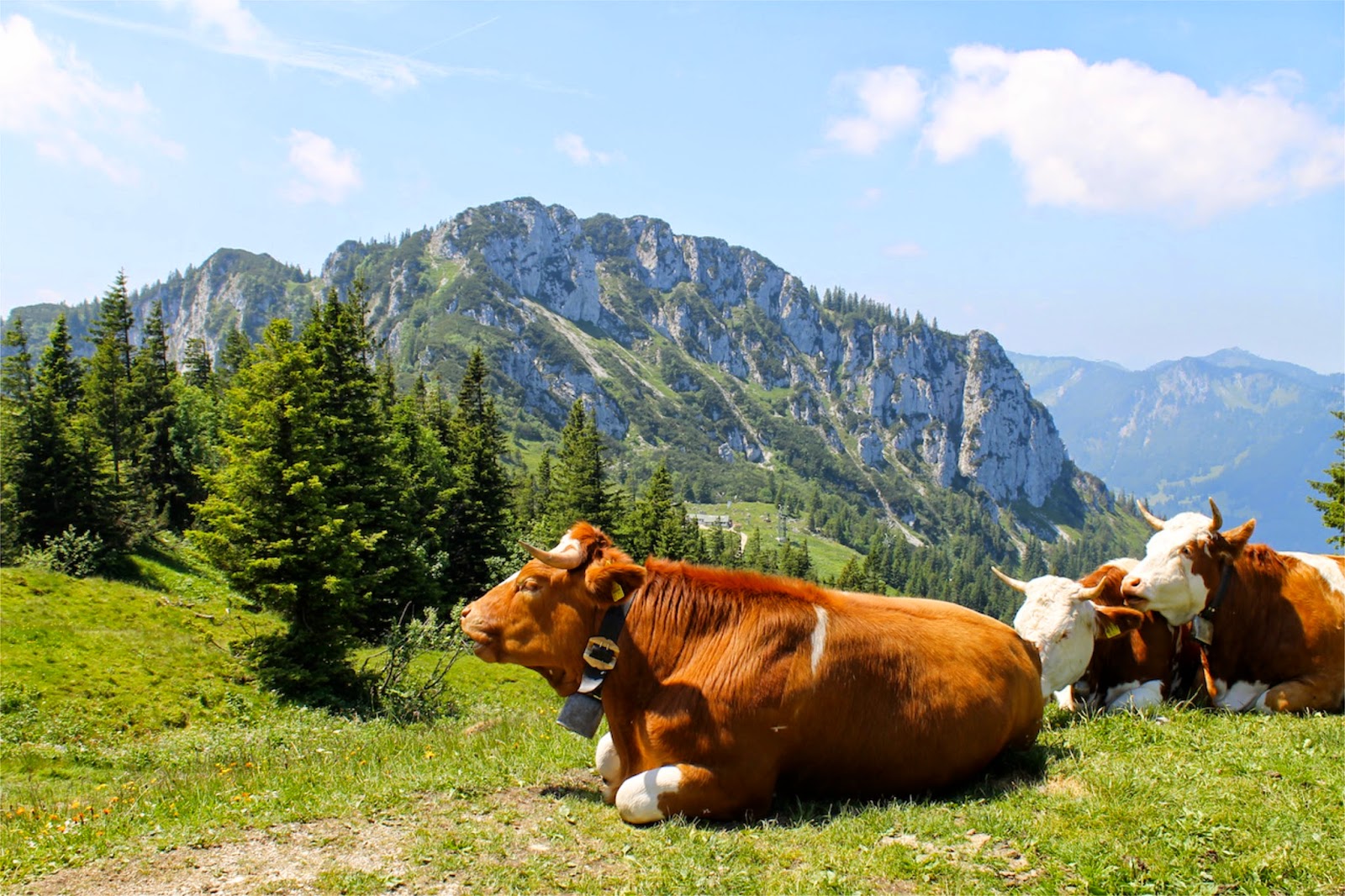 Real Genuine Alpine Cows
--------------------------------------------
As I rounded the final turn in the path, I was suddenly blown away by the sight before me!  Several large Alpine cows were resting on top of the mountain with large leather collars each supporting an equally large cow bell!  Where was the farmer?  In fact, nowhere in sight.  The cows roam free and were as tame as any household pet. Kids of all ages stopped to greet the four legged hikers, who seemed to be relaxing in the warm midday sun and enjoying the beautiful views like everyone else.  A nearby gathering spot supported a large wooden cross, a common site in Bavaria at mountain summits.  I would see several more today as each individual peak within sight housed its own religious themed cross.  Some people hike great distances on religious pilgrimages to a specific sacred end points by way of the mountains passes. Some pilgrims scale to each peak's cross along the way to challenge themselves as part of their quest and as a personal sacrifice of their faith. 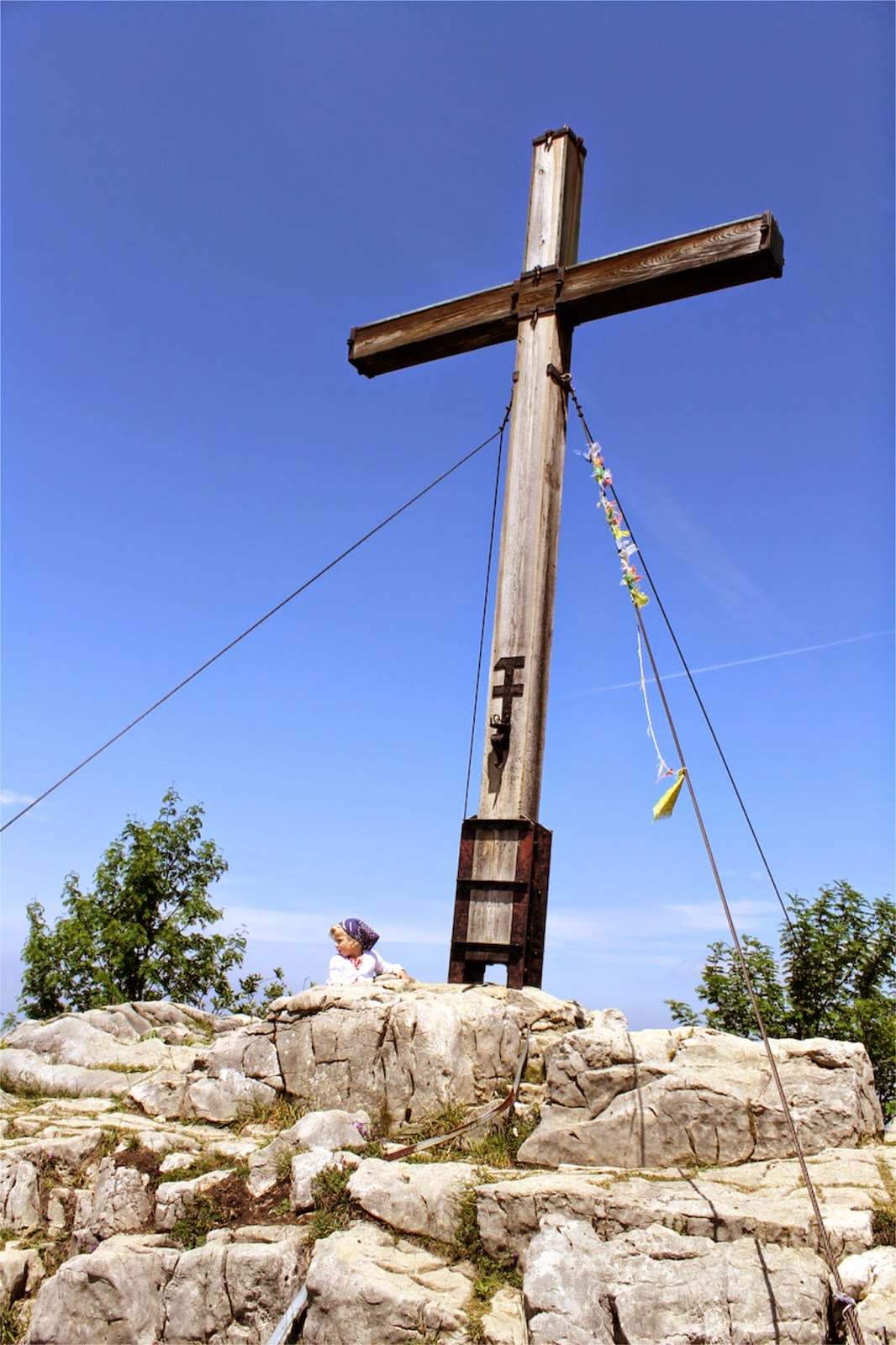 Amalie on Top of the World
----------------------------------------------
After taking some photos and hanging out with my new friends, the Alpine cows, we continued on our way on the path that curved around the side of the mountain.  The view continued to reveal more amazing perspectives of the valley below and the towering rock formations above.  My eye caught several small dots of bright colors that turned out to be tiny mountain climbers slowly scaling the rock face far above us.  Below, a para-glider with a bright orange sail chute glided over the surface of the sky, occasionally rising sharply upward on thermal updrafts.  It was a true adult playground of thrill seeking activity for mountain enthusiasts of all skill levels.  I had never been in such an environment before, with such extreme rock formations jutting outward around me.  The green tree covered sides of the mountains appeared soft, in contrast to the rock spires that were sharp and full of suggested danger. 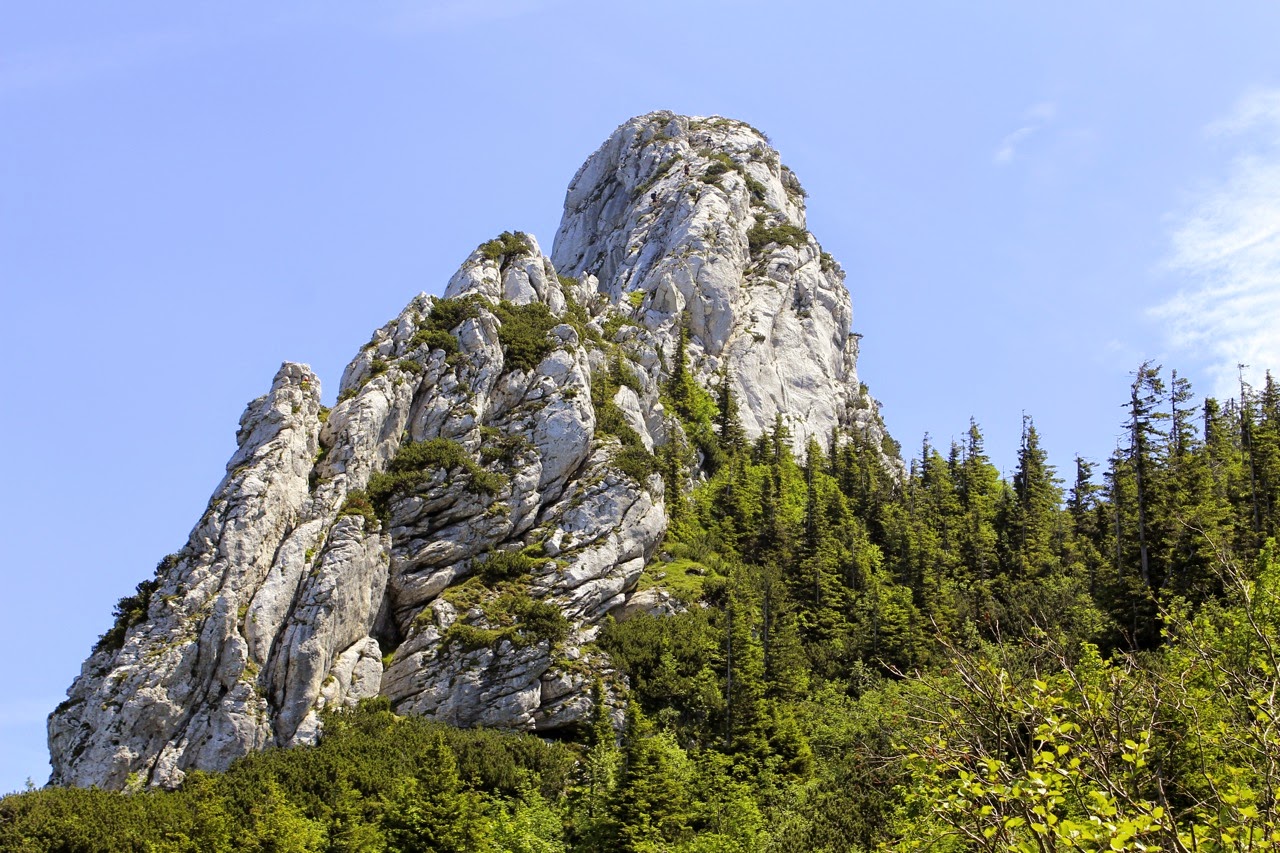 Can You See the Mountain Climbers?
----------------------------------------------------
As we continued on our way around the mountain top, we began to descend slightly, around additional large rock spires and a sharp ledge that dropped several hundred feet straight down.  I could only imagine how much more treacherous this hike would be in winter, covered with snow.  Snow hiking is also a popular winter activity at Kampenwand, but I think I'll pass and stick to the summer months.  As we followed the curve of the path, the main attraction of the valley view below came into focus. Lake Chiemsee, which is also known as the Bavarian Sea, came into view far below. The massive lake, that Wendy and I had visited two years earlier with Angela and Mr. Schadhauser, was laid out below like a large flat unfolded map.  The sky was slightly hazy, which obscured the fine details of the outline of the lake but it was certainly there.  I had no idea we were that close to Lake Chiemsee, but needed no help in identifying it, since the two islands contained within it were easily seen.   In our next segment, we will continue to explore more of the hiking trails of Kampenwand  Mountain.  Stay tuned... 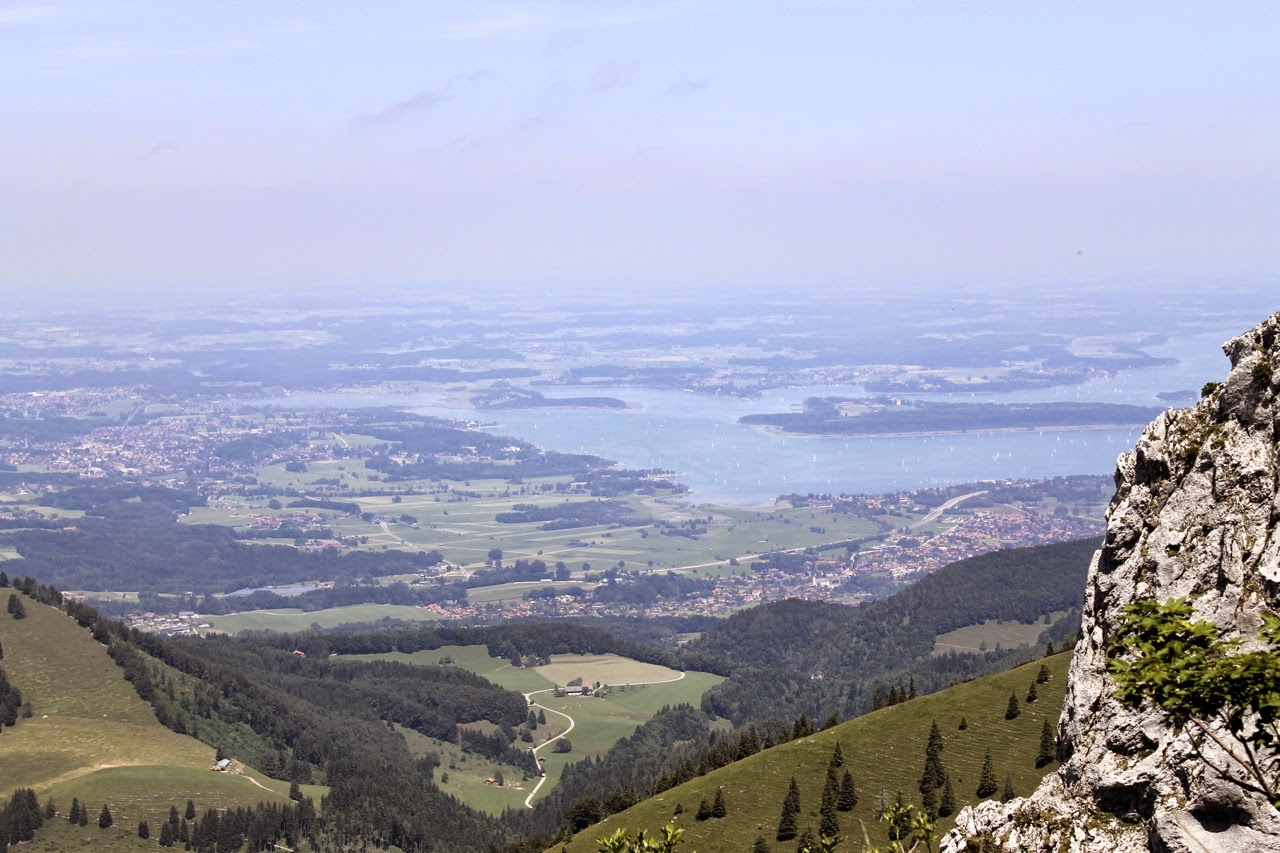 PLEASE SEE MY ADDITIONAL PHOTOS
ASSOCIATED WITH THIS BLOG POSTING AT...

Posted by Camp Martin Travels at 6:03 AM