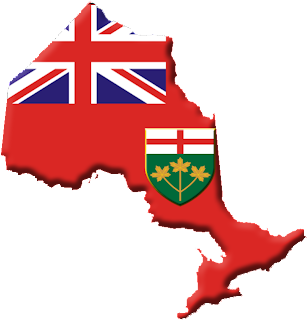 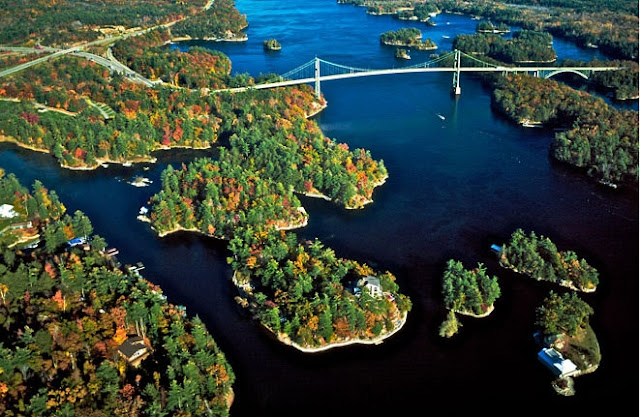 Thousand Island Bridge in Autumn
(Image Credit / Ontario Tourism Bureau)
--------------------------------------------------------
It was the summer of my sophomore year in college and my roommate Jim Locke had talked all year long about his father's annual fishing trip to Quebec north of the border.  His father had a crew of regulars who made the pilgrimage each season and Jim wanted me to join him on that year's adventure to the north.  I enjoy fishing and was game to endure the ten hour ride by car to the secluded fishing hole known as Stump Lake.  I was told the place was rustic and we would be sleeping in a tent for a week, while the adults would be sleeping in onsite campers that were rented out.  The thought of being stuck at the kiddie table at Thanksgiving came to mind briefly but Jim said it was a big tent and part of the fun.  The other benefit to the trip was some added sight-seeing around the Saint Lawrence River, including an afternoon cruise on the river itself to explore the small inhabited islands contained within, known as the Thousand Islands.  I drove to Jim's home in Allentown, where we would rendezvous with the other members of our own version of the Corps of Discovery for an extended trek north for some much needed "Man Time"  Wagons Ho.... 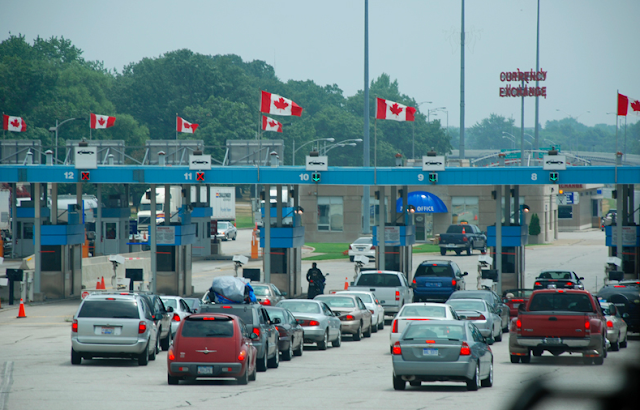 Ontario Border Crossing
(Photo Credit / Fun Times Guide)
-----------------------------------------------
I remember realizing that a ten hour car ride was a really long test of true endurance back in the late eighties... All the electronic devices my kids have today to entertain themselves during transport would really have come in handy back in the day.  I was listening to my Walkman but the few cassettes I had along were getting old and sleeping was out of the question.  Now I truly knew what Lewis and Clark must have felt on their long quest of undaunted courage toward the Pacific Coast.  Eventually we found Canada and went through the border crossing check point with ease.  This was before all the heightened security policies of the current world and after asking us a few simple questions, the friendly border guards seemed to take your answers as a matter of fact and within a few short minutes, we were allowed to proceed north.  We soon made a pit stop for breakfast and had Canadian bacon in Canada... but it really didn't taste all that different.  With the car convoy and our bodies refilled with fuel we found the stamina to continue our journey north in search of Stump Lake. Off the Beaten Path
-------------------------------
As we got off the beaten path and the scenery became more rural, I noticed that most of the houses we passed seemed unfinished and were missing some final touches, some which seemed kind of important.  Jim said it was common in this neck of the woods for people to build their homes to the point they could occupy them and save the remaining tasks for a later time, which never seemed to arrive.  "I guess we could finish the rest of the roof later... maybe in a couple years... that blue plastic tarp will do just fine in the meantime..."  Eventually we made a turn onto a dirt road that led to another and yet another until we came upon a large isolated lake nestled within the trees of the big woods.  There was a string of about a half dozen small campers docked in a row and not a whole lot else.  This really was off the beaten path and rustic with few frills!  I wanted to yell out... "Hey, where's the pool..." but decided to conceal my twisted sarcastic sense of humor, at least for now. 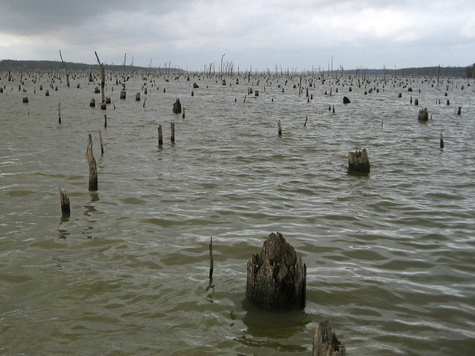 Stump Lake / Ontario Canada
---------------------------------------------
It became immediately evident as to why the spot earned the name of Stump Lake.  The area had once been a shallow valley of forest trees that had somehow been flooded, possibly from a dam that had been built on a stream that once flowed through the valley.  The standing trees had been cut down and harvested just above the water line, while the bottom half of the trees along with conjoining stumps, remained in place.  From the shore it did appear as stumps jutting out of the waterline, giving the unique lake its name.  The purpose of the submerged trees was to create a healthy habitat for fish and it must have been a success to have Jim's party return year after year.  We were the only fisherman at the entire camp and had the whole place to ourselves.  Jim and I pitched our tent and set up our Man Cave that would serve as our make-shift home for the next seven days.  The place was so tranquil and quiet, even more so as dusk fell and it was time to go fishing.  Jim and I loaded our gear and launched a row boat out on the lake with running lights to mark our position for those who stayed at camp. 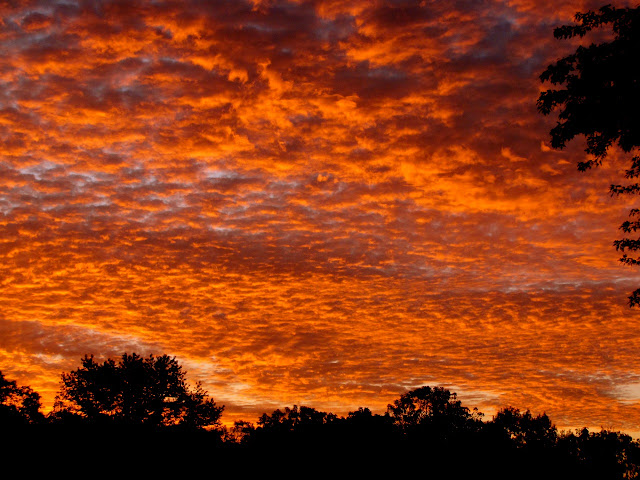 Ontario Sunset Over Stump Lake
---------------------------------------------------
It was challenging to navigate our way toward the deeper center of the lake, passing by the exposed stumps in the darkness, which suddenly appeared in the beam of handheld flashlights.  As we dropped our lures into the dark recesses of the black water, the setting became completely quiet.  Every so often the silence of the lake was abruptly broken as a large fish jumped breaking the surface of the water and falling back into the lake beyond our line of sight.  The "stumps" made fishing especially challenging as your lure could easily become caught in the soft wood above and below the surface of the water.  We frequently needed to juggle our lures free and often had to navigate our boat to the guilty stump in an attempt to free the stuck hook.   It was a little nerve racking to approach a stump in the dark as we were warned that the stumps can be a favorite hangout for many species of water snakes who like to curl around them.  We caught a few small fish but nothing to write home about and headed back to shore to turn in for the night within our newly created Man Cave. 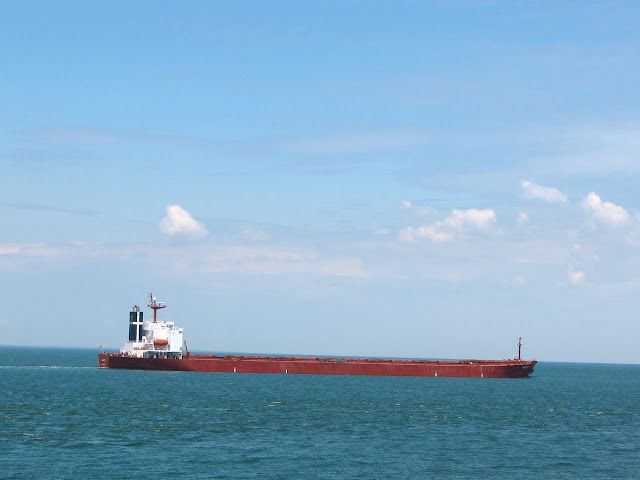 Oil Tanker Passing Aft
----------------------------------------
Following some early morning fishing, the group decided to take a break from the lake in the increasing heat of the day to go off and explore the Saint Lawrence River by taking a day cruise tour through the famous Thousand Islands area.  As we boarded the small cruise ship the impressive Thousand Island Bridge loomed overhead in the distance.  The bridge system links the state of New York with southeastern Ontario and literally bridges the gap between the two nations.  As the tour began we learned that a full time painting crew is assigned to the bridge that repaints the structure from one end to the other.  It's a never ending job because by the time the job is completed, they need to start all over again on the other side.  Talk about job security!   The Saint Lawrence River is a super highway of  industrial shipping and I saw the first oil tanker ship of my life distantly passing by to our starboard bow.  By the way, that means the right hand side of the ship... we all received a crash course in the parts of a ship and accompanying proper lingo for the tour.   The captain announced points of interest over the loudspeaker throughout our voyage using the proper terms and if you weren't up to speed you missed it!  Aye, Aye, Captain! 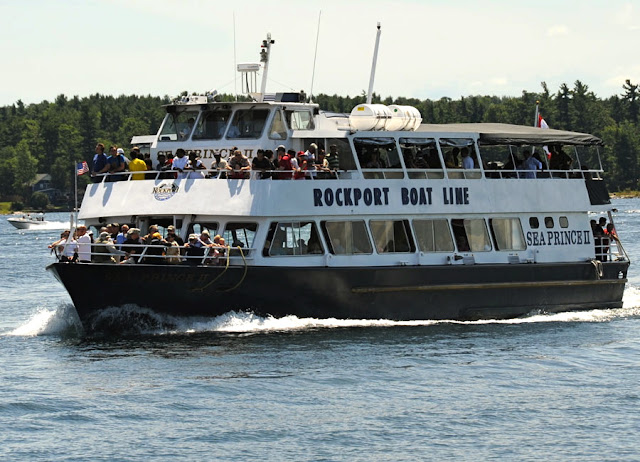 1000 Island River Cruise
(Image Credit / Rockport Boat Line)
----------------------------------------------------
The Thousand Island section of the river was truly amazing as each island held a beautiful mansion, often owned by a private club or an individual celebrity.  Many of the summer vacation homes were built by the rich and famous at the turn of the last century and include the likes of composer Irving Berlin, business magnate Helena Rubinstein, and railroad entrepreneur George Pullman, just to name a few.  The rich and famous from all over the world came to visit the Thousand Islands as guests of the New World aristocracy in a section of the river known as Millionaires' Row.  We passed by each island from a respectful distance to ensure the inhabitants privacy, while the captain described the history of each residence in colorful detail.  One island was owned by celebrity Annette Funicello, who was one of the original Mouseketeers for Disney and later went on to do a series of popular beach themed movies with sidekick Frankie Avalon.  However, I remember her as the Skippy Peanut Butter Lady who appeared on television commercials as their spokesperson in the late seventies... I love peanut butter!   Another larger island we passed was actually occupied by a group who formed a nudist colony, which I thought would be much more interesting in winter.  Fortunately or unfortunately, nobody made a surprise appearance on shore. 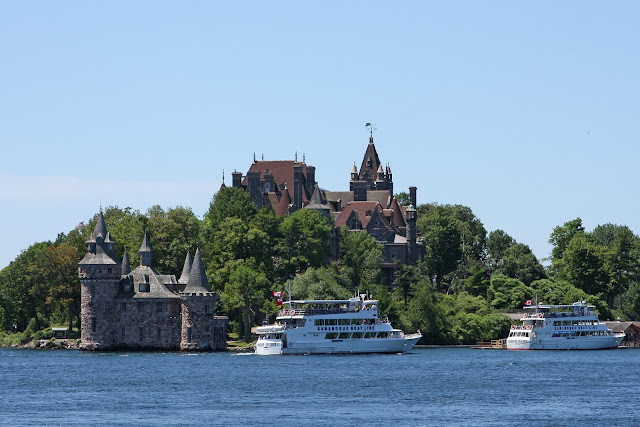 Boldt Castle / Heart Island
(Photo Credit / Ontario Tourism Bureau)
-----------------------------------------------------------
Most islands contained a single large home, which often appeared to have castle-like characteristics.  One of my favorites was the one we passed that was actually two smaller islands with a small arched bridge between that separated in the middle to let boats through.  An American flag adorned one half of the bridge and the Canadian flag was displayed on the other.  The official border between the two nations ran right along the river bed directly beneath the small bridge.  I wonder if the resident of the property was required to have dual citizenship?   It was a beautiful sunny afternoon, and the tour was fascinating, not something you get to see every day!  Eventually the ship navigated its way to the advertised star of the show.  The ship made landfall at the dock of the large island containing famous Boldt Castle.  Tune in for the next installment of our Ontario adventure as we explore the unique castle and continue to do some fishing on Stump Lake. 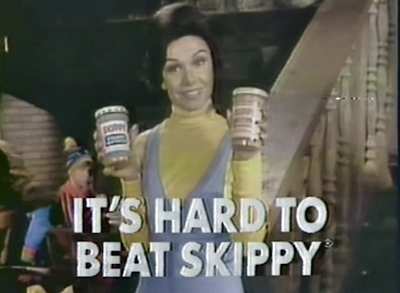