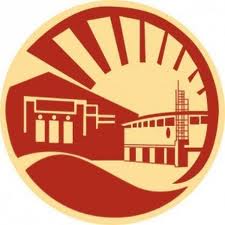 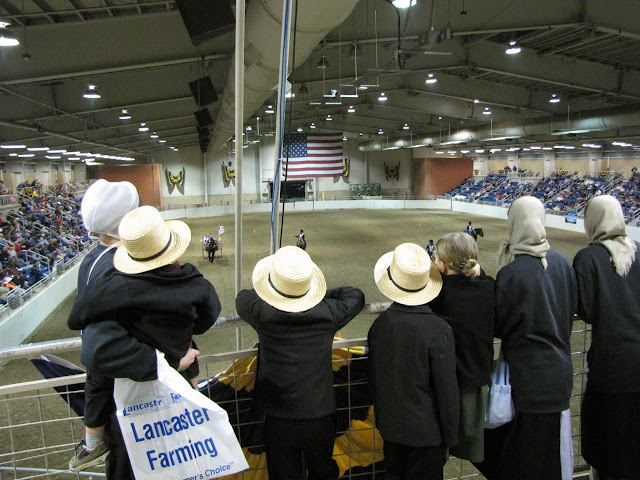 Spectators Crowd the Arena
-----------------------------------------
It was early in January, a new year was now upon us, and as a matter of annual tradition... so was the popular Pennsylvania State Farm Show.  I have lived in Lancaster County, Pennsylvania almost my entire life but somehow, had never been to the Farm Show.  It was something that appeared on the local news broadcasts each year showing various reporters on site, sampling the famous eatables from various food stands, covering the competitive Sheep to Shawl contest, and frequently referencing the foul weather that often accompanies Farm Show week.  Overhearing some co-workers raving about the traditional food favorites of the Farm Show, I was pushed over the edge!  On the spur of the moment one afternoon, I decided to investigate the spectacle in person and grabbed my trusty sidekick to come along for the ride.  Katelyn... grab your gear and your appetite!  It's time for another adventure with dear old dad! 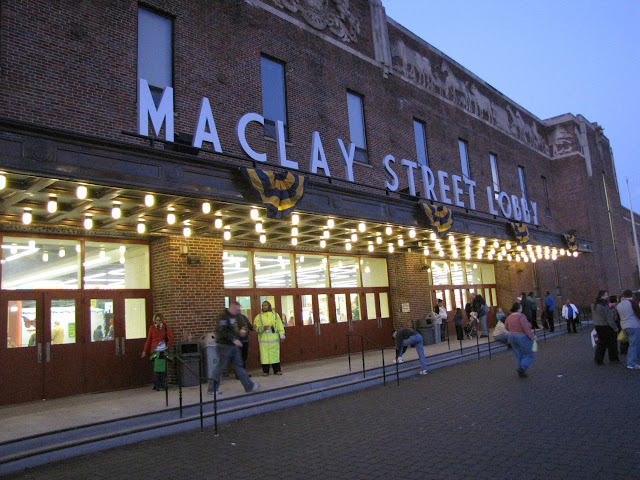 Monument to PA Agriculture
-----------------------------------------
We pointed the mini-van toward the west and with GPS in hand, a couple of Fair Newbies headed off into the sunset to experience the 96th Pennsylvania State Farm Show.  During the drive, I was trying to explain to Katelyn what I thought we might experience during this adventure as she was having a hard time visualizing what a farm show might look like.  I found this to be quite a challenge as I wasn't really quite sure myself.  My explanations were running in circles but ended up as the biggest barn you ever saw in your life with food stands... Her expression was.... well, expressionless.  I tried one more time and explained the Pennsylvania Farm Show had chocolate milkshakes, pork barbeque, potato donuts, fresh cut french fries, funnel cakes, and... oh yeah, I think they have some animals there too.  How's that?  She seemed satisfied... I think. 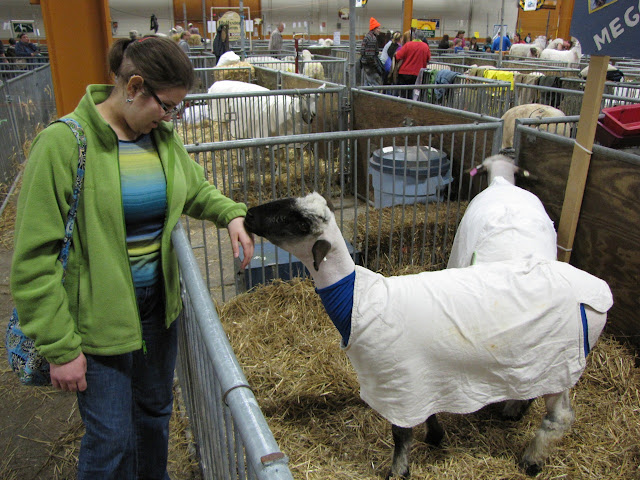 Largest Petting Zoo on Earth
-------------------------------------------
I wasn't quite sure where the Farm Show Complex was actually located.  The last time I was at the complex, I was cheering on our high school basketball team in the playoffs when the school district bussed students all the way to Harrisburg to see the big game in the Main Arena.  Now I was at the mercy of the GPS and once we arrived, I resorted to following the signs and waving police officers to the isolated off street parking metropolis.  The Farm Show was free but it was $10 to park and ride in a school bus to the complex buildings for a drop off right at the front doors of the Maclay Street Lobby.  We parked the car as it started to rain and found a nearby shed that was a designated boarding location.  We took note that we were at Shed # 1 as a bus quickly appeared and stopped briefly allowing people to pour out and then pour back on board.  Clueless, we followed the crowd and found a seat in the back of the damp bus.  Unfortunately, the bus stopped at all seven stops in the mammoth sized parking-lot to repeat the drop off and pick up routine seven times. 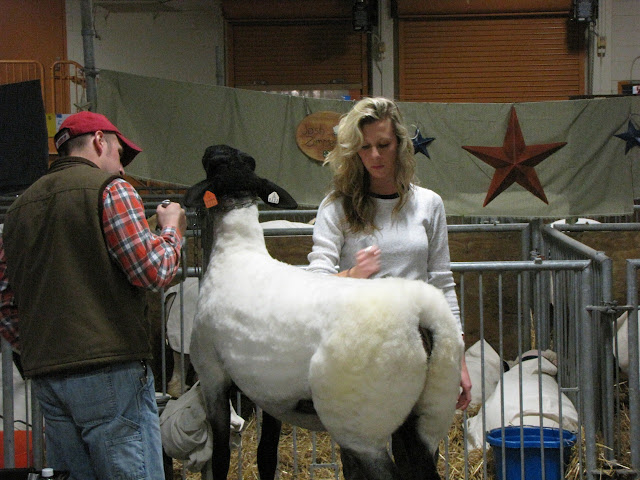 Sculpting a Champion
---------------------------------
The bus crawled along and about a half hour later, we were finally dropped off at the complex that seemed to sprawl outward in every direction.  The ancient red brick building was a monument of strength to the history of agriculture in Pennsylvania, when the bulk of America was composed of a nation of farmers.  The buildings were adorned with concrete facades depicting farm scenes from the rural corners of the state of Pennsylvania.  A few short generations ago, approximately 90 percent of Americans worked the soil to provide the necessities of life for their families.  Since the turn of the last century, the economy of Pennsylvania diversified, adding manufacturing and various service based industries to compliment traditional agriculture.  Today, agriculture is often on a large corporate scale, especially out west, equating to fewer jobs available in farming.  Over the years, a mix of innovation, efficiency, and technology have enabled crop yields to increase dramatically.  In a statistical flip from the past, today only about one in ten Americans earns a living from agriculture.  However, the science of farming has enabled our nation to feed itself and to an extent, become a supermarket to the world. 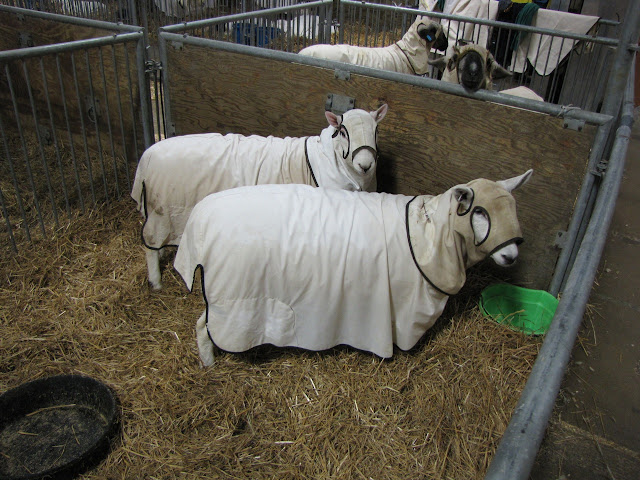 Exchange of Coats
---------------------------
Katelyn and I stepped inside the expansive building that was full of stands displaying all kinds of farm related products.  There was even an enclosed tent you could walk through filled with all kinds of live butterflies.  Maybe later... where's the food?  As an appetizer, we tried all kinds of various free samples of homemade items as we navigated our way through the maze of vendors.  We went through a side door and suddenly found ourselves standing within the Sheep Arena.  I never realized there were so many different breeds of sheep, many of whom were in the process of being trimmed and groomed for the upcoming competition.  Many items handcrafted from their wool were also on display and for sale to the public.  Each breed seemed to produce wool with specific characteristics that distinguished the quality and price of mittens, scarfs, shawls, and everything in between.  Many sheep who had suddenly lost their winter coats to buzzing shears where cloaked in white jackets and matching hoods to keep them warm. 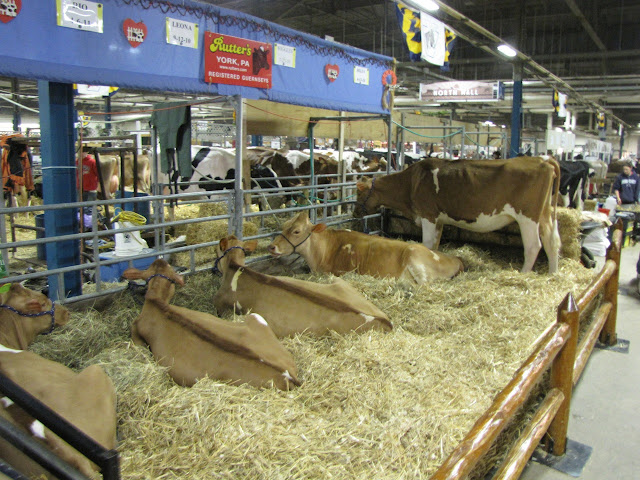 Got Milk?
------------------
Katelyn and I exited the Sheep Arena and thought we had made a circle somehow because we appeared to still be in the Sheep Arena.  However, under closer inspection, the penned animals were all a little shorter and smaller.  Welcome to the Goat Arena!  There was a show circle off to one side where young future farmers were in the middle of having their animals judged in front of the crowd.  There were so many different breeds of goats in attendance they were impossible to count.  The baby goats known as kids were the cutest animals we encountered at the Farm Show.  Thankfully, we successfully resisted the urge to bring one home!  We soon exited the Goat Arena to look for the elusive food stands.  However, instead we entered the Dairy Cow Arena and quickly became acquainted with over 300 Jerseys, Brown Swiss, Milking Shorthorns, Ayrshire and Guernsey Cows.  They looked very comfortable lounging in beds of straw munching on hay.  Ok, now that we familiarized ourselves with the source... where were the milk products?  Like the famous milkshakes everyone was talking about, for instance?  Come on man! 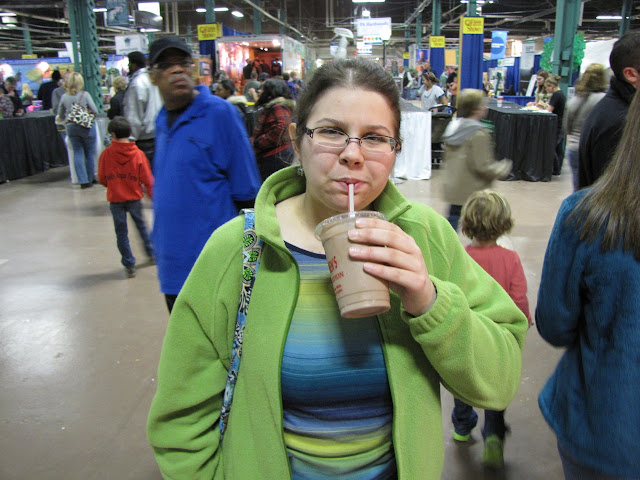 Got Milkshake?
-------------------------
So far we had yet to encounter a single food-stand and were now on a quest determined to find the prize.  We headed back toward the vendor section where we first came inside the complex and finally found a few food venders, including the famous milkshakes made by the Pennsylvania Dairymen's Association.  Katelyn grabbed a chocolate milkshake, while I grabbed a hot sausage sandwich next-door from the Pennsylvania Livestock Association.  We topped it off with some delicious fresh-cut french fries from the Pennsylvania Cooperation of Potato Growers stand.  Good Stuff!  Now that we had satisfied our essential primal needs... for the moment, we went off to find the horses and to see what festivities were on the agenda for the evening.  Along the way we passed by approximately 1,300 rabbits and 1,500 chickens on display in rows of cages stacked three high.  It resembled a grocery store of aisles stocked full of little living critters! 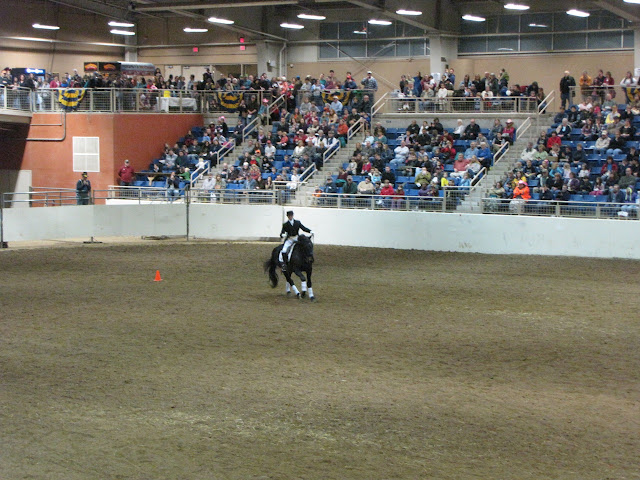 Show Horse Dance
-------------------------------
Katelyn and I began to follow a growing crowd through a long hallway who all seemed to be in a hurry to get somewhere so we decided to tag along.  We wound up going up an escalator to a second level concourse that passed by the entrance to the Main Arena of the Farm Show Complex.  The procession of pedestrians continued onward toward the Equine Arena where the stadium seating was filling up with spectators.  We took our seats and watched a group of riders perform a horse show with a patriotic theme to accompanying music to the delight of the enthusiastic crowd.  We watched several acts of the Equine Showcase and then decided to see what else we could find to spark our interest... like something more to eat, for example!  We retraced our steps back toward the North Hall in search of more of the famous Farm Show food and landed within a different section of the Main Hall where prize winning fruits, vegetables, and flowers were on display.  Lots of food products but nothing processed or cooked! 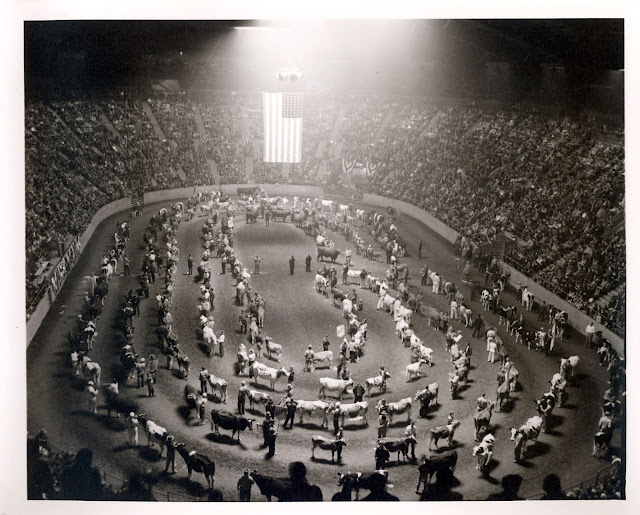 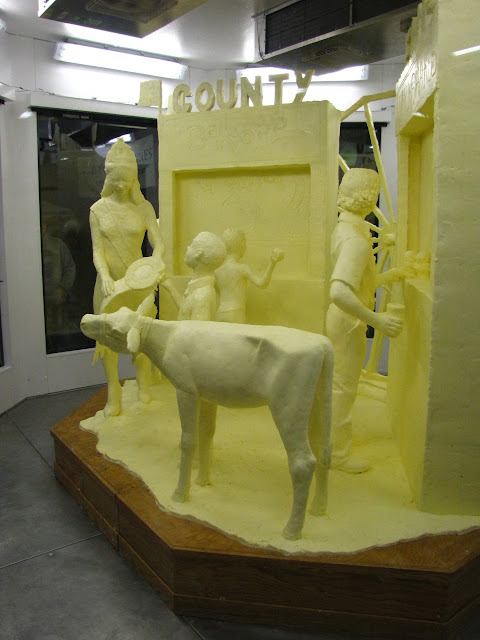 Butter Sculpture 2012
-----------------------------------
The main attraction in the Main Hall was the enormous butter sculpture proudly on display front and center.  This year the ever changing agricultural themed butter mold settled in the form of a scene depicting a young 4H member proudly accepting a ribbon award for his prize winning calf.  Several other figures and a large spinning wheel were also present within the 1,000 pounds of sculpted butter.  The butter sculpture theme honored the 100th anniversary of both the Pennsylvania 4H Club and State Association of County Fairs.  It was really amazing and... a little gross!  I looked around the surrounding perimeter for an awaiting giant English muffin and super-sized knife but none were to be found.  However, the butter didn't go to waste as it was later recycled into green energy at a local dairy farm in the form of bio-fuel.  We were physically out of energy ourselves and headed toward the awaiting bus just outside.  Fortunately, parking our car at the first stop meant we were dropped off first and were soon exiting the enormous parking lot and driving homeward bound. 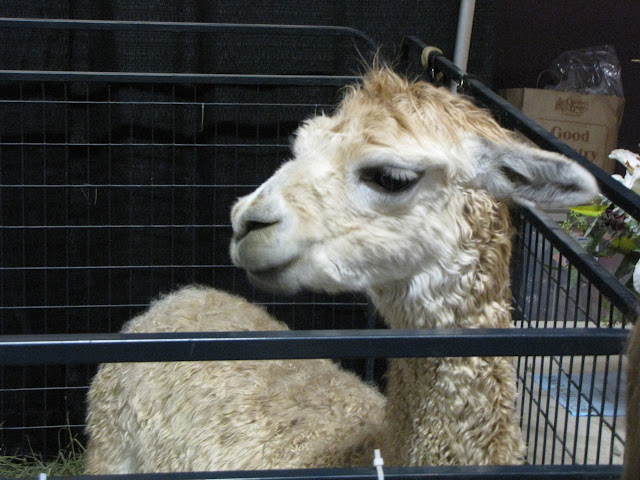 Friendly Alpacca
---------------------------
The next day everyone was quick to ask about my first experience visiting the Pennsylvania Farm Show.  The subject which came up first, of course, was the famous food and what items we consumed.  I had to admit that we didn't have much success in the food department and even came home a little hungry.  As I soon found out, we had completely missed the main Food Court Arena that was located next to the Equestrian Arena!  We should have continued exploring down the concourse hallway after the horse show instead of retracing our steps back to the North Hall.  We fell one building short of discovering the main attraction exhibit dedicated to the popular food items prepared by the dozen Agricultural Commodity Organizations in attendance.  Can you say Epic Fail?  As a teacher, I should know to do my homework and to be prepared but that is what happens when you throw caution to the wind and dive into an adventure on the spur of the moment!  Our saving grace is the Farm Show is an annual event and next year we plan to start on the opposite end of the complex and hit the Food Court Arena first and then again last, before departing with full stomachs! 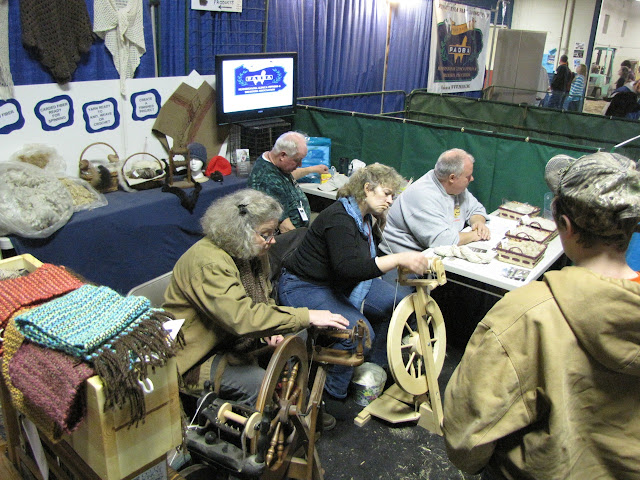 Spinning Wool into Yarn
-----------------------------------
Despite our food fumble, the Farm Show was a great experience that Katelyn and I both enjoyed very much.  The animals were the true star of the event and are rotated on display by breed throughout the week.  Next year we plan to visit on a different day to see some of the animal categories we missed and will be sure to bring a site map and event schedule along as essential gear!