Free Styling in the Big Apple 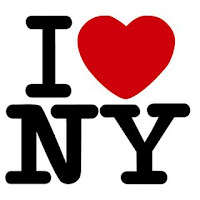 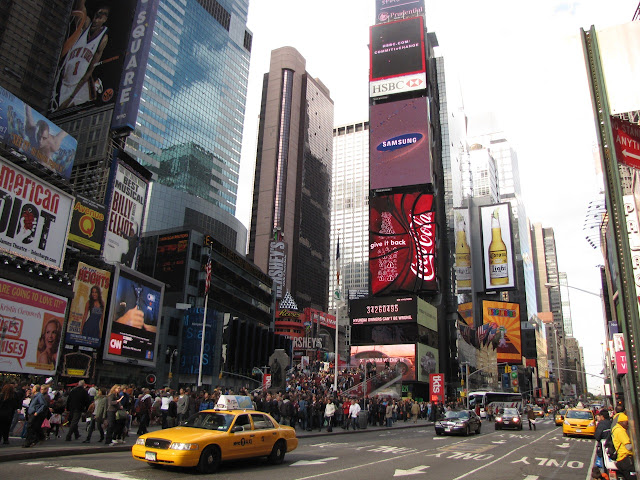 Times Square / New York City
----------------------------------------------
Katelyn and I love New York and usually head to the Big Apple via the $75 a seat tour bus trip.  I like the tour bus trip option because you can just sit back and let the stress of driving to someone else.  The only problem is you have to order your tickets well in advance and if someone gets sick or the weather turns foul, you are pretty much stuck.  Some good friends of mine suggested trying the Park and Ride option!  What's that?  Well, you drive your own car to the edge of New York City, you pull into a Park and Ride parking lot in New Jersey, and then take a city bus through the Lincoln Tunnel that soon drops you off at the Port Authority Bus Terminal inside the city.  Wow, that sounds easy! 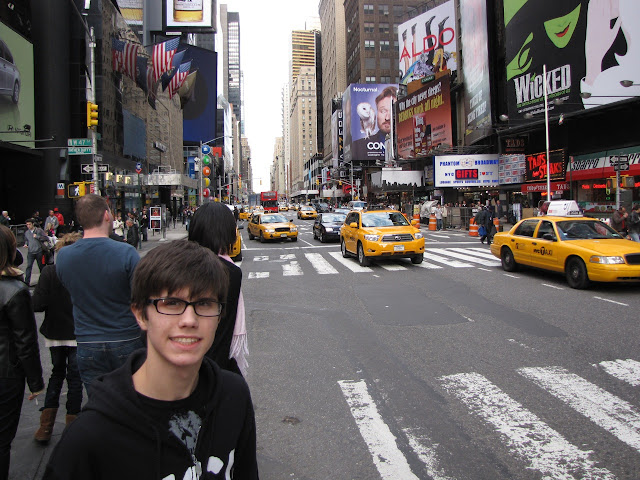 Tyler's First Time in Times Square
----------------------------------------------------
My son Tyler had never been to New York City and we were anxious to show him some of the highlights of the Big Apple.  Since it would cost about $300 to reserve seats with a tour bus company for a do-as-you-please visit for our family of four, we decided to try the Park and Ride method to see how the process worked out.  We had really good directions printed out and navigated our way through Pennsylvania and most of New Jersey with ease.  Since this was our first time and we really didn't know what to expect, we were descending into the highway labyrinth outside New York City somewhat blind.  Our route seemed to twist and turn with exit and on ramps on both sides of the six lane roadway.  Somewhere we zigged when we should have zagged and wound up going the wrong way.  We knew it instantly but trying to turn around... As they say in Jersey... Forget about it! 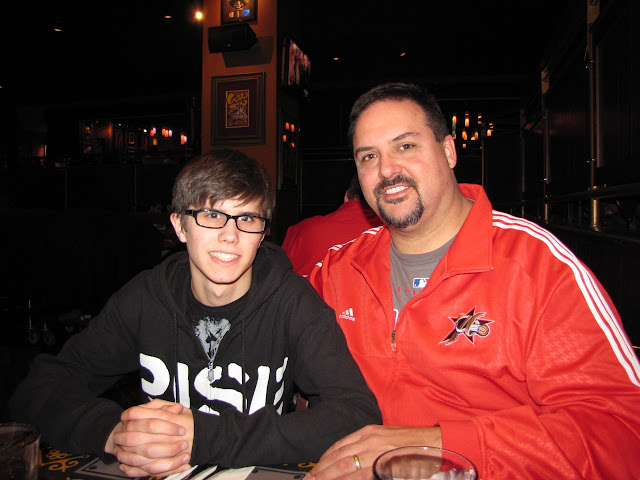 Lunch at the Hard Rock Cafe
----------------------------------------------
We somehow wound up heading towards the Meadowlands Sports Complex with New York City skyline visible off to our right.  It was a Saturday and with our dumb luck the Meadowlands was hosting the annual Army versus Navy college football game!  Within minutes we were stuck in the game traffic!  Eventually we arrived at the complex and were the only car that headed directly for the exit / on ramp to get back on the roadway heading the opposite direction.  Soon we were back in the highway maze and finding our original desired target route was far from easy.  We wound up getting on and off various highways multiple times that led to a two hour detour.  Finally, we got back on track and eventually the sign for our Park and Ride lot came into view!  Touchdown! 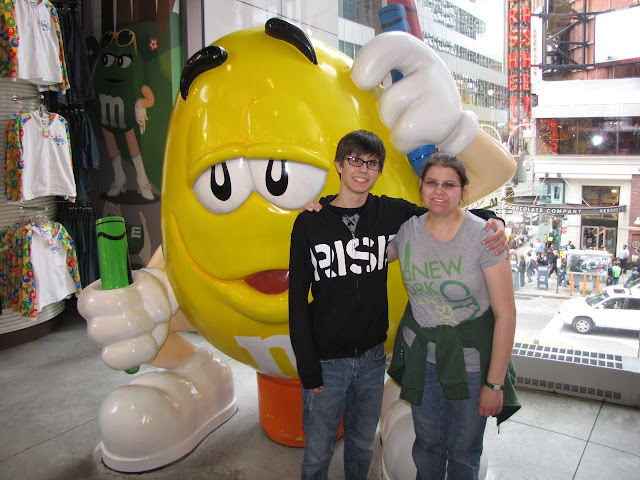 Katelyn and Tyler at the M&M Store
-------------------------------------------------------
We followed the signs and were soon dumped into the parking lot.  It wasn't as big as I had imagined but there were many spaces available to choose from.  There was no parking lot attendant to contend with so we pulled in a space and shut her down, unloaded our gear, and triple checked that we had everything... especially our car keys and wallets!  There were a few other people about and they were making their way toward a small rectangular building that housed bathrooms and several large vending machines for bus tickets. The building was located under a big iron bridge that hummed with the busy traffic above coming to and from the city.   We got some pointers from a friendly couple that were veterans of the process and soon we had our round trip tickets to the city.  We then went outside and sat on a bench to wait for the arrival of the city bus.  It didn't take long before one pulled in for us to board since a sign advertised their arrival about every 15-20 minutes. 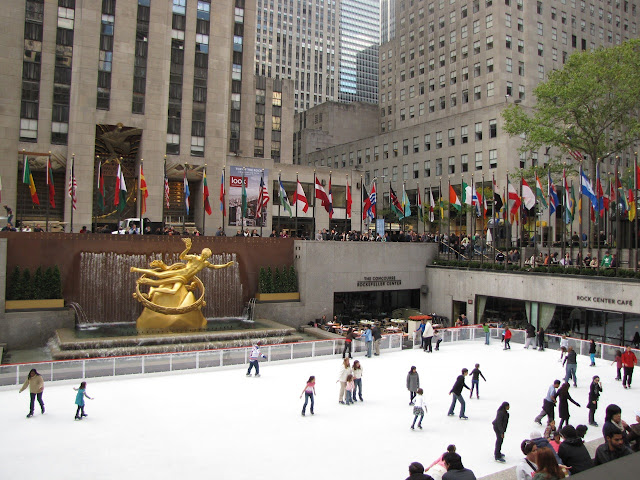 Ice Skating at Rockefeller Center
--------------------------------------------------
We boarded the bus and were soon on our way crossing the iron bridge that was above our heads a few minutes ago.  One of the big savings to the Park and Ride is you get the bus before the Lincoln Tunnel and as a result, don't have to pay the expensive toll.  We ventured through the tunnel that travels under the Hudson River without catastrophic incident and emerged back out into the daylight within the highrise concrete structures of the city.  The bus pulled into the Port Authority Bus Terminal and we were soon exiting the bus taking note of the number of the stop, which was also our point for re-boarding when we were ready to leave the city later that day.  It is also important to know the time of the last bus to the Park and Ride lot for the day so you don't wind up stranded inside the city!  However, the last run during our visit was 1:00 in the morning!  I think we will be ok... 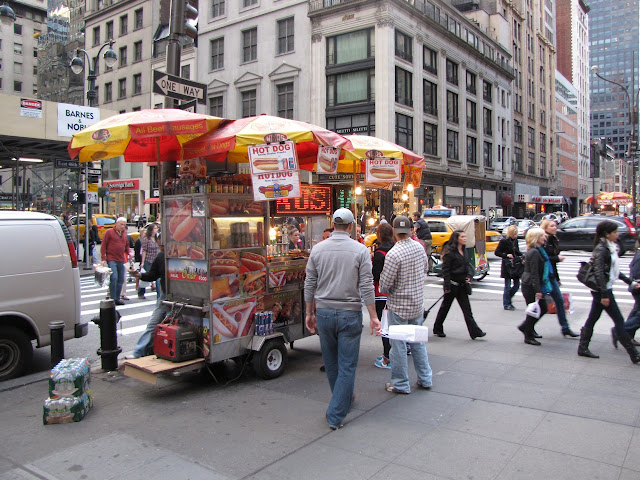 Street Vendor on Broadway
-----------------------------------------
The Port Authority Bus Terminal is a great central point to be dropped off in the city since it is close to the Theater District on Broadway with Times Square a short distance away.  We took in the bright lights, tall buildings, sights, and sounds of the busy streets.  I could tell it was a little overwhelming for Tyler who had never experienced such a spectacle before!  He appeared a little shell-shocked!  We decided to get lunch and agreed to try something that would be a new dining experience for all of us... the Hard Rock Cafe on Times Square.  It was more than cool and right up Tyler's alley with walls of electric guitars, golden records, and framed memorabilia from Rock and Roll history.  We were soon seated at a table below a fully framed white suit worn on stage in London by drummer John Bonham of Led Zeppelin.  It's true... A cheeseburger does taste better when consumed within full view of a rock legend's pants! 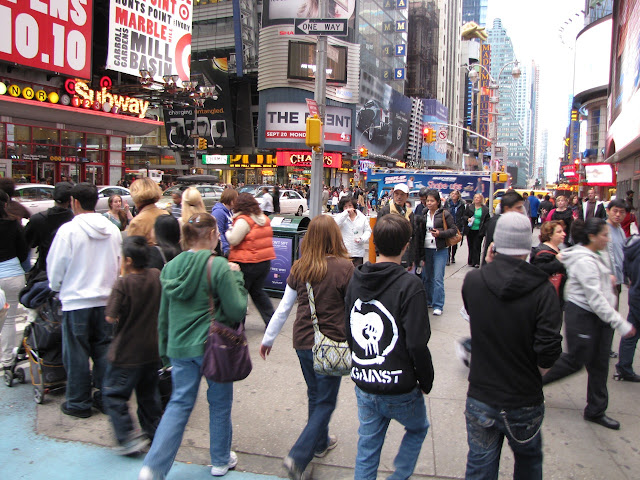 Getting Lost in the Crowd
--------------------------------------
After a great lunch it was time to see the sights!  We made a quick tour of the gigantic Toys R Us across the street, made a visit to the M&M store, found Rockefeller Center to see the ice skaters, and checked out the exterior of Saint Patrick's Cathedral.  It is impossible to see everything and as a result, my game plan is usually to pick a section of the city and explore it in depth rather than try to run through a preconceived list.  If you have a long list of places to visit, you might wind up spending the bulk of your time traveling from place to place.  Pick a district and make a list of short jumps within that area using a good travel map available at any news stand in the city.  If you have a long distance to travel, a cab is the best and quickest way to get from point "A" to point "B" if you are willing to spend some cash.  You can travel from one end of Manhattan to the other for about $20 with tip.  In my opinion, taxi travel is preferred over the complex and somewhat scary subway tunnels beneath your feet. 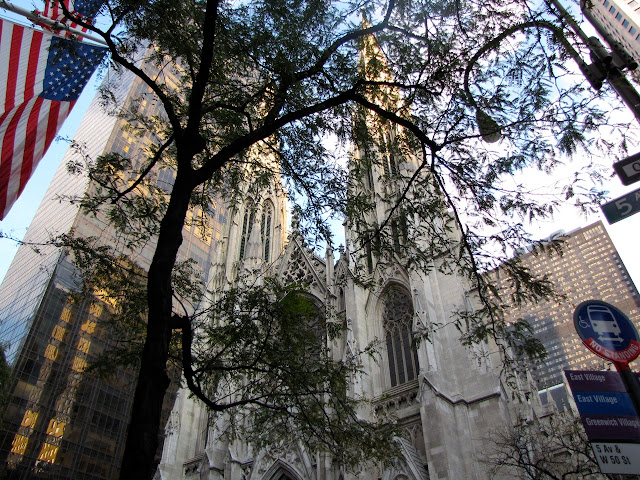 Saint Patrick's Cathedral
---------------------------------------
It doesn't take long to get exhausted walking around the Big Apple and after a while, we all became overwhelmed by the pace, people, and stimulation.  Unless you are in Central Park, there are few places to sit down unless you want to be seated in a cafe or restaurant.  At one point Tyler and I just took a seat on the sidewalk and watched the hustle and bustle pass us by, while the girls checked out yet another store.  We were all reaching the saturation point and it was starting to get late so we began to make our way back toward the Port Authority Bus Terminal.  We arrived at our boarding stop along with a lot of other weary tourists who were plum tuckered out!  The bus soon showed up and took us back to the Park and Ride parking lot as advertised.  We jumped in the car and headed back out into the busy maze of roadways! 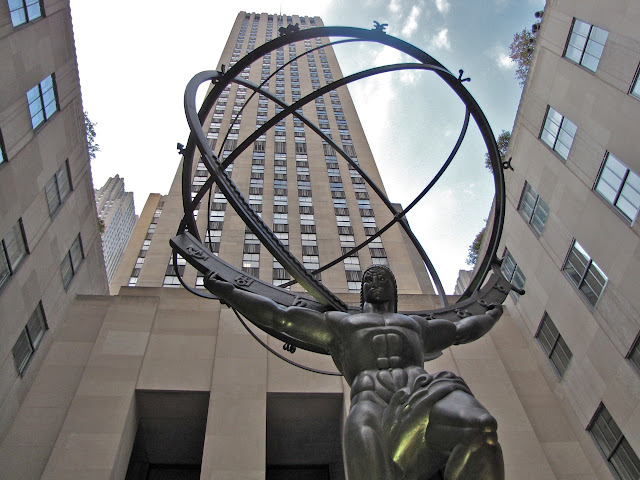 Atlas Sculpture / Rockefeller Center
-----------------------------------------------------
The traffic getting out of the city was bumper to bumper and I decided to follow the GPS instructions instead of our written directions... I thought it would be easier but it led us through a construction zone that involved stop and go traffic for most of the trip through New Jersey.  Oh well, you roll the dice, pick your path, and then live with the consequences!  It wasn't that bad.  Despite our two-hour hick-up on the way up, the Park and Ride option will be much easier now that we know what to expect and have a better idea of how the process works.   The Park and Ride option gives you the flexibility to travel to New York City on the spur of the moment without committing to a tour bus company weeks in advance.  We were also able to travel at our own pace and make pit-stops whenever we wanted to take a break from the road. 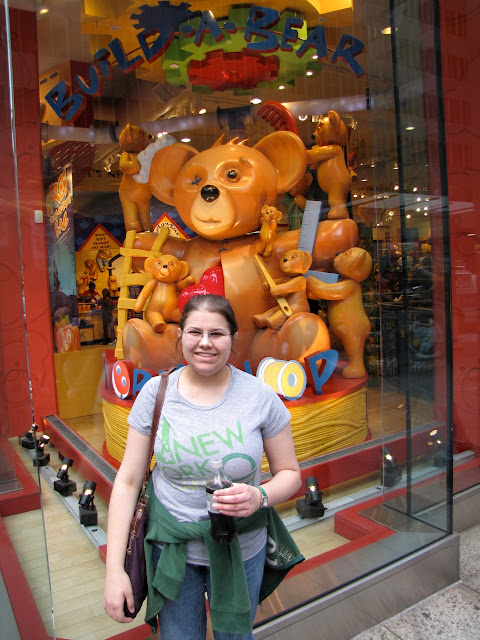 All in all, we had a great day!  So... Next time you are in the mood for some Bright Lights / Big City give the Park & Ride a try.  Good Luck and Godspeed! 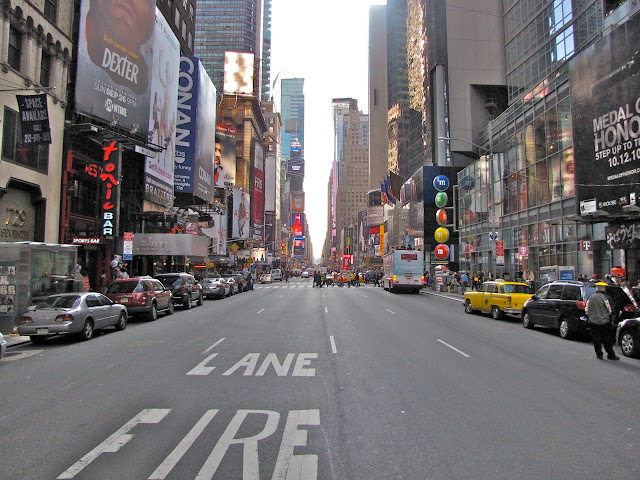 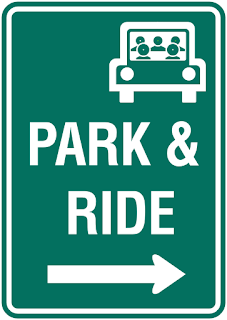