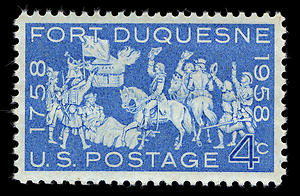 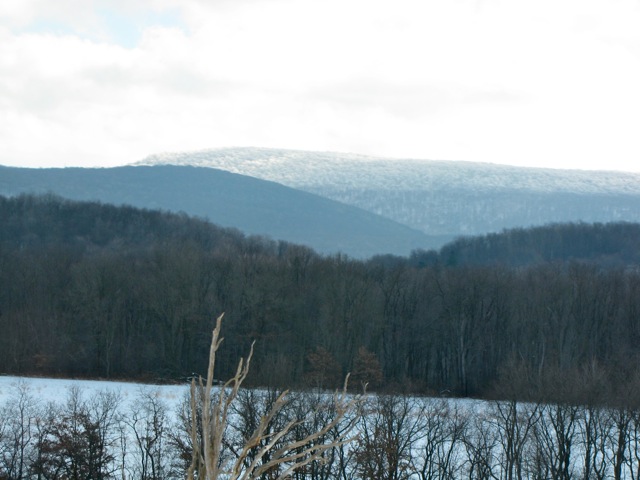 The Allegheny Mountains
-----------------------------------------
The colonization of North America was well underway when the nation of France decided to jump in the game and attempt to grasp a piece of the New World.  As a result, the only slice of the pizza left for the taking along the Atlantic was the cold un-tillable wedge of Canada.  Nonetheless, the French explorers of Verrazano, Cartier, and Champlain laid claim to the northern fringe of the continent above the Great Lakes region.  To their south, the English were well entrenched in the rich soil of the 13 colonies from New England in the north to Georgia in the south.  However, unlike their English rivals, the French would not see an influx of new colonists from Europe to settle the land.  The short growing season and infertile soil made farming almost impossible.  Despite the failure of agriculture, New France would carve out an economy rich in fish and furs that would benefit the mother country and make it heavy with thirst for more. 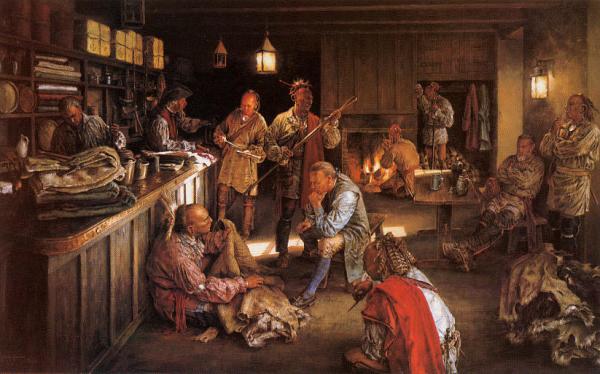 Winter Trade
(Painting Credit / Robert Griffing)
------------------------------------------------
In the early years, the few hearty souls who made the crossing into New France were mostly rugged adventurous mountain man types who penetrated the interior of the continent in search of wealth.  They came into contact with the Native Americans and developed strong trade relationships with various tribes.  The rich beaver pelt trade began to benefit both parties in the exchange of guns for furs that the native people viewed as the tool of the future.  It might seem foolish to trade a weapon to a rival people that claimed the same land you occupied, but there was a method to the madness in favor of the French.  The Native Americans received flintlock muskets for their fur harvest but had no way to manufacture the black powder or musket balls to fire them...  Unless they continued to trade with the French to get them.  The gun trade enabled the French to cement a long term economic trade relationship with the Indians that would later evolve into an alliance in the future French and Indian War with the British over the Ohio Valley. 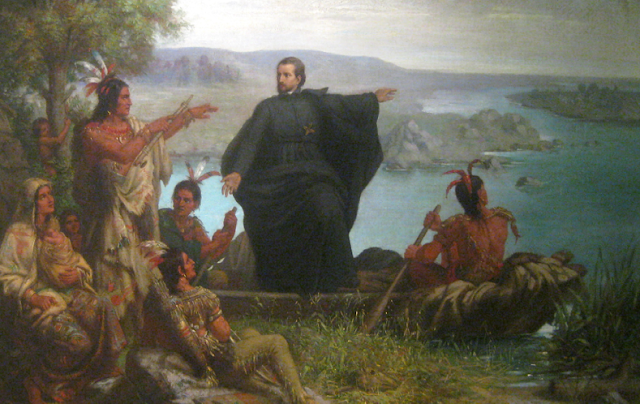 Marquette and the Indians
(Painting Credit / Wilhelm Lampwrecht)
--------------------------------------------------------
In 1673, the exploration team of Marquette and Joliet descended south out of Lake Michigan and soon crossed over land in a short portage to the upper limits of the Mississippi River.  The team continued with the current south laying claim to the lands on both banks until they reached the mouth of the Arkansas River about 400 miles short of the Gulf of Mexico.  In a sense, the French had done an end-around run of the English colonies and boxed them in with the Appalachian Mountains providing a natural barrier of defense.  The French knew how valuable the land was that Marquette and Joliet had claimed... especially, the tropical climate to the south that could support cash crops like the profitable tobacco known as Green Gold.  An economic and political dance would soon follow later erupting into violence on both sides of the Atlantic Ocean. 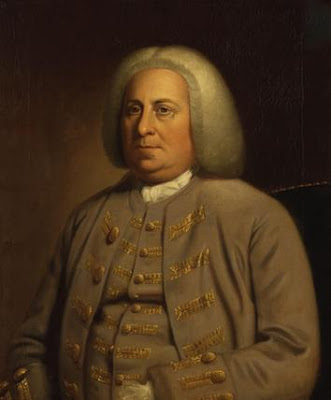 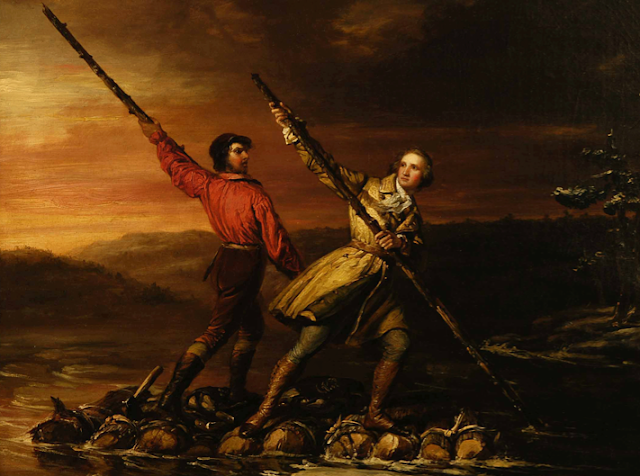 Washington and Gist on the Allegheny River
(Painting Credit / Daniel W. Huntington)
----------------------------------------------------------
On the way back to Williamsburg to deliver their findings, the weather took a turn for the worse.  The biting teeth of winter had gripped the wilderness of the Ohio Valley.  At one point, their raft overturned crossing the freezing Allegheny River throwing George Washington into the frigid water.  Christopher Gist was able to pull Washington from the river before he was swept away by the icy current and saved his life.  It was a miserable 500 mile journey back home to Williamsburg.  In the meantime, the French now knew the English would take action and decided to beat them to the punch by securing the Forks of the Ohio.  Fort Duquesne was the result of their efforts and would become one of the key targets the British set their sights on during the brewing conflict.  The oncoming French and Indian War would decide what foreign nation would control the continent.  It would become the first true world war with nations fighting on both the eastern and western hemispheres. 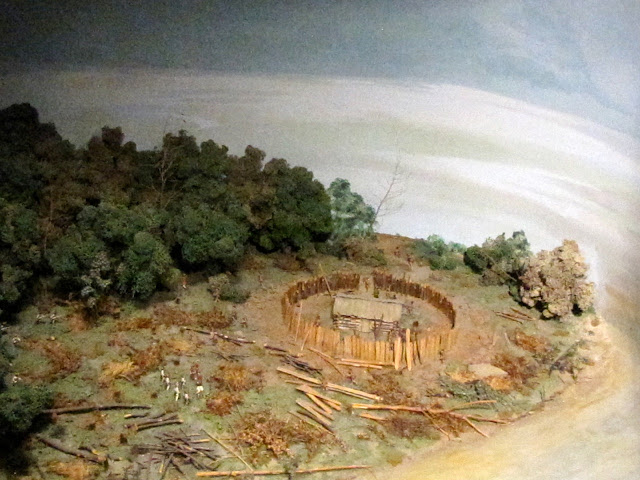 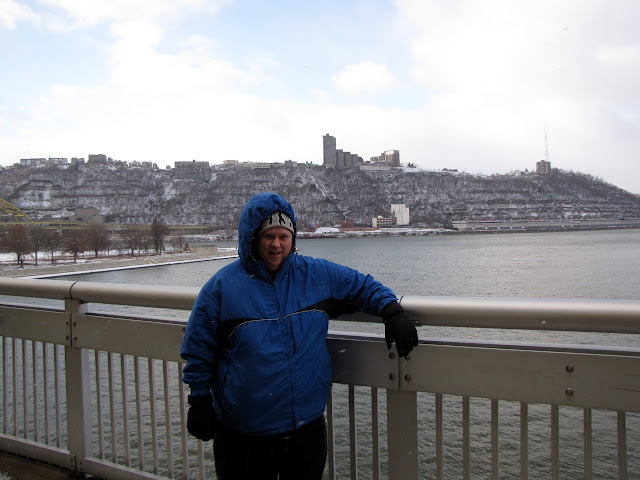 Fort Duquesne was not the best suited position for a fortress, despite the geographic importance of its location.  The site is shadowed by the steep incline of Mount Washington that would have meant disaster for the French if the British could occupy the surrounding high ground.  An artillery assault by the English from the heights would have pounded the fort and its inhabitants to dust within an hour.  General Edward Braddock came within a few miles of the fort but ran into an ambush that turned the British advance into an abrupt retreat at the Battle of the Monongahela.  General Forbes followed the game plan of Braddock three years later by building another road west but much more cautiously.  His slow advance gave him time to turn the Indian allies of the French to the British side with gifts and hollow promises.  Without their Indian alliance and with General Forbes within striking distance, the Forks of the Ohio were abandoned by the French without a fight.   Fort Duquesne exploded in the night within earshot of the British Army, destroyed by the retreating French garrison who set delayed charges to explode the gun powder magazine in the fort's center. 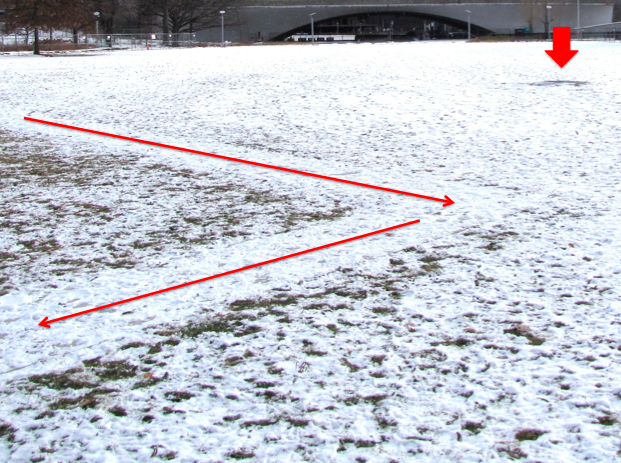 Outline Walls of Fort Duquesne
--------------------------------------------------
I was so excited to finally be within reach of "ground zero" of the French and Indian War in Pennsylvania!   Today the site is contained within Point State Park where the original walls of Fort Duquesne are outlined in brick to show the four pointed star shape of the fort's design.  However, all we could see was an open space covered by snow.  We ventured into the field to explore, unable to see anything of interest until we stumbled onto a large metal medallion (Arrow Pointing Down) in the middle of the space marking the center of Fort Duquesne.  From there we were able to navigate our way to the far edge of the open space and finally found snow evenly covering a smooth surface. We had found the outline of the fort's walls (Long Arrows) and pushed the snow aside to reveal the sharp twists and turns of the triangular gun mounts.  We had discovered the fort... mission accomplished! 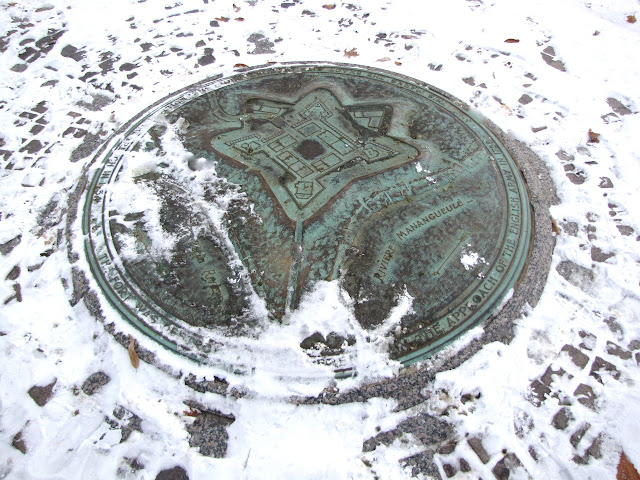 Center of Fort Duquesne
--------------------------------------
Please join us next time when we switch gears to cover the second half of the history of the Forks of the Ohio during the French and Indian War when the British occupied the site and built a new and larger stronghold called Fort Pitt.  We will also explore the Fort Pitt Museum.  Until then, we are off to Primanti Brother's once again to partake in the local cuisine!  As the French say... Bon Appetite! 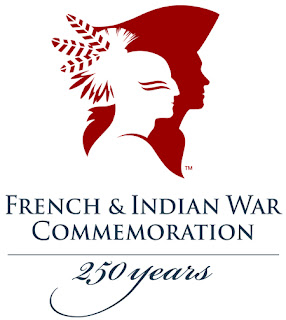