Boating on the Susquehanna 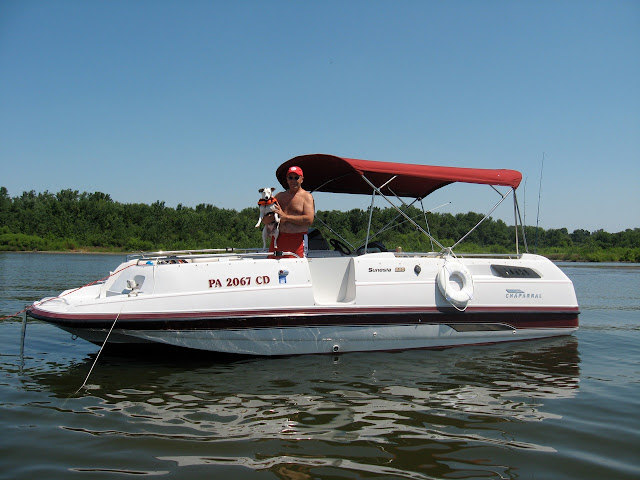 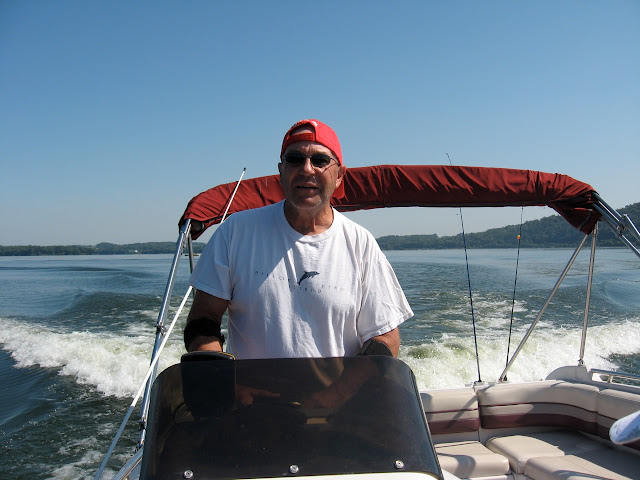 Captain Mattern at the Wheel
-------------------------------------------
We jumped in John's SUV that was loaded with snacks, drinks and various boating gear.  We made the short trip up to Wrightsville on the western side of the Susquehanna River in York County.  He had his beautiful boat stored at the Long Level Marina located on shore of Lake Clarke.  The lake was created by the Safe Harbor Dam, which was built in 1930 during the Great Depression.  The concrete gravity dam flooded the upper Conejohela Flats to store water for the nearby power station that generates hydroelectric power.  Over the years, the 11.5 mile artificial lake has become a focal point of water recreation for thousands of visitors annually.  Ahoy' Matey... We were about to join the ranks of recreational boaters of Lake Clarke! 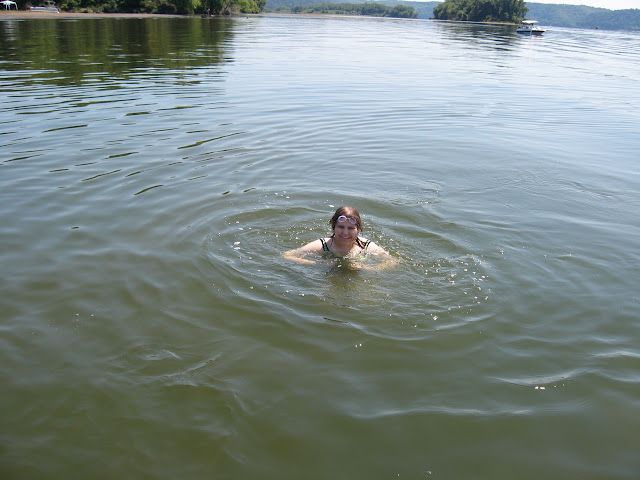 Katelyn Susquehanna Swimming
------------------------------------------------
We found John's boat parked in the storage yard and prepped the boat for action.  We unsnapped and removed all the protective coverings on the boat and loaded our gear from the car.  A phone call prompted a tractor to arrive that picked up the boat's trailer and pulled it to the boat launch.  It was filled with fuel and then backed into the lake with all of us already on board.  The engine came to life and we backed off the trailer.  We were now free to cast off on our adventure.   The star of the crew was John's dog Emmy who was a veteran of many voyages.  She was a Jack Russel Terrier who was all decked out in a bright florescent orange doggie life preserver.  She seemed right at home on the boat and kept us all entertained as we raced across the water. 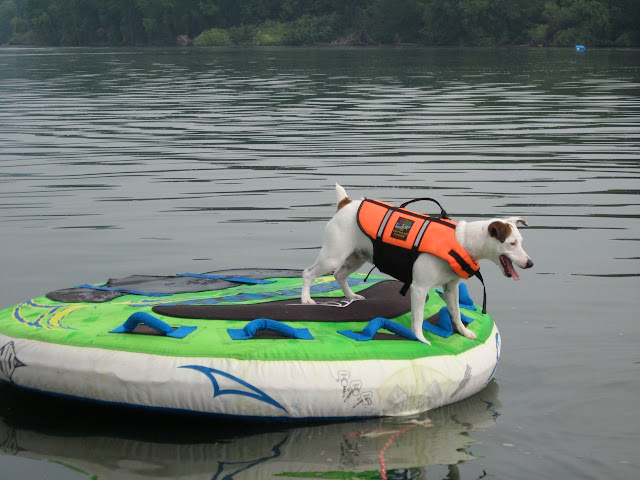 Emmy on Lifeguard Duty
--------------------------------------
Lake Clarke was beautiful, a wide open space of water that was flanked on both sides by tree covered hillsides.  We journeyed across the lake to a sandbar called Shad Island that provided a beach for recreation activities.  We pulled the boat just off shore of the sandbar and dropped anchor.  Now it was time to jump overboard and swim in the river.  As I expected Katelyn and Tyler were not so sure this was a good idea.  However, Emmy jumped off the boat into the water and climbed aboard her own inner-tube raft giving us all courage.   We slowly slipped into the dark water and were all soon swimming in the Susquehanna.  Katelyn and Tyler quickly adapted to the river and were even doing hand stands and swimming to the shore to explore the limits of the sandbar.  It was a great time! 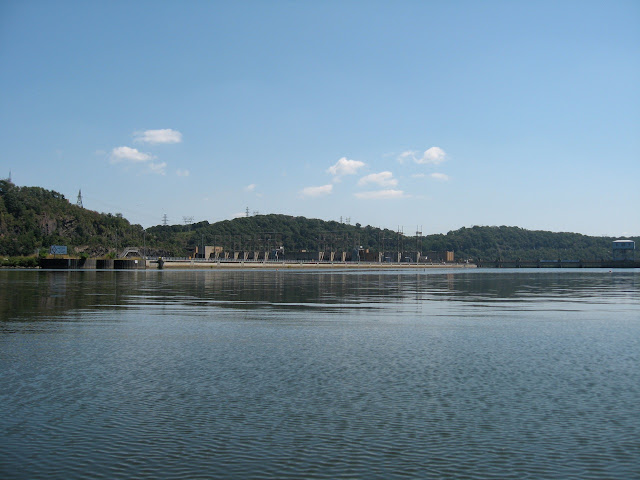 Safe Harbor Hydroelectric Dam
------------------------------------------------
Soon it was time to re-board and pull up anchor to set sail once again.  John wanted to give us a tour of the lake and cruised us down to the Safe Harbor Dam at top speed, which was a great way to dry off!  The hydroelectric dam had a super highway of electric wires extending outward and over the hillside to the power station.  Rail-lines paralleled the eastern shore where streams flowing into Lake Clarke became problematic for train traffic.  The problem was solved by building large metal toughs above the train tracks into the hillsides where the stream water was caught and carried over the tracks and dumped into the lake.  One way or another, there was room for all at Lake Clarke. 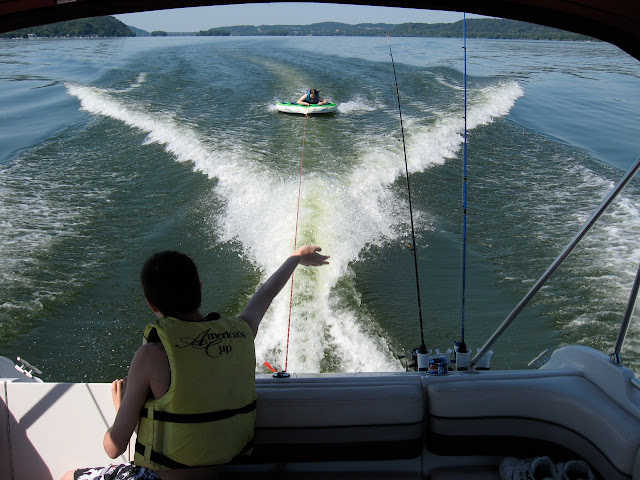 Water Tubing Across the Lake
--------------------------------------------
Next on the agenda was the highlight of the trip, water tubing at high speed via boat!  I decided to sit this one out!  The kids however had the time of their lives.  From a distance I wasn't sure if the kids were screaming from terror or excitement?  It wasn't until we reeled Katelyn in to see how she was doing... Her one word response... Awesome!  Tyler was next and being lighter bounced up and down as the boat opened up near top speed.  He needed to hold on tight to stay aboard the tube as he had the ride of his life!  I continued to sit this one out.  I envisioned the boat at full throttle going nowhere and the engine overheating and burning up!  Maybe next time?  Anyway, Emmy kept me company, she likes her inner-tubes on the water stationary just like me! 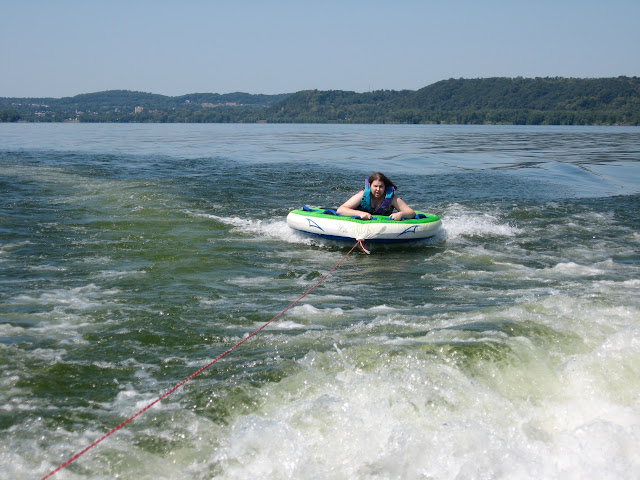 Katelyn Taking Off
----------------------------------
The final activity of the day was one that I could handle with ease... floating in the middle of the lake with the life jacket on.  I can do that!  It was fun and very relaxing with the temperature of the current changing from very cold to warm every few seconds.  It was very therapeutic!   A storm looked like it was brewing up to the north as the sky turned dark with clouds so we all got back on board.  John piloted his craft back south toward the dam away from trouble and the storm did not affect our voyage.  After zipping around the lake a few more times it was time to head back in to the dock.  Tyler had the privilege of driving the boat back toward the Long Level Marina at a fast rate of speed.  In the mean time, John called into the marina dispatch office to announce his approach and intention of removing his boat from the lake.  Tyler was in his glory, sporting a serious expression of confidence as an experienced mariner of the high seas as he skillfully maneuvered his craft toward our destination. 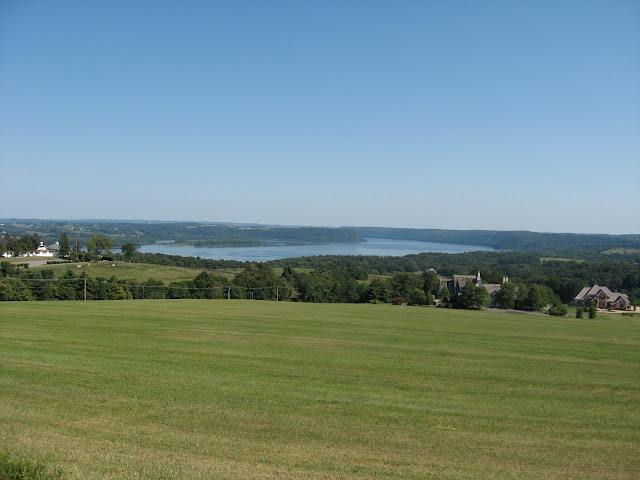 View of Lake Clarke from Wrightsville
----------------------------------------------------------
Thankfully John took back the wheel of the boat as we approached the boat ramp and Tyler was once again in the real world.  A tractor with the boat's trailer was awaiting our arrival as John navigated his craft with precision onto his trailer, which was partially submerged in the lake.  We were soon pulled out and a marine employee pushed over a step ladder to make our dismount easy and without injury!  We ventured inside the boat shop to use the facilities and purchase some drinks for the ride home.  There was everything you could ever need for a boat for sale inside the store.  We walked with Emmy on a leash across the road to where the SUV was parked and John's boat was once again dry docked in its reserved storage space.  We spent the next half hour unloading our gear and re-securing the protective cloth coverings to keep the boat's interior spaces protected from the elements.   Soon we were on our way back home. 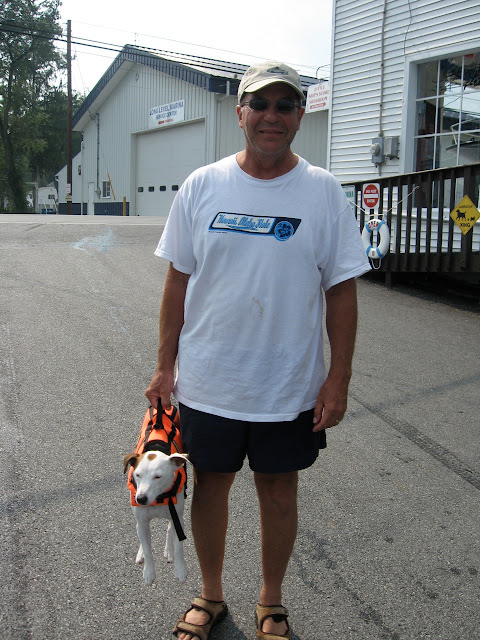 Limit / One Carry-on Please
----------------------------------------------
A big thank you to John and Emmy for a memorable day on the Susquehanna River!  It was a great time and the kids had a blast and were anxious to know when we could embark on our next voyage!  I was pleasantly surprised as Katelyn and Tyler threw caution to the wind, relaxed, and tried some new activities they wound up really enjoying!  Thank you Coach Mattern! 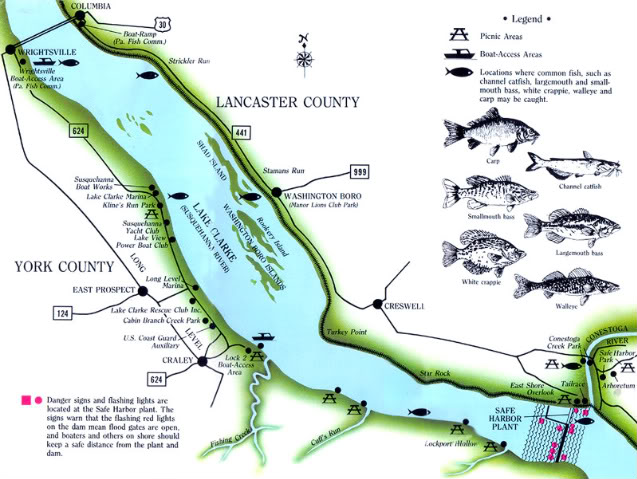