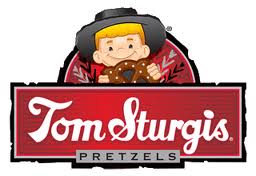 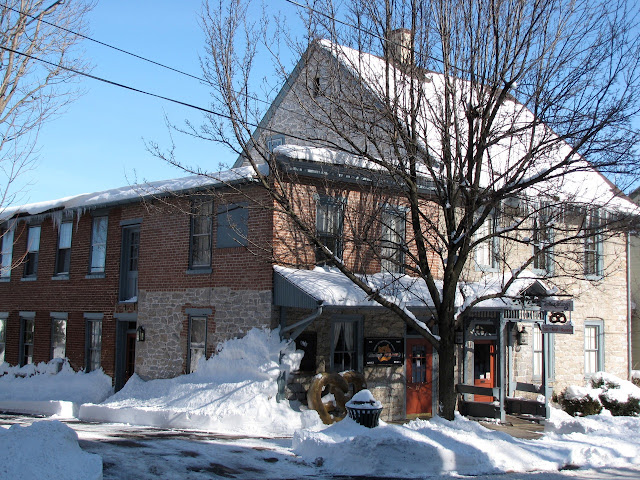 Lititz Pretzel Factory Original Bakery
---------------------------------------------------------
Americans love their salty snack foods and the key rival to the potato chip was first commercially produced in my home town... Lititz, Pennsylvania.  The pretzel was probably first created somewhere in Europe.  There are even claims that it was invented by Native Americans.  Our first known recorded reference goes back to 610 A.D. where an Italian monk created the treat as a reward for children who successfully learned their prayers.  He named the treats prestiola, the Italian word for little reward.  The traditional unique twisted knot shape is thought to mimic folded arms across the chest, the wings of angels, or even the shape of the Christian Holy Trinity symbol.  It is thought the three holes created by the twist may represent the three images of God, coexisting and connected as the Father, Son, and the Holy Spirit.  Whatever the shape resembles or represents, the true implied meaning is open to broad interpretation.  However, the one thing everyone can agree on is the fact that pretzels are delicious! 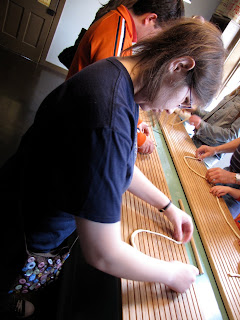 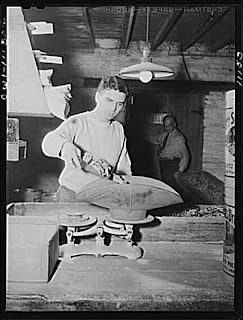 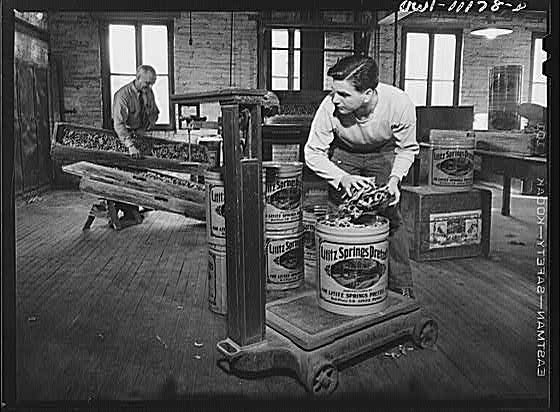 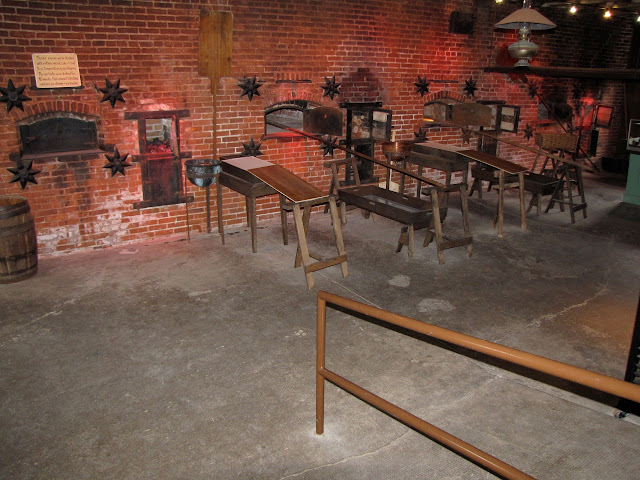 The Original Brick Fired Ovens
-----------------------------------------------
Julius Sturgis is credited with changing the industry by going away from soft pretzels and developing a crispy hard pretzel.  His hard pretzels were smaller in size but had a much longer shelf life of freshness due to their dry texture.  The new style of hard pretzel enabled Sturgis' famous pretzels to be shipped to customers throughout the area, causing product sales to continue to grow.  In 1936 Tom Sturgis, the great grandson of Julius, moved the operation to a much larger facility outside Reading, Pennsylvania where the family tradition continues.  As a result, the Sturgis Pretzel Factory has the distinction of being the oldest continuously operating pretzel factory in the United States. 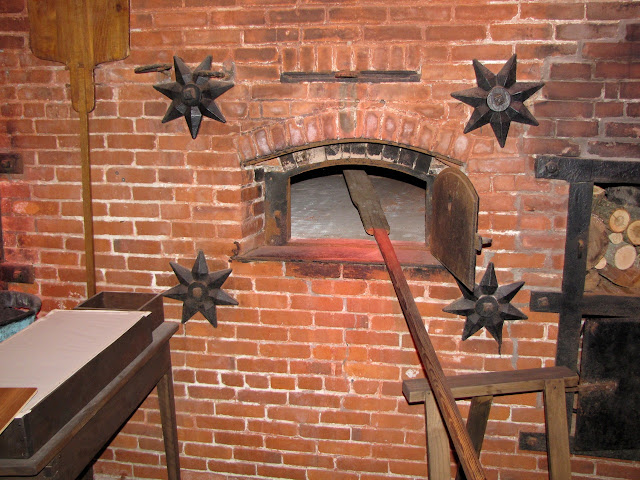 Wood Fired Bakery Oven
-------------------------------------
The average American consumes just under two pounds of pretzels per year but the average resident in the Philadelphia area eats over 20 pounds of pretzels a year, twelve times the national average!  Wow, that's a lot of carbs!  Philly is best known for their famous soft pretzels that are baked daily and sold throughout the city at street corners to customers in cars waiting at traffic lights.  A friend of mine from Philadelphia says the perfect Philly pretzel is a bunch of several cold pretzels stuck together, purchased from a guy selling them from a stolen grocery store shopping cart, who hasn't bathed in several days.  Sadly, this seems to be the norm around the sports complex in South Philly, where these guys are on every street corner within a two mile radius of Citizen's Bank Park!  I will admit, I purchase them every chance I get and they are delicious!  Something to gnaw on for the drive home! 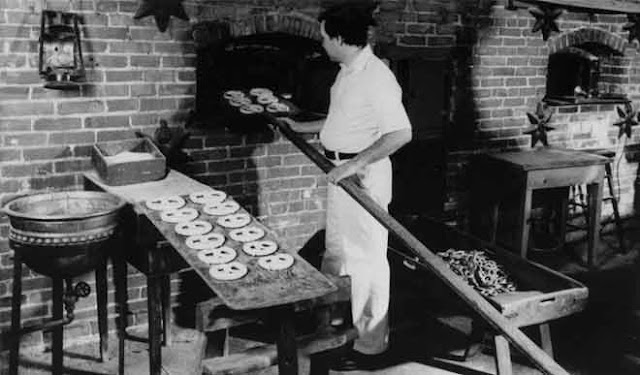 Pretzel Factory in Action
(Image Credit / Pennsylvania State Archives)
---------------------------------------------------------------
Soft pretzels are still my favorite pretzel.  I can remember my parents buying them at the small stand outside the entrance door of Kmart in Lancaster on the Fruitville Pike.  They sell the Super Pretzel brand everywhere now and you can even buy them frozen at the grocery store and make them at home in the oven but... it just doesn't cut it.  Auntie Anne brought the soft pretzel into the mainstream with huge success by creating a version that in dipped in butter oil to give it flavor.  This is an old Amish recipe that I had tried over the years at various farmers markets throughout Pennsylvania before Auntie Anne went big time.  In my opinion, this just isn't a true soft pretzel with all the various flavors and dipping sauces.  It can cost you about seven bucks to get two pretzels and a dipping sauce that could run upwards of 1000 calories.  It seems more like a dessert pastry than a snack!  A Cinnamon Sugar soft pretzel... Really? 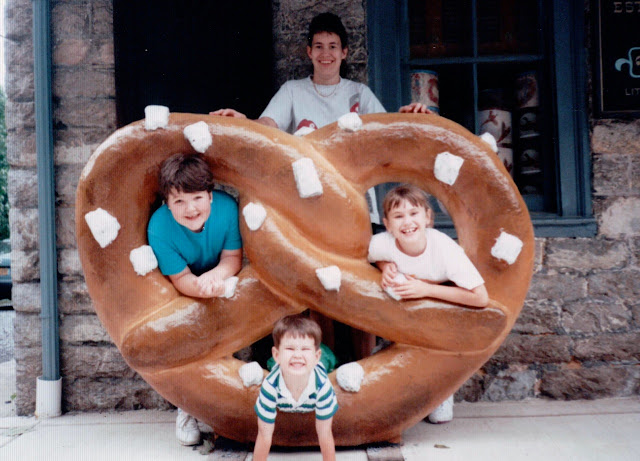 The Famous Lititz Pretzel Sign
----------------------------------------------------
Don't get me wrong, I don't claim to be an pretzel expert but I think I have eaten more than my fair share of the national average of annual pretzel consumption.  In fact, I am probably approaching Philadelphia regional levels so I think I am more than qualified to give you my honest opinion.  I am so impressed by the new kid on the block in the commercial soft pretzel franchise war... the Philly Pretzel Factory brand.  These pretzels are true Philly style soft pretzels.  You can buy them stuck together just like in the city but they are still warm from the oven and the sales person's personal hygiene is almost sure to pass health inspection!  What more could you ask for... the best of both worlds!  Ok, so maybe they are still 300 calories each, but they have zero grams of fat and you can get three for about a buck and a half!   How can you pass up a deal this good?  Hey kids... Do you recognize one of your teachers from Warwick Middle School in the photo above?  Answer revealed at the end of the blog! 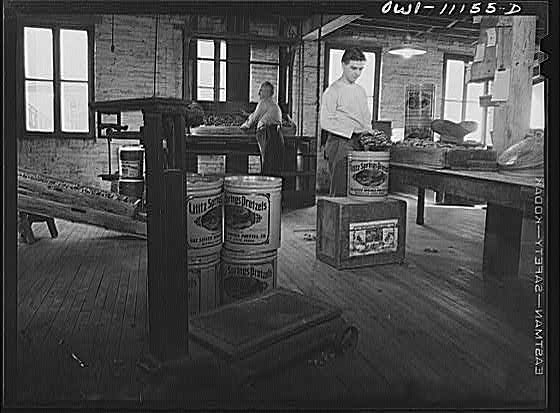 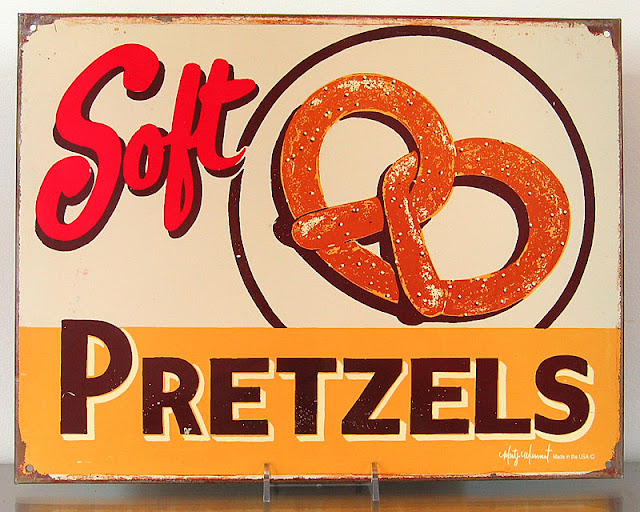 Old Soft Pretzel Advertisement Sign
--------------------------------------------------
The tour was well done, fun and informative.   Each person on the tour received a piece of dough and was taught the proper Julius Sturgis method of twisting the perfect pretzel.  It took a couple tries but we eventually got it.  We were told that the best hand twister of all time could roll and twist over 40 perfect pretzels a minute.  Show off!  The wood fired ovens are still functional and the bakery really hasn't changed since the start of operation.  The tour lasts about a half hour and keeps your attention the whole time.  There is a small gift shop where you can purchase... pretzels!  Most of the renovations have been in this area, restrooms, etc.  Despite Katelyn's pretend lack of enthusiasm, I thought the tour was a great way to spend a half hour for three bucks.  Unless of course you wanted to buy a string of a half dozen Philly Pretzel Factory soft pretzels fresh out of the oven! 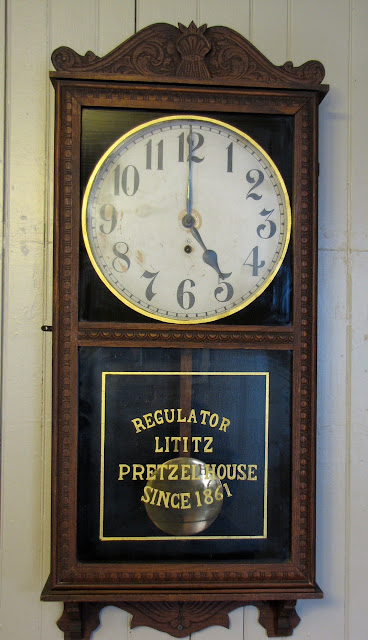 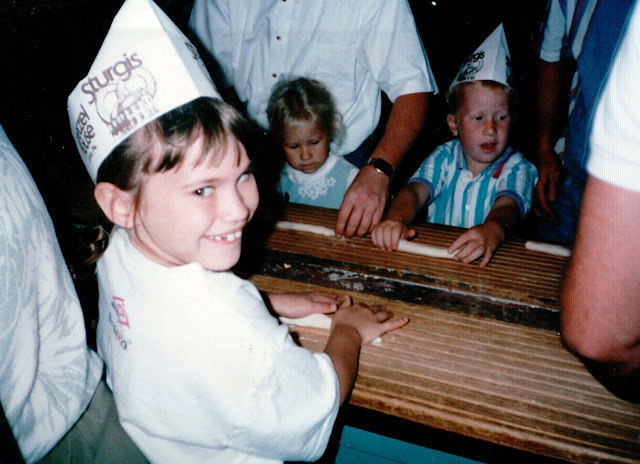