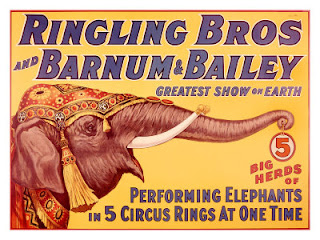 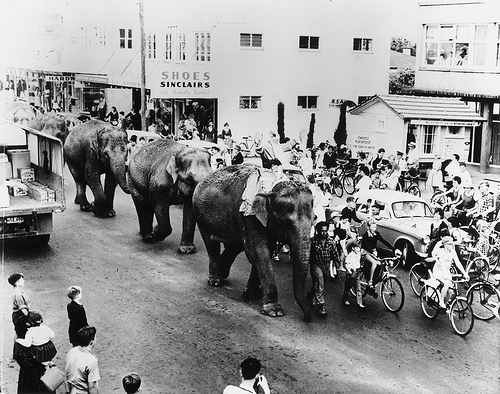 Circus Comes to Town in Papatoetoe, CA
(Photo Credit / Manukau Library / 1962)
---------------------------------------------------------
Nothing is more exciting than the circus coming to town!  My father recently recounted one of his most exciting memories from his childhood.  He was about eight years old and had gone with his mother into Lancaster city to visit his grandmother on Queen Street.  He was out on the sidewalk playing and watching the busy city world around him that was so unlike his rural home on the family farm located on a dirt road in Warwick Township.  He was riding his bike up and down the street when he heard a loud sound coming from down the street to the north.  In the distance was an enormous elephant marching down the street right toward him.  People came out onto front porches and stoops to see the spectacle of exotic animals and wagons make their way down Queen Street toward the fair grounds. 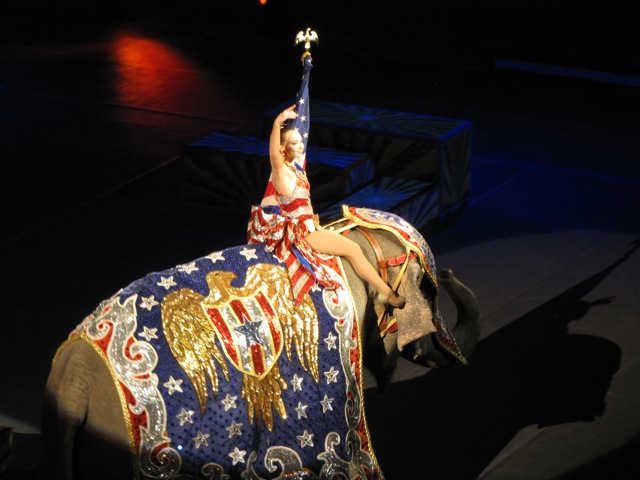 Star Spangled Elephant
-----------------------------------
What a great way to advertise your arrival!  It was a spontaneous parade right in the middle of the day and the calliope played the festive music to compliment the scene.  My father later attended the circus accompanied by his older sister Lois, who bought him a chameleon to take home as an exotic souvenir to remember the event.  How cool is that?  I didn't ask him how long it lived... It probably didn't live a full twenty-four hours so I didn't ask!  Childhood pet memories can be painful.  I still remember the crayfish I caught in a stream when I was a kid.  I found it upside down and dead in my fish bowl the next morning.  At first I thought he was sleeping and, well, you can guess the rest.  It still hurts!  Anyway... On with the show! 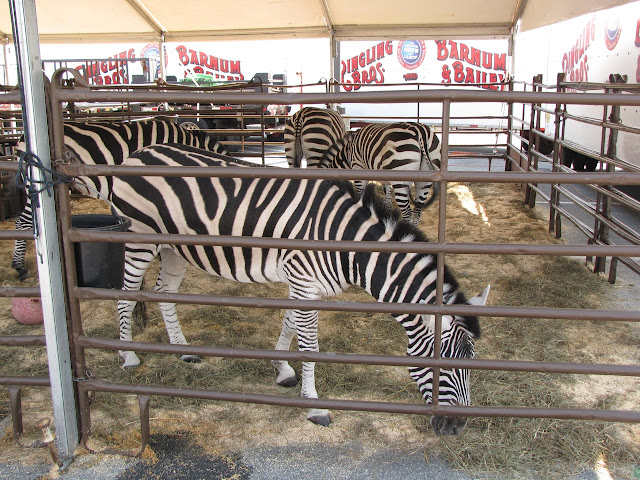 Zebra Paddock Area
-----------------------------------
I vaguely remember my father taking me to a small traveling circus in nearby Manheim, Pennsylvania.  Like my father, I specifically remember the elephants and being afraid of the massive animals as we visited them in the elephant's tent before the show.  They were chained to the ground with a thick metal cuff around their foot.  Anything that was this big and needed to be chained down, couldn't be safe to be around.  They were massive, especially when you are standing right next to them and even more so, when you are only eight years old!  I had always wanted to take my daughter Katelyn to the circus and I recently had an opportunity as the Ringling Brother and Barnum Bailey Circus was in Hershey, PA for a few weeks to present their famous performances, touted as the Greatest Show on Earth! 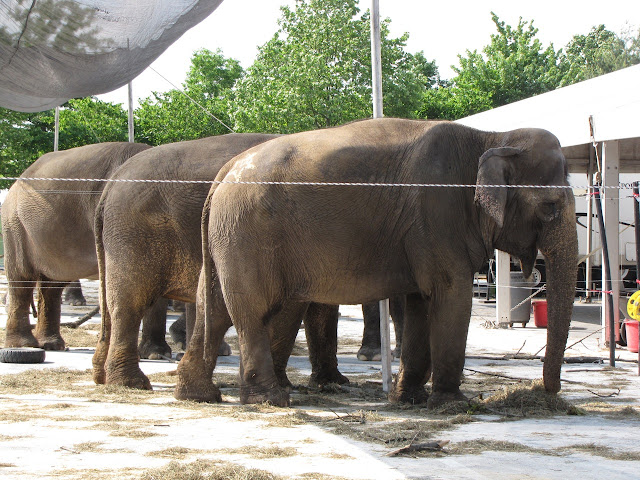 The Famous Elephants at Rest
-----------------------------------------------
I was able to order last minute tickets through Ticketmaster.  They seemed to be half decent seats for only twenty dollars each.  I didn't mind paying the necessary fees for ordering online or the unavoidable mystery taxes that added to the final cost of the tickets.  However, my one knock on Hershey is the fact that in addition to paying for tickets, you also have to pay ten dollars to have your car wait outside in the parking lot.  I equate their pay-to-park policy to paying a fee at the supermarket to park your car in the supermarket lot while you spend money in their store.  My poor car didn't even get to see any elephants!  Anyway... Katelyn and I made our way to the Giant Center, a sturdy concrete and steel substitute for the traditional Big Top tent.  Our first stop was to see the animals who were paddocked outside in the parking lot on the far side of the stadium.  The elephants were once again the main attraction and were shaded from the sun by large festive tents.  You couldn't get nearly as close as I had as a kid, probably due to modern day liability issues. They didn't look so intimidating from a distance but I was glad to see they were no longer contained within leg irons like prisoners. 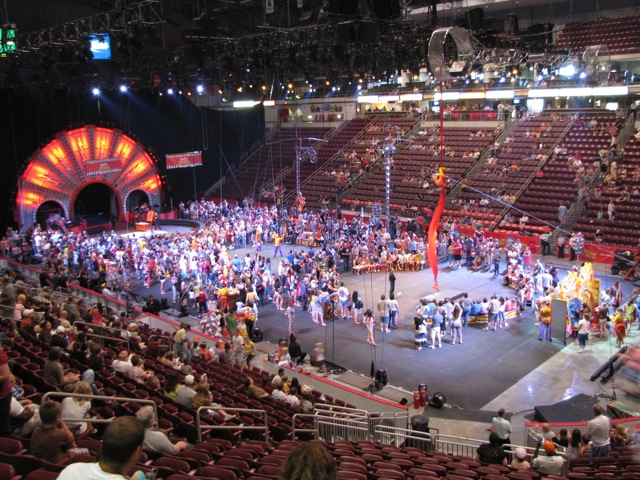 Show Before the Show
--------------------------------------
Once inside, we easily found our seats and then headed back out into the stadium gallery to get some nourishment and maybe a souvenir or two.  It turned out to be the most expensive restaurant in town with maybe the exception of the Hotel Hershey.  A hot dog was $3.50 and the prices went up from there.  For a minute I thought I was at a Phillies game!  Maybe we should have waited for Dollar Dog Night!  We got some forgettable food that equaled the cost of a ticket and headed back to our seats.  We passed by a multitude of stands selling souvenirs adorned with the famous circus logo but decided to focus on the show which was about to begin.  There were various small acts taking place on the arena floor and people from the crowd were able to enter to see the action up close.  We thought about it but the journey was a long way down steep steps and things seemed to be wrapping up for the main event so we stayed put.  Katelyn brought along her binoculars and we checked it out from our perch high above the crowd. 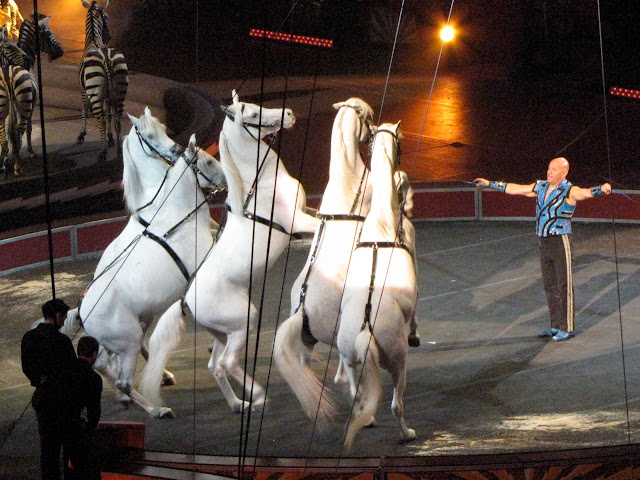 The White Stallions Rise
------------------------------------
Soon the area floor was empty and the lights went dark, followed by an enthusiastic cheer from the sold-out crowd.  An impressive procession of entertainment flowed out of the arena entrance to the thrill of all.  Soon the Star Spangled Banner filled the air led by Lady Liberty aboard a very patriotic elephant decked out in red, white, and blue decorations.  One act followed another including, the trained horses, high wire balancing act, the big cats' tamer, acrobatics, gymnastics, strong men, clowns, clowns, and more clowns!  Oh, and did I mention the elephants?  It was a fabulous show for kids of all ages, including Katelyn and myself!  It was a mix of the traditional circus acts, enhanced with modern technology.  Many of the clown acts rotated to six different stations around the ring so every seat was a good one!  Unless, you have a fear of clowns, of course! 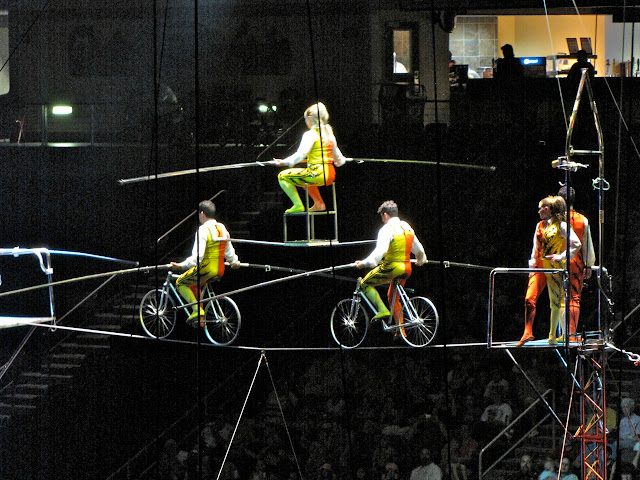 High Wire Balancing Act
-------------------------------------
The show took a break for a short intermission to give the crowd time to visit the gallery, go buy more food, souvenirs, and visit the facilities.  I decided to buy a souvenir cup for soft drinks because it was a "better" value?  However, instead of getting my Diet Coke in a cup adorned with the coveted Ringling Brothers and Barnum Baily Circus logo, the refreshment stand attendant handed me a Hershey Bears cup?  What's up with that?  I've never been to a Hershey Bear's hockey game... I guess that's next on the list?  I already have the cup that designates me as a devoted fan!  Apparently the Hershey stadium concessions were on the inside of the gallery ring and the circus stands were on the outside.  I quickly got in line for a traditional box of circus popcorn.  However, when I got to the front they wouldn't take my debit card for payment... some circus concessions were "cash only" transactions.  Par for the course... live and learn.  Hey, I think the second half of the show is about to begin! 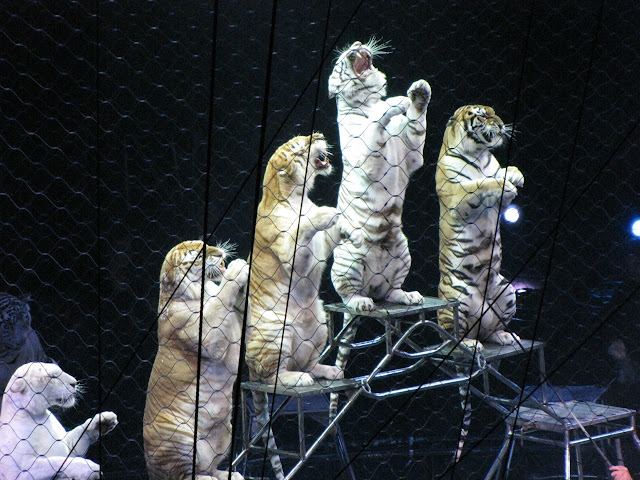 Nice Kitties!
------------------------
The second half of the show started out the with big cats' tamer whose co-workers didn't seem to like him very much.  Maybe it was all part of the act, but the tigers were baring their teeth and swatting their enormous claws at him every chance they got. He had a whip that seemed more for effect than defense or instruction.  They were all well trained but did resist his commands from time to time with life threatening expressions that suggested a violent death for the only food source within the cage.  The lion tamer was outnumbered and easier prey than a wounded newborn wildebeest on the African Savannah but all fell into line eventually with the cheers and applause from the crowd.  Wow, I wonder where that guy's life insurance rates top out?  I guess at the end of the day, if you don't get digested, it's a good day! 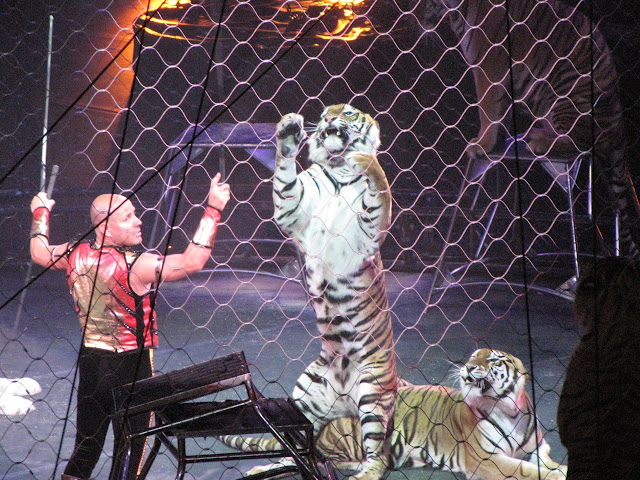 The Lion / Tiger Tamer
----------------------------------
Ok, it's now time for a little history... The Ringling Brothers Circus has been around since 1884 and survived to later team up with P.T. Barnum and Bailey circus in 1907, which they ran as two separate shows until they merged into one big show in 1919.  The purchase of railroad cars in 1889 made the circus much more mobile, where the show could reach a much wider audience.  Unlike many of their competitors, Ringling Brothers and Barnum Baily Circus had a good reputation free from the gambling and shady ticket sales associated with the industry.  The freak shows associated with P.T. Barnum eventually evaporated over time.  Their honest and clean status allowed their company to become well known as a family friendly entertainment venue that endures to the present day.  I looked but couldn't find the bearded lady or a two foot tall man with two heads and a lizard tail... However, if you read those tabloid newspapers at the supermarket checkout... they still exist! 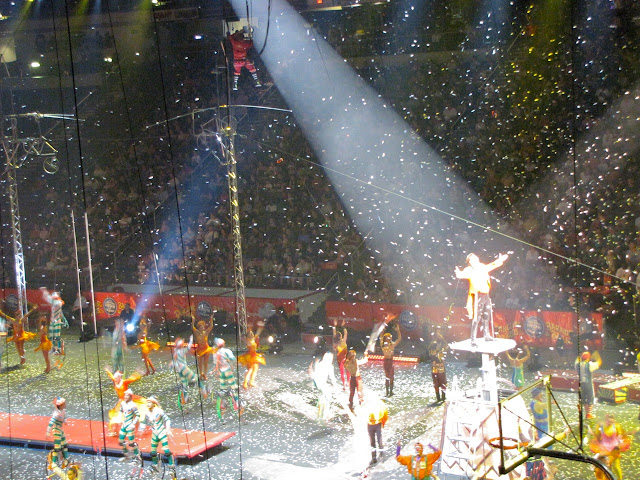 Spectacular Ending Ceremony
----------------------------------------------
One of the highlights of the second half was the iconic man shot across the arena from a cannon but in this case it was a crossbow!  The bow was raised in the air, the daredevil assumed the position, was set on fire, and was shot the length of the stadium floor into an inflated air cushion that exploded as it collapsed under his weight!  Greatest Show on Earth, indeed!  A tumbling gymnastics act that could compete on any Olympic level finished up the three hours of action. Well all good things must come to an end and the grand finale brought out all performers for a well deserved bow that brought waves of rolling applause from the crowd. Katelyn and I really thought the entire show was incredible and an experience we will never forget.  We didn't buy any souvenirs but the best keepsakes are the pictures and memories we captured throughout the experience.  It really was The Greatest Show on Earth! 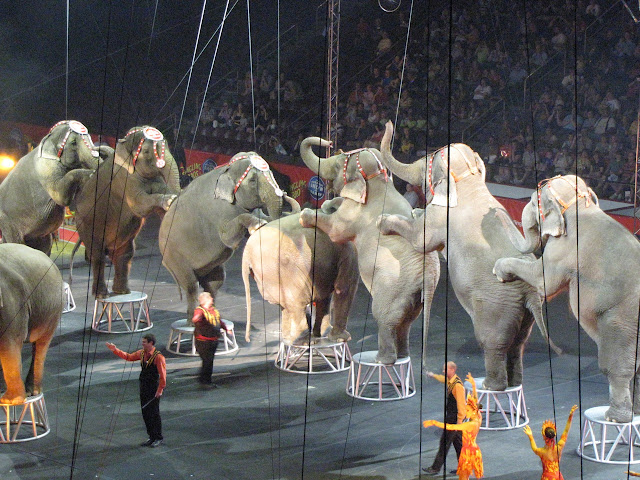 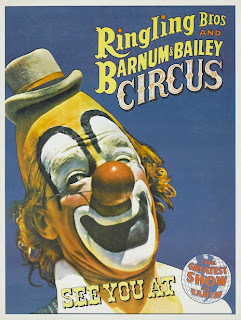 Posted by Camp Martin Travels at 7:10 AM