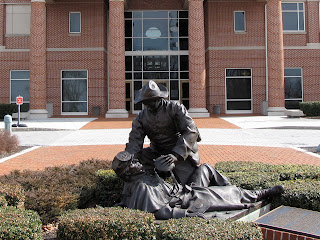 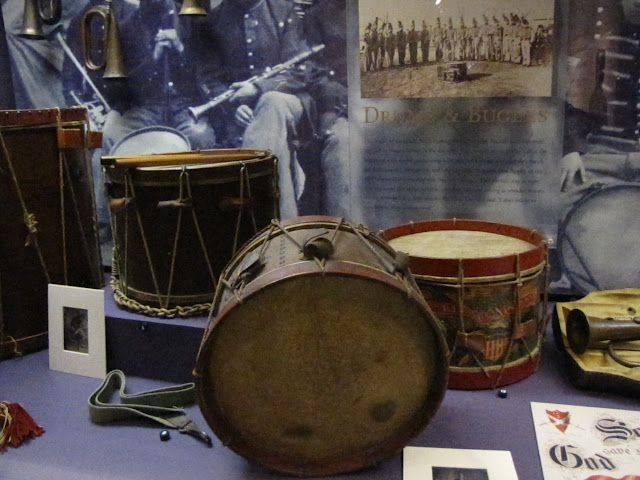 The weekend had finally arrived and it was a sunny Saturday morning.  A perfect opportunity for a couple of social studies teachers to head off for a well deserved day trip of checking out historical artifacts at the National Civil War Museum in Harrisburg, Pennsylvania.   I was joined by two of my social studies colleagues from Warwick Middle School for a fun filled day of browsing man-tiques!  I had visited the museum before for a quick walk-through tour during a graduate class field trip and wanted to explore the impressive museum in more depth.  My two accomplices were Dan Gwinn, a seventh grade World Cultures teacher and his student teacher from Millersville University, Matt Kemble, also known as... The Boy Wonder. 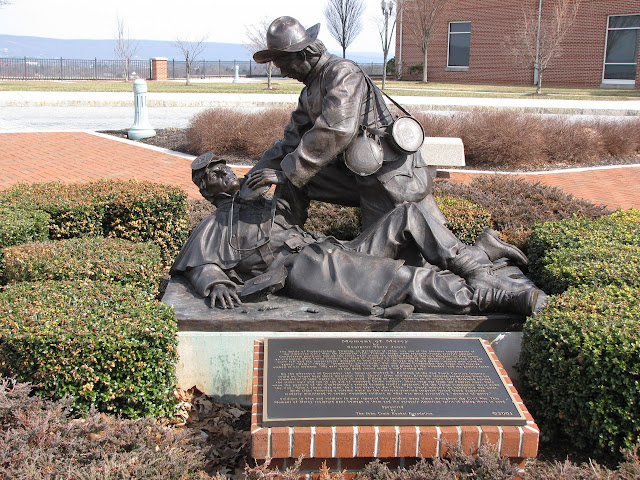 Moment of Mercy
------------------------------------
With our combined advanced geography skills (GPS) we found the museum with relative ease.  The National Civil War Museum is located on top of a steep hill in the middle of Reservoir Park just outside the city of Harrisburg.  The building was beautiful and we were greeting by a sculpture entitled Moment of Mercy, which fully captures the emotional vibe of the Civil War.  The sculpture portrays two soldiers from opposing sides, who come together on the battlefield, which transforms into a moment of compassion despite their differences.  The sculpture depicts a real event in history when Union forces were overwhelmed by Confederate forces outside Fredericksburg in December of 1862.  A young Confederate sergeant named Richard R. Kirkland risked his life by offering water from his canteen to wounded Union soldiers.  The opposing Union soldiers held their fire and respectfully watched the moment of mercy unfold before them. 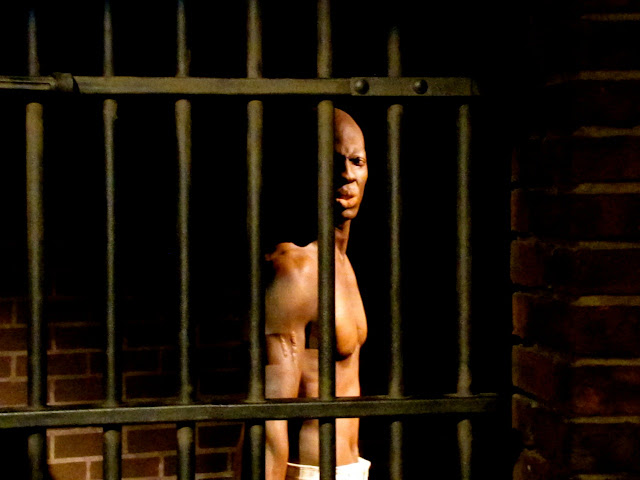 The Scorn of Injustice
------------------------------------
After entering through the front door into the impressive foyer, we began our tour on the second floor where the museum's story of the Civil War begins.  Instantly you are confronted with the ugly truth of the roots of the conflict... A slave auction brought to life within a life size diorama.  The reality of slavery is the one topic that is often missing from the story of the Civil War.  A recent issue of Time magazine confronted America's problem with denial concerning slavery and the Civil War in an article entitled, Why We're Still Fighting the Civil War.  The article states that one of the last politicians to openly admit that slavery was the one true simplistic cause of the Civil War was none other than Abraham Lincoln, who appears on the cover shedding a single tear.  You can argue that the war was caused by differences in climate, geology, states rights, economics, etc.  However, if you take an additional step from any of the suggested complex causes in any direction, slavery is always present and the true single cause of the war. 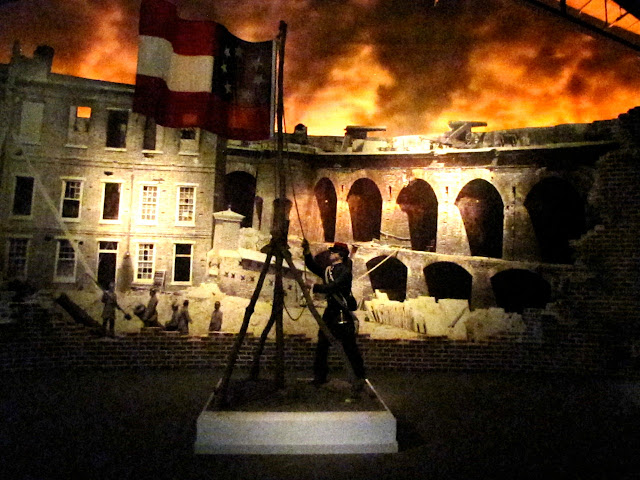 You step into the auction scene and can't help but feel instantly uncomfortable.  Voices echo through the space with the disturbing dialogue that sold human souls like livestock.  A newly arrived slave from Africa is contained within a prison cell after surviving the Middle Passage across the tropical Atlantic.  His expression and direct gaze through the bars stare right through you.  The setting is accented with a single bale of ginned cotton, symbolizing the acquired wealth through corporate farming harvested on the backs of the enslaved.   It is the only museum that I have visited so far that hits you right between the eyes with the ugliness of slavery as soon as you walk through the door.  It sets the tone for your entire visit and exposes the true cause of the war for all to see.  Slavery is often called the Peculiar Institution because even though the injustice of the practice was obvious, people enforced it anyway. 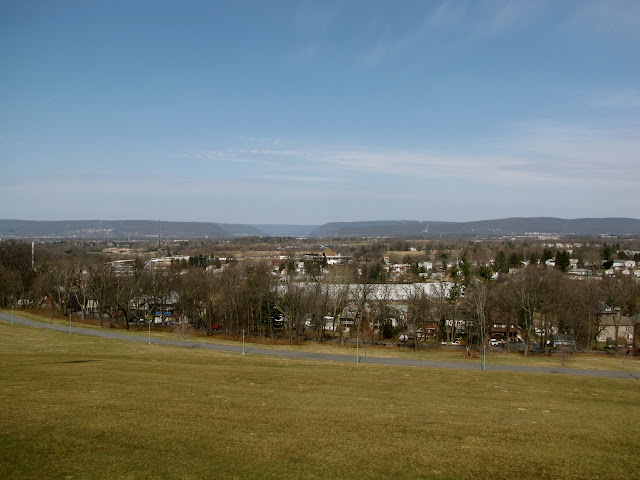 Next, you step into the section of the museum that recreates the attack on Fort Sumter; the action that officially started the Civil War.  The scene puts you within the fort as Confederate forces shell the outer walls from shore artillery batteries.  The flashes of bright light, cannon sounds, and vibrations create an impressive fabrication of the famous event.  The museum consists of a series of rooms that allow you to visit topics of the war individually and semi-privately.  The museum touts itself as the only museum in the country that tells the story of the Civil War without bias toward either side.  We all agreed that it was well designed and seemed to give equal representation of the two armies and their accompanying stories.  One of the highlights was the Observation Deck, which gave us an amazing view of the distant Susquehanna River, where Camp Curtain once received fresh recruits from the four corners of Pennsylvania for the Union Army. 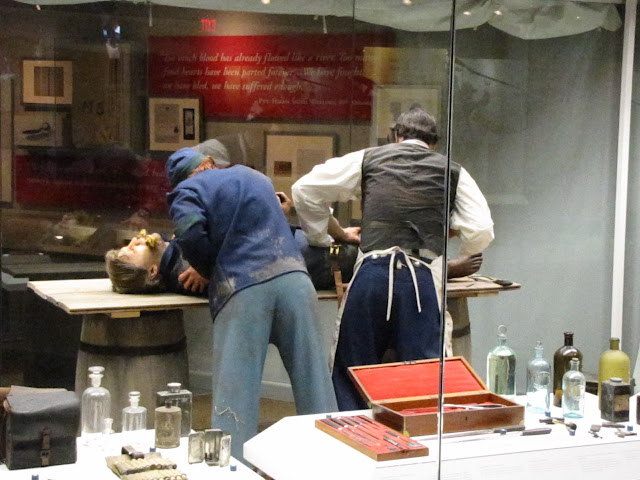 Union Field Surgeon at Work
----------------------------------------------
The National Civil War Museum collection exceeds more than 24,000 total items, which were purchased and donated since the museum was conceived in 1994.  Most of the items in the vast collection are document artifacts but the star of the show for the general public are the 850 three dimensional artifacts on permanent display.  The remaining items are archived for historical research and are only accessible to members of the museum who are granted special access by appointment with the Library and Archives Collection Curator.  We were all impressed by the quality of the items on display including weapons, maps, models, life size dioramas, and even a rare hospital ambulance wagon.  The most obscure item was a lock of hair that was sent by Confederate General George E. Picket to his beloved wife Sallie in a letter home.  For some reason, I don't think my wife would appreciate receiving such an item from me in the mail.  Maybe next time when I trim my beard... 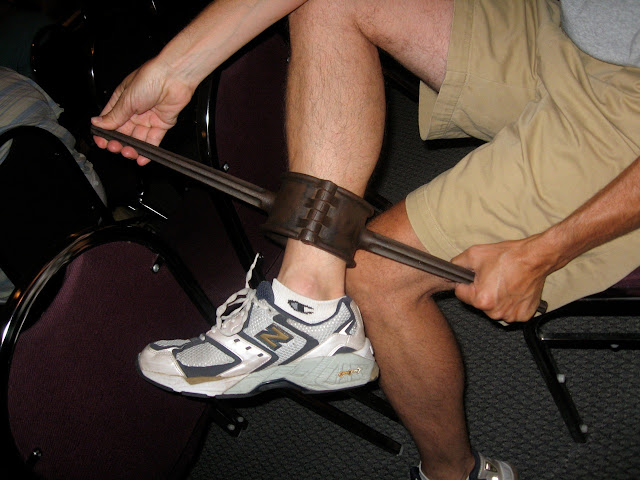 Slave Ankle Collar Artifact
-------------------------------------------
On my previous trip to the museum as a graduate student, our group was given rock-star access to some of the items reserved for scholarly research.  Brett Kelley, who was the Curator of Collections for the museum, gave us a presentation and allowed us to handle some rare artifacts in the private collection.  The most memorable was an ankle collar designed for a slave who was at risk for becoming a runaway.  We were allowed to try it on and attempt to walk across the room.  The weight and extended bars in both directions made movement almost impossible.  It was more than eerie to think this once had been used on fugitive slaves who might have been caught after an escape attempt by way of the Underground Railroad.  It was more than inhumane in design and elicited emotions of helplessness, sorrow, and despair.  It was one of the most powerful artifacts I have ever seen or had the privilege to actually handle.  The power of touch... 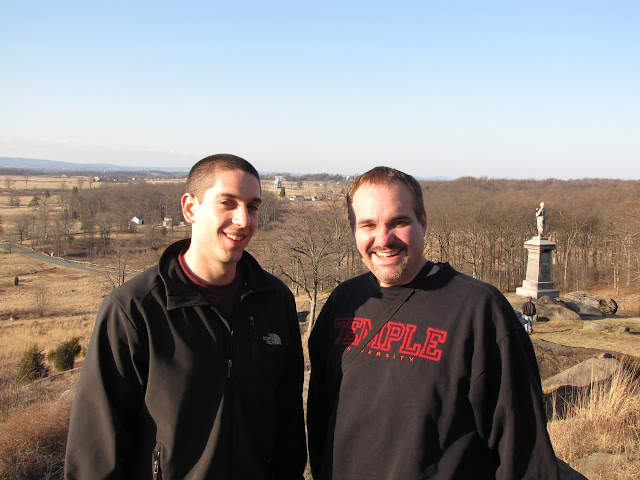 Well, we completed our tour and headed off to the gift shop which had a lot of high quality historical souvenirs if you had disposable income to spare.  Not today... Ironically it was Abraham Lincoln's birthday and we couldn't help but try on the iconic stovepipe hat and fake beard to celebrate the occasion.   Several pictures were taken but have since been permanently destroyed to prevent the images from falling into the wrong hands and winding up on someone's wall on Facebook!  Who's hungry?  It's time for lunch.  We decided to hit a place less than a mile away that I discovered on my previous stay in Pennsylvania's capital.  The Appalachian Brewing Company was in a reclaimed warehouse in the old industrial area of the city.  We each had a delicious sandwich and ordered a "root beer" to wash it down... Just Say No Kids!  Sometimes it's hard being a role model! 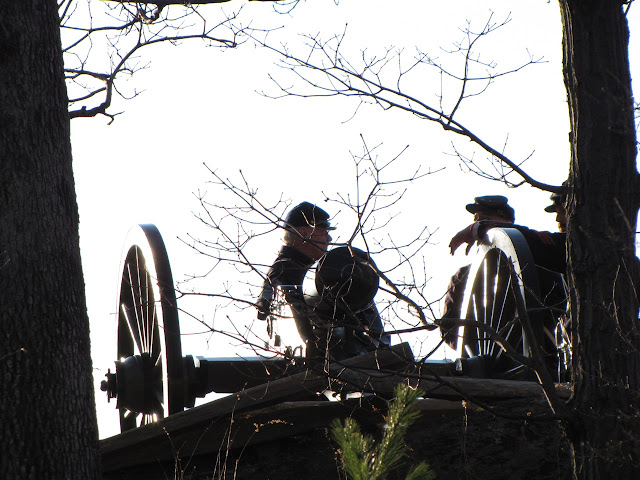 The original plan was to head for home after lunch but how far away was Gettysburg?  It was Lincoln's birthday after all!  Calibrate the GPS and we're off!   About an hour later we were driving up the main drag on Steinwehr Avenue counting the number of businesses offering ghost tours to tourists.  We lost count after about a dozen and soon pulled into a parking spot to explore on foot.  Mixed in with the run of the mill tourist shops selling the quintessential low grade souvenir crap are some high quality shops.  A General Robert E. Lee snow globe... Really?   I navigated us through the labyrinth of cheesy tourist traps to one of my favorite stores, frequented by Civil War reenactors like myself.  The Quarter Master General sells high quality reproductions and authentic artifacts.  It's kind of like shopping at a museum where everything is for sale.  If we had more time, The Drummer Boy and Dirty Billy's Hats are also worth a visit, just to name a few. 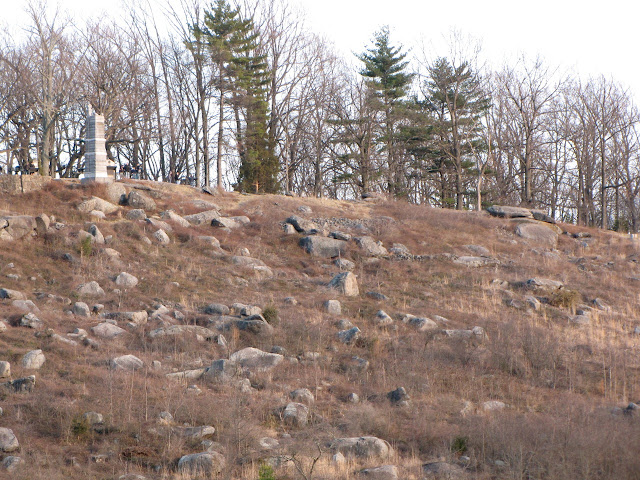 After a quick walk through the new visitor's center and the expansive gift shop, we headed out to the battlefield as the sun began its slow decent toward the horizon.  We examined the monuments along the rolling avenues through quiet fields and dormant woods of hallowed ground.  We stopped at a few locations including the 30th PA Monument, Little Round Top, and Devil's Den.  It was interesting to see Devil's Den from the heights of Little Round Top where the Union dug in to hold the high ground from the persistent Confederate charges launched during the second day of fighting.  Union General Joshua Chamberlain famously led a bayonet charge down the hill when his troops ran low on ammunition.  The Swinging Gate strategy took the Confederate troops by surprise and were quickly overwhelmed, captured, or retreated.  It was one of the few bayonet charges in the war. 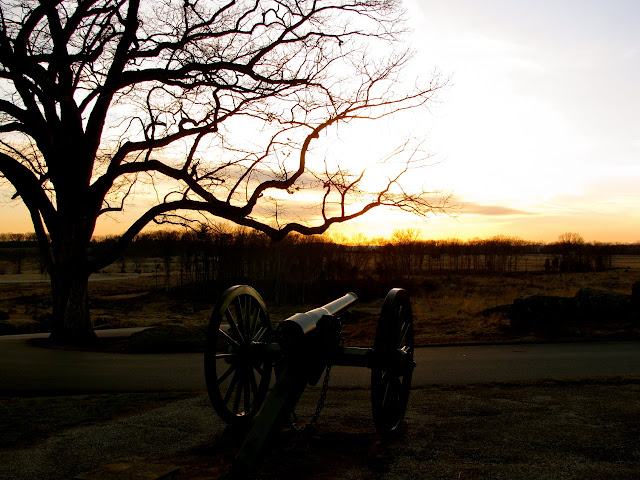 Devil's Den is an outcropping of large rocks a short distance from the base of Little Round Top that was occupied by both sides during the three day conflict.  The sun began to set and filled the space with the yellow and orange hues of dusk.  We all explored the cracks and crevices of the unique rock formation and couldn't help but look for a hiding spot that would have protected you from Union rifles.  Desperately thirsty men may have braved enemy fire periodically for a quick sprint to nearby Plum Run for a drink.  The small creek acquired a second name in the wake of the fighting when it ran blood red after overflowing during heavy rains on July 4, 1863 when the water came in contact with Confederate dead that had yet to be collected for burial.  Bloody Run, was the creek's new name and it ran through what would be described as the Valley of Death where thousands of brave men lost their lives in the gap between Little Round Top and Devil's Den. 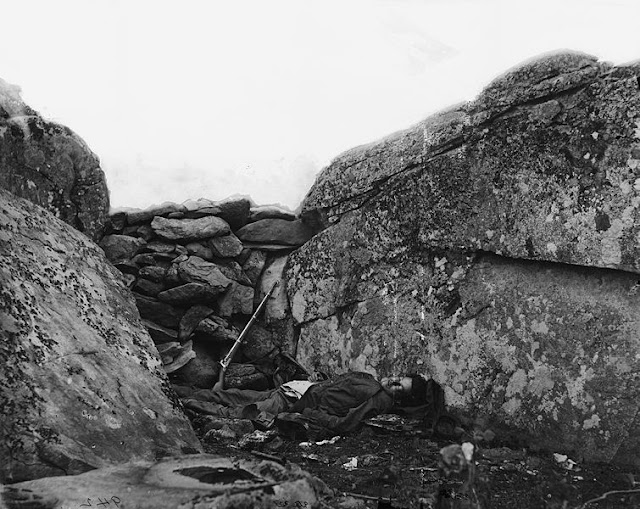 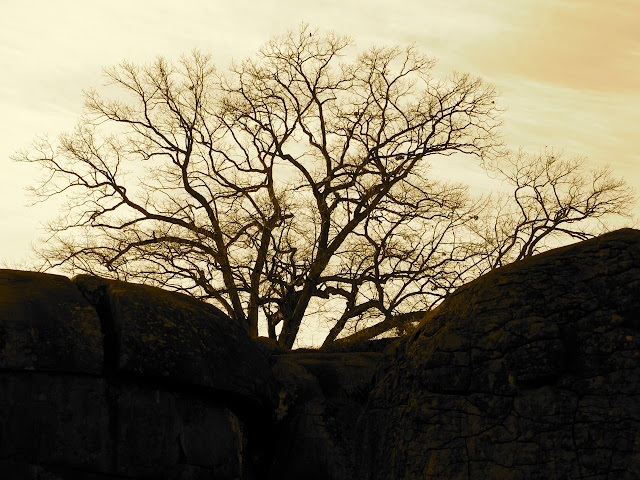 Well, the sun was about to disappear from the sky and the ghost tour circuit was about to engulf the streets of downtown Gettysburg so we decided to skedaddle!  It was a really a fun day of Civil War themed travel with two good friends who share an interest in history to match my own.  Thanks to Dan and Matt (Boy Wonder) who were my copilots on this adventure and my final episode of Camp Martin Travels for the 2010-2011 season.  It is time to take a summer break from posting and do some more traveling and taking photographs to be ready for next year.   Thanks to everyone who follows and reads my blog.  I really appreciate your support and encouragement.  See you in September! 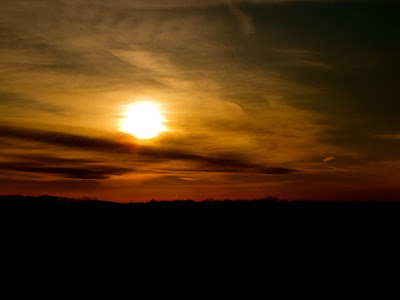