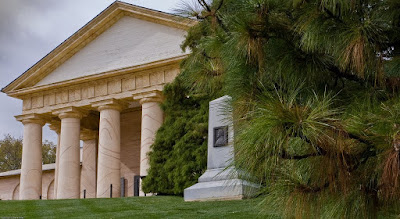 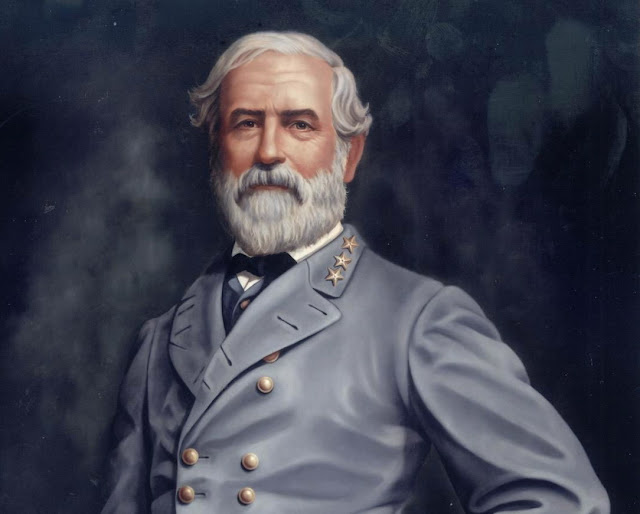 General Robert E. Lee
(Painting Credit / Rick Timmons)
--------------------------------------------------
On the evening of April 19, 1861, Robert E. Lee faced a difficult decision.  Tensions between northern free states and southern slave states had erupted into secession and war between the two regions was imminent.  Virginia was about to follow in the footsteps of South Carolina and secede from the United States of America.  The previous day, the new President of the Confederate States of America, Jefferson Davis, asked the highly acclaimed general to side with his home state and lead the military of the CSA.  Earlier, President Abraham Lincoln had asked that Lee continue his career serving the United States Army as he had faithfully for the previous thirty-two years.  Lee wrestled with the decision privately in the upstairs bed chamber of his home known as Arlington House.  Around midnight, he emerged from his private council to announce to his family that he made his decision and would support his home state of Virginia.  In his hand he held his letter of resignation that would be sent to President Abraham Lincoln.  Several days later, Lee left Arlington House and traveled to Richmond, Virginia, the capital of the Confederacy.  He would never see his home again. 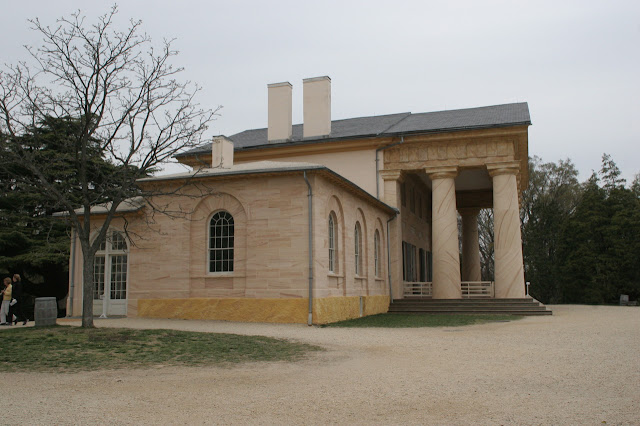 Arlington House Mansion
---------------------------------------------
Robert E. Lee did not believe in the institution of slavery and did not own any slaves.  The slaves his wife inherited along with Arlington House, following the death of her father, were freed.  Lee believed the institution was inhumane and evil.   He looked to the future with the dawning of new technology, such as the mechanical reaper invented by Cyrus McCormick, to ease the need for manpower in agriculture.  In his opinion, the institution of slavery was now unnecessary.  Despite this attitude toward the slavery issue, Lee could not take up arms against his beloved home state and thus had no choice but to lead the Army of Northern Virginia for the Confederacy.  Lee's conflict with Lincoln was in the president's unwillingness to accept some form of compromise to avoid violence but there was no bend in Lincoln's attitude concerning the subject.  Diplomacy had failed time and again to find a solution and now war would ultimately determine the outcome. 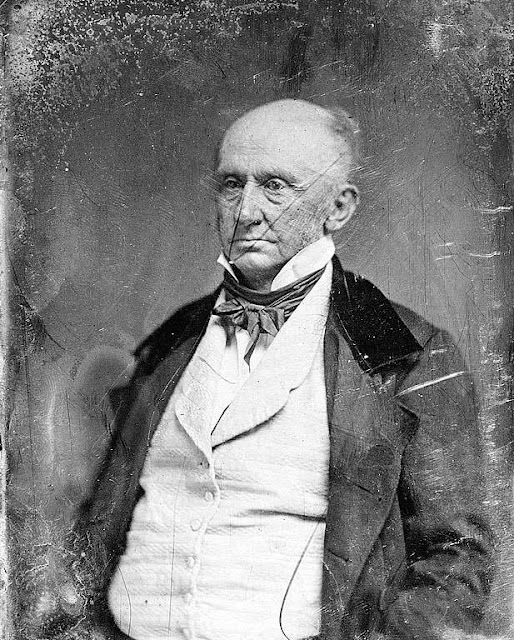 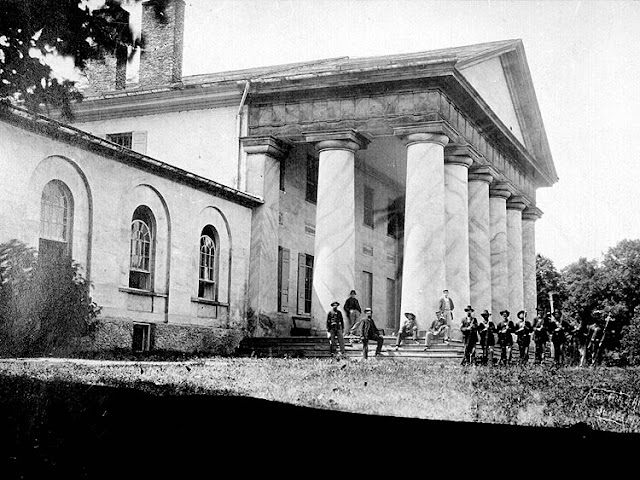 Union Troops Occupy Arlington Heights
(Photo Credit / National Archives)
------------------------------------------------------------
Robert E. Lee left his home to join the cause of the Confederacy and his family soon followed, vacating Arlington House within a month's time.  His wife Mary and their daughters also disagreed with the institution of slavery and were active in abolitionist-like causes.  They sponsored an illegal school, teaching slave children how to read and write on the Arlington Plantation.  They also raised funds for the American Colonization Society, an organization that purchased land in northern Africa to create a homeland for emancipated slaves, which later became the nation of Liberia.  Lee was supportive of his wife's work which included the freeing of the Custis family slaves in 1862.  Later in the war, Lee even pushed the idea of enlisting slave soldiers into the Confederate Army in exchange for their freedom at the end of the war.  Lee was full of internal conflicts concerning the true purpose of the war throughout the four year conflict.  However, his steadfast allegiance to the State of Virgina never wavered. 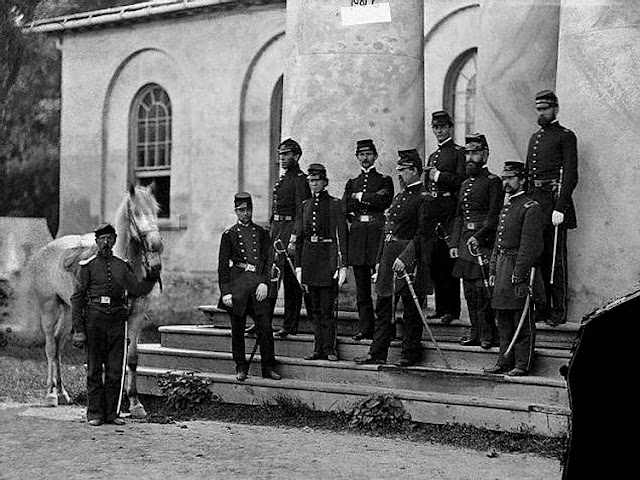 General McDowell and Staff at Arlington
(Photo Credit / National Archives)
------------------------------------------------
The Army of the Potomac immediately occupied the Arlington property and stationed guns on the heights by the mansion overlooking the city to prevent the Confederacy from using the high ground to launch an assault against Washington.  Trees were cut down to make room for batteries of cannon, creating an unobstructed line of fire against a potential enemy invasion from the south.  Over time, a total of five forts were built on the large property along with newly constructed roads to deliver supplies.  Mrs. Lee, now safe in Richmond, was worried about her family's ancestral home and actually wrote a letter to Union General Irvin McDowell.  She respectfully asked General McDowell, who led the First Corps of 40,000 troops assigned the task of defending Washington, if he could spare Arlington House and not to disturb their private residence.  He responded promising to do what he could to protect the house.  However, with the necessities of war, the house was later opened up as a military headquarters.  The interior space of the house was now violated by the Union. 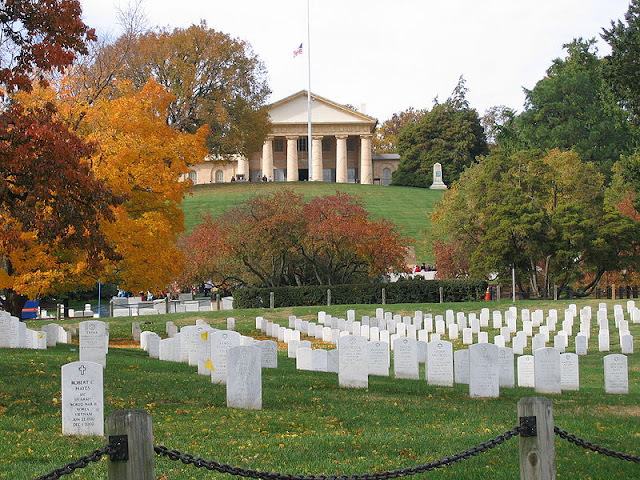 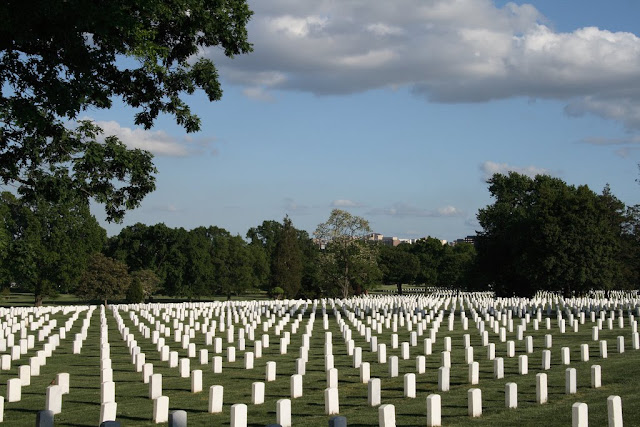 Endless Gardens of Stone
---------------------------------------
Since its inception, the military cemetery has grown to encompass 624 acres and remains an active cemetery to the present day.   After 1900, veterans from previous wars were recovered for reinturment within the sacred space so Arlington National Cemetery now contains the remains of veterans from all of America's wars, including Iraq and Afghanistan.  More than 300,000 veterans have been laid to rest at Arlington with an average of 28 funerals taking place every weekday, equating to almost 7,000 per year. The most well known grave at Arlington is that of President John F. Kennedy, along with his wife Jacqueline Kennedy Onassis, and their infant son, Patrick Bouvier Kennedy.  The grave site is located at the base of Arlington House and is marked by an eternal flame.  The slain president's brothers Robert F. Kennedy and Ted Kennedy were laid to rest nearby. 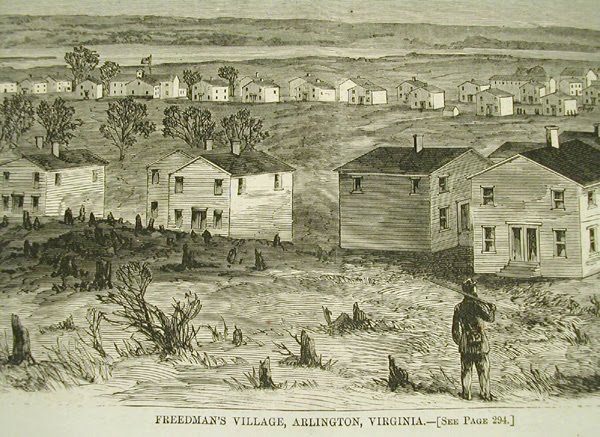 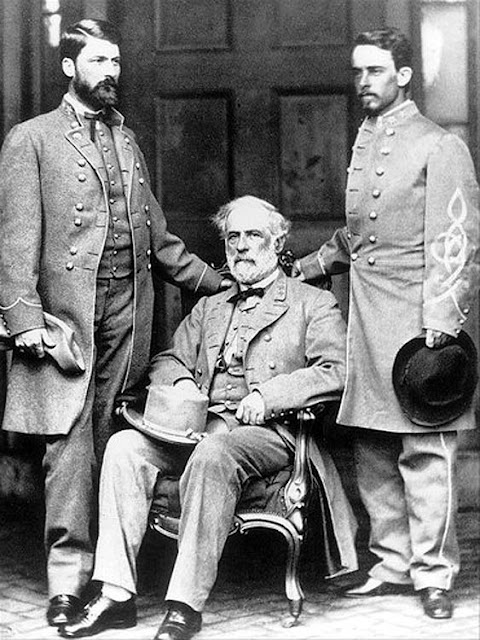 The Eternal Flame
(Photo Credit / Sharpresolution, LLC)
----------------------------------------------------
I have visited Arlington National Cemetery several times and each visit brings out the real emotional cost of war.  It is a humbling reminder of how hollow statistics found in books can have true measure with the visual representation of endless fields of neatly spaced stone markers.  It is a quiet place, one of reflection, and private personal thoughts.  I vividly remember my first visit to the site when my mother and I traveled to the nation's capital.  It was a gloomy day in May with a cold steady rain, which added to the sad atmosphere of the cemetery.  As we stood in front of the eternal flame, my mother recounted the emotional story of the events, as they unfolded in late November of 1963.  Her tears were a testimony to the weight of grief, burdened by a nation in mourning.   It is impossible to describe the impact of Arlington with words.  It is something everyone should take the time to experience, as a tribute to all who rest here within hallowed ground. 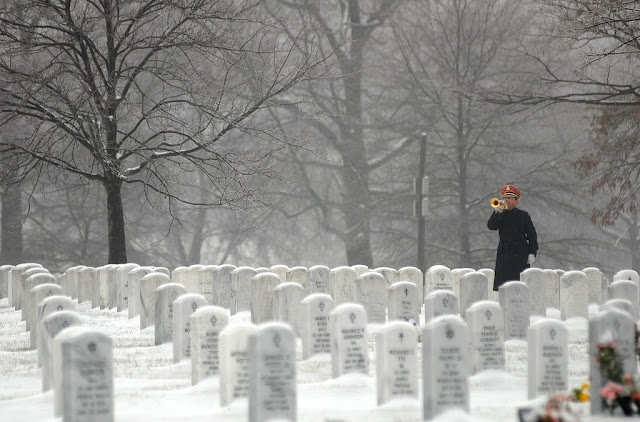 
"Get correct views of life, and learn to see the world in its true light.  It will enable you to live pleasantly, to do good, and, when summoned away, to leave without regret."

"In this sad world of ours, sorrow comes to all; and, to the young, it comes with bittersweet agony, because it takes them unawares." 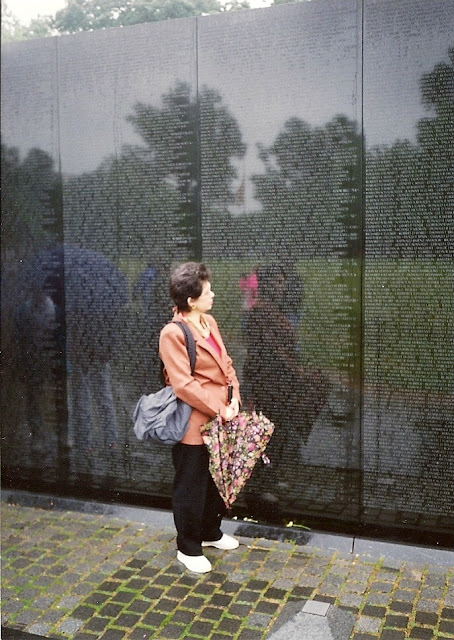 Posted by Camp Martin Travels at 10:08 AM