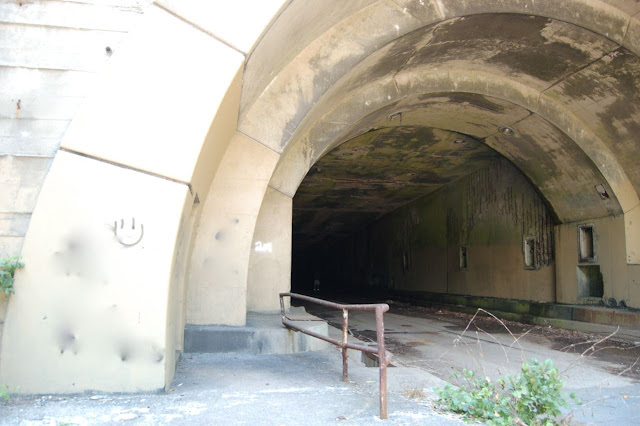 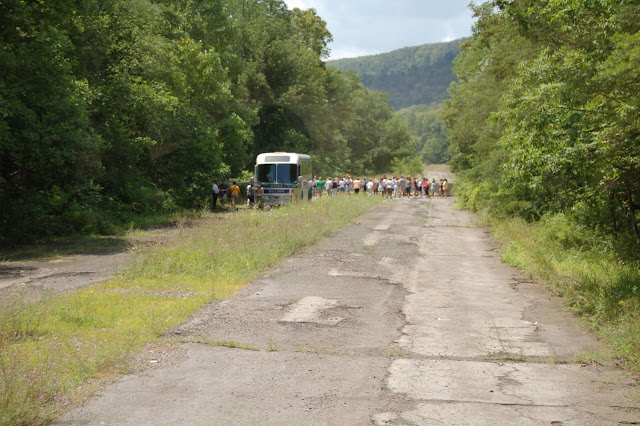 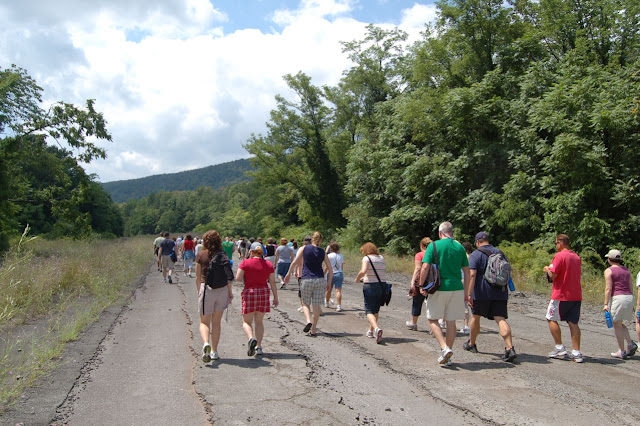 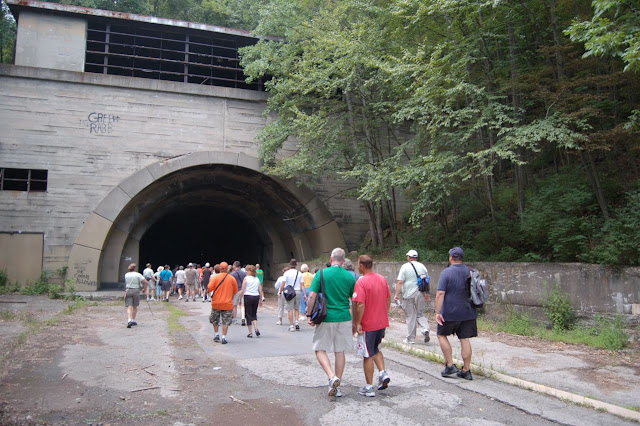 Entering the Tunnel
------------------------------------
Over time, nature began to reclaim the abandoned roadway and the tunnels fell into disrepair and were forgotten.  In 2001, the Turnpike Commission granted the fourteen mile section of the abandoned stretch of the turnpike and accompanying tunnels to the Southern Alleghenies Conservancy who made plans to turn the expanse into a bike and hiking trail.  The project has become known as the Pike2Bike Trail and will encompass an eighteen mile pathway for recreational use when totally completed. The conservancy, known as SAC, is a nonprofit corporation serving six counties in south central Pennsylvania. 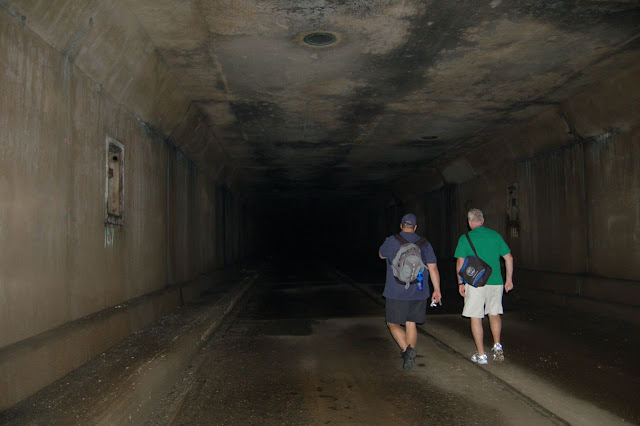 Mike and I Explore the Interior
--------------------------------------------------
Our bus found an entrance point that allowed access to park on the original highway but was blocked off in both directions by concrete barriers to prevent any automotive traffic on the trail.  Immediately you took notice to the decay of the former smooth ribbons of concrete.  It was like you were in the middle of the show Life After People that airs on the Discovery Channel, which shows how plant life will quickly reclaim what once belonged to Mother Nature when people have punched out!  We had to walk quite a distance to the tunnel entrance which was out of view.  It was a hot July day and we baked, walking on the roadway that slowly curved to the right.  We passed by a wide open macadam space that once was the home of the Cove Valley Travel Plaza, which was razed when the tunnel closed.  Too bad, I would have liked to stop in for a ice-cold Diet Coke! 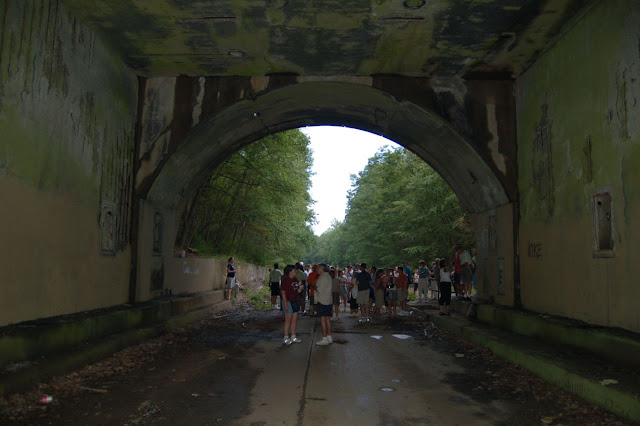 Time to Head Back
-------------------------------------
Eventually the tunnel entrance came into view and light was not visible from within.  As we got close to the opening, a chilly air was coming from the tunnel, which was a welcome treat in the heat.  We ventured inside and peered ahead into the pitch blackness.  The 6,782 foot long tunnel has a slight sloping crest to allow moisture to drain out the ends.  As a result, you have to walk in more than a third of the way before you can see the first hints of light from the other side, reflecting from the tunnel's ceiling.  The chill and dampness of the tunnel resembled that of a cave. The temperature inside remains constant year round and is less than sixty degrees.  The contrast of the warmer temperature outside causes the air to move and can cause a ghostly fog to appear at times near the tunnel openings.  It was really creepy!  We had a schedule to keep and were called back to the opening.  I hope to return someday to travel all the way through to the other side but not by myself.  Like I said, it was more than a little creepy! 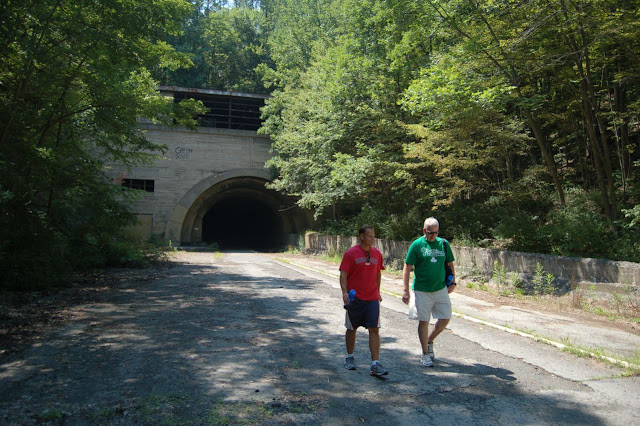 The Return Walk Back
-------------------------------------
On the way back, we passed by a small film crew who were making a low budget movie about the end of the world.  The story line centered around a few survivors who were trying to make it in the post apocalyptic world.  This setting was perfect, the roadway was being slowly devoured by plant life that was forcing its way through every available crack in the road's surface. The trees were mounting an invasion from each side making slow but steady progress.  I wondered how the SAC would maintain the right of way when the Pike2Bike Trail project was completed and running at full speed.  The site was unique and fun to explore. So, if you ever get tired of the Sideling Bypass in the clouds, take a detour and explore the old school way down under! 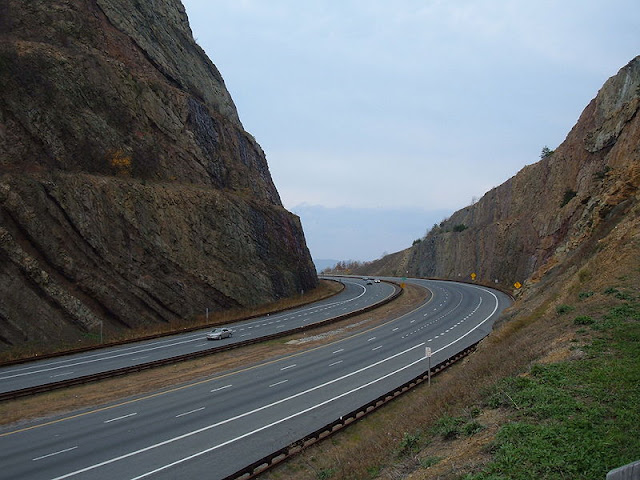 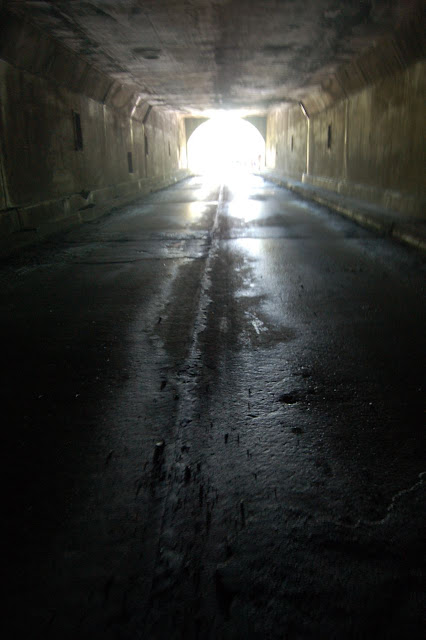