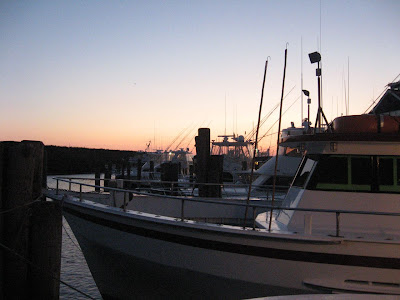 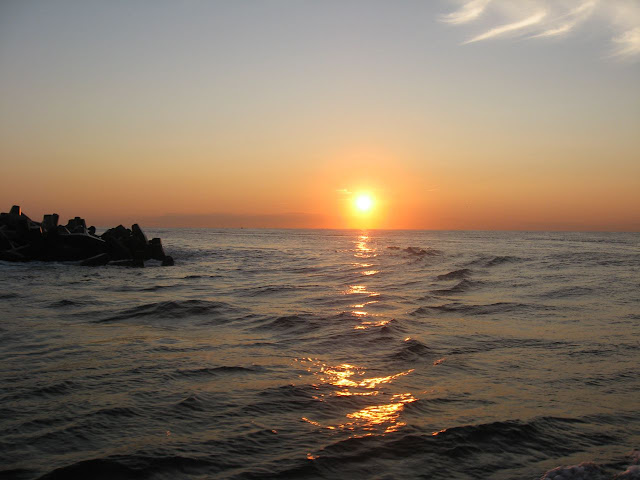 Rising Sun over the Atlantic
----------------------------------------
Years ago, while attending Warwick High School, my best friend Steve Mateyak and I did a lot of fishing.  Most of our angling was for catfish in local streams during the evening and into the dark of night.  We were always out trying to catch fish at one promising spot or another just for the fun of it. We even went deep sea fishing together a few times in New Jersey.  Graduation passed and we went our separate ways with me heading off to college and Steve heading off to work as a welder.  We drifted apart and lost contact but ran into each other on occasion at the high school football field where we had once both played for the Warriors as lineman. 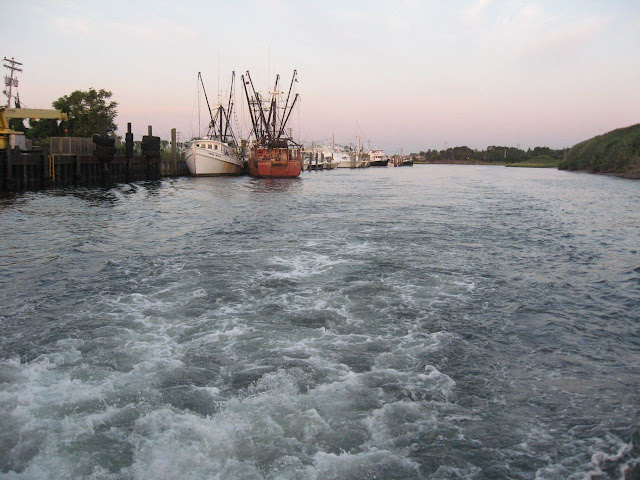 Leaving the Dock
------------------------------
Friday Night Lights were an opportunity to check the stands for Steve and his father who often watched from their regular spot on the corner of the northern end zone.  Steve Sr. had been running an annual deep sea fishing trip out of Point Pleasant, New Jersey for the past couple of years for family and friends.  I was invited to join the crew as a greenhorn mate aboard the Mimi VI.  In late August we met along the entrance to the Pennsylvania Turnpike and waited for the convoy of vehicles to arrive and assemble in the wee hours of the morning.  The drive was long and dark but it was a great time to catch up with how everyone was doing since we last talked.  We arrived in Point Pleasant and stopped at the only diner in town that was open at five o'clock in the morning. 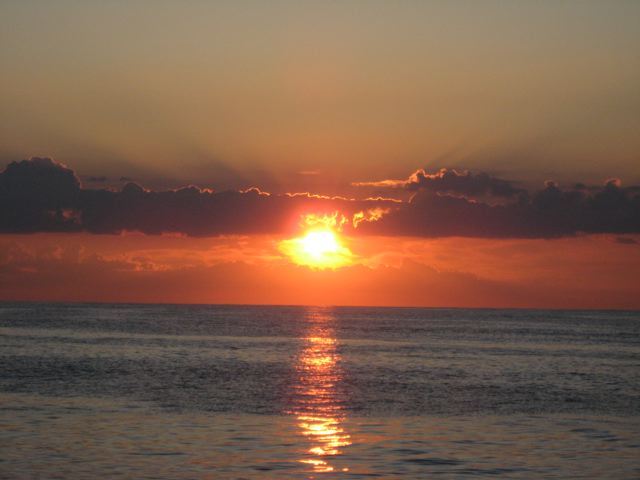 The Amazing Sun Rise
-----------------------------------
Breakfast was a challenge because we had to honor a strict time deadline when the boat was due to cast off.   Our group numbered in the mid twenties and the wait staff was short handed and excessively slow.  Also, you have to be careful what you order.  We were all really hungry but the sausage, bacon, and anything in the greasy food family was a huge risk with getting on a boat within an hour.  It might taste really good going down but if it comes back up... well, I think you get the idea.  We navigated through the menu with care and with luck, managed to make it to the dock on time.  The Mimi VI was a really nice mid-size boat, which would serve as our charter for the day.  We loaded our gear and secured our spots along the rail as the boat's engines came to life.  Soon we departed from the dock and proceeded through the bay toward the ocean inlet.  We entered the vast Atlantic Ocean just as the sun broke the eastern horizon. 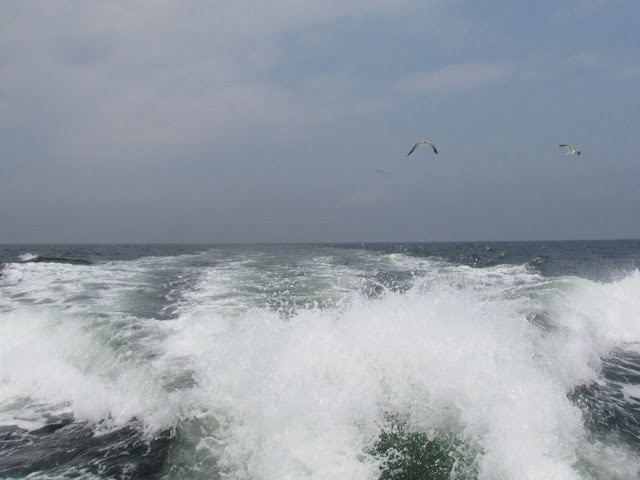 The Wake of the Mimi VI
--------------------------------------
The ride was about forty-five minutes to the fishing grounds where the flounder and sea bass were hopefully awaiting our arrival with a hearty appetite.  The boat ride was the highlight of the trip for me as the sun rising over the open water was an amazing sight.  We all sat back along the sides of the boat and enjoyed nature's show.  The ride was relaxing and fun with the cool morning air rushing with the speed of the boat.  Several dolphins served as guides as they swam along side our bow, jumping out of the water and keeping pace with our boat.  It was a real treat to see dolphins in the wild, free to play without boundaries.   We sailed north past the shore points of Sea Grit, Belmar, Asbury Park, and Long Branch along the New Jersey coastline.  The ocean's surface was calm and resembled a sheet of glass as it reflected the light of the rising sun.  The boat began to slow and the deck came to attention as the anglers prepared their lines with minnow and squid bait.  The boat settled and rocked to a stop.  The captain blew the horn and the lines dropped into the abyss. 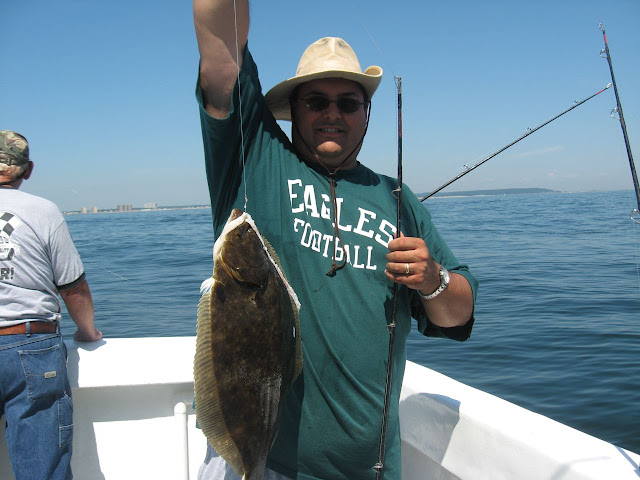 Hey, I Caught a Fluke!
----------------------------------
The trick was to let your line drop, hit the bottom of the sea floor and then bounce the sinker weight off the bottom to attract the bottom feeding fish.  The fish hit the line hard and are quite fun to fight and reel up to the surface, where one of the ship's mates would suddenly appear with a net.  Two types of fish were biting and you never knew what the result would be until they came into view in the water on their way to the surface.  The keepers were flounders, known locally as flukes, and the worthless fish were an ugly bony creature of the sea called Skates.  Both fish looked like they were leftover freaks of nature from the Jurassic Period but only one tasted good.  The other fun catch was sea bass, which were a normal looking fish, similar in appearance to their fresh water cousins, looking best filleted and framed by a frying pan. 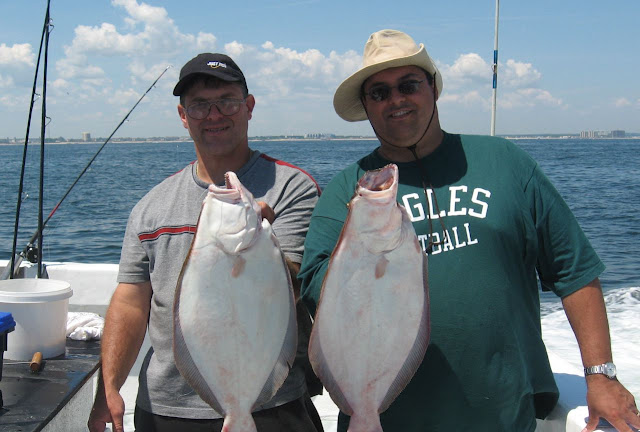 Two Old Linemen Still in their Prime
-----------------------------------------------------
The fishing proceeded for about a half hour until the the fish lost interest and fewer keepers were brought on board. The horn sounded periodically, the signal to pull up the gear as the boat prepared to move to a new location.  Sometimes we moved less than fifty yards, while other times, we cut our losses and traveled a good distance to a whole new location altogether.  The sun was now high in the sky and hot.  We all sat out some sessions to take a break inside the boat's spacious cabin to get something to eat and drink.  If you didn't get sick by this point, you were in the clear.  One of the guys had disappeared from the deck early to retreat inside the cabin with sea sickness.  He was down and out for the entire trip, which must have been a long and agonizing ordeal. We all took pity on him and gave him space. 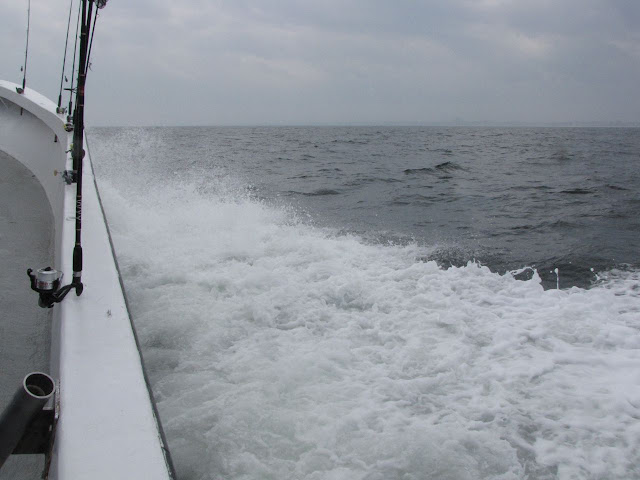 On the Move to a New Spot
-----------------------------------------
Sea sickness is the worst.  I've never had it but was on the edge one time on a previous trip.  It took all my strength to keep from going down for the count because I knew from watching others, once you go over the edge, there is little hope of recovery until you get back on stable, dry land.  I'll never forget when my brother and I were kids on our first deep sea fishing trip with my father and some of his friends.  The boat was small and my brother was so afraid of getting sick that he took an adult dose of Dramamine to help prevent motion sickness.  Well, it made him really drowsy and he laid down right on the deck and fell sound asleep while everyone continued to fish.  A storm began to come up and the rain began to fall with increasing rough seas.  We all huddled under the small boat's deck roof area to escape the rain and we all watched my brother, still horizontal on the deck, snoring while waves from the storm crashed down on top of him. It was surreal to say the least and we were more than a little worried about him, for a while.  However, he soon came around and was fine.   It was (and is still) a great story! 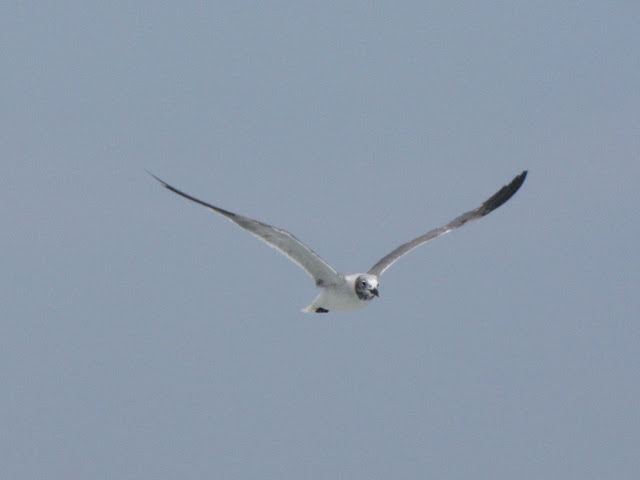 Bait Poachers from the Air
-----------------------------------------
The trip lasted about six hours and at one o'clock the horn sounded twice, signaling everyone to reel up the lines for the final time of the trip and stow all gear for the return trip south back to Point Pleasant.  We had gone north far enough to vaguely see the skyline of New York City on the distant northern horizon.  The Mimi VI headed for home with her twin diesel engines at full throttle.  It was a nice relaxing way to end our adventure as hard core fisherman on the Atlantic Ocean.  The mates of the ship were a great help during the entire trip and were gifted in troubleshooting solutions for tangled gear and all other challenges throughout the day.  They now went to work gutting, filleting, and bagging the catch for our coolers.  A small flock of seagulls followed in our wake hoping to pillage the sea for scraps.  I threw the leftover bait from my bucket into the air one piece at a time as they caught it in flight.  It was a lot of fun and sure beat feeding bread to the ducks at the park! 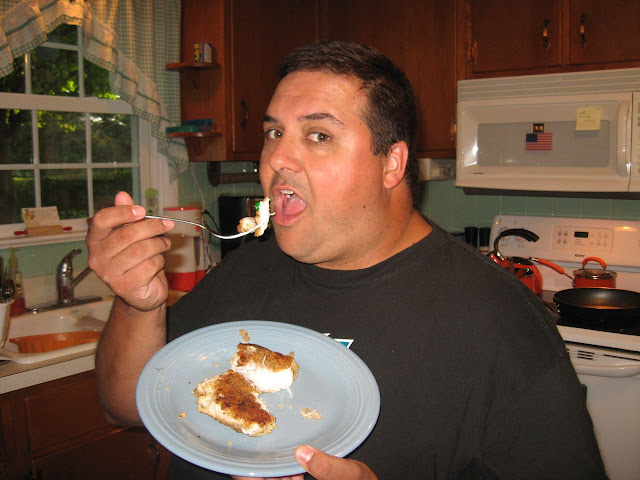 The Bounty of our Catch
--------------------------------------
We arrived at the inlet to the bay and exited the Atlantic Ocean for the dock where our adventure began.  The Mimi VI tied up and we said goodbye to the crew and a few new friends.  We loaded up our catch and headed back toward the turnpike for home.   Our early rise and long day at sea were finally catching up with us and we longed for sleep.  We took turns with the drive home so we could all get a little rest during the three hour trek west.  It was difficult to get our land legs back as our inner equilibrium levels continued to rise and fall with the rhythm of the boat.  The bounce stayed with me the rest of the day and later that night, the motion rocked me gently into a deep sleep. 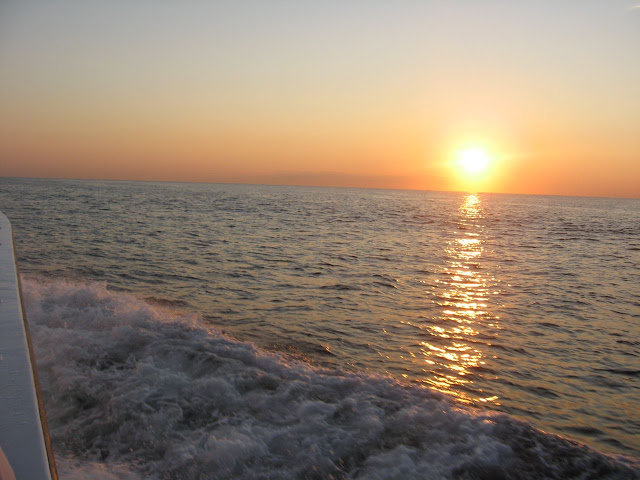 One More Shot of the Sunrise
------------------------------------------
It was a great trip and the weather (always a wild card) cooperated to create a beautiful day.  It was one of the most beautiful sunrises I have ever seen and I was glad I had my camera to record some images of the scene.  However, nothing compares to the real thing.  The sunrise over the water is really something to experience.  It was great to catch up with my old friend Steve and catch some fish just like the old days.   We plan to make it an annual get-together every August with a few visits in between at Grosh Field in Lititz each fall during football season. 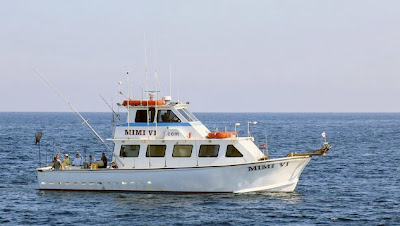