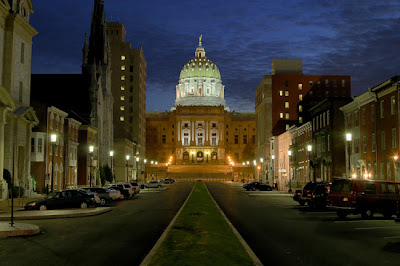 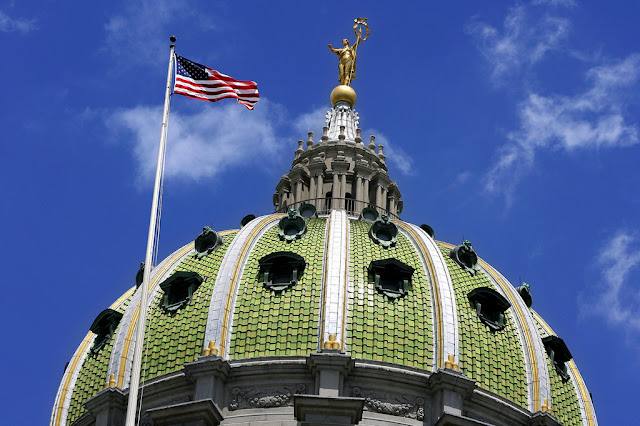 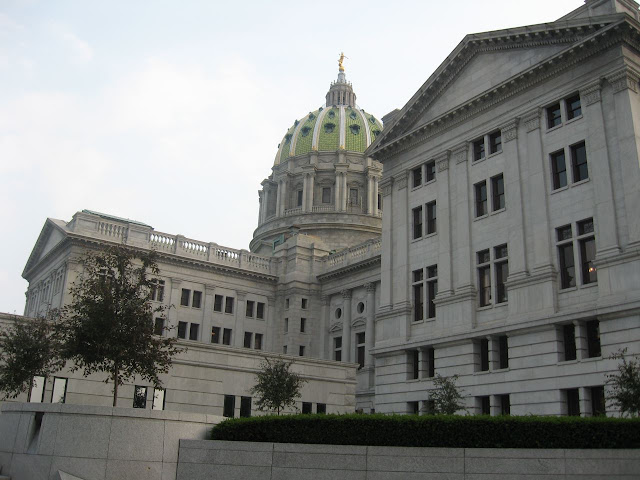 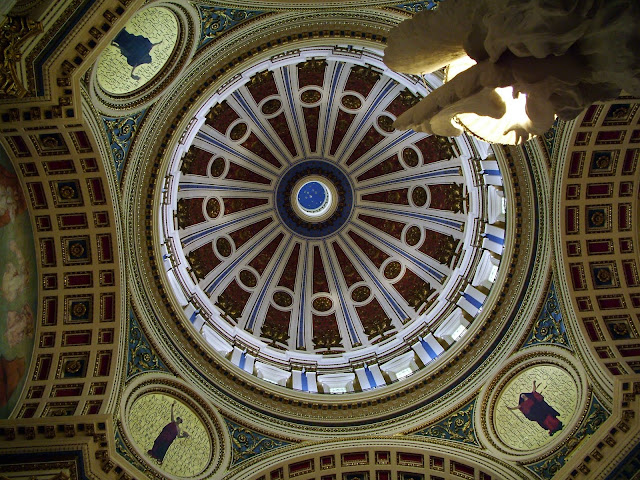 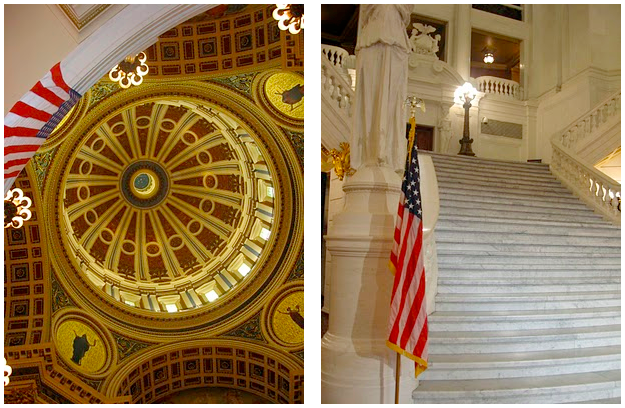 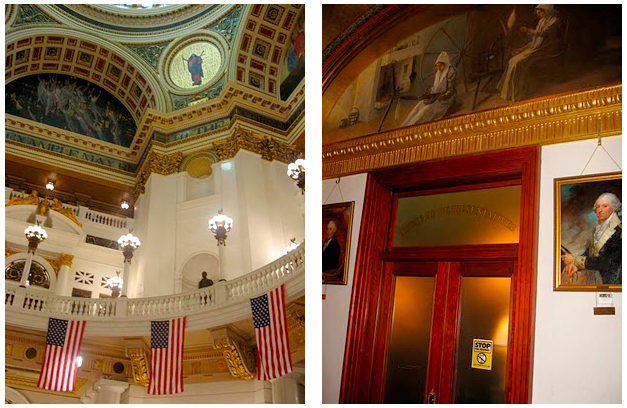 Moral Paintings Throughout
---------------------------------------------
After the fall of the capital during the American Revolution and with a new fight with Great Britain on the horizon that came to be known as the War of 1812, it was decided to move the state capital further inland from Philadelphia, far from enemy threats.  The site of Harrisburg was chosen because it was centrally located and a transportation hub that would make it an easy destination for lawmakers from the far corners of the Commonwealth.  The new capital city looked out over the beautiful Susquehanna River from the eastern shore.  The first state capitol building was called the Hill Capitol Building and was tragically destroyed by fire in 1897.  The state legislature was moved to a nearby Methodist church, where they conducted state business until a new building could be built.  The new replacement building project ran out of funding mid-construction and was never completed.  There was talk that the state government should be moved to Pittsburgh or even back to Lancaster, which would devastate the local economy of Harrisburg that had been built around the business of state government.  The city of Harrisburg had to provide a new capitol building, to remain the chosen site of Pennsylvania's state government. 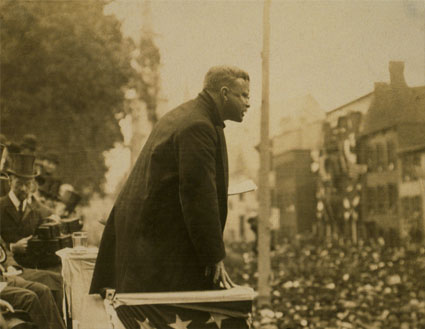 In 1902 a new plan was quickly put into action to build a new grand capitol building that could house the bulk of the state government offices and keep the state capital from moving away.  The new building was completed four years later at a cost three times the price originally quoted.  This led to a scandal investigation that ended in several arrests, including the buildings designer, Joseph Miller Hudson.  Political scandals are as old as history itself!  Hudson's Italian Renaissance style building was dubbed the Palace of Art because of the abundance of sculptures and mural paintings found throughout the building's interior.  Much of the artwork depicted scenes from the state's history, including several stained glass windows.  The building's dedication ceremony in 1906 was attended by President Theodore Roosevelt, who claimed it was the most beautiful building he had ever seen! 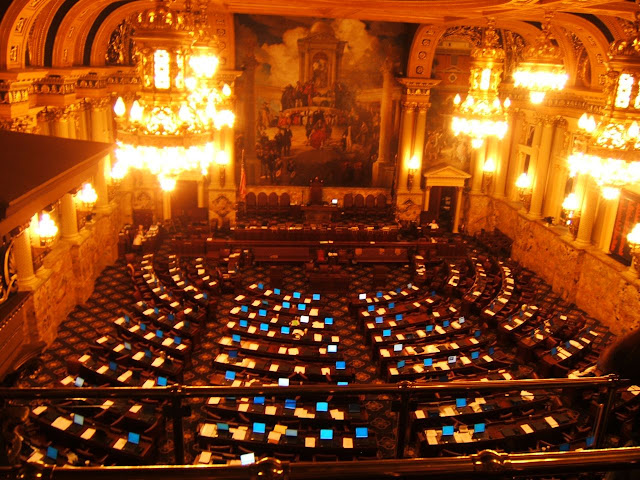 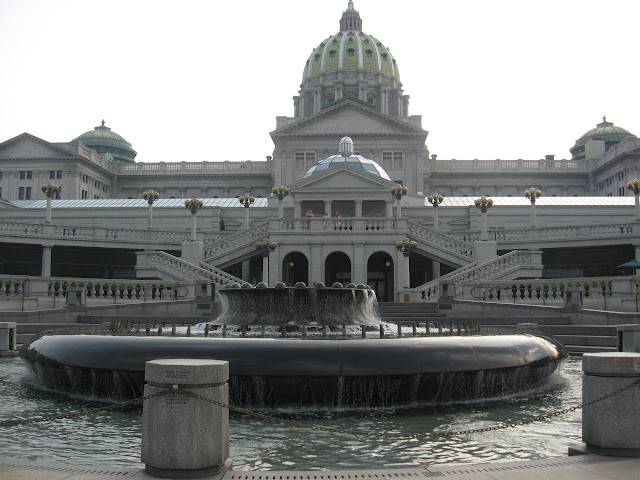 Capitol Building / Rear View
-------------------------------------------------
The impressive building's highlight is the 272 foot tall, fifty-two million pound rotunda that was designed to resemble Saint Peter's Basilica in Rome.  The rotunda is what sets the capitol building apart and identifies the structure from the rest of the Harrisburg skyline.  The massive five story building was constructed of granite, quarried from the state of Vermont.  The building contains 475 rooms on four floors accessible from the grand marble imperial staircase, designed in the image of the famous staircase at the Palace Opera House in Paris, France.  The Capitol Building is surrounded by the Pennsylvania State Capitol Complex which contains forty-five acres, where fifteen of the state's government buildings and administrative offices can be found.

In 1982 the Capitol Preservation Committee was formed to preserve the beautiful building and the historical contents inside for the future generations of Pennsylvania.  It is an ongoing process that has yielded ongoing results.  Over 100,000 people take the free tour every year and it is well worth forty minutes of your time.  You can literally see your state tax dollars at work!  The kids were impressed by the size and scope of the building, which encompasses a full two acres of land in the center of the city. It was time for lunch and time to explore the other buildings within the Capitol Complex.  The rear side of the Capitol Building was equally impressive with a symmetrical design containing multiple balconies and cascading fountains.  The entire area is a beautiful walk and a fun place to explore, especially the waterfront park and walkway along the Susquehanna River.  Take the time to check it out for yourself! 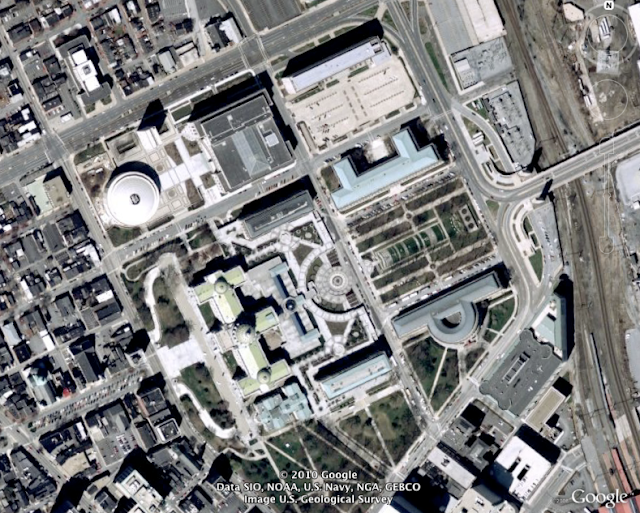 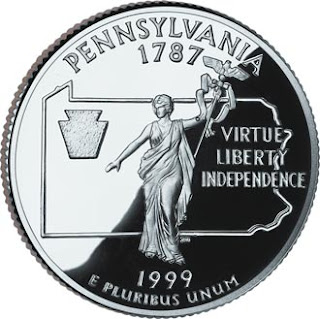