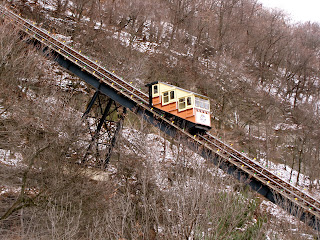 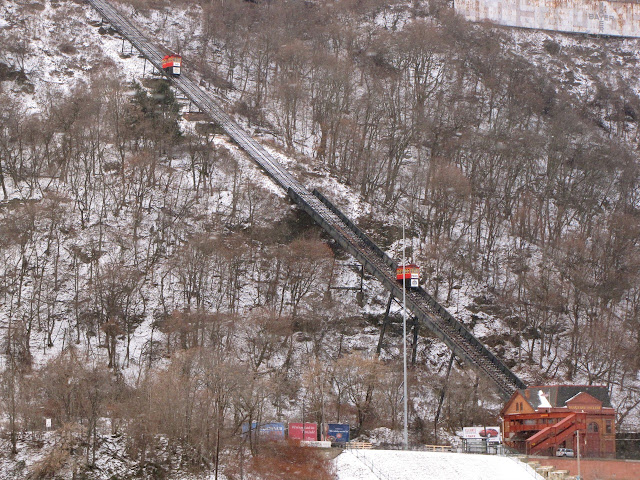 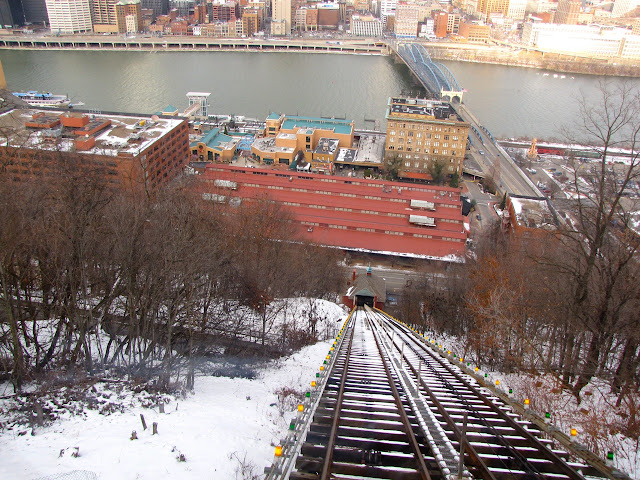 View from the Car near the Upper Station
-----------------------------------------------------------
The people who lived on top of Mount Washington, formerly known as Coal Hill,  needed a better way to get to their places of employment far below along the river banks within the city.  Steep steps, slippery foot paths, and unreliable winding roads were falling short.  I can't imagine walking up Mount Washington after a long shift of manual labor, especially in winter or rain!  The newly arriving German immigrants moving into the expanding city looked back to the Old Country for a potential solution.  Cable car systems were common in mountainous Germany and soon the first horizontal railway was built.  The Monongahela Incline was completed on May 28, 1870  and offered an easy alternative to the previous means of travel.  It became so popular that soon construction began on several other inclines including the nearby Duquesne Incline. 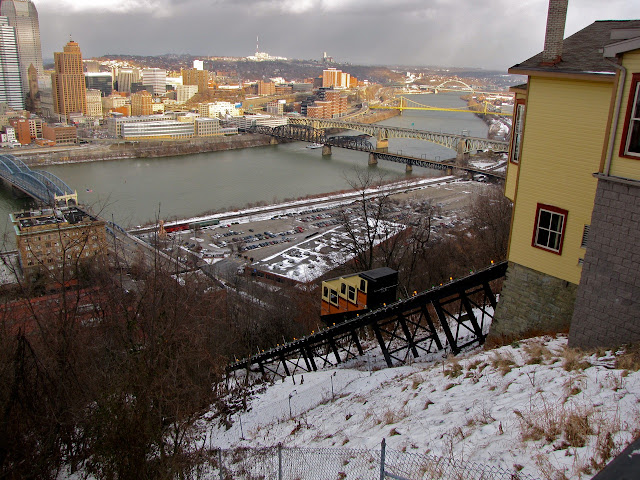 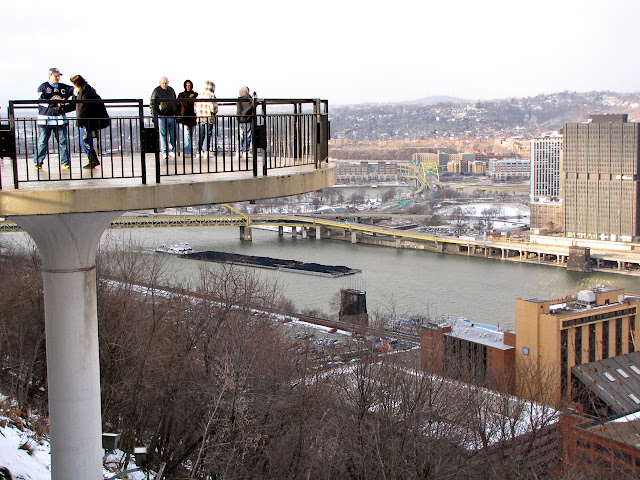 View of Observation Deck
------------------------------------------
As the public became more independent of public transportation, several incline systems began to go out of business until only two remained in use.  Today the Monongahela and Duquesne Inclines are the only surviving horizontal railways still in operation in Pittsburgh.  They were saved by the Port Authority of Allegheny County in 1964 who continue to own and maintain their operation today.  The Monongahela incline was declared a historic structure by the Pittsburgh History and Landmarks Foundation in 1970.  Together the two organizations work in tandem to keep the historic railway running smoothly. Over the years both inclines have gone through improvements and renovations to ensure their future survival. Although a popular tourist attraction, half the riders today continue to be daily commuters from the top of Mount Washington. 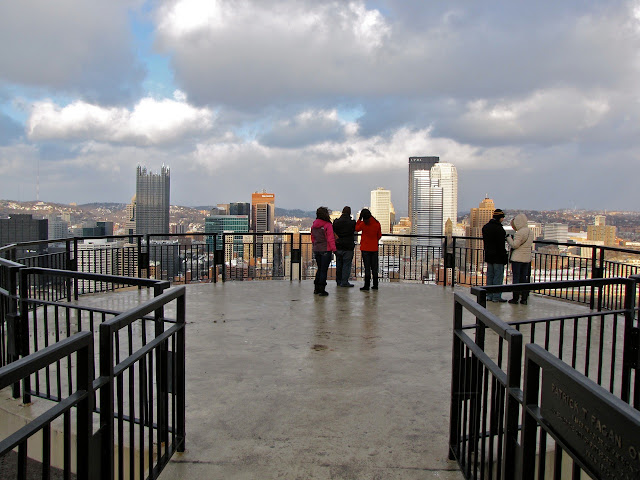 The Observation Deck Entrance
--------------------------------------------------
My friend Brian and I were looking for the way to the famous incline to end our afternoon of sightseeing.  Pittsburgh is not an easy city to navigate even with the help of GPS technology.  The confusing streets seem to be absent of any pattern and travel every which way but straight.  We finally found our destination by sight and began looking for the parking lot of the Monongahela Incline.  We pulled over onto a ramp we hoped would take us to a free parking spot but instead took us through a tunnel all the way through Mount Washington!  We exited the long tunnel on the other side and quickly turned around to backtrack to our target destination.  Halfway back through the tunnel we realized it was two lanes of one-way traffic travel and we were now heading into headlights coming directly at our car!  Luckily we only encountered two vehicles and were able to exit the tunnel without incident and accompanying news coverage!  I learned a new term while in Pittsburgh... Tourist + Moron = Touron!  Without doubt, we were a couple of extreme tourons that day! 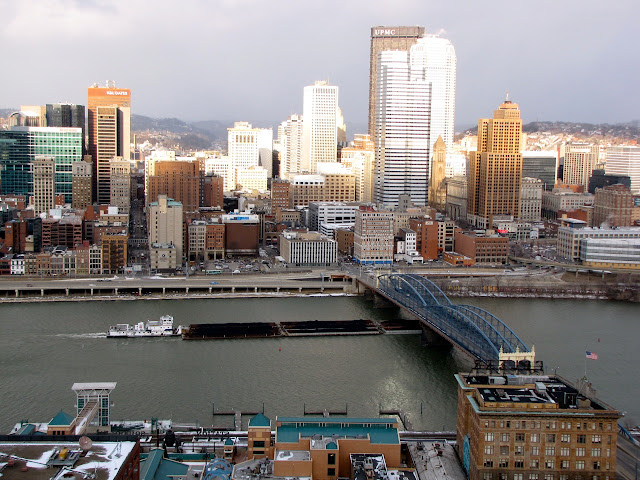 We entered into the restored Monongahela Incline lower station and waited for the next car to descend to take us to the top.  It is an 367 foot climb to the top and is accomplished by thick cables that are driven by a powerful electric motor at the upper station.  The electric motor replaced the original steam powered engine in 1935.  The weight of the car is counter balanced by a second car making the opposite trip down the mountain.  There was no conductor or place to buy a ticket as all transactions were handled at the upper station.  However, a sign warned that exact change would be required to pay for the reasonably priced fare of $2.25 per person each way.  It was really cool watching the massive car slowly descend down the tracks right at you from large observation windows from inside the station.  The car safely eased to a stop on the track to our right and we took our seats with a handful of fellow tourons inside the large car.  We waited about a minute before the doors automatically closed and the car began to move.  Hold on tight kids, here we go! 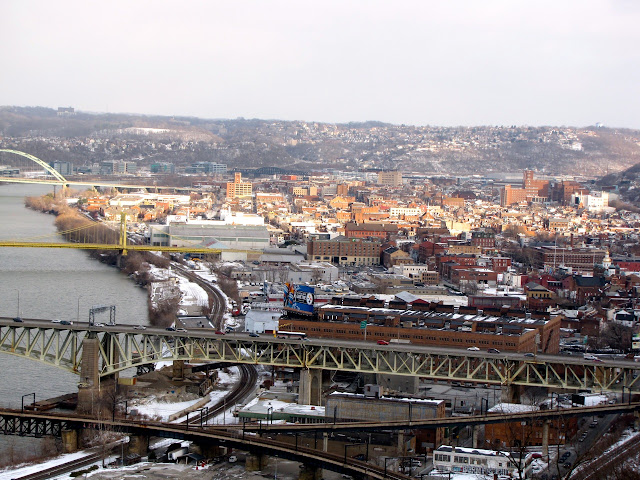 The View of the South Eastern Shore
------------------------------------------------------
The car was divided into three separate compartments and could hold a maximum of 23 passengers or 50 tons.  I was questioning whether it was a good idea to try this right after eating a huge lunch at Primanti Brothers but tried to put that thought out of my mind.  I sat in the front section of the car with a full view of the track below as we slowly climbed ever higher.  I put my hands up in the air roller coaster style to demonstrate my bravery but then realized this was a very touron-like thing to do and quickly retreated back into anonymity.  It was a little nerve racking watching yourself climb up the track along the 35% grade without being able to see behind you.  The station continued to get smaller and smaller and I had seen too many bad movies from the 70's and amusement park rides to feel comfortable.  Every time the car bumped on the track or made a noise I expected us to be released into a free-fall drop for the thrill of a lifetime that would end in eternal darkness!  Brian reminded me that there was a safety cable to prevent such endings but it was about 1/10 the size of the main cable and we had just eaten a very big lunch! 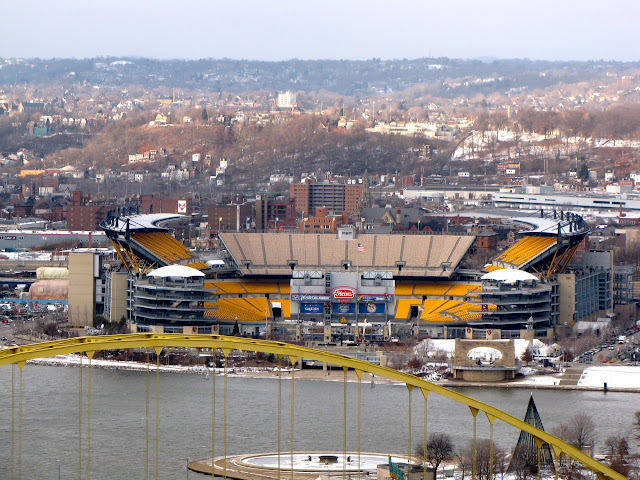 
We eased into the upper station and safely made it to the top.  We paid our fare with the help of a friendly attendant who put our exact change and bills into some type of old school ATM and gave us our return ticket for the trip back down to earth.  We ventured outside into the strong icy Pittsburgh wind that whipped at us as we made our way to the observation deck.  The view was truly amazing and is known as one of the top ten spots to view a city in America.  It was a gray day with periodic snow squalls but the view of the city below was worth risking our lives on the incline.  We were so brave!  I took as many pictures as I could before the windchill pushed us back toward the station.  It was much colder up top than down below.  A series of two tug boats pushed their collection of barges filled with coal through the river below demonstrating the continued economic importance of the Forks of the Ohio. 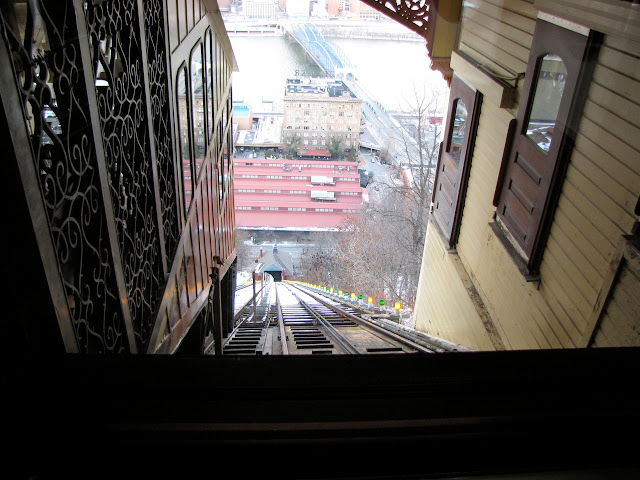 Control Room View of Track
----------------------------------------------------
We reentered the station to escape the wrath of Mother Nature and prepared for our descent.  The friendly clerk allowed me to enter into the control room to get a picture of the view from the extreme top of the incline railway.   We entered the car from one of three tiered doors and took our seats again in the front section of the car.  We had already survived our tunnel fiasco and were in the mood to continue to tempt fate.  As we slowly descended at a rate of six mph, we could watch the incline's sister car make it's climb up Mount Washington toward us.  One of my favorite World War II movies came to mind, Where Eagles Dare starring Clint Eastwood and Richard Burton.  My favorite part is the cable car scene in the Alps where they were fighting to escape the grasp of the treacherous Germans.  I was replaying the whole movie scene in my mind until I turned around to see a young couple making out in the section of the car behind me, which ruined the illusion.  The other car climbed past us at the midpoint of the track and the city below continued to grow in size. 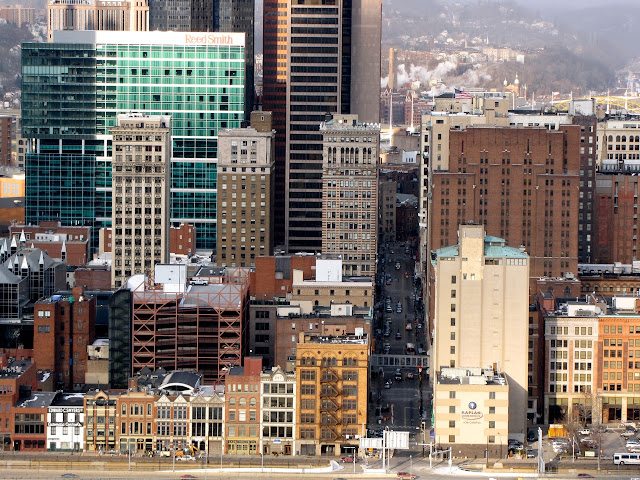 Center City Pittsburgh / Zoomed Image
------------------------------------------------------
We made it to the bottom and discussed a return trip in the spring or summer to take in the view again during a different season.  It would also be a great view to take in after dark.  We also wanted to travel on the Duquesne Incline near the Fort Pitt Bridge, which is a little higher... but that's another story.  We were two cold and tired tourons who were looking forward to a night of rest in our hotel room after a well deserved dinner at Primanti Brothers!  Sleep Well Campers! 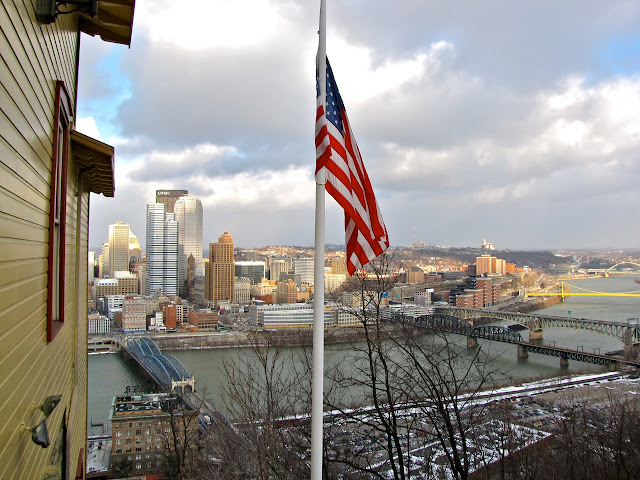 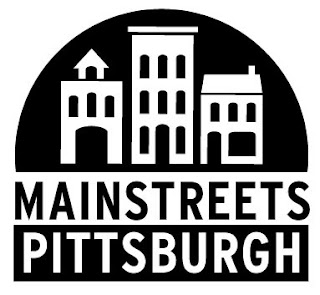