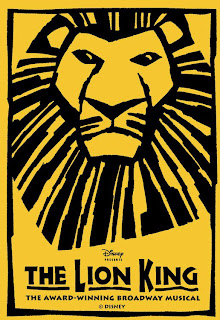 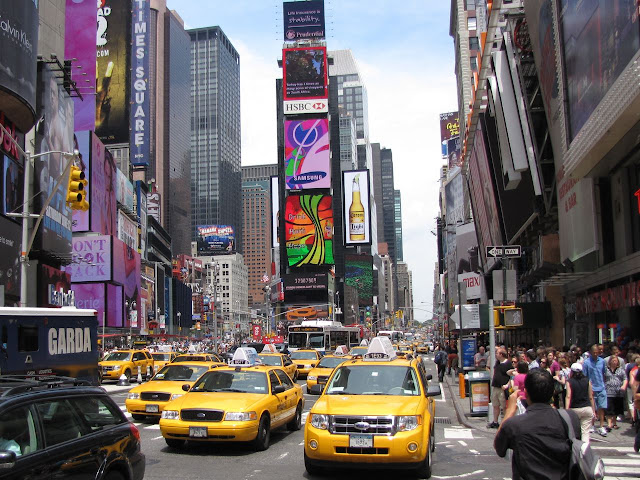 Taxi Cab Assault / Times Square
----------------------------------------------
My daughter Katelyn's senior year was coming to an end.  The highlight of her high school experience was being involved with the highly acclaimed chorus program at Warwick High School where she participated in many play productions and concerts. She met a lot of people and made some really good friends who were now off on a field trip to the Big Apple to see a Broadway play.  I was invited to come along as a chaperone and was about to see my first professional theater performance.  Katelyn and I have been to New York City many times but have never made it to Times Square and the Theater District so we were both looking forward to a new experience at one of our favorite destinations.  I love traveling by tour bus and leaving the stress to a paid professional.  The ride up was fun and I made some new friends who were fellow chaperones, while Katelyn sat in the back with her "peeps"! 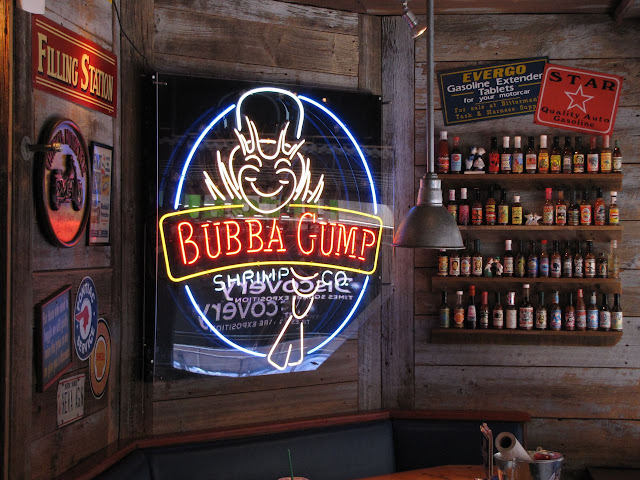 Bubba Gump Shrimp Company
-----------------------------------------------
We had our choice of two shows when we signed up for the trip. Half the group would be going to see Phantom of the Opera and the other half the Lion King.  Katelyn and I had always wanted to see the Lion King since we saw a small production down at Animal Kingdom in Florida while visiting Disney World many years ago.  Upon arrival, we had time for lunch and the group decided to try the Bubba Gump Shrimp restaurant right on Times Square.  When Katelyn heard it was a fish restaurant, she wasn't exactly thrilled!  I ensured her there were other things on the menu and she would find something to her liking.  She decided to be daring and try something new by ordering the fish and chips platter.  I also decided to be brave and went with a spicy shrimp gumbo over rice.  I found my meal delicious but very spicy, Katelyn was trying to figure out what she had actually ordered, and concluded she wasn't happy with our choice of eateries.  The restaurant was themed with movie references and memorabilia from the film Forest Gump.  Katelyn recently watched and enjoyed the movie in school but was so stressed out over her lack luster lunch that she never made the connection.  She confessed she had been preoccupied with visions of McDonald's! 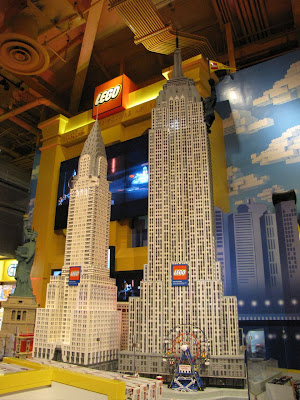 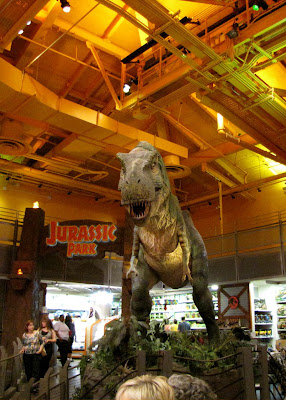 Toys R Us / Times Square
-----------------------------------------------
After lunch we had a little free time and crossed the street to visit the huge Toys R Us store to see the life-size fun inside.  We only had a few minutes before we needed to make our way to the Minskoff Theater so we had to make a light-speed tour of three floors of dream-like toys.  First, was the ferris wheel that you could ride with famous toys for ride cars.  Next, we encountered Lego Land with large plastic brick sculptures of the Empire State Building, complete with King Kong, the Statue of Liberty, and other famous buildings of the New York City skyline.  A few steps away we were suddenly in Jurassic Park looking up at a life-size tyrannosaurus rex towering over us.  It moved as if the intimidating creature were alive, as its mouth opened wide to expose rows of razor sharp teeth.  The yellow eyes darted around as if the prehistoric carnivore was searching for its next meal.  We escaped up the escalator to safety and took refuge in the life-size Barbie doll house.  Soon our free time minutes were up and after checking out the Toy Story 3 display, we made our way out of the giant toy chest in search of the grown-up world outside. 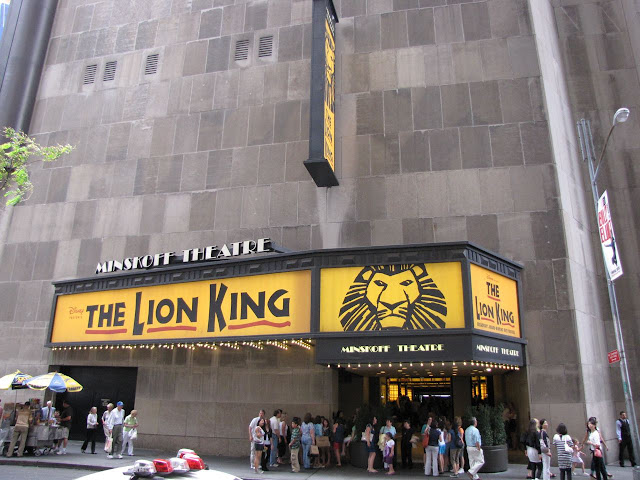 Minskoff Theater / Times Square
-----------------------------------------------
We made our way to the Minskoff theater and met up with the rest of the kids and chaperones in our group.  Everything was close by and easy to get to, especially when guided by someone who knew the area well and had been to the Theater District many times before. We entered and were processed through quickly without having to wait.  We went up a series of escalators and visited a small souvenir stand to pick up one of the pins Katelyn and I collect from all the places we visit, plus a key chain, and t-shirt.  Then, up steps we went to the next level where there was an incredible view of Times Square.  The entire wall of the theater lobby facing the famous square was all glass giving a city pigeon's view of the bustle and congestion far below.  It was an amazing view of the square and I was able to get a series of really good pictures.  You can check out the entire Times Square album at my Flicker photo sets page at... 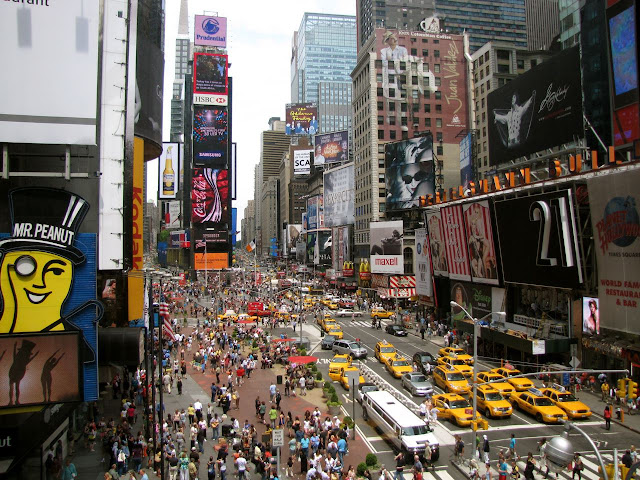 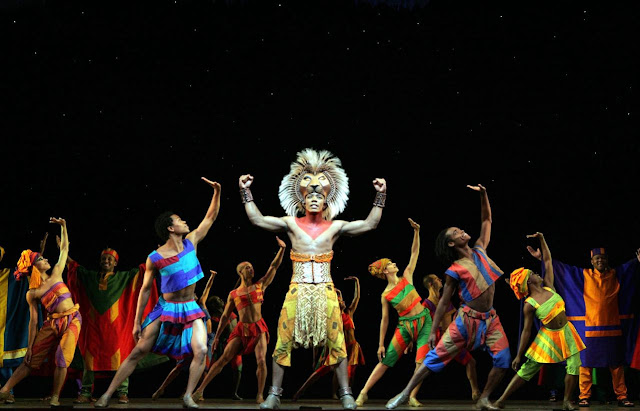 The Lion King Cast
(Photo Credit / Disney Presents)
---------------------------------------------
As in the animated film, the introductory music score was powerful and pulled the audience into the full scene from the very start.  In fact, I am humming the song Circle of Life as I write this posting and probably will continue to do so for at least a few days.  The actors played out the story with a combination of people acting in symbolic decorative masks while others used physical props that moved to mimic the movement of live animals. Several of the main actors wore masks but others worked with life size puppets where the audience needed to focus on some parts of the actors and ignore others.  My favorite character was the colorful bird Zazu who was the official assistant to the Royal Court of Mufasa.  He was represented by a puppet worked by actor Jeff Binder who was dressed in a colorful suit costume that mimicked the blue, white, and orange colors of Zazu.  Soon the two physical parts playing Zazu merged and became a seamless, single character. 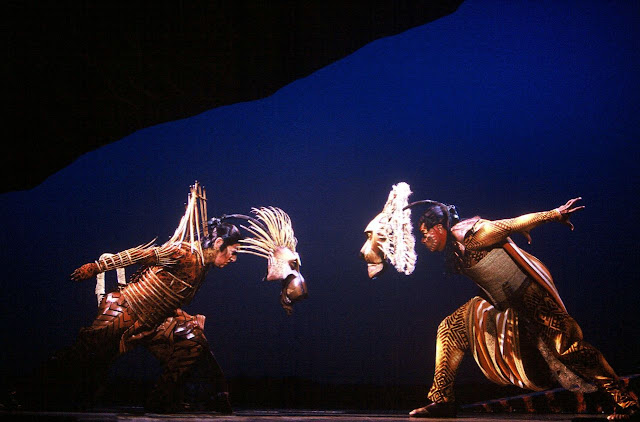 Scar Challenges Mufasa
(Photo Credit / Disney Presents)
---------------------------------------------
The actors were very physical and athletic in their performances, which included dance and climbing the ever changing stage.  It was amazing how many of the actors ran from one spot to another as the stage revolved to new positions in perfect sequence.  The stage floor was full of hydraulic movement that included the rise and fall of Pride Rock. Actors appeared periodically within the audience area with tall poles swinging birds in flight.  Act One had a total of thirteen scenes followed by a fifteen minute intermission.  It was nice to get a break, to stretch our legs and take a little walk back to the spectacular view of Times Square.  A warning bell sounded to signal the conclusion of the intermission and we scrambled back to our seats.  The lights dimmed once again and Act Two began, which would include the final seven scenes of the performance. 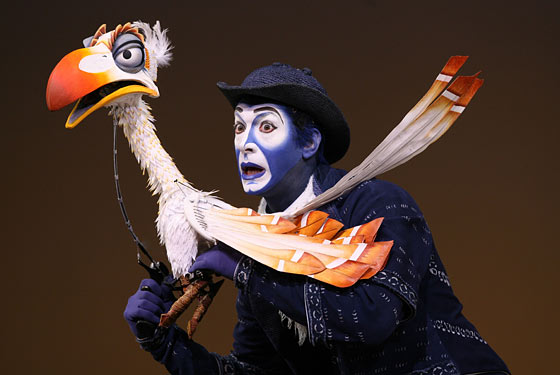 Actor Jeff Binder as Zazu
(Photo Credit / Disney Presents)
---------------------------------------------
The music was outstanding and the familiar songs from the movie would be stuck in my head for more than a week.  The Lion King musical premiered on Broadway on October 15, 1997 at the Amsterdam Theater and has been going strong for more than thirteen years.  It has changed locations several times and had only been at the Minskoff theater for a short time.  The top show at the New Amsterdam Theater right now is the musical theatrical production of Mary Poppins, which debuted in 2006.  There has also been Broadway productions of The Little Mermaid and Beauty and the Beast.  The stage company of Disney Theatrical has become a major presence in New York's Theater District.  Maybe Pixar will get into the game with Toy Story.  I can see Buzz and Woody singing a duet together with Mr. Potato Head supporting as a baritone! 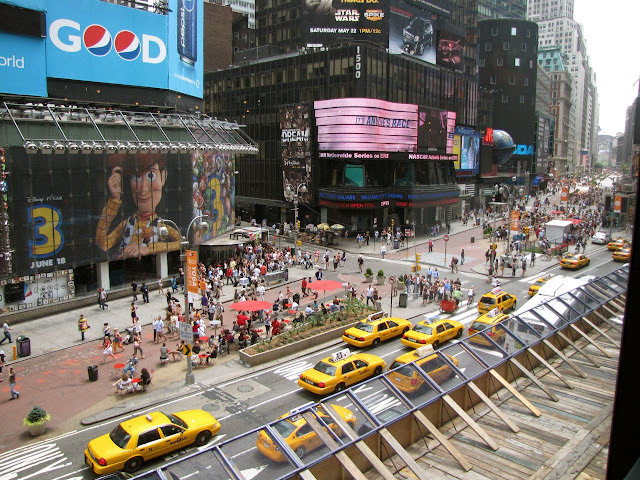 After the play, we went as a group across the street to the Marriot for an Italian buffet.  We met up with the other half of our group who had seen Phantom of the Opera at the Majestic Theater. who also had rave reviews of the performance they witnessed.  We enjoyed a meal at the beautiful hotel and even Katelyn found a few dishes that met her approval in the buffet format!  She was really hungry by this point!  Following the excellent meal at the Marriot we had a little more time to explore the Broadway area before our bus was scheduled to pick us up.  We checked out some more souvenir shops and took in the sights.  I thought I saw Johnny Depp surrounded by a crowd of people who were taking turns getting their pictures taken with him.  I snapped several pictures myself until I realized I was standing in front of Madame Tussuad's Wax Museum.  It was a clever way to drum of interest and new business.  Maybe next time! 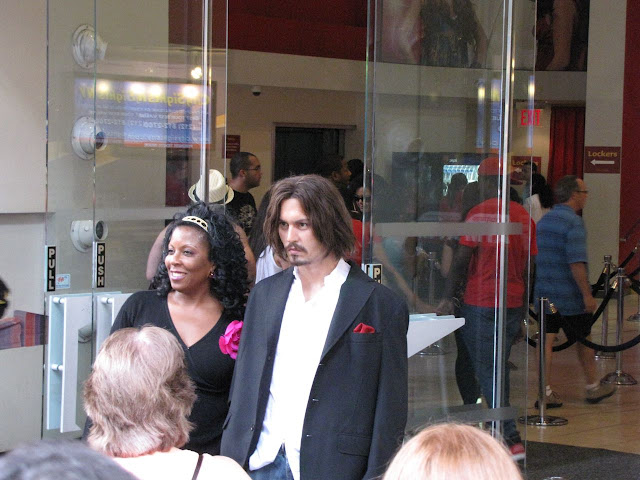 Johnny Depp in Life-like Wax
----------------------------------------------
What a fun day and a great experience for both Katelyn and I.  The play was great and at least I... thought both meals were excellent.  Katelyn enjoyed the time with her friends as I tried to keep my distance as Dad and tried to play the role of chaperone in the shadows.  Katelyn and I plan to come back soon with the rest of our family to explore more of our favorite city to visit.  Thanks to the Music Department at Warwick High School for organizing such a great trip to compliment their orchestra and chorus curriculums. 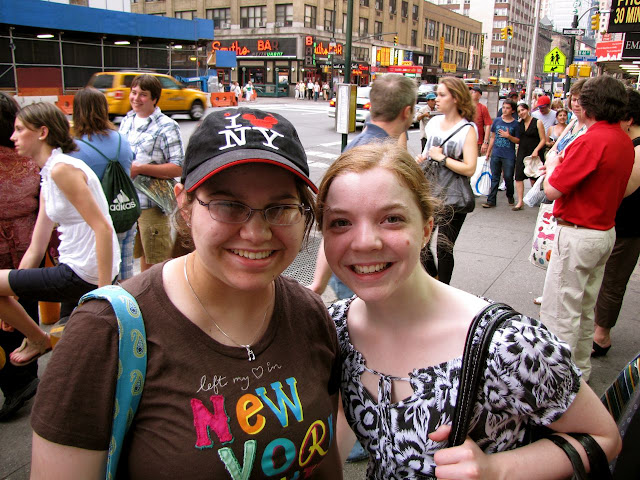