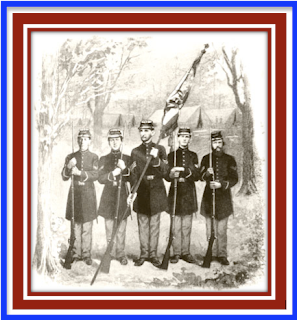 As part of a group tour sponsored by the Pennsylvania State Museum Commission, we were studying primary sources in the form of historical artifacts.  In this segment of our journey through Civil War history, we were on our way to see the Pennsylvania Capitol Preservation Committee's state military flag restoration and storage facility in Harrisburg.  Wow, that's a mouthful!  It was located a few blocks from the Capitol Building but our bus seemed to be lost as we drove though an old section of the city that seemed "old school" industrial.  We pulled up to an aging large brick building that looked like it was formerly used as some kind of a factory or warehouse.  It reminded me of one of the old red brick tobacco warehouses that still exist in Lancaster City. There was no parking lot so we unloaded from the bus on the street and walked up the cracked side walk to the aging front door. 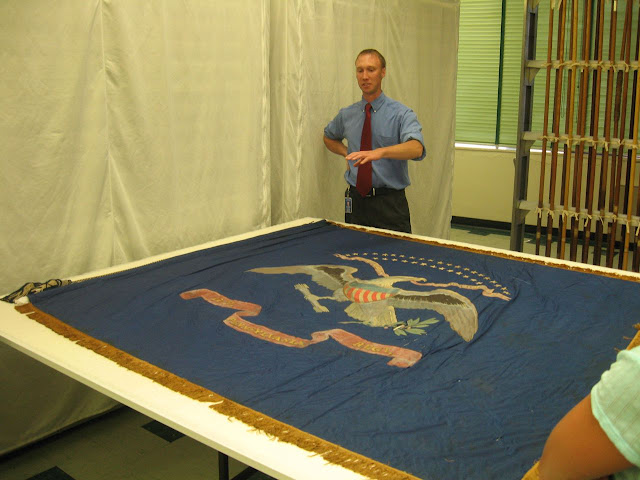 Pennsylvania Cavalry Flag
---------------------------------------------
We were met by a friendly young man dressed in a shirt and tie named Jason Wilson who worked for the PA Capitol Preservation Committee as a research historian.  Apparently, the flags are available for the public to view but you must make an appointment in advance and meet a state representative at this location for a tour.  All visitors must be supervised during their visit.  Upon entry, we scaled some metal steps and entered a room on the second floor.  When the lights came on, I was amazed at the contrast of the building's modern interior compared with the aged exterior.  The room was bright white and climate controlled with special lighting designed to prevent damage to the light sensitive contents of the room, which were hidden from view.  Scott began his tour explaining the high tech facility which seemed like a top secret laboratory hidden within the city. 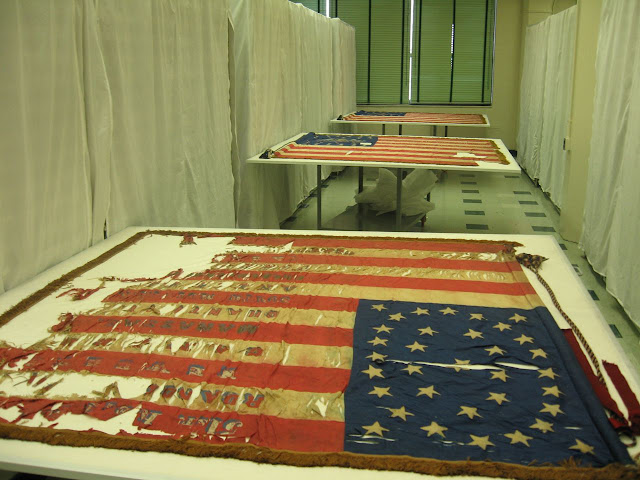 Various Stages of Decay
-----------------------------------------
Pennsylvania was the only northern state that furnished flags for their Union regiments during the Civil War.  Following the war, the state government asked for the flags to be returned to the capitol so they could be stored as historical artifacts.  This request was not welcomed by all veterans who considered the colors of their units sacred and not all who had them were willing to give them back.  It was decided the flags could be returned in a ceremony on Independence Day in Philadelphia at Independence Hall with former generals George Meade and Winfield Scott Hancock officiating the event as the former heroes of the victory at Gettysburg.  Pennsylvania Governor Andrew Curtin praised the veterans in attendance and by the end of the event, the state's flag collection now totaled 270 colors and continued to slowly grow as new flags were donated over the years. 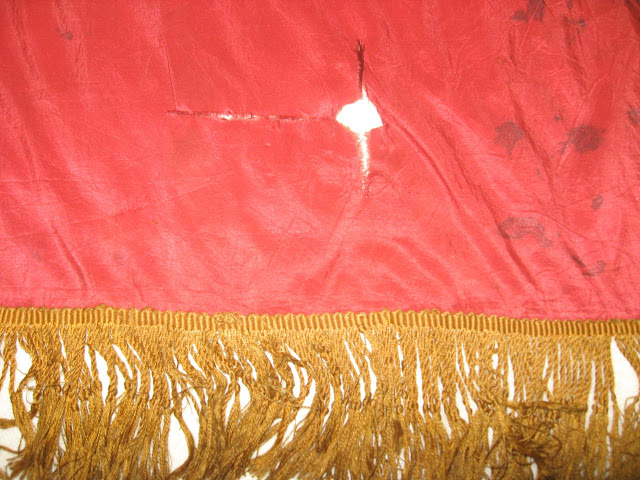 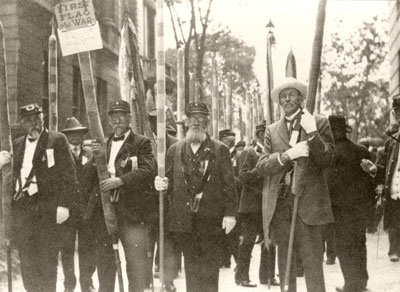 Veteran Flag Parade 1914
(Photo Credit / PA State Archives)
-------------------------------------------------
The flags sat as a silent vigil to the state's Civil War veterans and their effort to preserve the Union.  Flags from the Spanish American War were also included in the cases where they all remained undisturbed for over seventy-five years.  Upon visual inspection in 1929, the flags seemed to be continuing to deteriorate over time and it was discovered that the cases may not have been as air tight as first thought.  However, state officials did not take action and the flags continued to sit within the cases until a reenactment group requested their regiment's flag be removed for preservation in 1981.  The 87th PA Vol. Co. A's request was granted and the flag went through restoration work at the reenactment group's expense on the 75th anniversary of the flags original resting date within the display cases.  This story helped gain attention and raise funding for the preservation of all the flags while they could still be saved.  The following year, the Pennsylvania Capitol Preservation Committee was formed to remove, restore, preserve, and relocate the flags to a safer location. 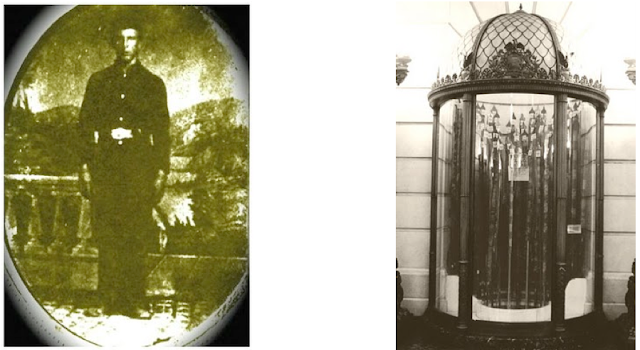 Private David Lichty / Capitol Rotunda Flag Case
---------------------------------------------------------------------
Inside the old / new storage facility, Jason showed us how the flags had been unfurled and detached from their staffs, were opened and laid out on large flat trays for safe storage.  Some of the flags were in very bad shape and had partially disintegrated.  The original flags were made of silk fabric and hand painted by flag artisans.  The fragile material became victims to their previous storage in unfavorable conditions.  A preservation laboratory in a nearby room works to prevent further decay.  The flag staffs are stored separately and can be as unique as the flags themselves.  Many showed battle damage of various nicks and gouges in the wood.  One particular staff of interest contained a bullet hole through the middle.  Other staffs consisted of a polished tree limb that had replaced the issued staff pole when it broke on the field of battle.  The staffs were neatly arranged in numbered slots within tall narrow container drawers for their protection.  Today almost 400 flags are contained in the collection. 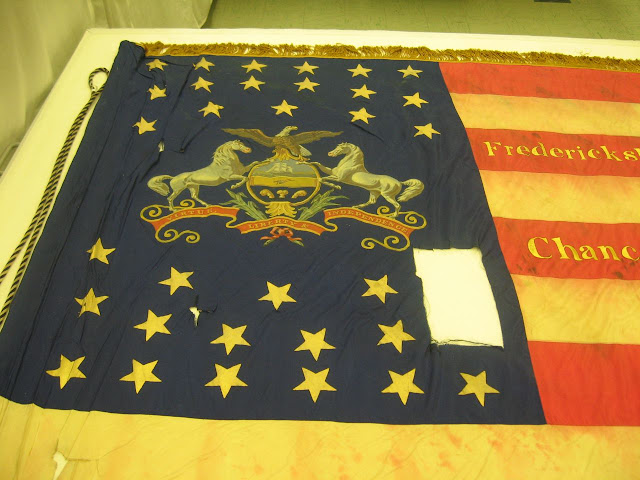 122nd PA Vol. Co. C Flag
---------------------------------------
Jason pulled any flag you requested to see and many visitors come to see a single flag or two they have some personal connection with through their own family's heritage.  I asked him to pull the flag of my great-grandfather, David Lichty's regiment, the 122nd PA Vol. Co. C from Lancaster County.  At age 18 my great grandfather left his rural Terre Hill community to sign up for a nine month enlistment.  He reported for basic training at Camp Curtain in Harrisburg and was soon sent south to defend the nation's capital.  He saw action at the battles of Fredericksburg and Chancellorsville before mustering out with his company on May 15, 1863.  He reenlisted as a member of the 2nd PA Cavalry and served for the remainder of the war.  During his service with the cavalry, he contracted an intestinal disease described as "camp fever" that plagued him the rest of his life and earned him a small medical pension until his death in 1910.  His old unit's flag was riddled with several bullet holes, evidence of the action it experienced. Some of the flags like the 122nd, had neat square patches cut from the flags center.  These may have been cut out by soldiers at the conclusion of the war to take home as souvenirs of their beloved regimental colors.  Maybe my grandfather had a cherished patch of blue silk in his possession at one time? 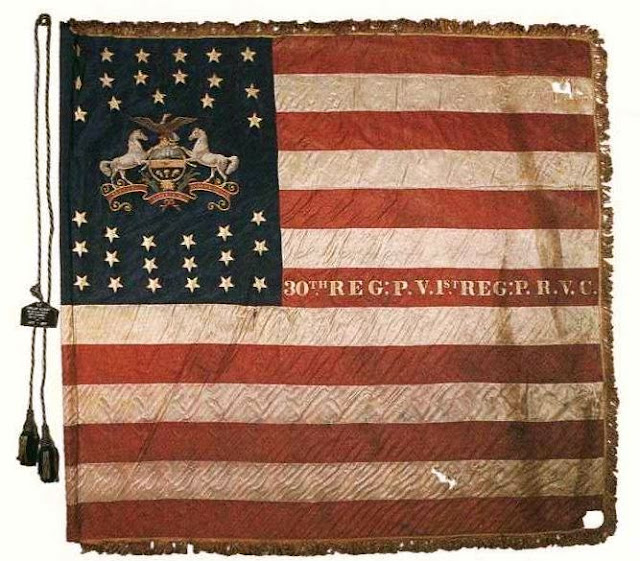 Next, I asked Jason to pull the flag of the 30th PA from Lancaster County, the unit in which I participate as a Civil War reenactor.  He soon pulled another flag from the collection, which showed the vast difference between one that had been saved and another that had been almost lost.  The second flag was barely a flag at all, as there was little left remaining of the once proud symbol that men gave their lives to defend.  It was sad to see but at least they were able to preserve some evidence of the remnants of the colors that once led men across the open fields of battle to face the enemy.  It was very clear, if the Pennsylvania Capitol Preservation Committee had never formed thirty years ago to take action to save the historic flags, they may all have been lost to decay.  A special thank you must go out to the members of the 87th PA Vol. Co. A for sounding the alarm and bringing needed attention and financial support to the flag collection's  desperate plight. 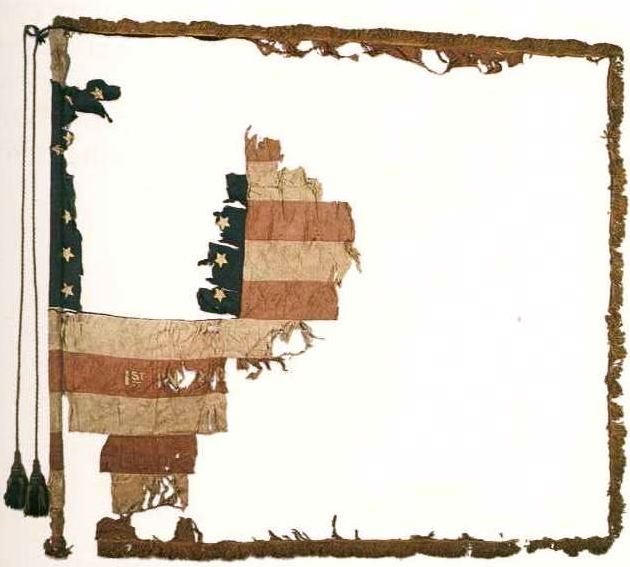 Our unit just replaced our replica flag that began to fray and fall apart from the multiple reenactments it served in over many years.  We raised funding over a period of years to purchase a new one from an artisan in New England.  The new flag is very authentic, made of silk and hand painted just like the originals.  The high end crafted replicas cost over $1,200 and the one we purchased took a lot of fund raising by our 30th PA family.  We added a polished tree limb for a staff to add character to our regimental colors.  We recently used it in several local Memorial Day parades we marched in including Rothsville, Lititz, and Maytown. 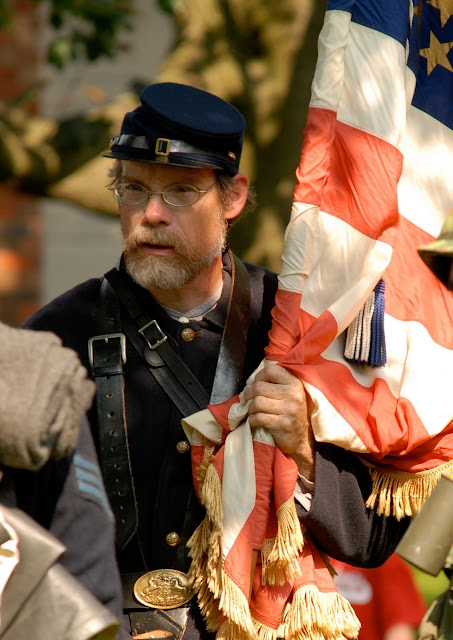 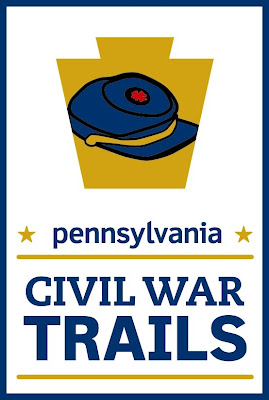