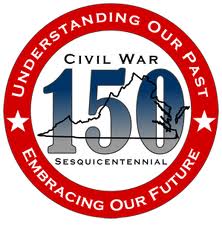 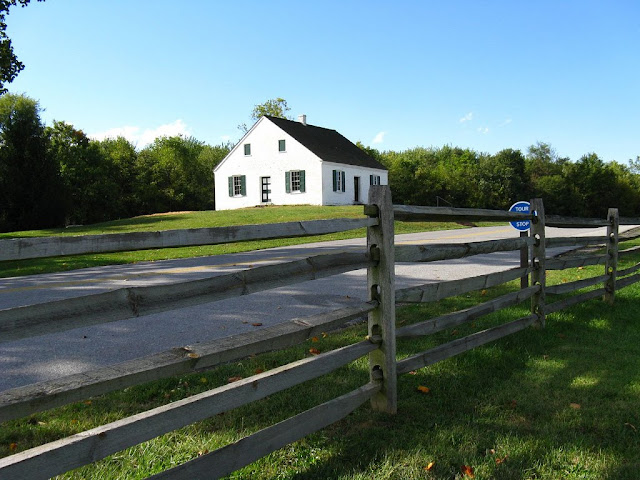 Preserved Dunker Church
-----------------------------------------------
Previously, I was fortunate to be chosen to attend a year long conference group that focused on a teaching technique called Shared Inquiry, which involved using primary sources when teaching lessons associated with the Civil War.   The program was sponsored by a grant from the State of Pennsylvania and involved some historical travel to look at events from the perspective of the physical space of where they actually took place.  Along with a group of selected educators, our group visited the Antietam Battlefield in Maryland, where we would see how the battle evolved from touring the battlefield park.  First we met with a park ranger, who ironically lived right next to the Gettysburg Battlefield Park but commuted and hour and fifteen minutes five days a week, to work at the Antietam Battlefield Park.   He gave us an introduction inside an original farmhouse that existed during the battle, which had recently been converted into an education facility for group tours.  Antietam became a political turning point in the war and was the largest loss of life in a single day, during the entire conflict.  It's story time.... 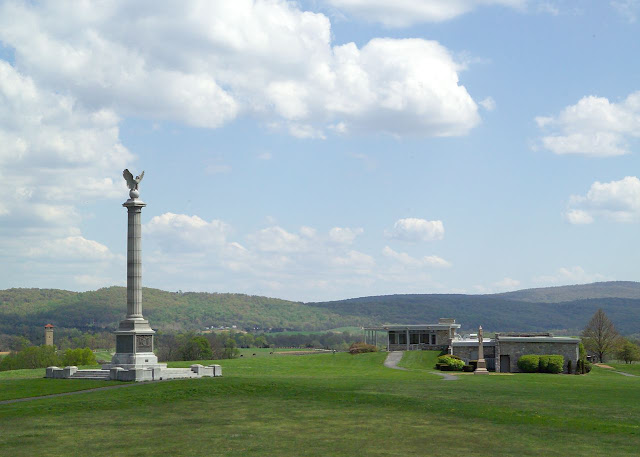 Antietam Visitor's Center
------------------------------------
In September of 1862, General Robert E. Lee and 70,000 Confederate troops of the Army of Northern Virginia crossed the Potomac River out of Virginia and into Maryland, where he hoped to eventually take the war into the north.  Lee's army was confident with high spirits, following a decisive victory at the Battle of Second Manassas in Virginia the previous month.  He hoped by crossing into the border state of Maryland, he could secure needed supplies and new recruits for his army, before invading Pennsylvania.  In the mean time, he sent Stonewall Jackson to attack Union controlled Harper's Ferry, Virginia and James Longstreet to occupy nearby Hagerstown, Maryland, which split his army.  He crossed through the gap of South Mountain and aligned his 40,000 remaining men along the Antietam Creek near Sharpsburg,  Maryland. He knew McClellan was following and a confrontation with the enemy was imminent. 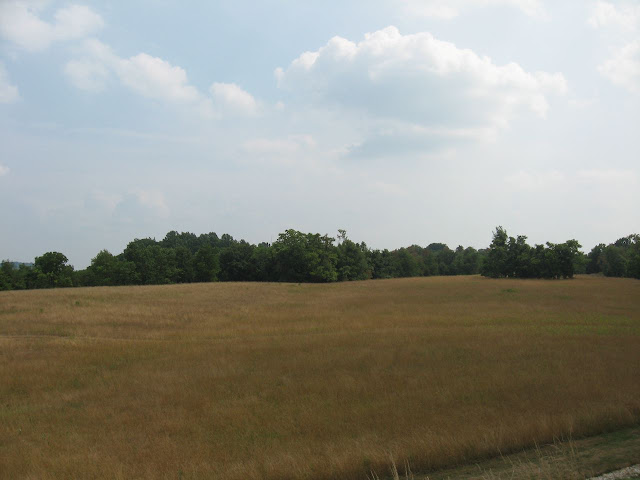 Violent Setting Now Quiet
---------------------------------------
General George B. McClellan was in pursuit and had gathered vital intelligence in Frederick, Maryland of a written order detailing Lee's future plans of an invasion of northern soil.   The Confederate blunder also revealed that General Lee had split his army and was now vulnerable at half strength.  Despite this information, the top commander of the Army of the Potomac shadowed the Confederate Army's movements cautiously, perhaps fearing the intelligence gathered was false and attempting to lure McClellan into a trap.  For some unknown reason, McClellan became convinced the Lee actually had 120,000 or more men and was hesitant to attack with speed.   This gave Lee critical time to bring up reinforcements and send word recalling Jackson and Longstreet to Sharpsburg.  The armies first clashed in the brief battle of South Mountain with the Union prevailing but the delay, caused by the fighting, provided Lee precious time to regroup his forces.  McClellan's opportunity to crush Lee and abruptly end the war was lost. 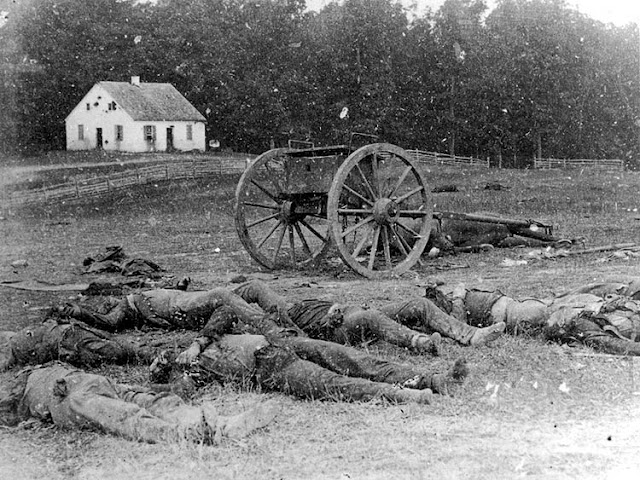 Confederate Dead / Dunker Church
(Photo Credit / National Archives)
-----------------------------------------------------
On the morning of September 17, 1862 with a huge force of 90,000 strong, the Army of the Potomac engaged the awaiting enemy.   General "Fighting Joe" Hooker began the Union attack by confronting Stonewall Jackson's men in the cornfield near Antietam Creek.  Hooker's men attacked with intense firepower, including canister shot fired from cannons that turned the artillery field guns into giant shot guns.  Each canister that was fired scattered 40 "golf ball" sized lead balls across the cornfield that cut the six foot tall corn stalks down as efficiently as a reaper.  The Union slowly advanced across the 30 acre field and by the time they had finished their assault, the corn crop was covered by dead and wounded men from both sides.  It was said that there were so many causalities on the ground that a person could walk from one end of the field to the other and never touch the soil. The Bloody Lane
-------------------------------------
The fighting then moved through the west woods near the Dunker Church where the Confederate line made advances.  The fighting was confusing with generals and their troops misplaced throughout the multiple fronts of the expanding battlefield.  Confederate troops now held the knoll where the Visitor's Center exists today and was defended by the center of Lee's line, which positioned themselves within a sunken farm lane that provided a natural trench to fight off advancing Union troops.  During the intense fighting, the sunken lane was assaulted again and again and slowly filled with Confederate dead.  After the battle the ominous scene became known as the Bloody Lane and is one of the most recognizable and notorious locations at Antietam. 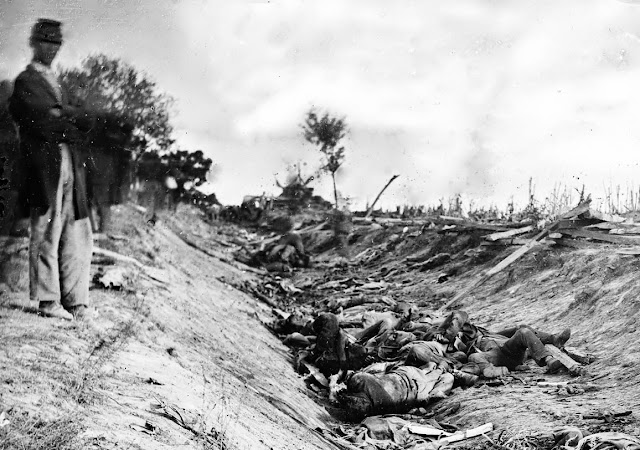 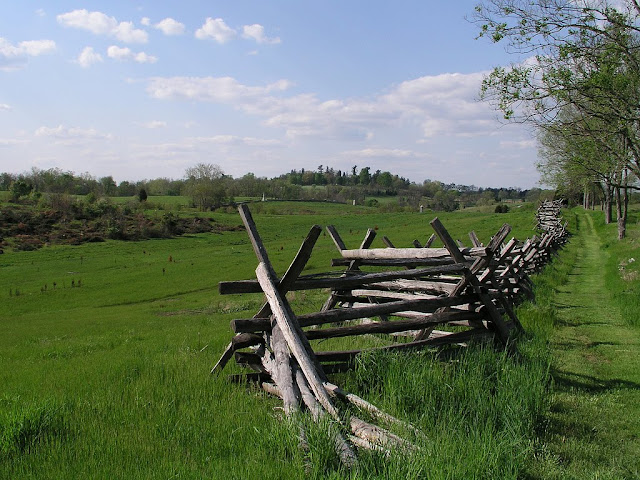 Antietam Fence Row
----------------------------------------
As the sun rose the next day one final opportunity presented itself for the Union.  For some reason, Lee had not retreated during the night and had held his line hoping to resume the fight the next day.  General McClellan had reserve troops ready to come up to reinforce the Union lines and could have overrun the outnumbered troops of the Army of Northern Virginia but chose not to take action.  The overly cautious McClellan wanted to wait until still more reserves could travel to the area to reinforce him.   Lee was not going to wait another day to be even more outnumbered by the Union.  Instead, he guided his men south, under the cover of night back across the Potomac River into the safety of Virginia.  Despite several lost opportunities to destroy Lee's army, the Union claimed a great strategic victory at Antietam. 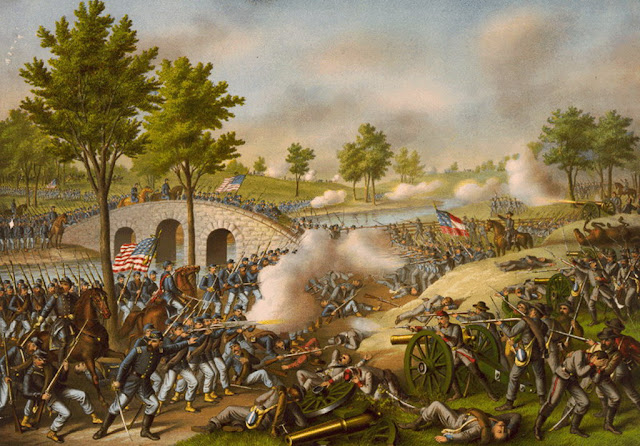 Battle of Antietam
(Painting Credit / Kurz and Allison)
---------------------------------------
The outcome of the Battle of Antietam did have a major impact on the course of the war to the benefit of President Lincoln and the Union.  With Lee's failed invasion of the north, Lincoln proceeded to issue the Emancipation Proclamation concerning slavery.  Although the announcement did not immediately have an impact on the lives of slaves, it changed the course of the war for both sides of the conflict.  The Union now had two reasons to fight the war, with preserving the Union being the first and freeing the slaves as a new second moral incentive.  The southern cause depended on bringing in a European ally to help fight the north but when the Emancipation Proclamation entered the political landscape of the war, both England and France withdrew their potential support.  The Union was also now free to recruit black soldiers and over 200,000 volunteered, putting the South at an even greater disadvantage as the war dragged on and men became the most precious resource.  Without doubt, the Battle of Antietam became the political turning point of the war. 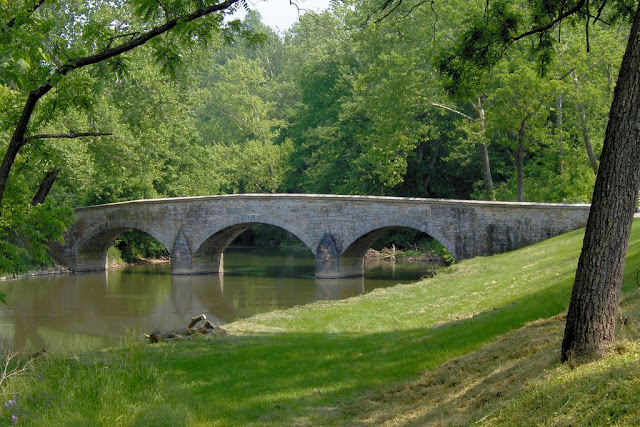 Burnside's Bridge
--------------------------------
Our tour group was given a creative explanation of the battle sequence as our park ranger presented his Battle in a Box lesson plan.  Inside the wooden box was several ropes and blocks of wood and colored name tags of key generals in blue and gray.  He mapped out a miniature representation of the boundary lines of the battlefield with a large piece of brown rope.  Ropes of another color represented the creeks of the area with blocks of wood designating the key bridges within the battlefield.  Volunteers were chosen to wear the name tags and were placed at their appropriate positions within the space.  He then went through the story moving people about to show how the lines of the opposing forces changed throughout the day's fighting.  It was a really great idea of one way to give students a visual representation of how a key battle played out step by step.  This strategy really helped the confusing battle make much more sense.  I definitely want to give this approach a try with my students.  It was a great trip and I learned a great deal. 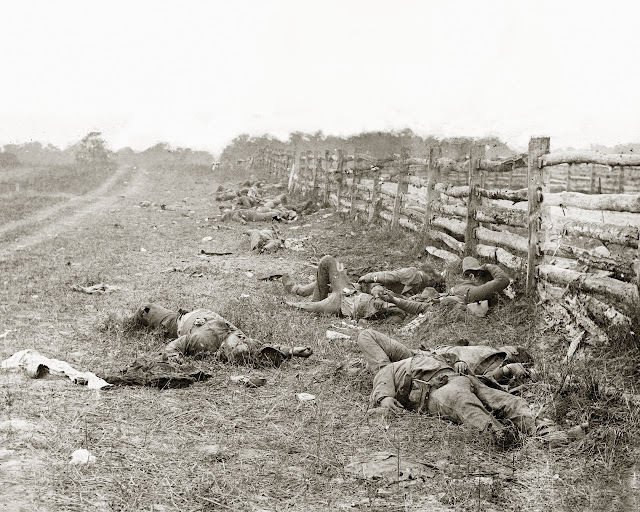 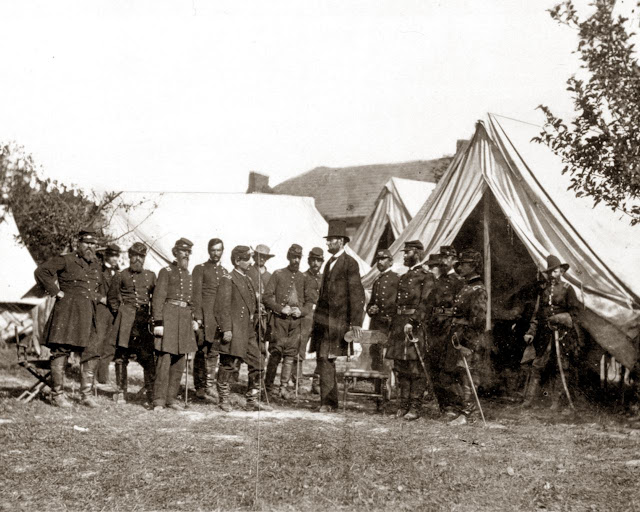 Lincoln at Antietam
(Photo Credit / National Archives)
---------------------------------------------
Did you Know...  President Abraham Lincoln traveled to Antietam two weeks after the battle and arrived on October 1, 1862.  His visit was unannounced and took General McClellan and the fifteen members of his staff by surprise.  Lincoln, who unlike most of his generals, was very aggressive concerning the enemy and wanted to know why McClellan had not continued to pursue the Confederate Army.  Soon, McClellan would fall out of favor with the president and was subsequently, relieved of his command.  Ironically, the two men would later run against one another during the Presidential Election of 1864, with Lincoln prevailing.  McClellan later went on to become Governor of New Jersey. 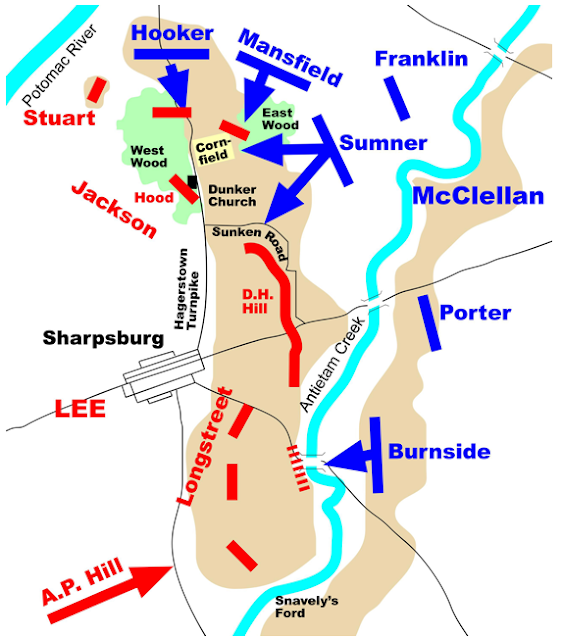