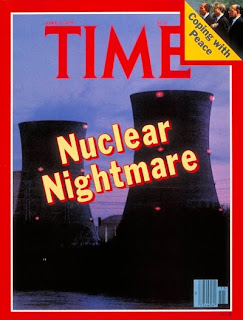 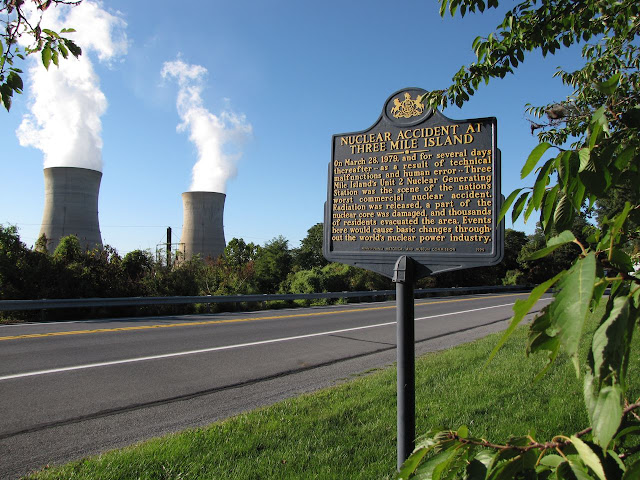 Nuclear Accident Historical Marker
--------------------------------------------------------
Time to look back in time to a traumatic event from my childhood that threatened Pennsylvania and impacted the region to the present day .  In 1979, Metropolitan Edison's Unit # 2 reactor at Three Mile Island nuclear power plant overheated and spread panic throughout the nation.  I was a student at Warwick Middle School and remember the fear that the event instilled in the people of Lancaster County.  For years prior to the event, scientist critics and left over hippies from the 60's were warning the world of the dangers of nuclear energy.  They preached the common "Dooms Day" scenario that suddenly became a real possibility and played out vividly in people's minds. 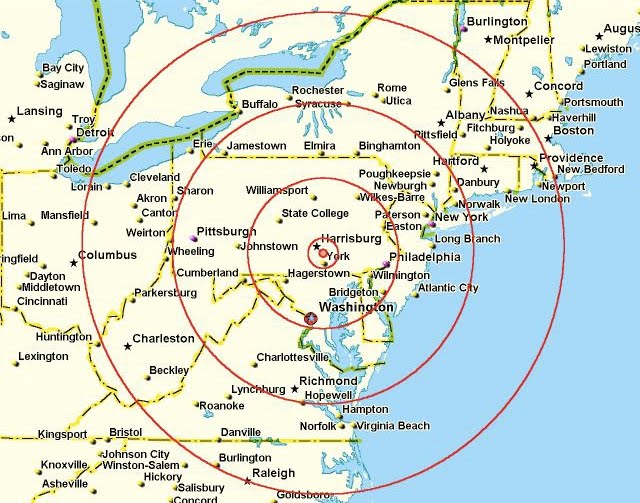 Potential Fall Out Zone
----------------------------------------
Events began to play out in the early morning hours of March 28, 1979 in Unit # 2 when a combination of mechanical and human errors combined to create a partial meltdown of the reactor's core.  Over a period of five long days, confusion over what actually happened and how dangerous released gases and radiation might be to the public led to fear and uncertainty.  At first, Pennsylvania Governor Dick Thornburgh stated that officials at Metropolitan Edison ensured him there was little threat to the public.  However, conflicting statements were issued by other state government leaders which generated more uncertainty, especially for local residents. 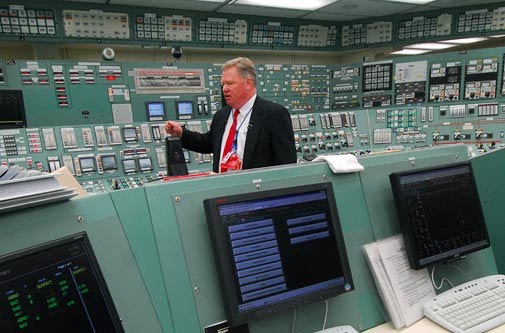 Unit # 2 Control Room
(Photo Credit / The Patriot News)
--------------------------------------
Members of the press were trying to sort through facts and rumors but when on CBS news anchor Walter Cronkite, the most trusted man in America, said a green cloud had been seen in the air over the complex, real fear took hold of the nation.  Within a few days, Governor Thornburgh issued a voluntary evacuation for pregnant women and young children living within a five mile radius of the power plant.  Schools were closed and people were advised to stay indoors.  Within days, over 140,000 people left the area to seek a safe haven elsewhere.  I still remember my mother packing essential items in boxes and loading them in the trunk of our car in case we needed to make a quick exit and evacuate. It was a very unsettling feeling not knowing what might happen next. 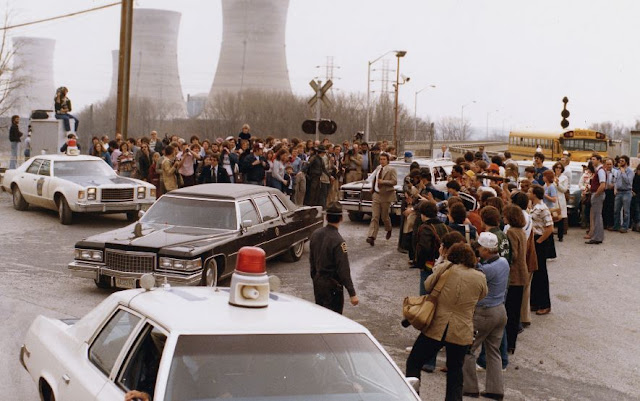 President Carter's Motorcade
(Photo Credit / The Patriot News)
----------------------------------------------
The crisis began in the middle of the week and by Friday I went to school and discovered I was in the minority.  Most of my classes were now more than half empty as many of my classmates evacuated or were staying indoors for their own safety.  Maybe my parents sold me out as a guinea pig for a state government research team but I didn't turn green or wake up with rabbit ears, at least not yet.  Eventually people breathed a sigh of relief when President Jimmy Carter visited the site in person to send a message to the public that things were under control and all was well.  If the President of the United States wasn't afraid, well... time to put a lid on panic and get back to some degree of normalcy.  Reactor # 2 was shut down and was slowly dismantled as a long term investigation took place.  Three Mile Island was the worst nuclear accident in the history of the United States.  The extensive investigation led to new safety regulations for power plants around the world. 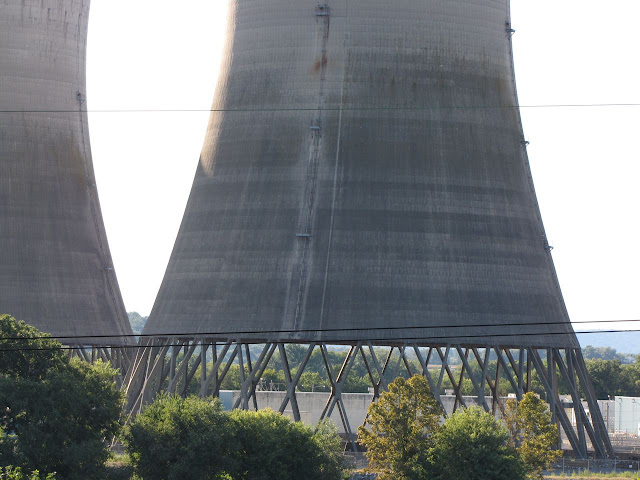 Unit # 2 Cooling Tower Skeleton
----------------------------------------------------
The real problem was the fact that nothing like this had ever taken place before and no one really knew where to begin to figure out exactly what happened.  Later, when I was in high school, our science class went on a field trip to Three Mile Island to tour the shut down reactor complex.  We arrived at a visitor / education center and then boarded a bus and crossed through the gates and over the bridge to the island.  Before we went inside the complex, we were each given a hard hat and small Geiger counter to wear that would sound an alarm if we were exposed to any radiation.  The interior of the reactor building was incredibly vast and I could not imagine how anyone could ever design and build something so large and complex.  As we walked through the plant, pipes twisted every which way in a complex labyrinth without pattern.  We walked over metal grated floors where we could look down several stories and a huge wheel continuously rotated so it would not warp under its own immense weight.  We entered ground zero for the disaster, the control room where fingers were pointed and jobs were lost.  The entire green control panel was encased in a plastic shell so no one could touch anything. The interior of the control room looked exactly as it did on March 28, 1979.   Apparently the long term investigation was yet to be completed and they didn't want anyone tampering with the dials, knobs, or gizmos.  It was an amazing field trip! 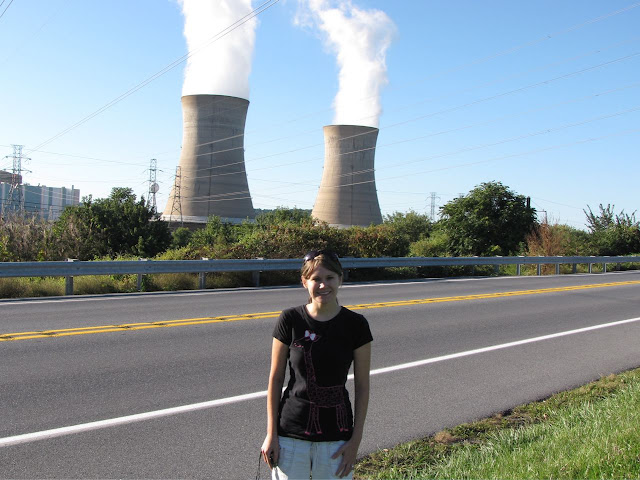 Mrs. Ruth Gallagher / Unit # 1
----------------------------------------------------
My friend and science teacher colleague Ruth Gallagher and I were on a road trip Geo Caching and since we were in the area, we decided to get a close up view of Three Mile Island.  On the way, I told her how brave I was during the scare and what a pillar of strength I was for my family, friends, and the entire community.  I could tell she was impressed!  Reactor # 1 continued in operation and we could see the steam rising into the clouds from a long distance away.  As we followed the GPS directions, the rising steam would disappear and then suddenly reappear again and again getting larger each time.  After traveling through a canopy of trees, we were in the presence of power.  A nuclear facility is a commanding and intimidating presence in any community.  I remember when I was in college and often drove past the nuclear power facility near Berwick, Pennsylvania at night. The enormous cooling towers suddenly appeared between small houses along the road.  It was surreal.  They glowed orange with industrial style lighting, an ominous sight to say the least.  It is easy to understand why people feared the worst in 1979.  It's the stuff made-for-tv movies live for! 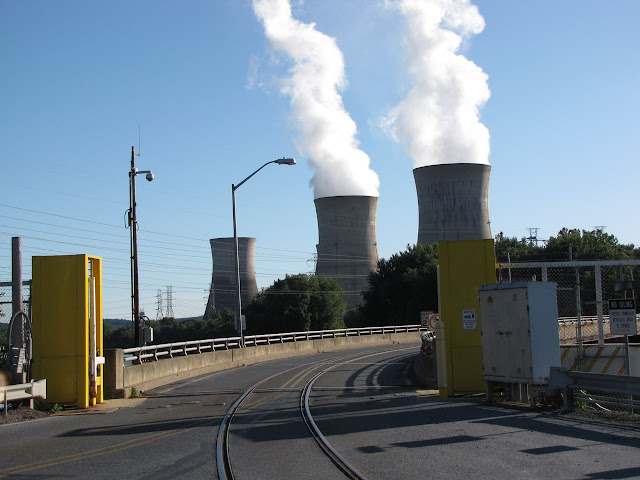 Three Mile Island Front Gate
-------------------------------------------
The impact of the event on the health of local residents continues to be debated to this day but the area seems to have the same rate of cancer as the rest of the nation.  The Incident of Three Mile Island put the world on alert but the complete meltdown of the nuclear power plant at Chernobyl, Russia in 1986 killed the image of nuclear power as an energy savior.  However, with the passing of time and the world's increasing insatiable appetite for power, nuclear power may have to be part of the solution. National Geographic stated in an article in their April issue of 2006, Nuclear Power... It's controversial. It's expensive. And it just might save the Earth.  The new controversy concerning nuclear power is what to do with the hazardous waste.  The Federal Government has created an isolated facility in Nevada, rightfully called the Yucca Mountain Nuclear Waste Repository. However, to date, no nuclear waste has been deposited in the underground site.  Although containers have been developed to move the waste from site to storage, critics claim the containers are not safe enough if catastrophe would strike a shipment on the move.  Is the benefit of creating emission free power worth the risk of the hazardous waste it also generates.  To date it is a zero sum game. 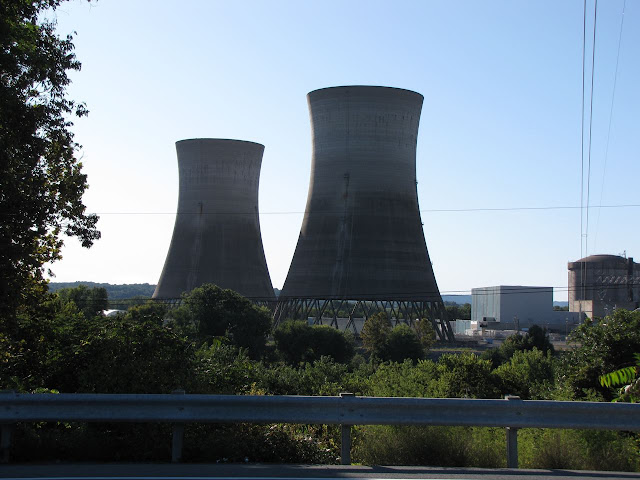 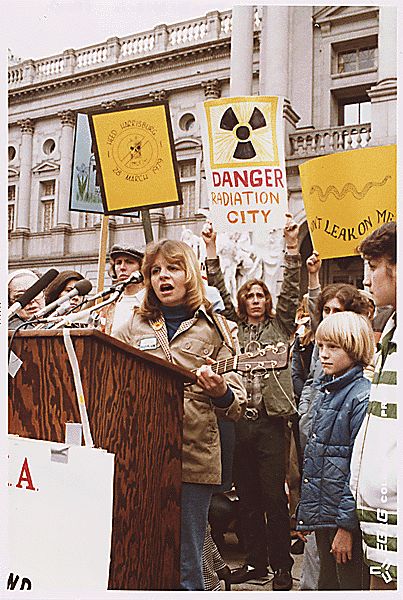