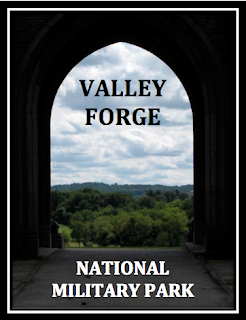 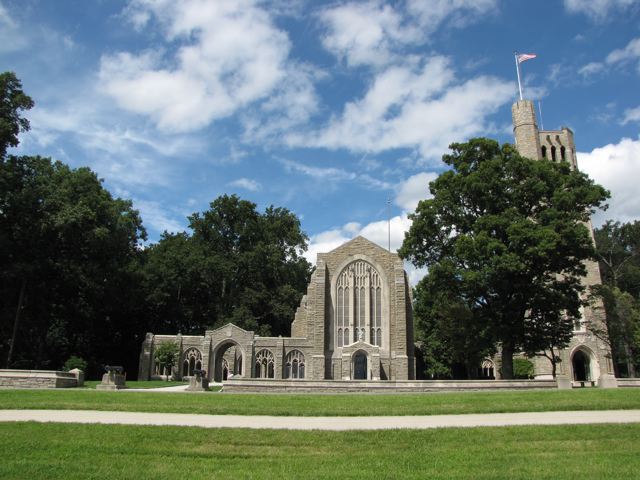 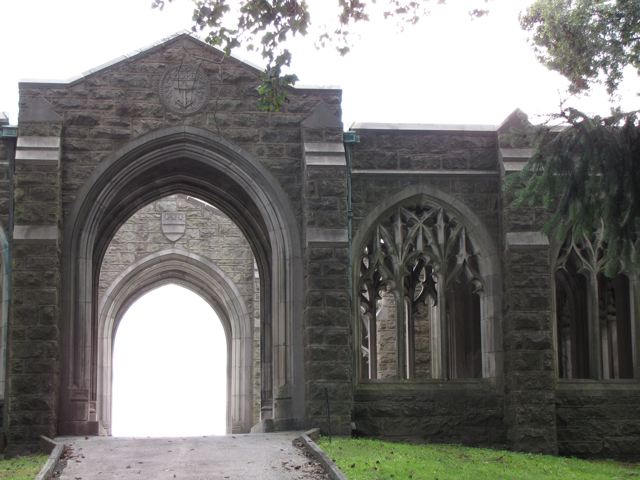 Cloister Courtyard Entrance
-----------------------------------------------------
Surprisingly, the chapel turned out to be a private active Episcopal parish that was not part of the Valley Forge National Park even though it was built within the park boundaries. Like most churches, the parish began as a small wooden structure in the woods.  After President Theodore Roosevelt paid a visit to the Valley Forge Park and made a short speech on the steps of the tiny church, an effort was made to begin building a larger stone structure.  The corner stone was placed on June 19, 1903, which was the 125th anniversary of the Continental Army's official exit from their winter quarters at Valley Forge.  Funding problems plagued the construction process as the sanctuary walls were built piecemeal as money trickled in over time.  The main chapel was finally completed fourteen years after it was started in 1917. 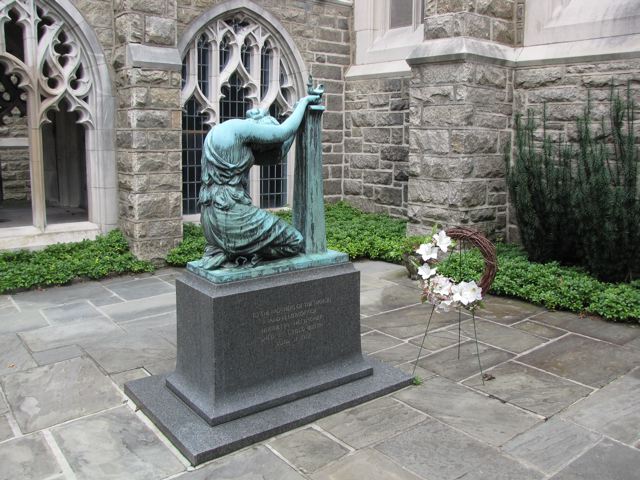 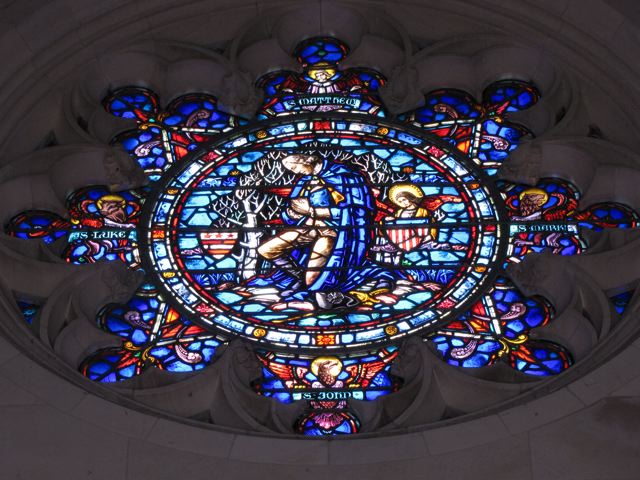 The large Patriot Tower was added to the chapel in 1953.  The one-hundred foot tall tower houses the Washington Chapel National Carillon which includes fifty-eight bells of varying size. Each bell was designed to represent one of the fifty states, the District of Columbia, and American territories abroad.  The size of each individual bell depicts the population size of the area it represents.  It always amazes me how much thought and symbolism is incorporated into many of the monuments I visit.  The tower inside contained several beautiful stained glass windows that came to life when the bright sun broke through the cloud filled sky.  The window shown above portrays General Washington in a humble bow of prayer resembling historic illustrations of the fabled scene at Valley Forge.  The tower itself was funded by a group I often come across in my travels, The Daughters of the American Revolution.  The DAR is a group I didn't know much about.  I was curious and did some research on this unique historic group. 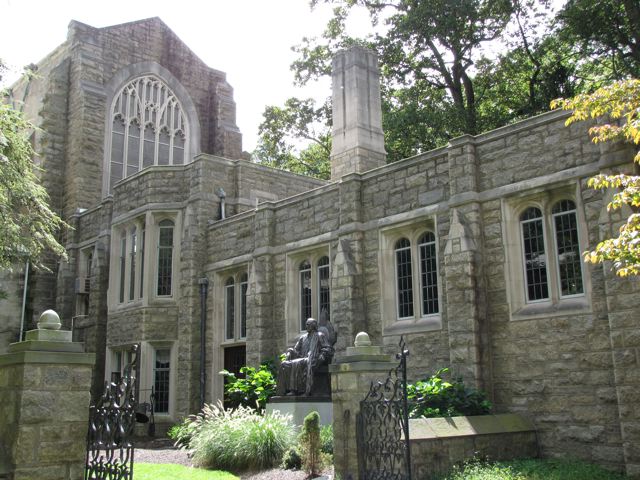 The DAR, founded in 1890 and headquartered in Washington, D.C., is a non-profit, non-political volunteer women's service organization dedicated to promoting patriotism, preserving American history, and securing America's future through better education for children.  DAR members volunteer more than 60,000 hours annually to veteran patients, award over $150,000 in scholarships and financial aid each year to students, and support schools for the underprivileged with annual donations exceeding one million dollars.  As one of the most inclusive genealogical societies in the country, DAR boasts 165,000 members in 3,000 chapters across the United States and internationally. Any woman 18 years or older-regardless of race, religion, or ethnic background-who can prove lineal descent from a patriot of the American Revolution, is eligible for membership.  Source http://www.dar.org 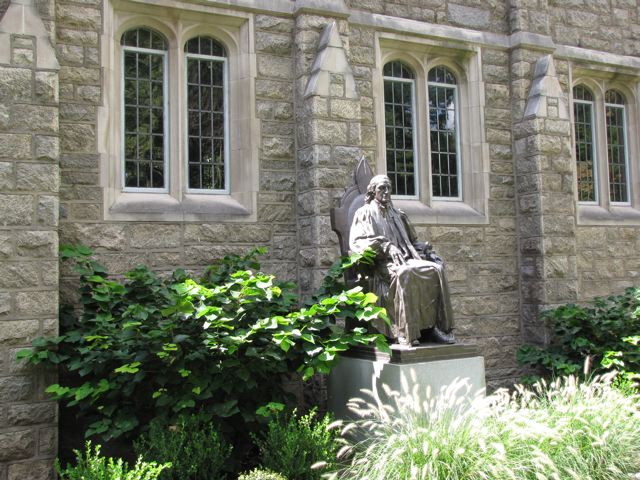 Seated Statue of George Washington
-----------------------------------------------------
Well, I guess I'm not eligible to join the DAR due to the gender issue.  I wonder why there isn't a Sons of the American Revolution (Historical Man Club)?  Oh well, back to our tour... Katelyn and I continued to make our way around the complex and came upon another courtyard that was a little hidden from view.  This space was enclosed by stone wall and an iron gate that was open.  As we ventured inside we were met by a statue of George Washington himself dressed in robes and seated upon a large chair.  The word throne quickly came to mind but I didn't say it out loud.  This courtyard led to a back entrance into the church and surprisingly a used bookstore.  Books were stacked up in several of the window wells near the end of this wing of the church and were reaching out to my curiosity.  However, our stomachs were now growling with lunchtime  hours overdue and it was time to go in search of provisions. 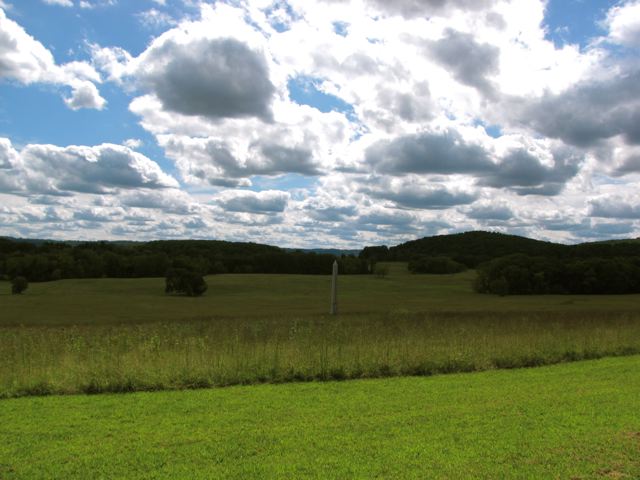 Rolling Hills of the Park
-----------------------------------------------------
There is always one more thing to see, one more corner left unexplored but that unavoidable reality always gives you an excuse to come back to see what you missed the first time.  Katelyn and I crawled back to the car and headed down the road toward the modern world.  Soon we had left 1777 behind us and within minutes were within the boundaries of the King of Prussia Mall.  One extreme to another!  We pulled into a TGI Fridays within view of Macy's Department Store and settled down to a tasty belated meal.  My wife would never have the will-power to be within site of one of the largest malls in the northeast without venturing inside and investing in the local economy.  Personally, I would rather go to the dentist than go inside the King of Prussia Mall. I decided to torture her by taking a picture of Macy's on my cell phone and sending her the image.  Katelyn and I finished our meal, turned our backs to the beckoning mall, and entered the Pennsylvania Turnpike and headed west toward Lancaster.  As we drove down the stretch of highway along the boundary of the Valley Forge park, oblivious white tailed deer grazed dangerously close to the roadway. 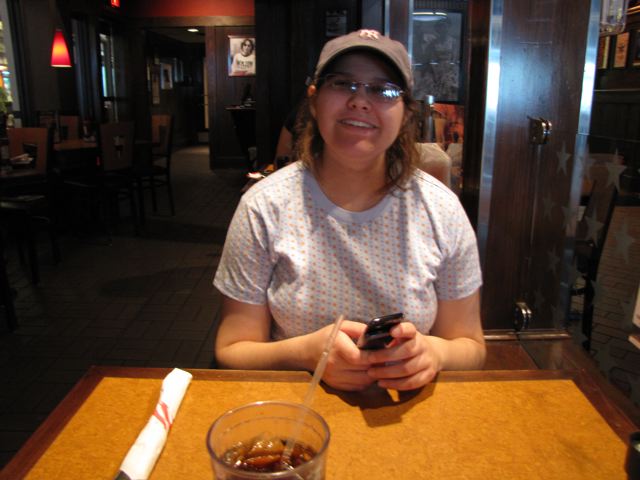 A special thank you to my daughter Katelyn who is my faithful travel companion and sidekick.  She joins me whenever possible as we travel around in search of history and points of interest.  She is a great sport and has conditioned herself to put up with me and my interests over the years.  We make a great team on the road and she makes our adventures more fun!  We are collecting site pins of all the places we have visited and we each have a banner to display them.  It is a fun way to visually log the places we have been.  I have my banner displayed in my classroom and Katelyn has her tribute to our travels in her bedroom.  Thanks Katelyn!