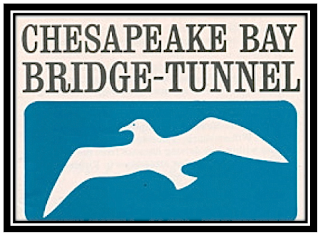 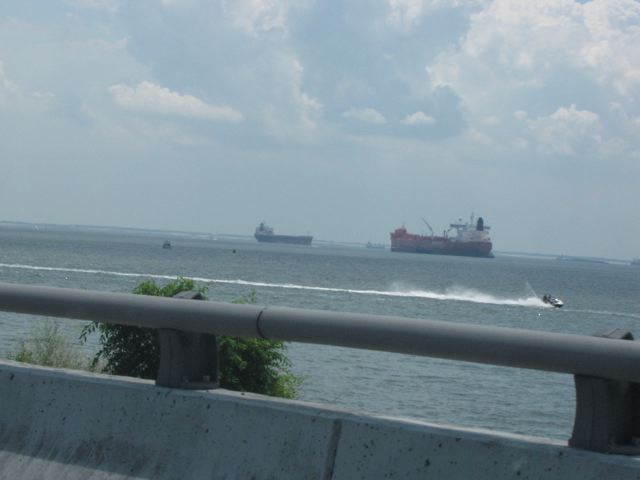 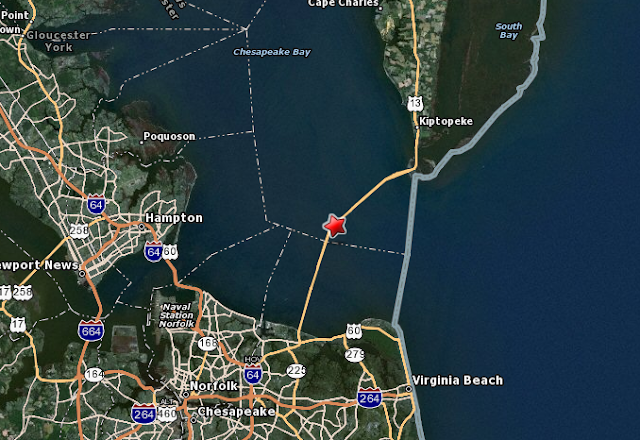 Map of the Tunnel-Bridge Route
-----------------------------------------------------
The twenty-three mile long bridge and tunnel project was dubbed one of the seven engineering marvels of the world by the American Society of Civil Engineers.  The facility connects the eastern and western shores of the state of Virginia.  There are four man made artificial islands where the bridge converts below ground into a tunnel format to allow open shipping lanes for large vessels to pass above the roadway.  Each of the four islands is five and a half acres in size. The bridge-tunnel span that crosses the mouth of the Chesapeake Bay was first opened as a two-lane expanse in 1964. The tunnel-bridge was built to replace a ferry system that included a large fleet of ships making ninety-one way trips per day.  Unreliable, due to weather conditions and other delays, the tunnel-bridge was built over a four-year period from 1960-64 at a cost of two hundred million dollars.  In 1995-99 the bridge section was expanded to four lanes at a cost of another two hundred million dollars to handle increased traffic loads and improve traffic flow. 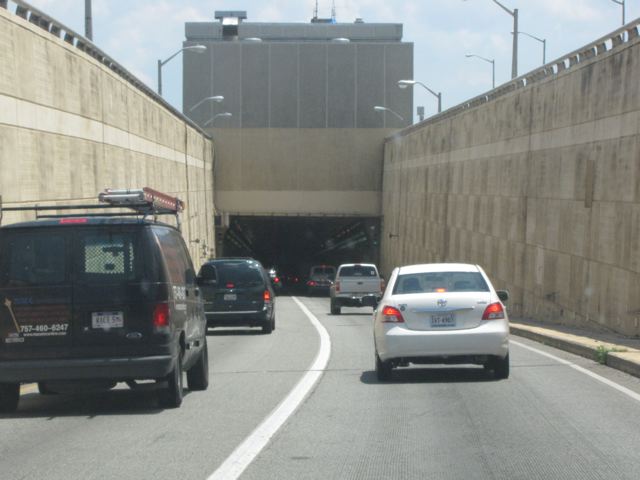 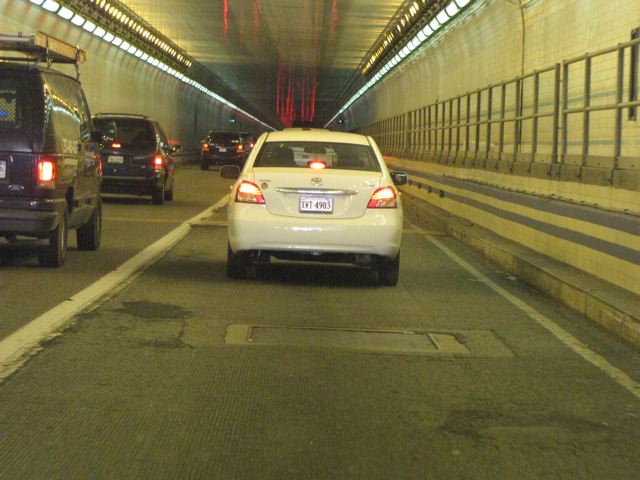 Under the Chesapeake Bay
-----------------------------------------------------
The tunnels are both about one mile in length and seem like any other tunnel I've ever traveled that cut through mountains.  You would never know that there was a huge body of water above your head, let alone a huge cargo ship. The tunnels are only two lanes but there has been a lot of discussion of expanding it to four lanes like the bridge.  However the cost to expand the two-mile long tunnels is close to one billion dollars.  So far they have decided to shelf the project because of the cost and the potential impact on toll increases.  It is already expensive, especially if you have to go back and forth.  Currently, if you cross back over within a twenty-four-hour window they lower the toll back across to five dollars.  What a deal! I was tempted by the savings but decided to stick to my one-way pre-planned course! 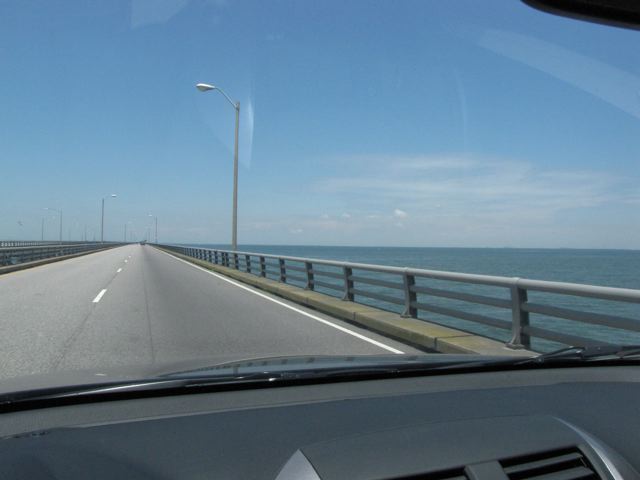 Riding Across the Bridge
-----------------------------------------------------
The view was amazing and it was a strange feeling to be riding across a bridge when you can't see land in any direction. Traffic was light so I could slow down to get a good view of the bay.  It was a clear day, giving the expansive body of water the perception of an endless vista. Ships could be seen in the distance from both sides making their way through the established shipping channel. I approached the second tunnel but first stopped at the rest stop on the small man-made island where the roadway disappears beneath the surface of the water.  When you pay the toll you get a voucher for a free small soft drink at the rest stop called Sea Gull Island and I'm never one to pass up anything free.  I pulled off to take a break from driving, cash in my freebie coupon, and absorb the surrounding views. 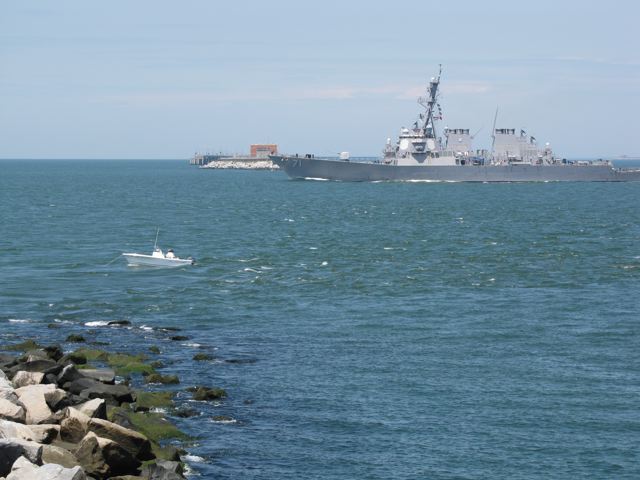 Battleship through the Gap
-----------------------------------------------------
Sea Gull island was really interesting, complete with a full service restaurant, a fishing pier where you can rent rods and tackle to fish the channel, a gift shop with official Chesapeake Bay Tunnel-Bridge souvenirs, and a historical display that chronicles the construction process and improvement projects of the tunnel-bridge.  However, the best part of the island's rest stop area was the view of the ships crossing over the submerged tunnel.  The Norfolk Naval Station is located on the west shore of Virginia and I was fortunate to see a large battleship pass through the tunnel gap on its way out to sea.  The island on the other side of the tunnel gap, where the traffic emerges back onto the bridge, is visible in the distance. 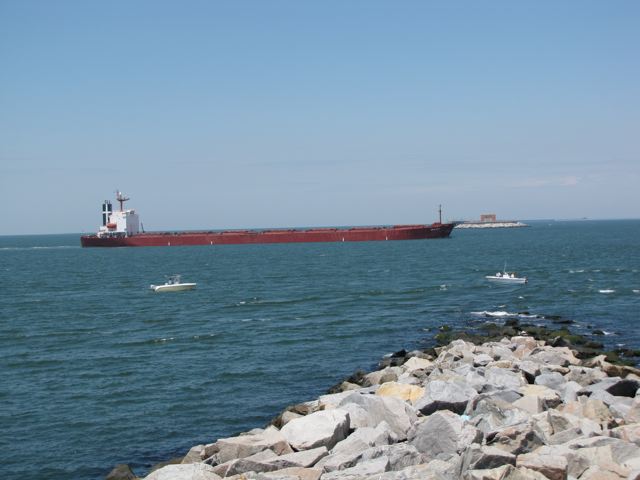 -----------------------------------------------------
I got my free soft drink and a travel pin in the gift shop, which I try to collect from every site I visit.  I was now down to my last two dollars in cash and went outside just in time to see an large oil tanker pass through the gap on its way to Norfolk or Newport News.  I don't think I have ever seen an oil tanker before and it was an impressive sight. There was also an observation deck of the tunnel entrance / exit where you could watch the traffic suddenly appear or disappear through the two-lane tunnel.  Sea Gull Island was the best part of the Chesapeake Bay Tunnel-Bridge experience.  The free fountain soda wasn't even watered down or overloaded with ice... always a plus for a freebie! 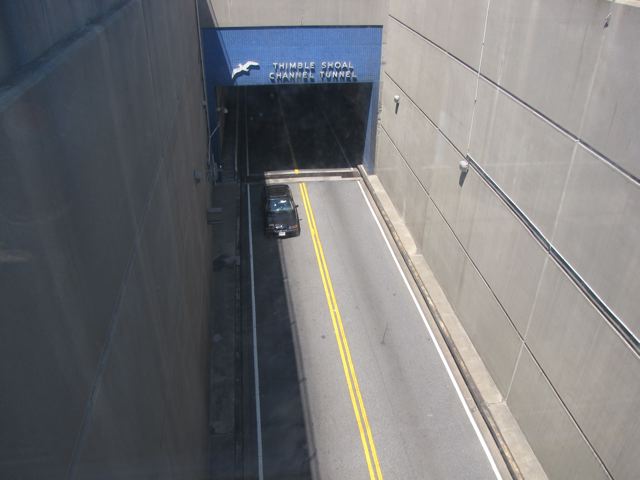 View of the Tunnel Access from Above
-----------------------------------------------------------
The tunnel-bridge actually has its own police force for the twenty-three mile expanse to monitor motorists, weather conditions, and to offer a quick response to accidents.  Sometimes weather conditions close the facility, especially when wind speeds exceed forty mph.  There have been incidents where vehicles have been blown over from sudden wind gusts.  It also closes during tropical storms, hurricanes, and icy weather. The police department also offers a unique service at no additional charge.  If a driver has a phobia of bridges or tunnels they can request for an officer to drive the person across the facility in their vehicle..  This free service is offered to diminish the number of accidents caused by phobia stress or panic attacks.  If I would have known this ahead of time, I might have faked a phobia so I could have had a break and be able to take some good pictures without fear of crashing or drowning. 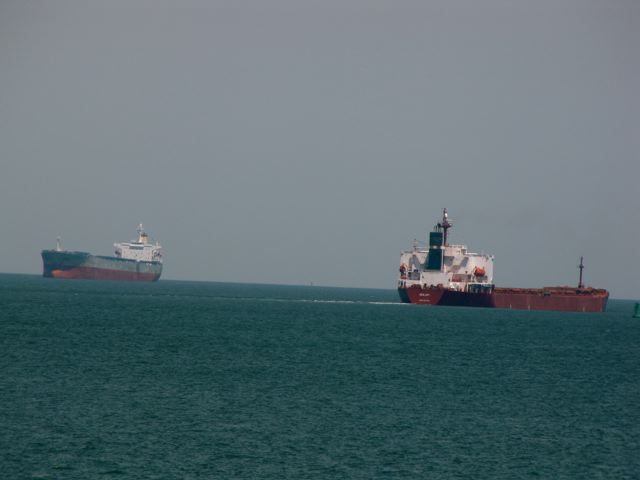 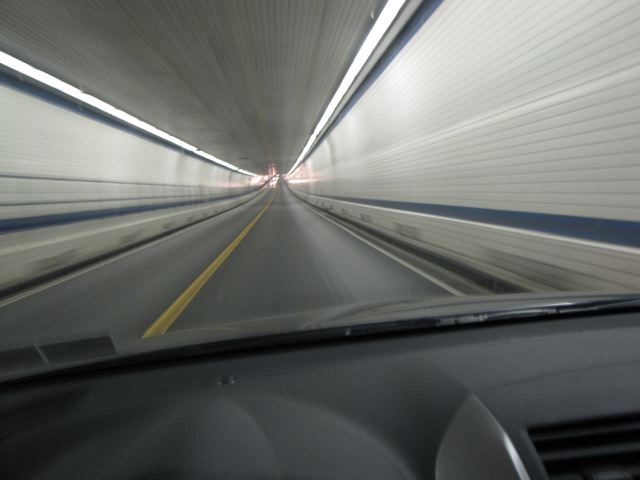 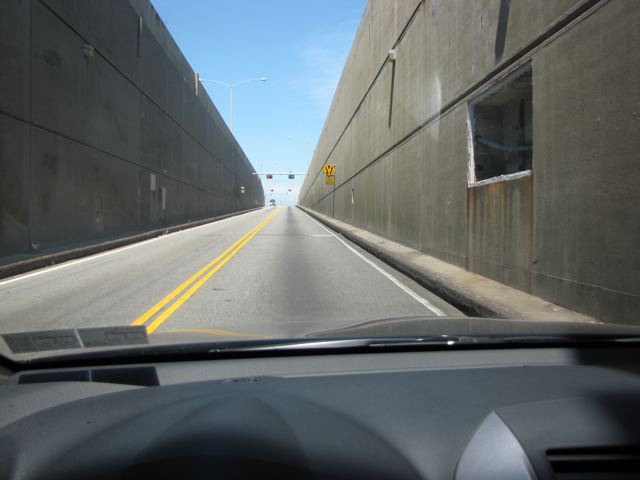 Emerging to the Surface
-----------------------------------------------------
It did feel good to come back up to the surface.  Hollywood special effects in movies have enabled us to be able to visualize every possible disaster come to life.  I was looking for drops of leaking water or cracks suddenly appearing within the tunnel walls, which was pointless since there was nothing you could do but die if really did happen. I was now nearing the end of the bridge where it climbed to a height of seventy-five feet to allow smaller boats and ships to pass through the channel beneath. The eastern shore was now within view and I could see land again. 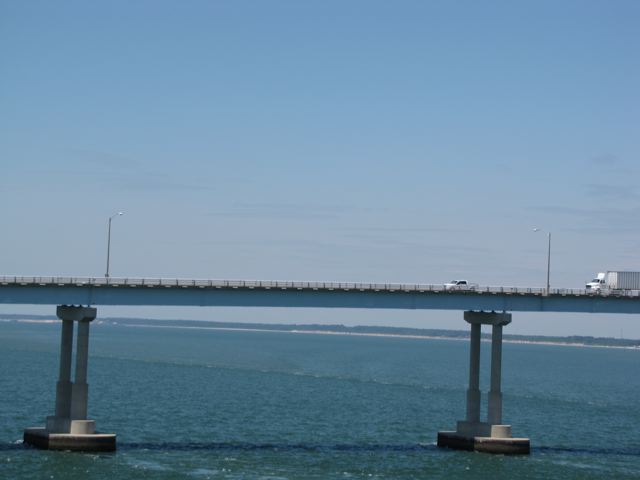 View of Elevated East Bound Lane
-----------------------------------------------------
I traveled route 13 up the eastern shore which was in stank contrast to the busy multi-lane highways of the west.  The area was mostly rural and small town, a slower pace all-together.  I traveled up through Virginia, Maryland, and eventually Delaware.  At this point, I began to see signs for a toll road and became concerned since I only had two dollars in my wallet.  I was hoping it didn't apply to me but I soon found out I was wrong.  I was approaching the Dover Air Force Base and thought I might wind up at a visitor's center where I could tap an ATM for some cash for the tolls.  Instead the exit brought me right to the base gate where I was greeted by armed military personnel.  I turned around before they could question me and took another road toward Dover.  Now in Lancaster County you pass a bank with an ATM every hundred yards or so but that is apparently not the case in Delaware.  I was running out of options as I continued to drive toward the city. 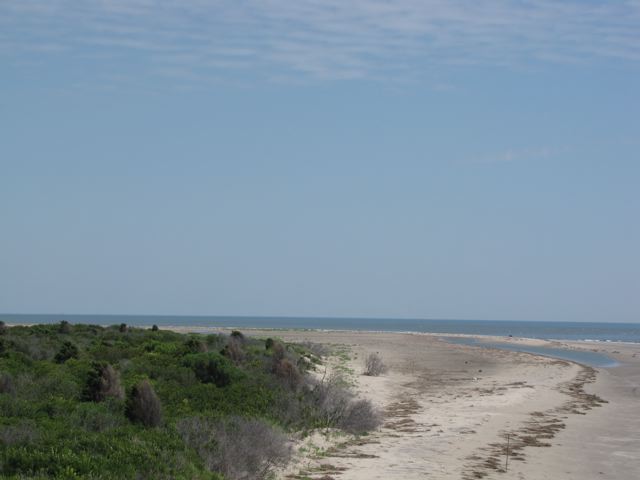 Despite getting side tracked and lengthening my trip home from Virginia by four to five hours, it was a fun adventure and something to see that I will never forget.  Maybe my next trip to Virginia will involve traveling down the easternshore so I can cross the bridge again to the west shore.  I will be sure to have plenty of toll cash on hand just in case!