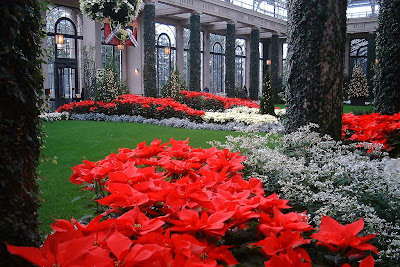 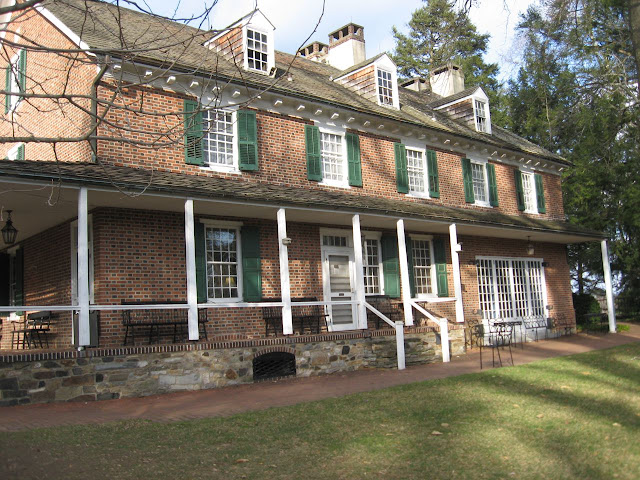 Dupont Mansion
--------------------------------------------------
It was a cold weekend and since my Philadelphia Eagles had a bye and weren't playing this particular Sunday, I decided to treat my family to some special togetherness fun! My wife Susan and I had discussed a return visit to one of the stops my parents often took me as a kid during the holidays, back in the day. The kids were thrilled (a little) and despite a 50 mph wind advisory forecasted for the entire day, I thought it would be a fun adventure. Tyler was a hard sell, but I bribed him with French fries on the road and well... I was going to drag him to the car kicking and screaming if need be. A little family road trip was just what we needed to get us in the holiday spirit! (Picture - The Dupont Mansion on the grounds of Longwood Gardens) 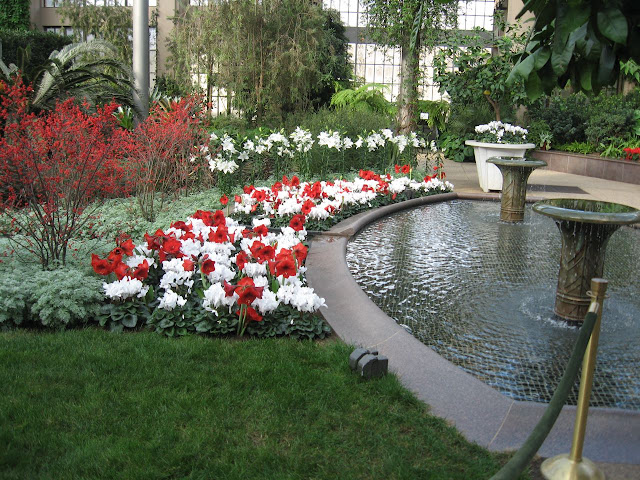 Fountains and Foliage
--------------------------------------------------
Of course we first have to have a little history lesson... The land that eventually became known the world over as Longwood Gardens was first owned by none other than William Penn. He sold it to another Quaker fellow named George Pierce who farmed the land. Later, two of his sons began to collect specimens of different kinds of trees and by 1850 they had created an arboretum with one of the largest collections of trees in the nation. The property went up for sale at the turn of the century when it was purchased by the famous DuPont family who wanted to protect the tree collection from becoming firewood. 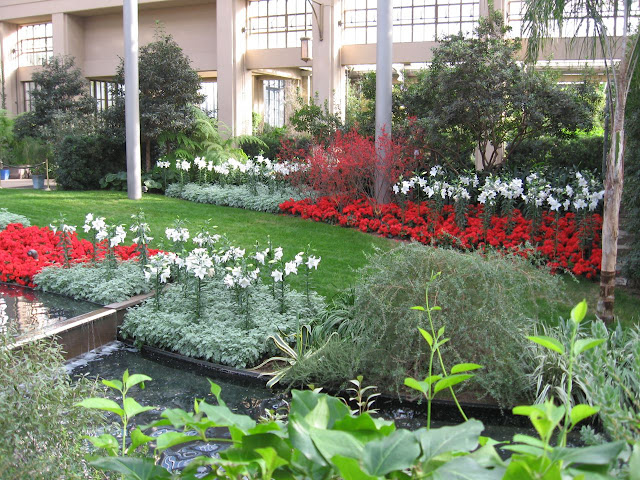 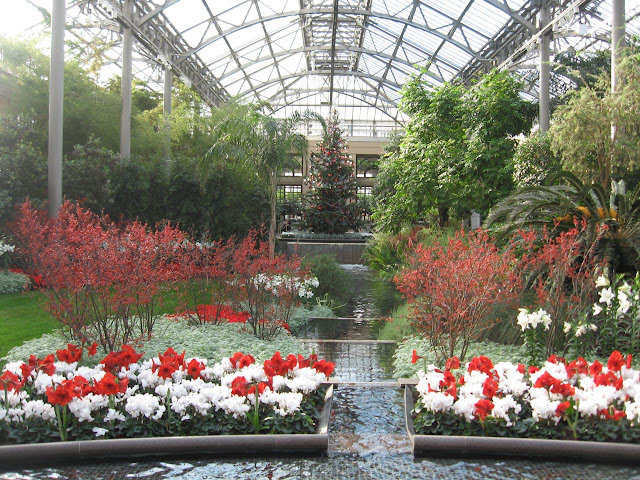 A River Runs Through It
--------------------------------------------------
I was hoping the wind advisory was going to cut down on the crowds and... I was right! Not too many cars in the parking lot, we pulled almost into pole position up front! The MIA tourists were all probably Ravens fans watching the game from the safety of their homes, leaving the gardens for us to explore with unobstructed views! The kids were a little frightened to get out of the car with smaller trees almost horizontal from the wind. I tried to lighten the mood by telling the kids Longwood's policy that any tree that fell on you was your to keep was clearly stated in their brochure! They didn't find this funny? We got out and stumbled to the front gate safely. 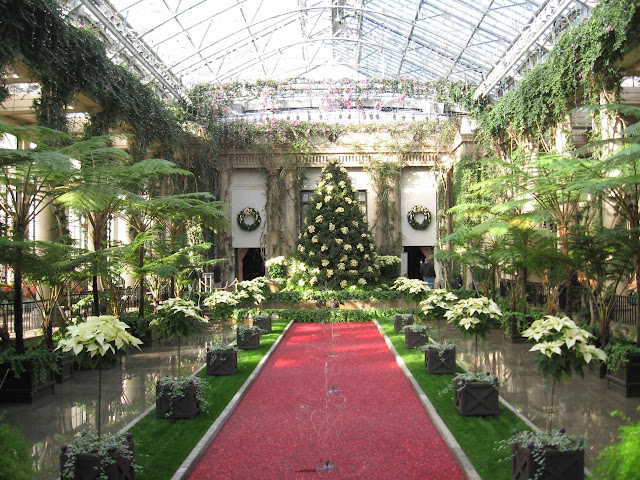 Stream of Christmas Cranberries
--------------------------------------------------
I was a little disappointed that there wasn't a reduction in fees during a weather advisory but it was for a good cause. We had our tickets and were ready to head to the Conservancy building a few hundred yards away. We bundled up like astronauts and made our way out into the great expanse full of nature's fury! It was not an easy task as wind roared around us as we trekked forward and experienced the true meaning of wind chill. We made it inside and it was worth the long cold walk. 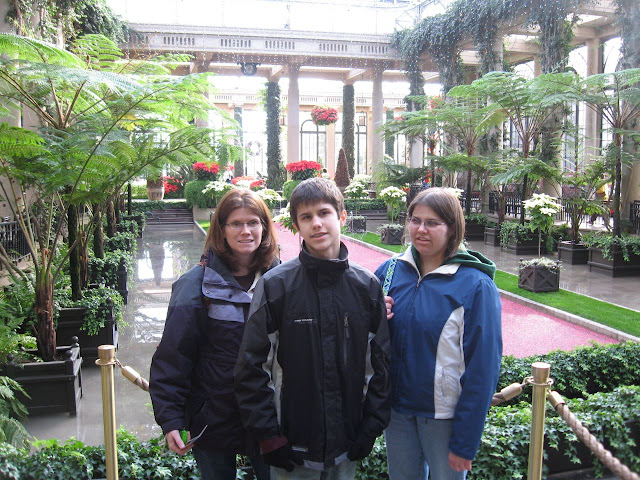 Getting the Christmas Spirit
--------------------------------------------------
The gardens were truly beautiful and breathtaking in their perfection. It was like a quiet, still oasis of green, protected from the harsh winter winds outside by glass walls that allowed the light's warmth to spill inside.Despite the fact that we couldn't explore outside, the inside displays were large and extensive with paths that twisted every which way to new discoveries around every corner. The blooming poinsettia plants, decorated trees, and interior and winding waterways including a river of real cranberries, couldn't help but get you in the mood for the holidays. The kids thought it was pretty cool too... until I said we needed to come back this summer to explore the outside gardens. 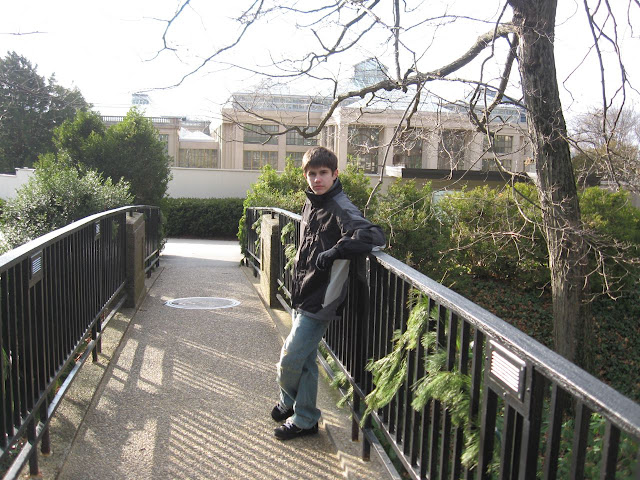 It was a Blustery Day
--------------------------------------------------
Now we had to make the dangerous hike back to the front gate and the wind was somehow blowing even more violently. I attempted to drown out the kid's complaints with the battle cry of French fries! French Fries! We made it to the car and headed to Applebee's Restaurant where it turned out they were OUT of French Fries. How is that possible? I was now getting the death stare from across the table! I was saved by the fact that the power began to cut out every five minutes or so from the howling winds. We got our food (without fries) and then headed for home. Overall, it was a good day with a family time memory in the bank. Plus, we didn't have to miss a good Eagles football game that was scheduled for next Sunday, which didn't have a wind advisory in the forecast for the record! Daddy's happy and that's all that matters. The End! 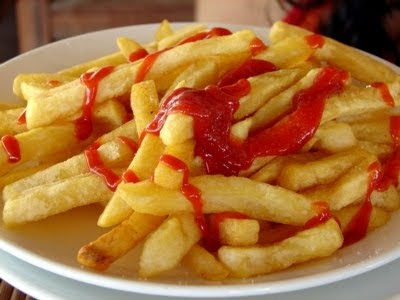