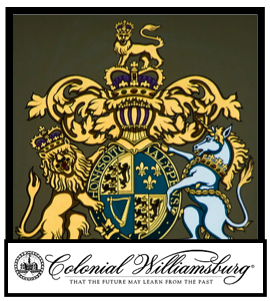 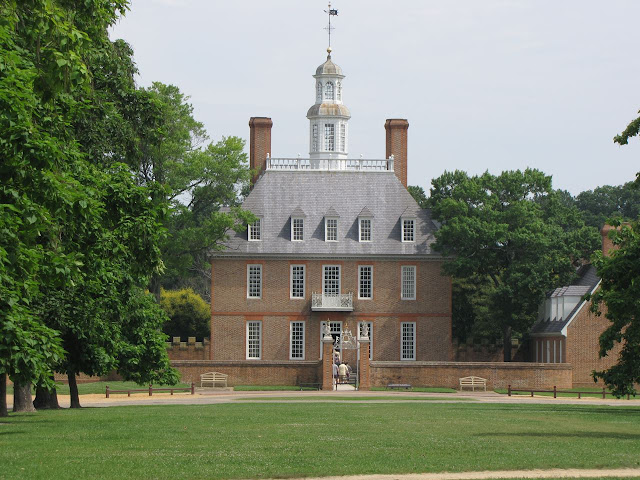 Welcome to wealth! The Governor's Palace was the symbol of the king's authority in Virginia and the estate was designed to give just that very impression to every visitor who entered the front gate. The grand mansion and sprawling grounds were modeled after the estates of the old aristocracy of England. As the grounds expanded to meet that expectation, the taxpayers of Virginia footed the bill. Governors were assigned by the king and were very much foreigners in the Land of Opportunity where funds were not typically squandered on frivolous facades and symbols of power. At least two governors would feel the heat for excessive spending on the estate, especially when an expensive canal was constructed for... well, who knows what? 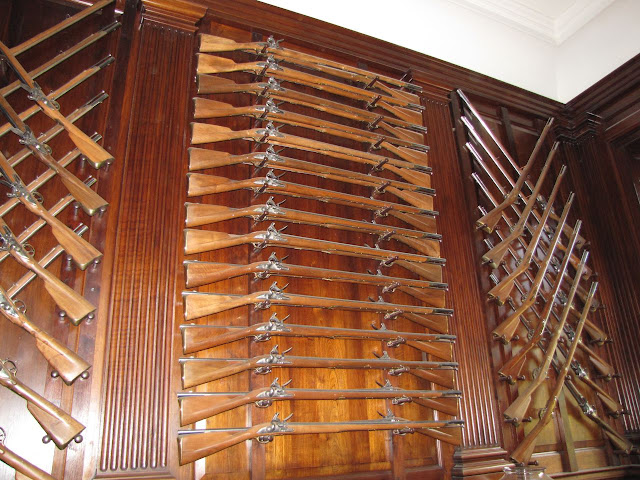 Display of Power
--------------------------------------------------
The impression one gets upon entering the main palace is the fact that you are not in charge! The entry parlor is an ornate display of colonial weaponry that was stored in the palace to supplement the military stores of the magazine about a quarter of a mile from the front door. The intent of the display was to symbolize the king's authority over his loyal subjects and it is a quite effective tactic. You can't help but feel intimidated by the powerful decor that surrounds you and even follows you up stairs to the second floor. Scores of muskets, and swords line the hallways as if you are being guarded by an invisible sentry with every step. I couldn't even think about the Declaration of Independence! 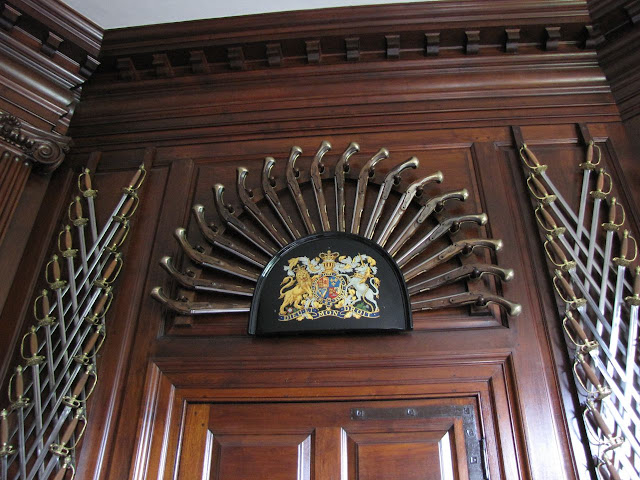 The King's Arms
--------------------------------------------------
The Governor's Palace and Capitol Building were both physical symbols of King George III and certainly commanded an intimidating presence in the capital city. One of the positive effects of moving Virginia's capital further west to the new location of Richmond during the American Revolution, was the fact that the physical symbols of the king's authority would be left behind in Willaimsburg. The colony and future state could get a fresh start, leaving their political ties to England in the shadows down river. Thomas Jefferson was the last governor to stay at the mansion during the war and was one of the strongest voices suggesting a relocation to Richmond. The new leadership of the American Nation did not want hand me down structures that would be constant reminders of the British Monarchy. The new governor's mansion was a lot more modest and was a much better fit with the American ideal of fiscal responsibility and public service. 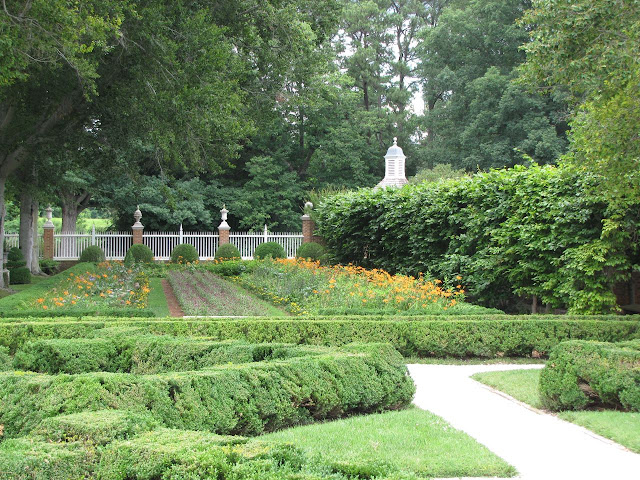 Twice the governor's mansion served as a hospital during the American Revolution and was very active following the Battle of Yorktown. One of the large square gardens behind the palace was set aside as a military cemetery for those patients who did not survive attempted treatment. The space contains the unmarked graves of 156 soldiers and 2 women who died within the converted palace hospital walls. Today the somber space is framed by a low continuous hedge and is filled by a simple lawn of bright green grass. (not pictured) It lies in stark contrast to the ornate colorful flower gardens nearby. A reminder that certain spaces are best left simple and plain so passersby can focus on the meaning of what the area truly represents. 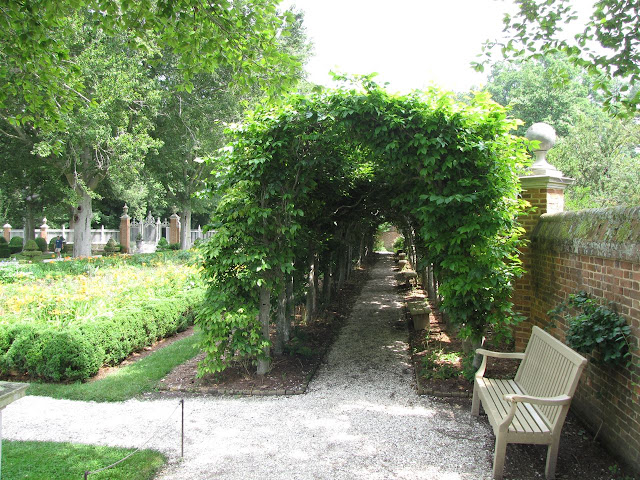 
+ Home to 7 governors, including Patrick Henry and Thomas Jefferson

+ Over 25 servants and slaves worked at the palace daily

+ The main palace had three floors, each with 3,380 square feet

+ 80 of the muskets on display are original British Brown Besses

+ The palace was destroyed by fire within three hours in 1781 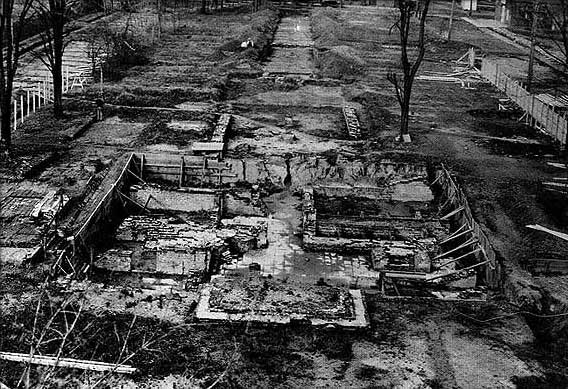 Death by Fire
--------------------------------------------------
When the capital was relocated to Richmond the palace fell into disrepair from neglect. On the evening of December 22, 1781 a fire broke out in the basement and quickly spread through the vacant palace. The entire structure was soon engulfed by flames and the intense heat caused the building to collapse within three hours. The remains of the Governor's Palace, shortly after the fire, are seen in the picture above. The newspapers suggest that the cause of the fire was arson but the crime was never solved. The remaining bricks were disassembled and sold as building materials and the remains of the once great structure were soon absent from view. The palace was later rebuilt on the original foundation and reopened to the public in 1934. 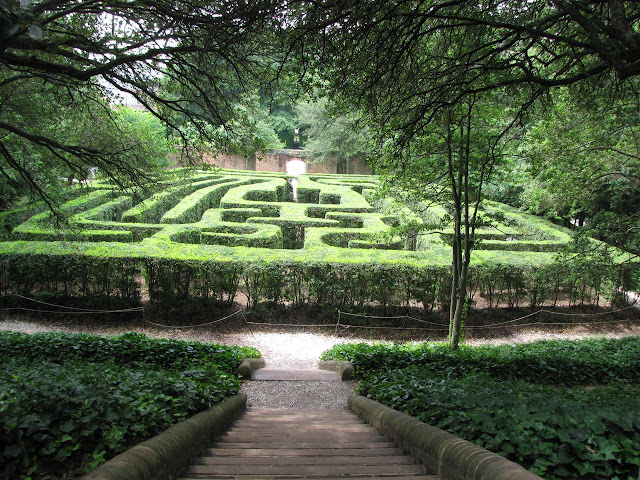 We had time to explore the town on our own for about two hours and I headed back to the palace to take in more of the grounds behind the mansion. There were pathways that twisted every which way inviting you to explore. At the far end, I stumbled onto a surprise maze of hedges. At the back end you could scale some steep steps to a small rise that served as a perch to view the maze pathways. (See picture above) Many of the garden pathways were white and from a distance, looked like small white stones. However, upon closer inspection, they turned out to be crushed clam shells, which were commonly used for this purpose throughout town. Another example of practical colonial recycling from the fisheries found along the coast. 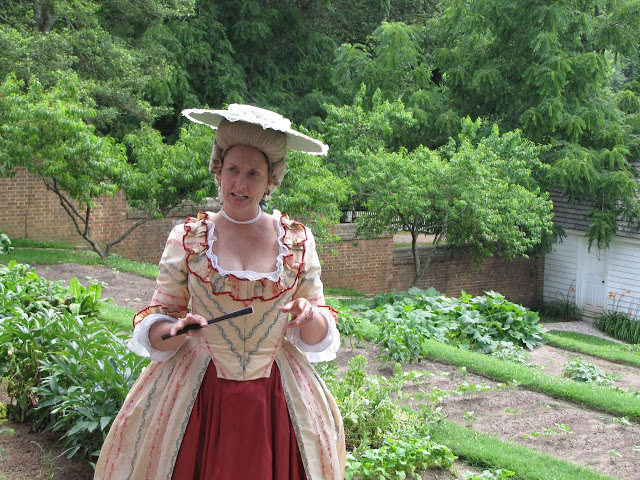 --------------------------------------------------
Lady Dunmore gave us a tour of the house and grounds. She was the wife of John Murray, the fourth Earl of Dunmore who served as governor of the colony until the outbreak of the revolution. Despite the growing political tensions with the crown, Dunmore was a popular governor and well liked by the people of Virginia. Lord Dunmore brought a family atmosphere to the palace with six children filling the rooms of the royal residence. A daughter was soon born in the palace and was named Virginia in honor of the colony. An action that certainly helped the family make a positive impression on their new American neighbors in Williamsburg. 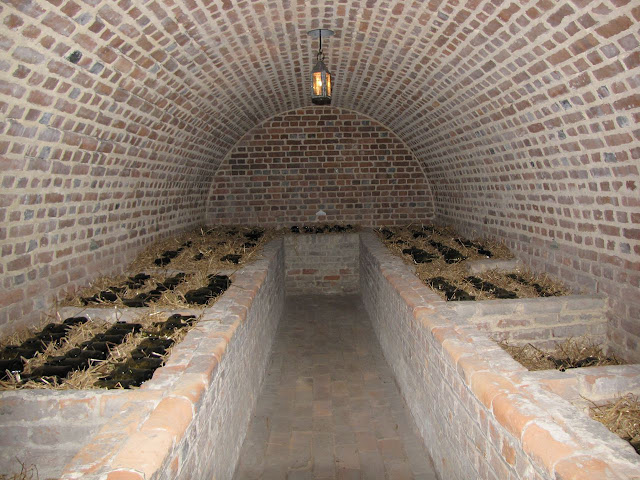 Wine Storage Cellar
--------------------------------------------------
The cellar of the palace was interesting to explore as one cavern after another stored wines and other supplies used by the governor while entertaining guests. There were 11 wine bins to store the imported port. It was not uncommon for the governor have over 50 guests for dinner several nights in a row. On one occasion, Governor Spottswood entertained over 200 people one evening at the palace. Might have been a lot easier and cheaper to just order out for pizza... if you had coupons!  This is what happens at my house when it is my night to cook! 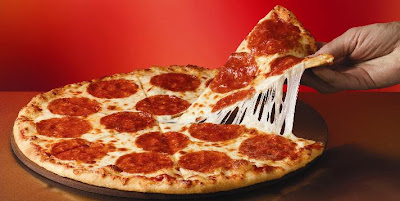