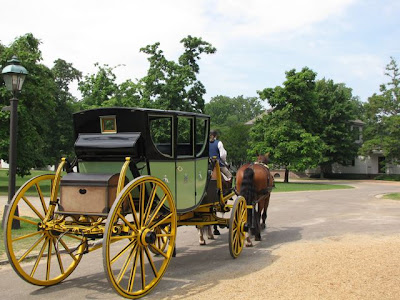 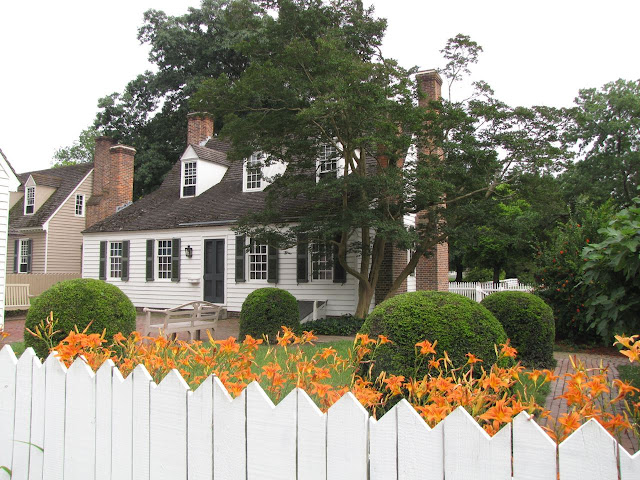 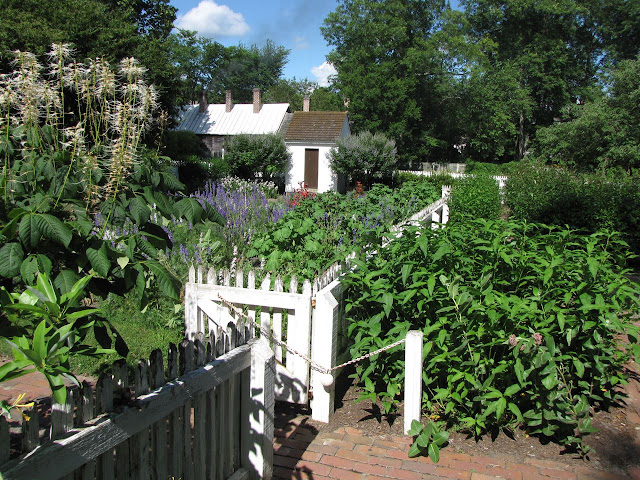 Rear Vegetable Garden
---------------------------------------------
Virginia's triangle of history includes Williamsburg, Jamestown, and Yorktown with the scheduled program designed to cover all three historic sites. We would be centered in Colonial Williamsburg with all of us staying on site in one of the colonial houses that had been converted into individual hotel facilities. I drove down to the Institute from Lancaster, Pennsylvania and was so proud of myself for finding the state of Virginia on my very first try!  I found my way semi-easily to the Visitor's Center but was unsure of where I was actually supposed to go or who to see.  The center's staff had no idea where I should go to check in and I was sent to several places before we figured it out.  I would later find out that I was the only participant who drove to the institute; everyone else flew in from across the country and were picked up at the airport by institute personnel. No problem, I soon found my way to where I was to check in and was later escorted to my colonial residence where I would stay the coming week. 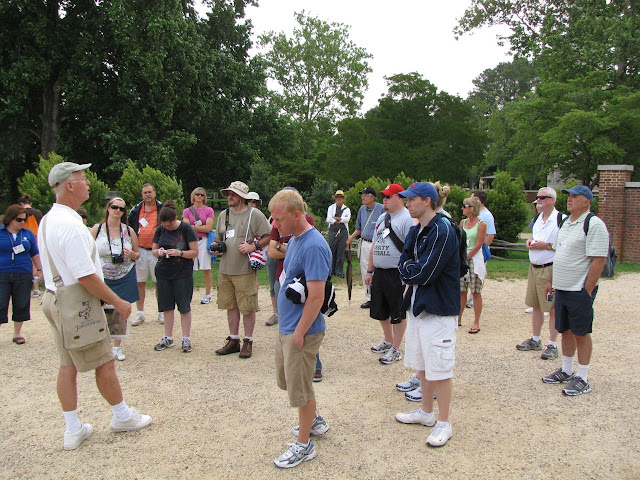 Our Teacher Institute Group
-------------------------------------------------
I realized something today that I had never really thought about before. I became suddenly aware of the fact that we are historically spoiled living east of the Appalachian Mountains. People from the west don't really have access to colonial history and sites from the American Revolution time period to visit. The program is sensitive to this and as a result, all but one of the other 24 participants in our group were from the west coast. Many teachers came in small groups from the same state, including Arizona, New Mexico, Nebraska, and Iowa. Others were from Kentucky and Missouri. My only fellow east coast neighbor was from the extreme western tip of South Carolina. It was interesting to spend the week getting to know people from all over the country. 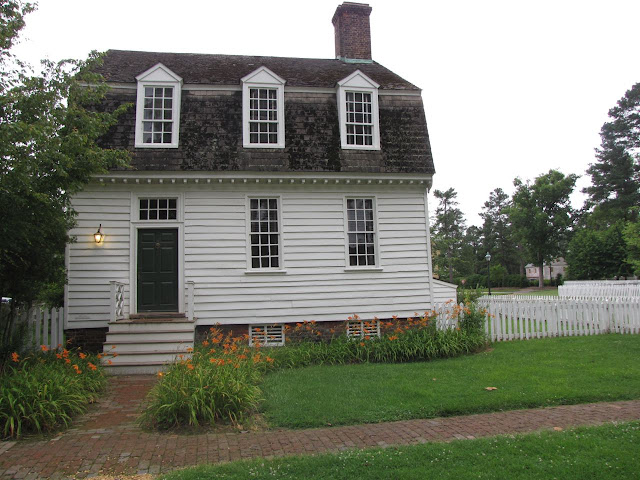 John Orrell House
---------------------------------------------
I was dropped off at my new temporary home by a friendly hotel valet and was able to park my car behind the house hidden from view. A lot of care and forethought goes into limiting the sights and sounds of the modern world. The first thing that surprised me was how big Williamsburg was compared to what I was expecting. I had imagined a single street of historic homes but it was a whole community that had hundreds of structures. Some of the buildings are completely authentic and have stood for well over 200 years. Many others are rebuilt on the original foundations, following the close supervision of historical architects. Some of the homes are open to the public for historical tours, others are privately owned or rented out to Williamsburg staff members, and the rest are used as small resident hotel houses like the one where I would be staying. Only 3 of the 26 colonial hotel houses are original buildings and mine (shown above) was one of them. 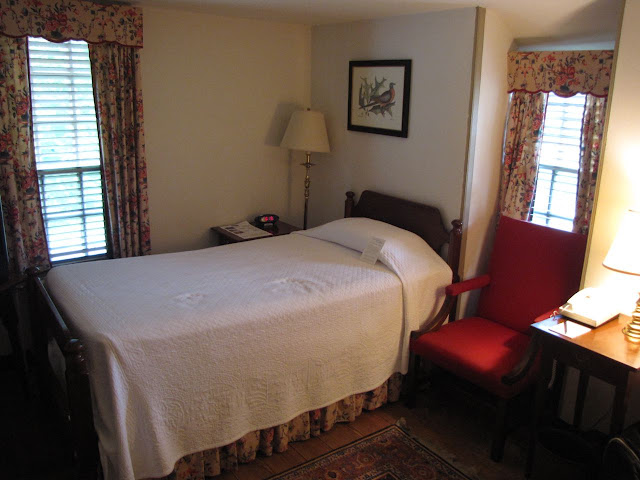 Colonial House Hotel Room
------------------------------------------------
Welcome home... The John Orrell House was built circa 1750 and was once the home of one of the tailors found in town. Williamsburg was well known for the local tailor craftsmen who made a nice living making fine clothing for the gentry class of Virginia. The simple house measured out to a perfect 28 feet square, a perfect cube in fact when you add the second floor. The house has three separate rooms as hotel facilities with a suite on the first floor and two small individual rooms upstairs. The interior of my room is shown above with another unseen twin bed off to the right. My roommate turned out to be a nice guy from Iowa and we joked that were given the upstairs servant's quarters because it was so cramped inside our room. Our neighbor and fellow institute participant downstairs had four full rooms and a queen size bed to herself! Thankfully, the fully restored house was air conditioned, and like many buildings in Williamsburg, the modern equipment was well hidden from view within each structure to keep the historical atmosphere intact. 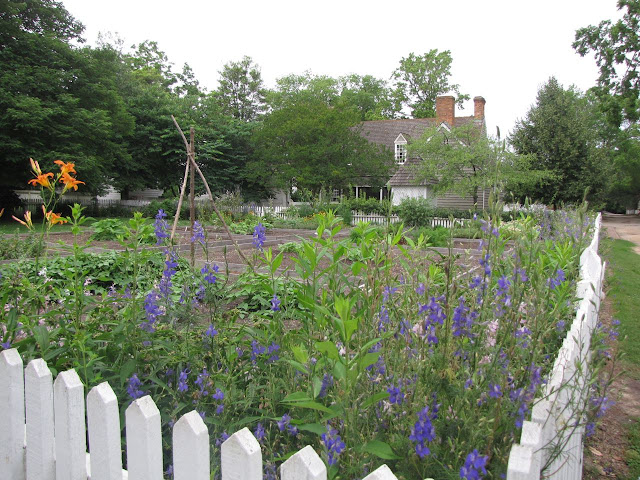 Rear Lot Garden Plots
---------------------------------------------
We unpacked and walked through the colonial streets to the Marketplace at the far end of town where we would meet the other members of our group and have dinner together. The Market Place is a small section of tasteful shops and nice restaurants between Colonial Williamsburg and the College of William and Mary. Immediately, I was taken by the beauty of the homes and gardens throughout our long walk to dinner. Everywhere was something of interest to catch your eye and I couldn't wait to explore the town in more detail in the days to come. 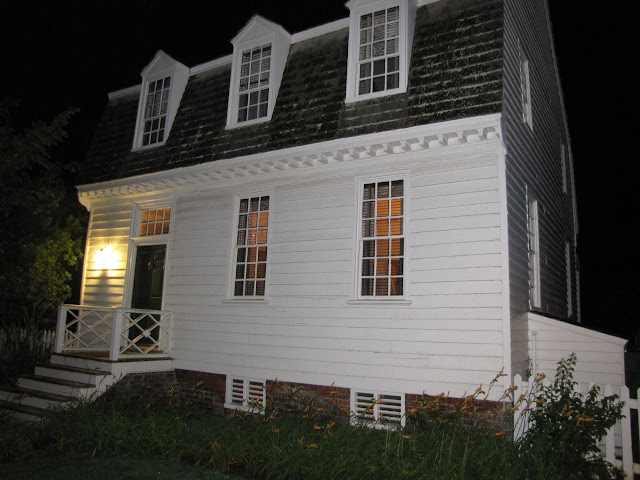 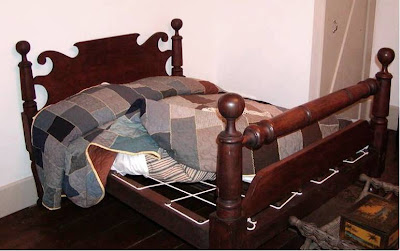 The phrase Sleep Tight is a colonial saying relating to the fact that beds were supported by a rope netting framework that sometimes needed tightening to improve support of the bedding to help give you a good nights rest.


The phrase Don't Let the Bedbugs Bite is a colonial saying relating to the fact that mattresses were often stuffed with straw and hay, which eventually became home to insects of all kinds that would bite you... letting you know it was time to change out the stuffing!