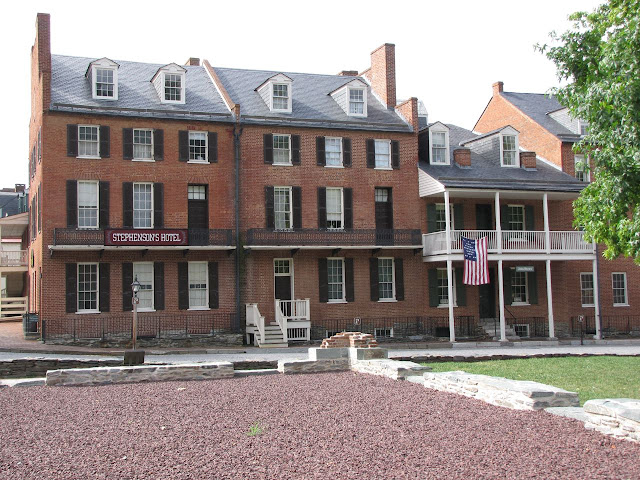 Original Town Structures
----------------------------------------------------
Harper's Ferry is one of the most unique historic places I have ever visited, a trip back to another place and time. You enter the sight from up above on the mountaintop, park your car, and then descend down to the town by one of the National Park's tour buses to experience history. Harper's Ferry is an active town where resident's cars enter through a private entrance. This policy cuts down on the car traffic within the town and allows pedestrian tourists to navigate more freely through the streets. The town is built onto a steep hillside that gives the illusion you are visiting a village somewhere in the European Alps. It is a fun place to spend the day and explore. 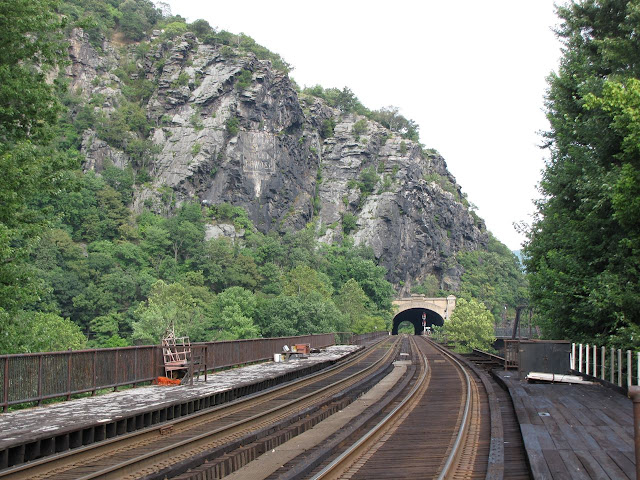 Rail-Line Mountain Tunnel
----------------------------------------------------
The location of Harper's Ferry is still a critical geographic passenger and freight rail interchange for the area, as five trains passed through during our two hour visit. It a unique destination with something for everyone including, hiking out to Jefferson's Rock for a great view of the valley below. On this particular day it was inching close to 90 degrees so I decided to stay in town and get some ice cream instead. I did get up there on my last visit and it is worth the horizontal walk, on a cool day. (See Photo Below) The famous rock and resulting view gets it's name from Thomas Jefferson, who stood on that rock on October 25, 1783 to admire the view. Finally, the town has a lot of unique shops, museums, and Mother Nature in abundance. 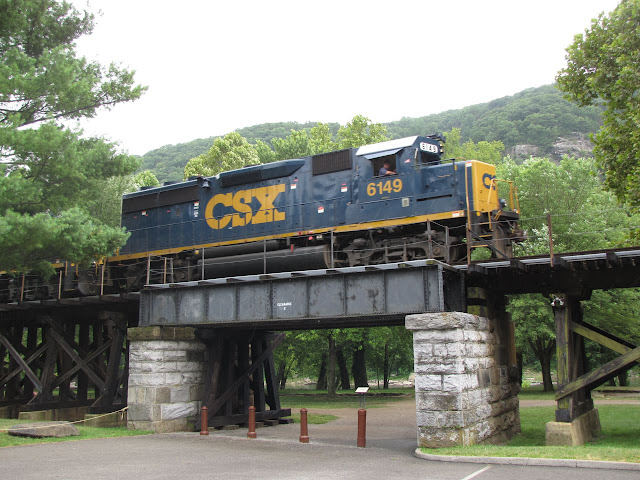 Coal Train Climbing
----------------------------------------------------
Now back to history and our story about the rebellious abolitionist, John Brown and his attempted raid on Harper's Ferry... John Brown was not new to action and violence for his beloved cause. He was on the run for killing five pro slavery settlers in Kansas and then leading eleven slaves from Missouri to freedom all the way in Canada. He and his sons rented a farm a short distance away, where his group continued to stockpile weapons and were joined by several more followers. Up to this point, John Brown had never been apprehended or even questioned by the authorities. He viewed his successful raid in Missouri as a trial run for Harper's Ferry and his confidence in himself and his abilities was never higher. 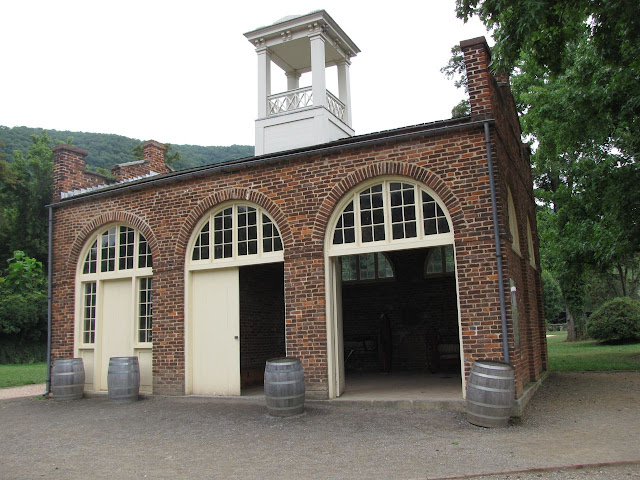 The Fire House Last Stand
----------------------------------------------------
On October 16, 1859 Brown and 19 of his 21 followers arrived in Harper's Ferry after cutting the telegraph lines into town. They quickly captured the armory, which was poorly guarded. They took hostages from the surrounding area including Lewis Washington, the great-grandnephew of George Washington. The raid was going according to plan but began to fall apart. Word spread to nearby plantations for slaves to run to their chance at freedom but few, if any did. A local baggage master named Hayward Shepherd ran out to warn an approaching train about the raid and was shot down by Brown's men. Ironically the first man killed in John Brown's raid to free the slaves was a free black man. The train continued on and the word was out that Harper's Ferry was under attack. 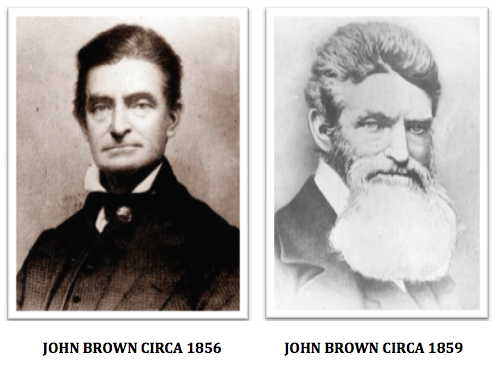 No slaves had shown up to carry Brown's vision through but the locals had enough of John Brown and all the problems he had caused. The local militia pinned down the rebels in the armory and captured the bridge to cut off any possible escape. Brown's men gathered the hostages and moved into the engine house at the front of the armory. The locals surrounded it and exchanged fire throughout the day. One of Brown's sons went out with a white flag seeking a ceasefire but was shot down and killed on the spot. The next morning a detachment of United States Marines arrived led by Robert E. Lee and J.E.B. Stuart who soon stormed the engine house killing and capturing the raiders. Within three minutes, all hostages were rescued, half the raiders were killed, and Brown was seriously wounded. All survivors stood trial for high treason against the State of Virginia despite the fact that they were apprehended by federal troops on federal property. 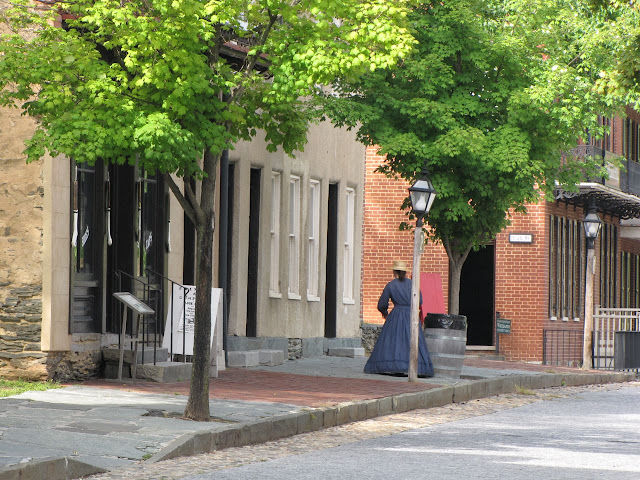 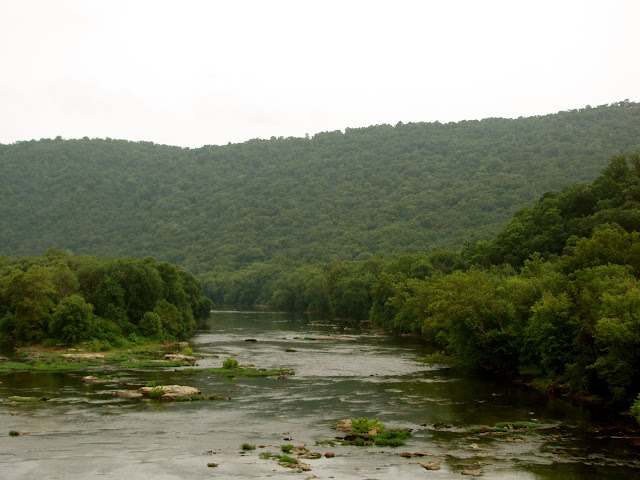 + Brown fathered 20 children but only 11 lived to adulthood, 2 more died in the raid

+ A total of 5 of Brown's 21 raiders at Harper's Ferry were free, former, or fugitive slaves 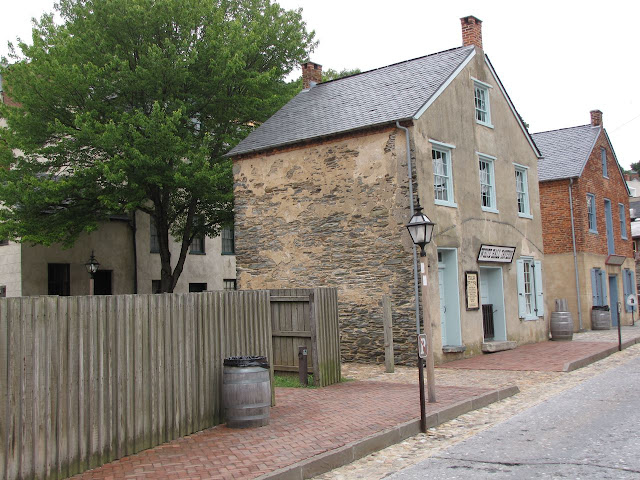