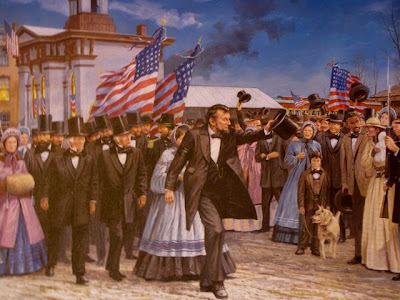 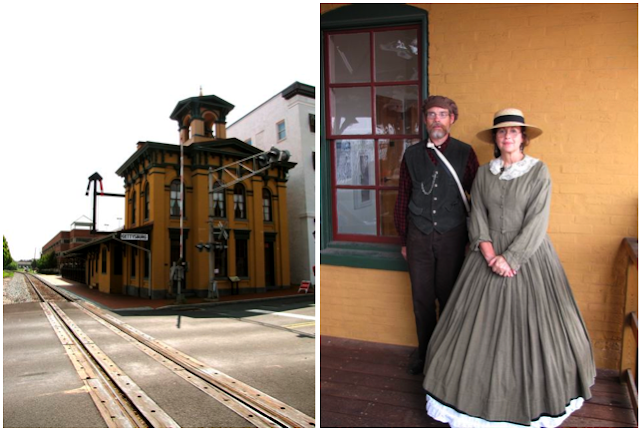 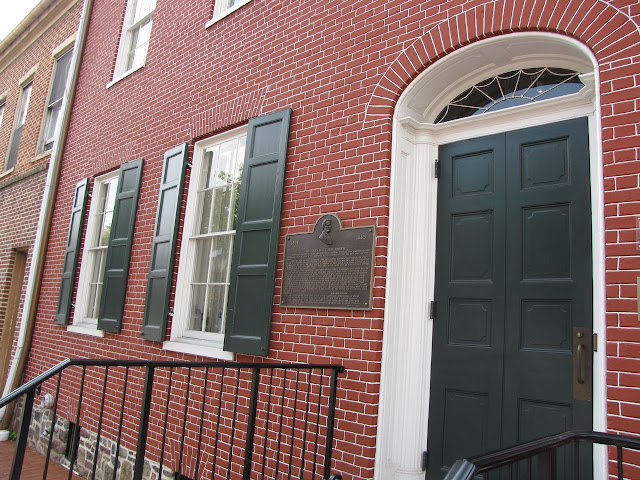 David Wills House
----------------------------------------
Next, we followed in Lincoln's footsteps to the recently renovated David Wills House on the square in Gettysburg to tour the residence where Abraham Lincoln stayed the night. Apparently, someone dropped the ball and forgot to reserve a room for the president prior to his arrival in town. With every room booked, David Wills a lawyer who helped with the cemetery planning, offered the president a place to sleep for the night. The house has been restored to its original 1863 appearance, including all the furniture that Lincoln used while staying in the guest bedroom upstairs. It is believed he may have worked out the final version of his speech within this room, although this is open to endless debate. No one, including Lincoln, could have predicted that his short speech, known as the Gettysburg Address, would go on to become one of the most famous speeches of all time. 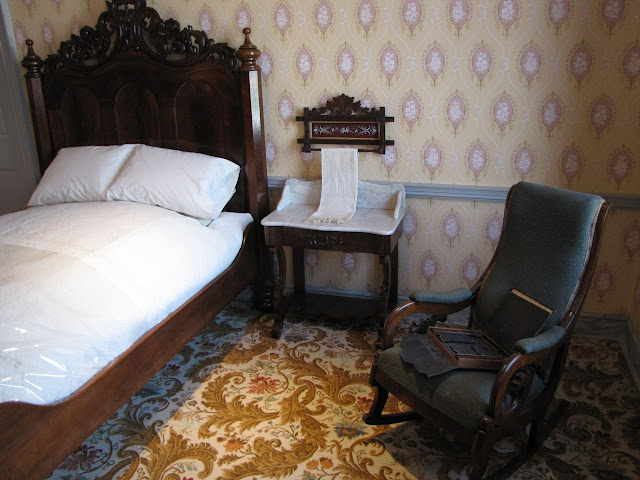 Lincoln Bedroom / Wills House
--------------------------------------------------
The various rooms of the home have been transformed into well laid out museum displays with various artifacts. The Power of Place was certainly apparent in the upstairs bedroom where Lincoln walked, worked, and later slept. It is obviously the main attraction of this historical landmark. On that evening, a large crowd of onlookers gathered outside the house located on the corner of York and Baltimore Streets. Lincoln periodically played celebrity by appearing in the window to wave to the enthusiastic crowd. The restored landmark home was finished in time to commemorate Lincoln's 200th birthday in 2009. The site is now part of the National Park Service and the Gettysburg National Military Park, even though it is physically disconnected from the battlefield. This type of park status takes special consideration and can only be accomplished through an act of Congress, which was approved and passed. 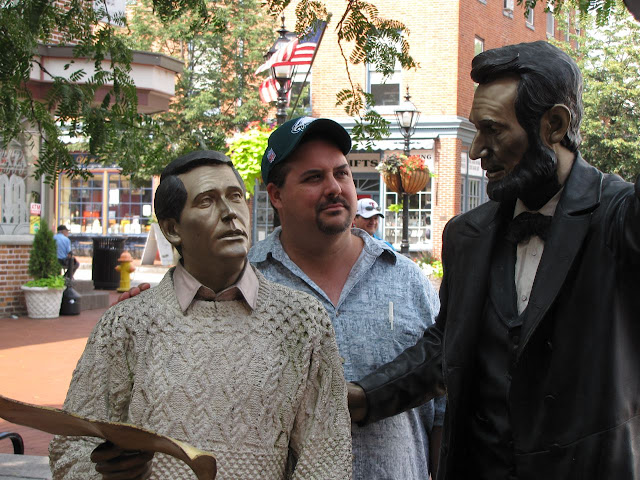 Lincoln Statue / Gettysburg Square
----------------------------------------------------
One of the most famous spots on the square is the statue of President Abraham Lincoln gesturing to a tourist to check out the David Wills House. The tourist, who could use some fashion advice from the show What Not to Wear, always wears a sweater no matter how hot and humid it is outside. One benefit of this attraction is that if you stand between them and get your picture taken, you come out looking really cool, hip, and well... alive! Wouldn't you agree? Never mind, please don't leave a comment below that would hurt my self-esteem. 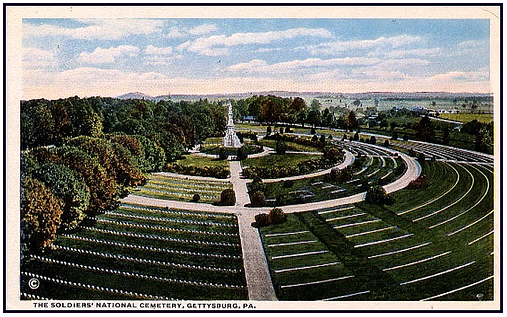 National Cemetery Layout
----------------------------------------------------
Now on with our story, we continued on to the new cemetery Lincoln came to help dedicate. The town of Gettysburg faced a total heath crisis following the Battle of Gettysburg. Over 50,000 causalities were left behind in the aftermath of the battle as the armies moved south into Virginia. The dead were buried haphazardly in shallow graves in the sweltering summer heat. It was said that you could smell Gettysburg twenty miles before you arrived. Over 22,000 wounded needed treatment. They were scattered throughout the town, sheltered in barns, churches, and the shade of trees. Soon Camp Letterman was created on the edge of town as a massive field hospital where the wounded from both sides were treated and slowly transferred by rail to large hospitals in Philadelphia and Baltimore. Gettysburg was still very much in a state of recovery when President Lincoln arrived on the eve of the cemetery dedication. 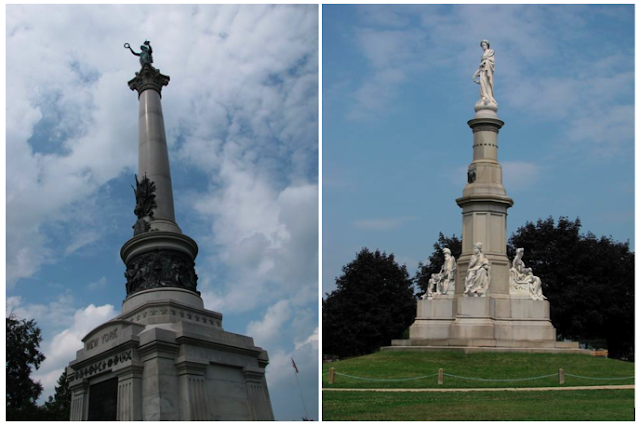 National Cemetery Monuments
----------------------------------------------------
The cemetery itself came about mostly from concerned citizens who lobbied for a final resting place for the fallen Union soldiers. The State of Pennsylvania agreed and Governor Curtin appropriated funds for the project. The cemetery was designed in a semi circle around a center monument, seen on the photo above on the right. The site was also home to the New York Monument commemorating the state that lost the most soldiers during the battle, shown on the left. It is one of the largest monuments ever dedicated at Gettysburg but was placed near the bottom of the slope so it would not upstage the center monument and focal point of the design. The soldiers were laid out in a semi circle pattern with sections devoted to individual states and the unknown dead. The Confederate fallen remained on the battlefield until they were removed in the 1870's to southern cemeteries. However, several confederates were buried within the National Cemetery by mistake and are a point of interest for visitors. Over 10,000 people came to the dedication and the ground has been sacred ever since... to northern visitors. The south was left out. 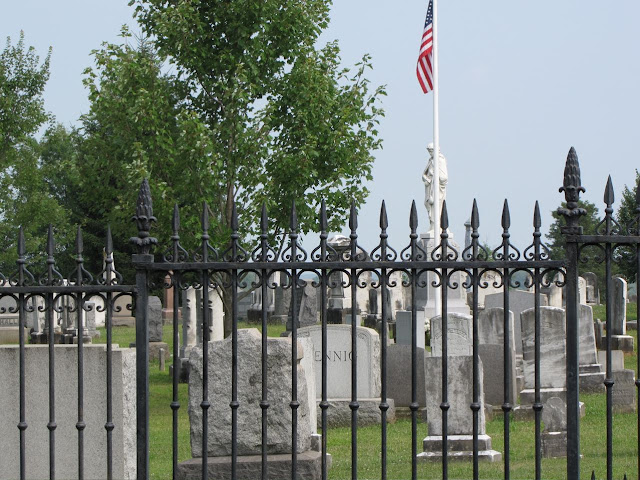 Ginnie Wade Grave Site
----------------------------------------------------
It was recently discovered the monument marking the spot where Lincoln gave his famous address was actually incorrect. The actual spot is occupied by another famous person from the battle. Apparently, the grave site of Ginnie Wade (the only civilian killed during the three day battle) is the actual site of the speech. Although the spot is only about 30 yards away from the celebrated spot, it is actually not part of the national cemetery. The town cemetery expanded over the years to cover the speech area with graves right up to a large iron fence that was erected to separate the two cemeteries. An American flag marks the approximate spot (see above) but most think it is part of Ginnie Wade's grave site. Incidentally, you might wonder about the time line of this description, until you realize... this is the fourth resting place for the body of Ginnie Wade. Why they can't just move her one more time is a mystery... You think she would be used to it by now! 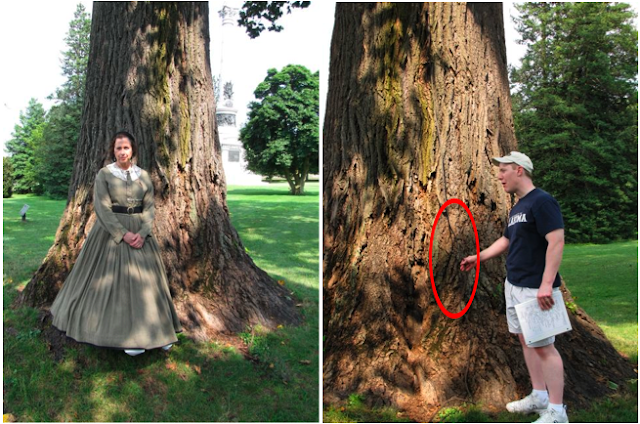 Cemetery Tree Preservation
----------------------------------------------------
One other interesting point to mention... Someone was concerned that the original trees from the battle that were still standing were also in danger and were being destroyed by lightning. So... Every tree that could be identified as original to 1863 is now protected by a lightning rod. Someone crawled to the top of each tree and then ran a cable down the trunk to the ground. See picture of our guide Dr. Ben Dixon next to the large tree, he is holding one of the cables (not something you should do during a thunderstorm). The funny thing is... It works and the trees are living longer happier lives void of death from lightning. A lightning rod cable is what now designates which tree is an original 1863 tree! 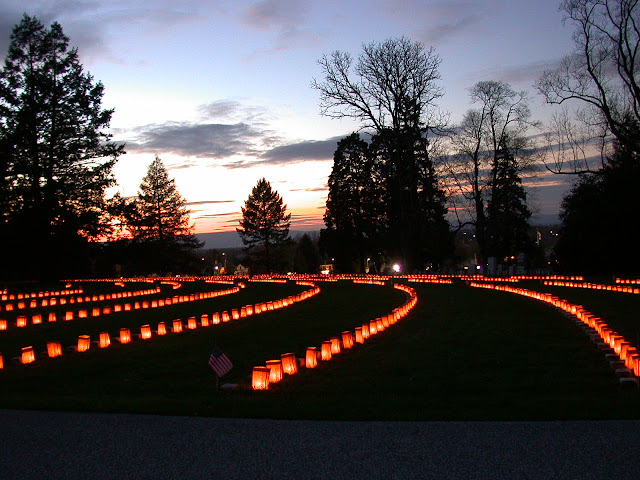 Rememberance Day Tribute
----------------------------------------------------
Every November Remembrance Day is observed in honor of the fallen from one of America's most tragic chain of events. Reenactors from all over the country merge on the hallowed ground to pay their respects during the laying of wreaths ceremony. There is a parade through town and then an evening illumination to conclude the annual event. I have participated in parts of these ceremonies with members from my reenacting unit from Lancaster, the Pennsylvania 30th Volunteers Company E. It is a moving experience for all who attend.

Note: The cemetery was later opened to burial of Adams County veterans from all wars.