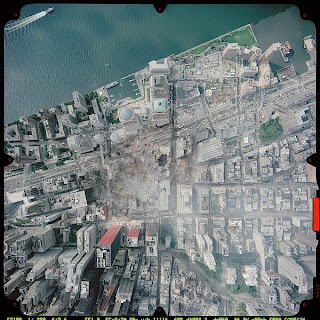 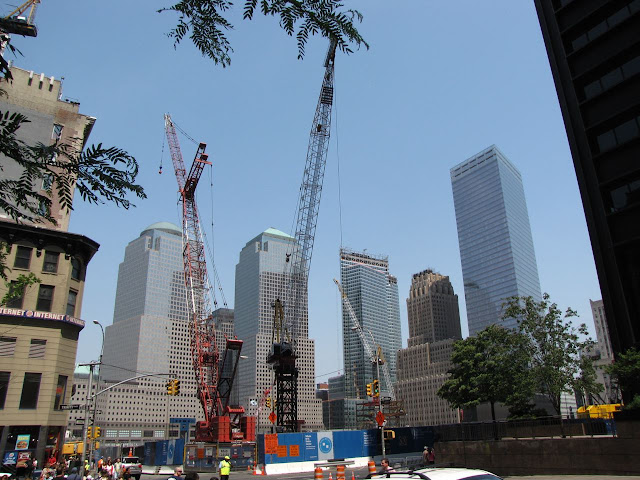 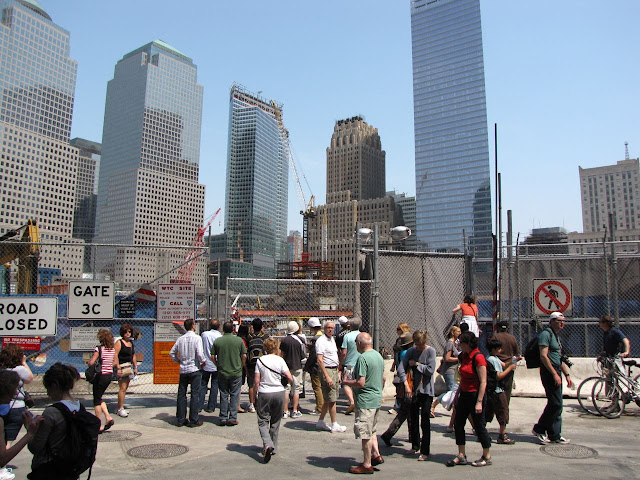 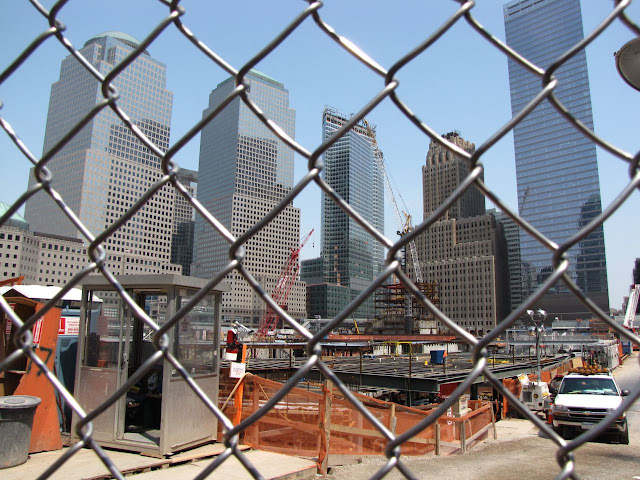 View Through Gate C-3
-----------------------------------------------
It is hard to get a good view of the base of the site because the entire area is surrounded by a tall chain link fence that is blackened out to block your view. The only way to really see anything below the fence line is to find one of the gates where heavy equipment can descend into the belly of the site via a network of ramps as shown in the picture above. People are drawn to these doorways and gather to get a glimpse of sacred ground but remain shut out by the large chain link gate and site security guards. 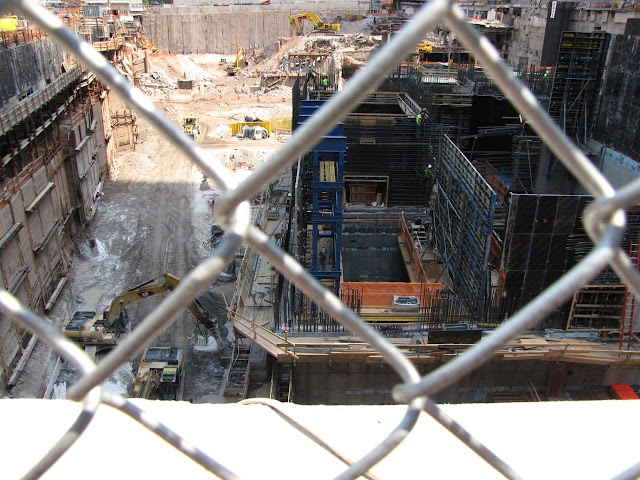 View Into the Pitt
-----------------------------------------------
I was told that there was an observation deck for tourists located at some point along the construction fence edge, but the huge size of the perimeter would make finding it quite a hike. However, I was able to find a small hole in the material covering the fence that was high and almost out of reach. I was able to stretch out and point my camera lens down through the gap without seeing what I was shooting but came away with the following two captured frames seen above and below this paragraph. 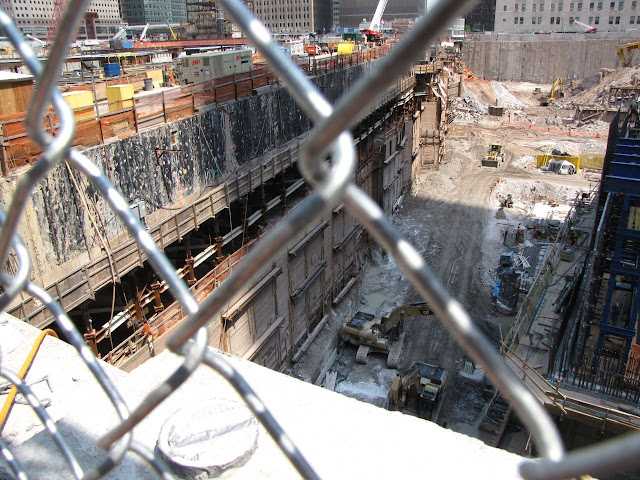 View Into the Pitt
-----------------------------------------------
A lot of talk and has been batted back and forth of what to do with the site. To many, the sixteen acre plot it is now sacred ground to which they have an emotional connection, and argue it should become a national landmark. On the other hand, the site is one of the most valuable commercial properties in the world with its close proximity to Wall Street and the financial district of New York. Talk of building the Freedom Tower persist but so far nothing seems to be happening and that is just what most people want. 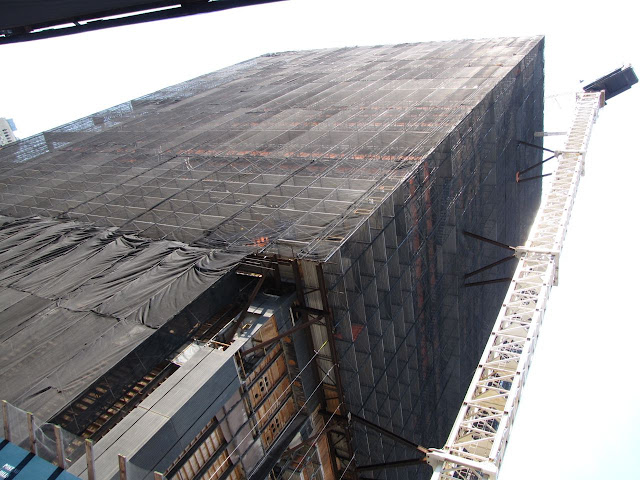 Deconstructing Process
-----------------------------------------------
This building pictured above is the Deutsche Bank Building, which did not fall during the attacks, but was so damaged from toxic dust during the event that it was deemed as unrepairable and must now be destroyed. However, it is located just outside the fence perimeter and as a result, must be disassembled one floor at a time. It is a very slow process but is a necessary procedure to protect the surrounding structures that were unharmed or have since been repaired and are currently open for business. 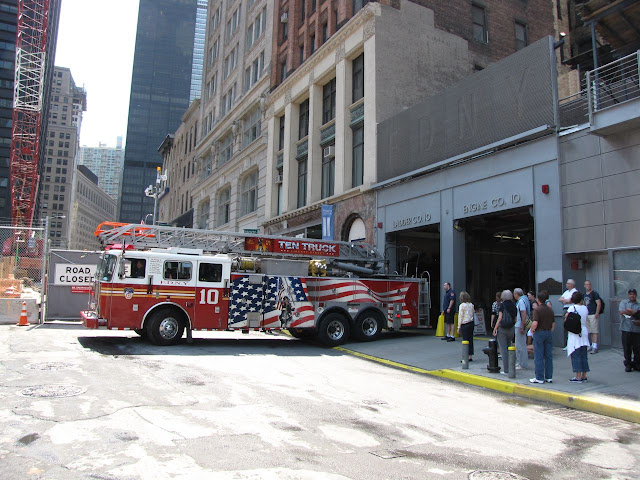 Station 10 Fire Truck
-----------------------------------------------
The (3C) gate we were viewing the site from is also home to Fire Department Engine & Ladder Company # 10 who are located just off the site. They were the first to respond to the call on that fateful morning and sadly lost six members of their crew when the towers collapsed. Just around the corner of the station on Liberty Street is the F.D.N.Y. Memorial Wall, which commemorates the ultimate sacrifice of the fire fighters who lost their lives trying to save others within the towers and surrounding structures. 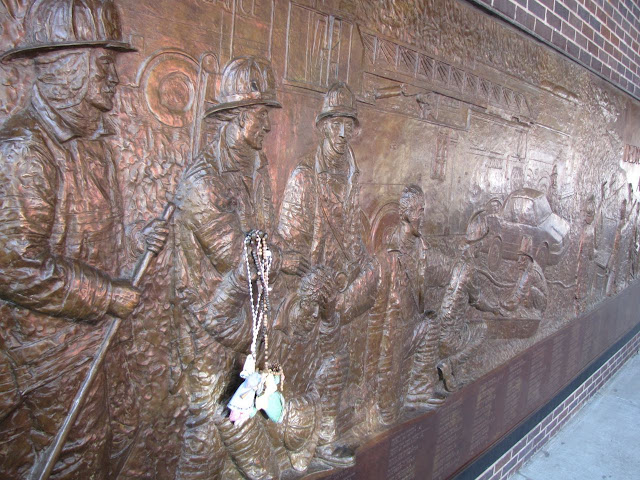 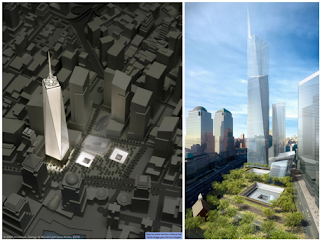 Freedom Tower Concept
-----------------------------------------------
Above are artist concept drawings of the proposed Freedom Tower, which may resemble and reflect the future of the World Trade Center Site. Some form of structure someday will rise within the site and attempt to frame the watershed moment with the construction of steel and stone. Regardless, the true monument and memorial will always remain within individual space, supported only by our own thoughts, memories, and remorse.