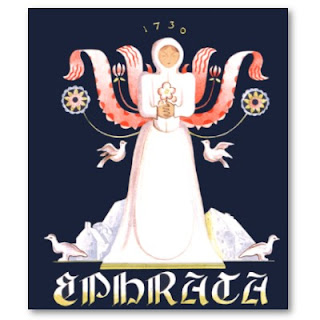 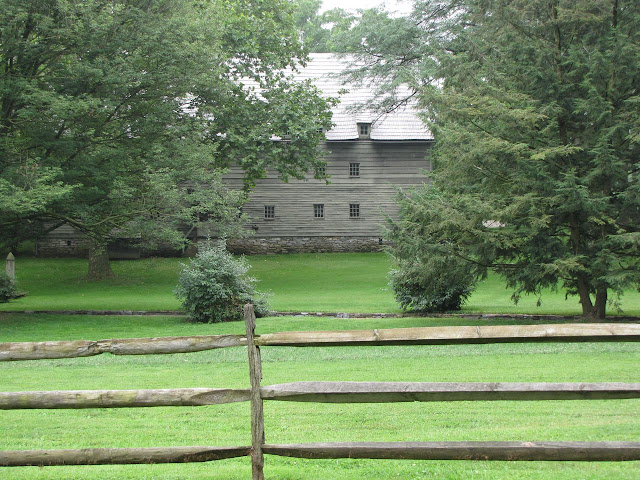 The Sister's House
-------------------------------------------
Today I headed out to absorb some local history solo with the kids home still in bed. My suggestion to go out and tour a preserved colonial religious community campus was met with less than an enthusiastic response? I know it's not Hershey Park but... come on! Anyway, it was their loss and I wasn't about to let their Johnny Rain Cloud attitude ruin my historical fun! I grabbed the camera and headed to Ephrata almost next door to see where it all began. 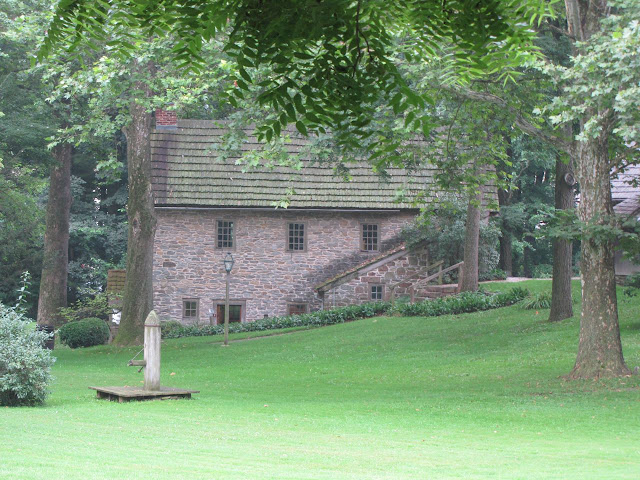 The Bake House
-------------------------------------------
The story begins with a young man named Conrad Beissel from Germany who lost both parents by the age of eight. He learned the baking trade and traveled across the region wandering from place to place. On the road, he began to seek out religion and soon identified with the separatist movement where focus was more on the Bible and less about politics. Like many in conflict with the established church, Beissel sought a place where he could pursue his quest in peace, free from persecution. He soon accepted the open invitation from William Penn, proprietor of Pennsylvania, to join him in Penn's Woods and become part of the Holy Experiment. 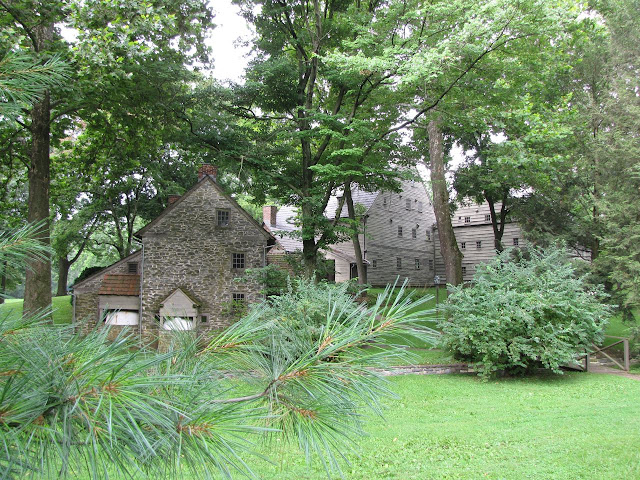 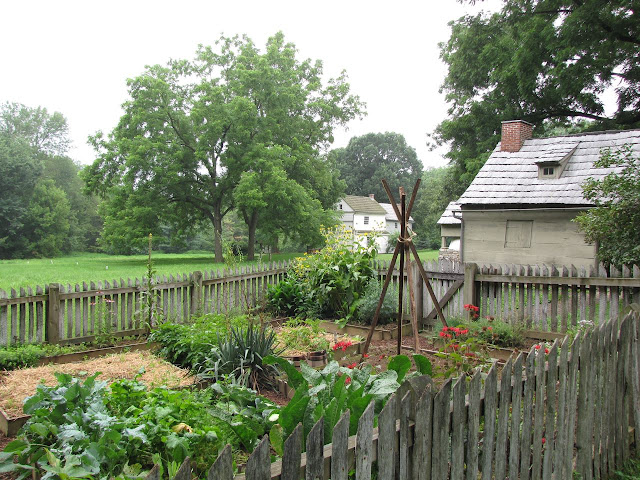 Vegetable Garden
-------------------------------------------
People began to flock to Beissel and although he first intended to live as a hermit in the wilderness, people joined him on his religious journey and looked to him as their spiritual leader. A community grew up around him and the group numbered close to 300 at the movement's height. The group was divided into three groups including men and women who lived separate celibate lives in large dormitory style structures that were 4-5 stories tall. The three buildings were the tallest structures west of Philadelphia. People were in awe when they came upon them in the middle of the wilderness and today they are often referred to as colonial sky scrapers. One still stands today and is the centerpiece of the historical community. The final group were families who lived on the fringe of the community and attended services on the Sabbath which Beissel believed was on Saturday, the seventh day of the calendar week. 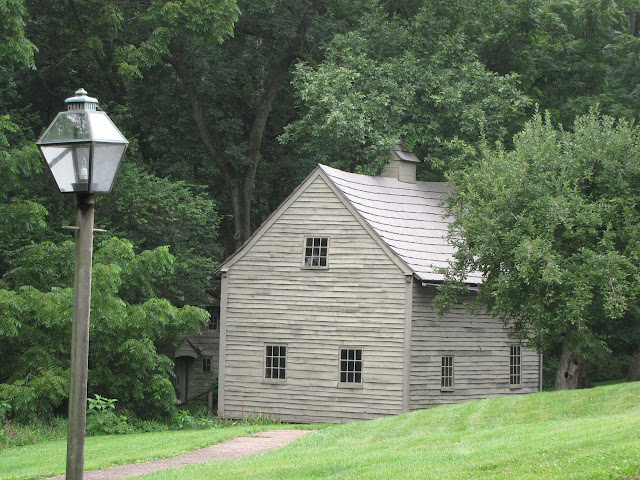 Carpenter's Shop
-------------------------------------------
It was not easy to be a full member of the monastery like community. Beissel believed that Christ would return to earth within his life time and believed their sacrifices would be temporary. The group often awoke after midnight each night for a two hour watch for the return of Jesus. Their day started at 5:00 in the morning and was a flip flop of periods of work and prayer throughout the day. Beissel believed people should lived their lives in the image of Christ and he believed Jesus slept and ate little. The people of Ephrata only slept six restless hours a night on hard wooden benches using a wooden block as a pilliow. Beissel beleived that people were most vunerable to the Devil and evil during a deep sleep so his goal was to keep them from getting a good nights rest. 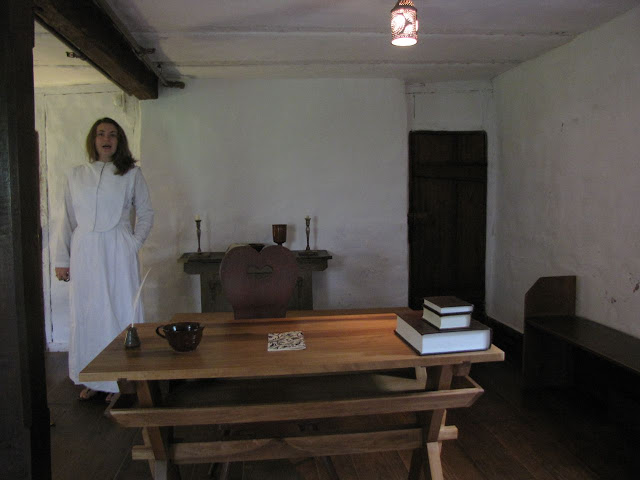 Beissel's Desk /Study
-------------------------------------------
The followers on site only ate one meal a day in the late evening which usually consisted of grains and vegetables. Lamb was occasionally served when the male and female groups came together in a Love Feast communion that marked special occasions determined by the church elders. The people worked in agriculture, carpentry, paper making, printing, and providing education for the area children. Beissel loved religious hymms and wrote over 500 songs despite the fact he had no formal music instruction. When Beissel died in 1768 at the age of 77 the group began to decline in membership. Beissel's proficacy of Christ returning within his lifetime did not come true and the faith of the community was effected. Peter Miller took over the congregation but had a hard time keeping the group together. Eventually the celibate church membership died off and the remaining followers formed the German Seventh Day Baptists. 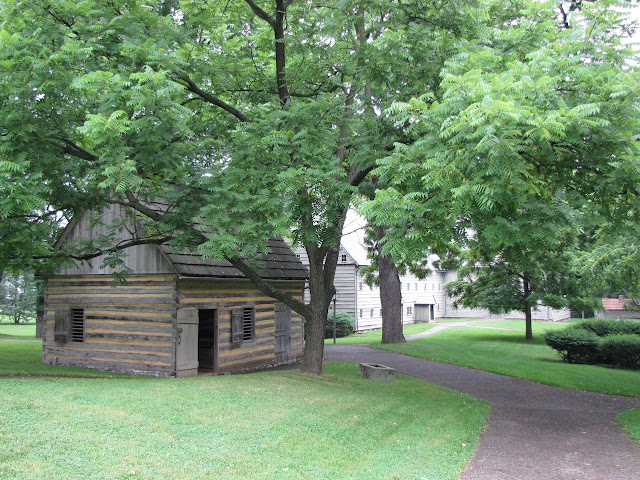 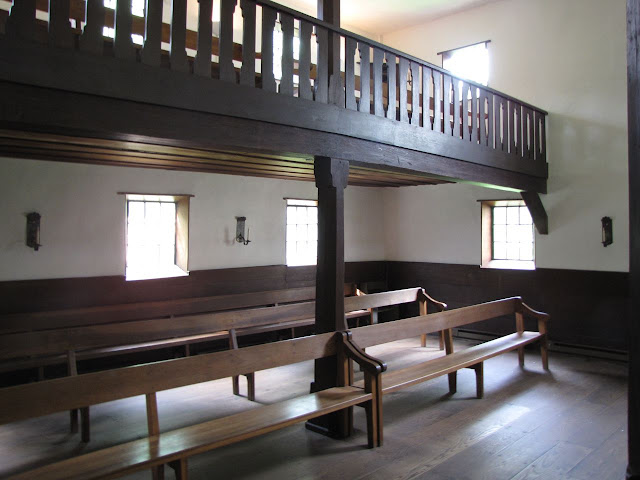 Church Interior
-------------------------------------------
Overall I thought the community was beautiful in the early morning light which really brought out the greens of color throughout. The gift shop was really interesting offering a wide array of unique gifts and historical reproductions. I couldn't help but purchase one of the wooden pillow blocks for eight bucks. And as their creative billboard along Route 322 states... No Pillow Fights Allowed! 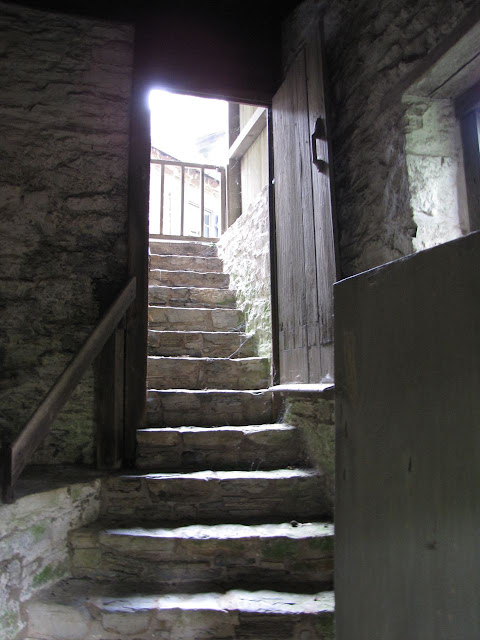 Posted by Camp Martin Travels at 10:43 AM