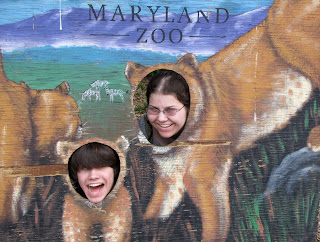 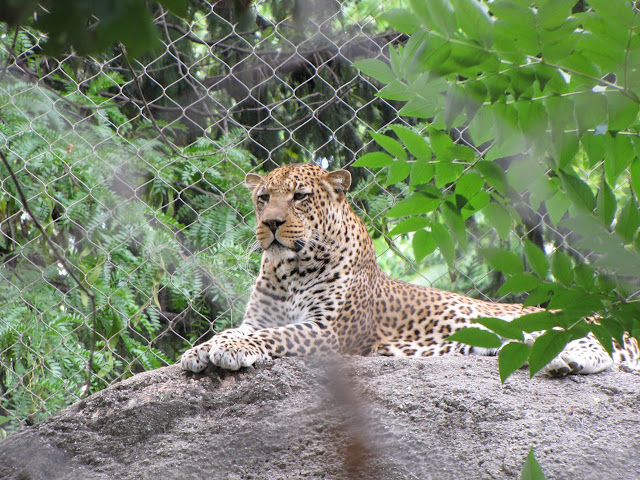 Big Cat Looking Hungry
-------------------------------------
For our very first adventure of Camp Martin Travels, I decided to venture to another state, well... just next door in Maryland. Last year Katelyn and I had visited the Philadelphia Zoo and decided to see what Baltimore had to offer.  We dragged Katelyn's brother Tyler out of bed and fastened him into his seat belt before he regained total consciousness and sped out of the driveway.  I went all out and purchased an iPhone when I recently had to upgrade my cell account and was now able to GPS my way around the globe or... right next door to Maryland. To everyone's surprise, we found Maryland on the first try and then the zoo itself.  We pulled into the parking lot and made our way to the front gate.  An exotic jungle adventure was just around the corner. 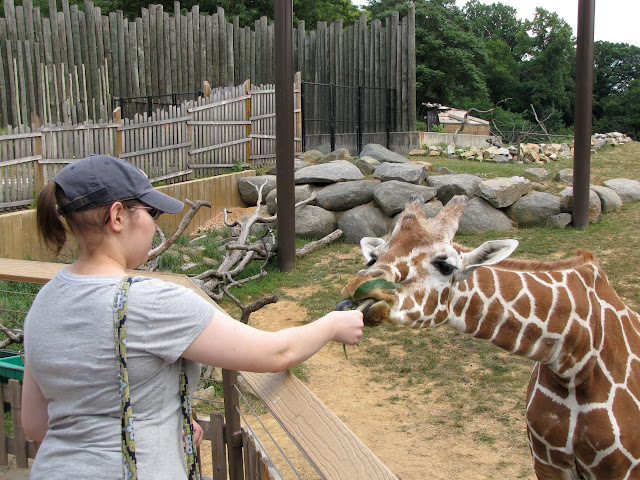 Part-Time Zoo Keepers
-------------------------------------
The Baltimore Zoo is officially known as The Maryland Zoo at Baltimore and was first opened to the public in 1876.  Today the zoo has over 2,000 animals and also serves as a care center for wounded local wildlife, including birds of prey.  It was a hot summer day and we were thankful for the shuttle that transported us to the exhibits we were most anxious to see.   Tyler was now fully awake and aware of his surroundings but was a good sport despite being kidnapped.  Tyler had never been to a zoo before and took it all in with as much false enthusiasm as is possible for any fourteen year old to exhibit.  The highlight of the day came early when the kids got to feed the giraffes (for a small additional fee) and it was a great photo opportunity for Dear Old Dad. 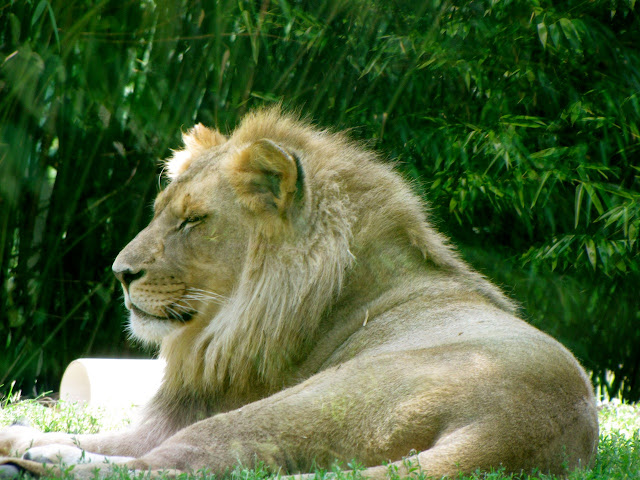 King of the Jungle
--------------------------------
We were able to see a variety of animals from Africa without the cost and dangers of actually traveling to another continent.  The Rock Island exhibit featured the African black-footed penguins, where the zoo has had great success with their penguin breeding program, producing more chicks than any other zoo.  All of the exhibits were well designed and resembled the natural habitat of each animal.  You really felt like you were in Africa, navigating you way through pathways, abundant with green foliage and even waterfalls.  The large African Journey exhibit was impressive and the animals were mostly easily visible despite the heat of midday.  I had never seen an African Lion that close before, easily seen through observation points along the route.  It was a pleasant contrast to the zoo I visited as a kid, which had the dangerous animals contained behind bars in large cages, where they frantically paced back and forth.  The big cats here seemed relaxed and content, at home in their recreated natural habitat. 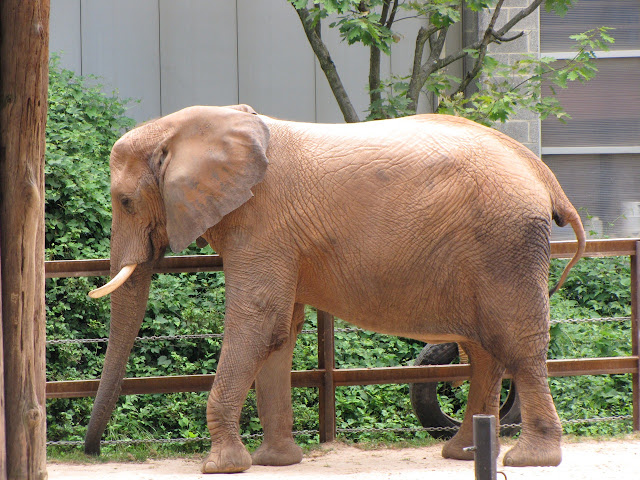 African Elephant
------------------------------
Along with the lion, the other star of the zoo would have to be the African elephants.  The zoo first opened its first elephant exhibit in 1920 with a single Asian elephant named Mary Anne.  The elephant was purchased with money collected by local school children who ran various fund raising efforts throughout the city of Baltimore.  Today the elephant exhibit at the Baltimore Zoo is part of the African Journey section of the zoo and continues to go through expansion programs.  As the habitat grows in size and the site's facilities are enlarged and improved, more elephants continue to arrive.  They are coming from other zoos who do not have the space or facilities to properly care for the large animals.  The goal is to provide a realistic habitat and range similar to their native environments.  The hope is to create a breeding program to ensure that the elephants continue to thrive and remain protected within North America.  Recently a new elephant arrived from an Arkansas zoo that arrived pregnant and soon gave birth to a healthy calf named Felix. 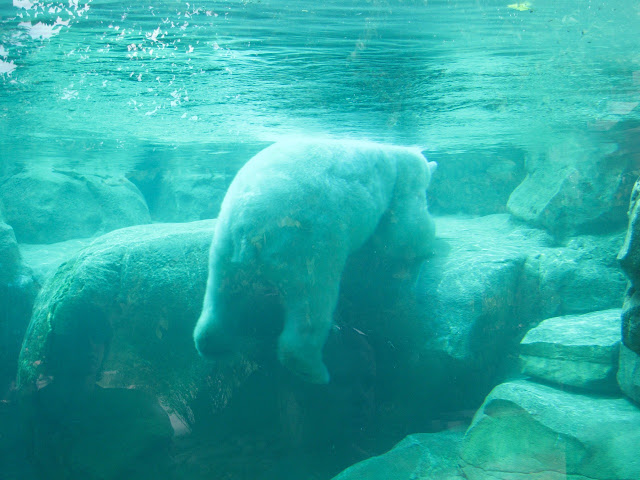 Polar Bear Arctic Exhibit
-------------------------------------
We were all surprised by the amazing polar bear arctic habitat area that had the look and feel of far reaches of the north, despite the summer heat.  The polar bear is continuing to face challenges with global warming and the constant disappearance of the arctic ice flows they depend upon for their survival.  In this exhibit, there was a large pool surrounded by large rocks that mimicked the frigid arctic waters of their natural habitat.  We were fortunate enough to be there when the bear decided to go for a swim.  There were observation points to take in the view from above the pool but we soon discovered there was an aquarium-like window to see the action from below the waterline.  It was very cool to see the bear swimming from our underwater vantage point.  We were all a little envious as he seemed to be having a grand ole time, cooling himself off while we suffered in the hot sun.  It was a very creative way for the visitors of the zoo to get a unique view of such a large, beautiful, and yet dangerous wild animal. 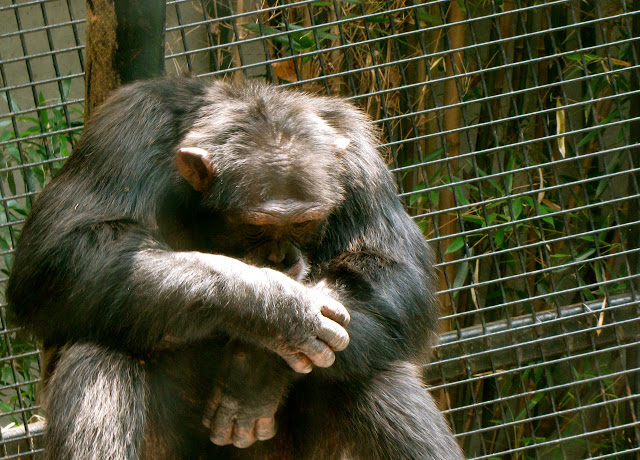 Exhausting Day of Being Watched
------------------------------------------------
My favorite part was the chimpanzees at the Primate House, where I got a great picture of a chimp who looked like I felt by the end of the day.  My least favorite part was lunch because the food was expensive and made public school cafeteria food seem like four star gourmet in comparison.  Our trip ended at the all important stop at the gift shop to acquire physical evidence that we were here and could now remember our experience for eternity.   The kids were tired and ready to go home but I had other plans in mind...  Why not top off our fun filled day with a little history that was close by and possible to find easily with my new little GPS friend...  Stay tuned... 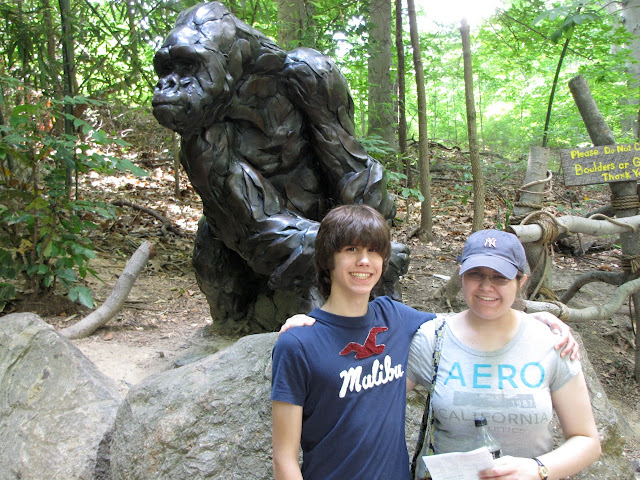