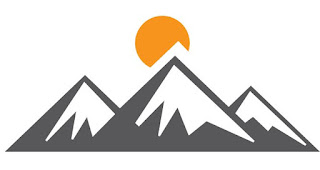 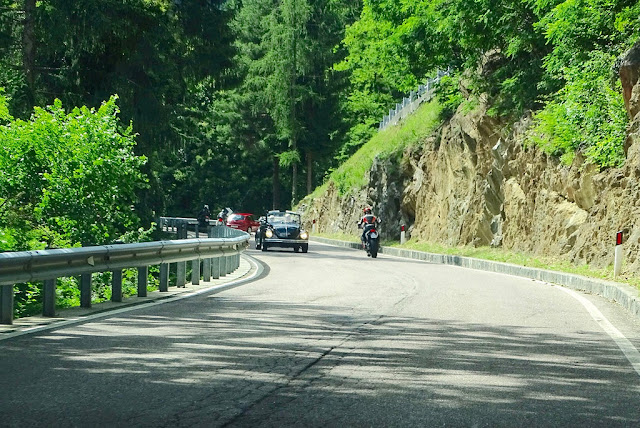 Approaching the Pass
-----------------------------------
As we climbed ever higher, the valley below began to shrink in scale.  The road signs showing the upcoming road path looked more like warning signs for lightning bolts.  We were climbing the mountain like a zigzagging ladder of switchback turns.  With every hard turn in the opposite direction, Andy let out a big “Yee-Ha” cheer and our van scaled the mountain upward like a four wheeled mountain goat.  It was amazing to think how the road was ever constructed in the first place, a monument to man’s sheer determination to find the way through to the other side. 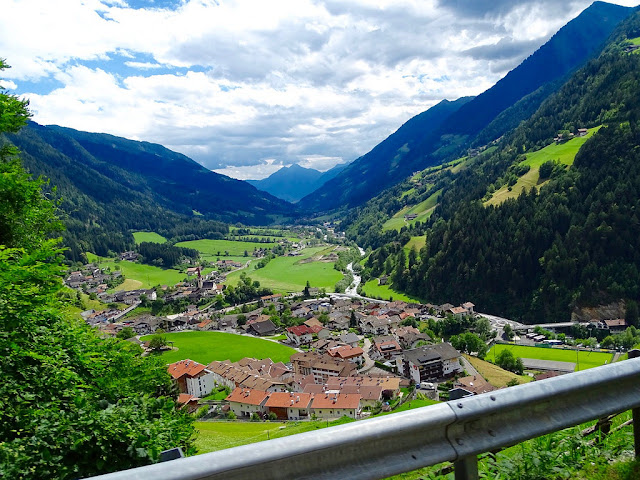 Leaving the Valley Below
--------------------------------------
To add to the excitement of the twisting roadway, was the sight of the sheer drop off into an ever-shrinking abyss below.  Add in the fleet of motorcycle enthusiasts who saw the Juafen Pass as their own personal racecourse and playground.  Motorcycles appeared out of nowhere in both directions, often in pairs.  They would pass other vehicles of the four-wheel variety, just as they approached blind curves ahead, which concealed any and all oncoming traffic.  It was shocking when motorcycles would appear without warning from around tight blind turns right at you at high speed.  The other hazard on the road, which was on the complete opposite end of the vehicle spectrum, was a farm tractor.  Suddenly, as you turned the corner there was a tractor right in from of you, crawling on the road, most of which looked like they were made before World War II.  The tractors seemed like moving pylons to the motorcycle crowd, an additional challenge to master. 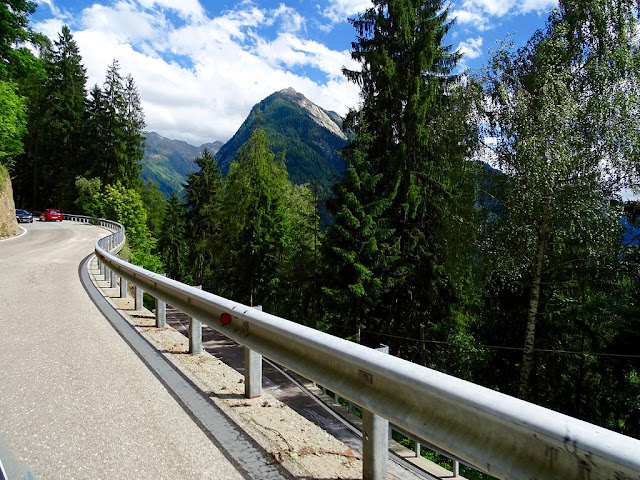 The Edge of the Road
-----------------------------------
Eventually, we caught glimpses of the roadway to come above our current position, as we were about to go above the tree line of the mountain.  We were now on the exposed slopes of the mountain, driving along the clouds to one side and avalanche protection fences on the other.  Finally we came to the rocky summit, where there was a place to pull off to see the view.  There was even a small café located there, built up against the rock called the Edeweisshutte.  I wondered how crowded it was in the dead of winter during a blizzard?  There were many cars and even more motorcycles parked about.  I had never seen a real edelweiss flower and once again took the opportunity to search briefly for the elusive plant but came up empty handed. 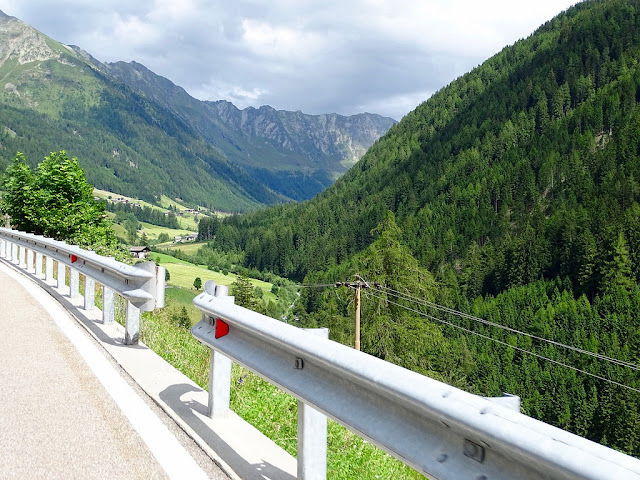 The Green Italian Alps
-------------------------------------
However, I did grab a piece of the mountain to add to my collection of rocks of my travels.  Each trip I have brought home a unique looking piece of physical evidence from the continent.  First trip resulted in a piece of green smooth eroded stone from the River Inn near Marktl.  Last trip I came home with a chunk of quartz from the top of the Waltzman Range above Eagles Nest near Berchtesgaden.  And now I had a piece of the summit of the Jaufen Pass to join the other two pieces in the jar on my classroom desktop.  After taking the time to scout around and take a group photo, we were back in the van, ready to begin our descent back down to civilization.  Andy had been glad to have a few minutes rest, as the drive to the top was fun but tiring at the same time. 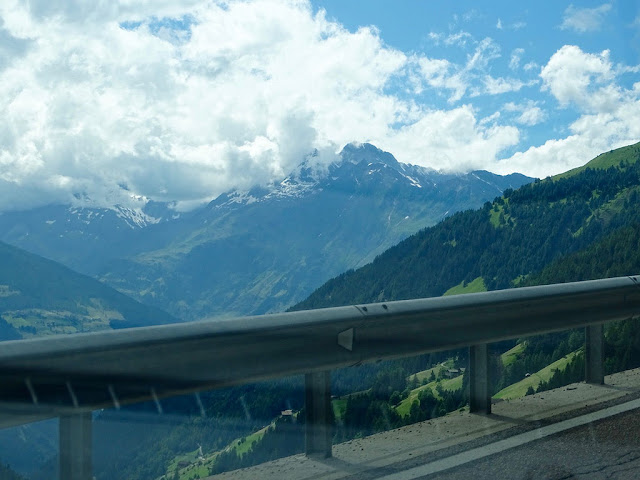 Approaching the Summit
-----------------------------------------
On the downward slope, we followed a high end, beautiful white Audi sports car that ran into an unanticipated problem; a very slow rider on a motorcycle.  As we snaked down the mountain switchbacks, the Audi showed amazing patience… like it had any other choice.  And then there were the occasional tractors!  Fun!  The slower pace enabled me to get some great pictures, and the scenery was awesome!  We came to the bottom to find the same highway we had traveled down the previous day.  We headed toward Innsbruck, Austria and left the beauty and adventure of Italy behind us. 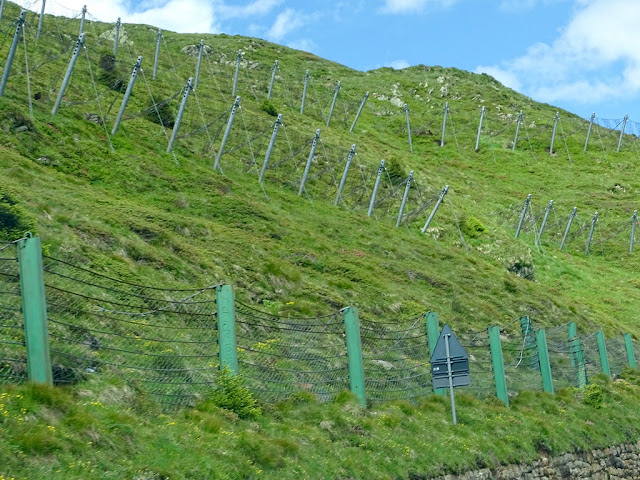 Avalanche Fences Above Tree Line
----------------------------------------------------
Unlike the dreary drive under cloudy and rainy skies on Saturday morning, the sun illuminated the beautiful mountains with rocky summits and green slopes.  Some of the mountaintops were covered in snow in complete defiance of the heat of the July sun.  The radio was playing mostly American pop and when the song Wonderwall by the band Oasis came on, the volume was turned up and all began to instinctively sing along with the girls in the back seat even providing the echo of the chorus.  It was a great moment and was reflective of the mood of the entire weekend experience.  It was a great weekend filled with adventure, history, exploration, photography, natural beauty, soccer, food, shopping, and best of all… great friends! 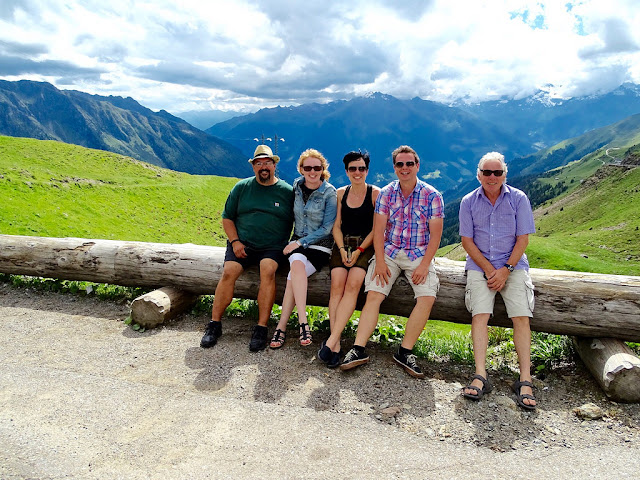