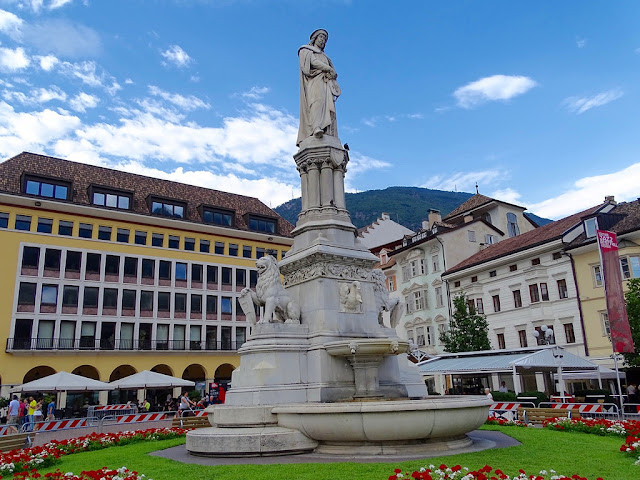 Plaza Center of Bolzano
--------------------------------------
After dropping off our luggage, we agreed to regroup down in the lobby and then went outside, where it had just stopped raining.  We went out front of the hotel and as we came outside, realized our old world hotel with modern conveniences was located right on the edge of the historic town square.  An art deco styled restaurant and accompanying outdoor seating area ran the length of the hotel and slightly spilled out onto the square. We sat at one of the exterior tables overlooking the cobblestone square, enjoying a traditional white wine mixed with a sour orange citrus flavoring.  It was a traditional Bolzano drink, created by grapes from the surrounding vineyards we had passed along the road.  Everyone was drinking it, along with a bruschetta topped with various olives, tomatoes, cucumbers, and some sort of white, wet cheese, which Andy had ordered for me so I could experience the traditional fare. 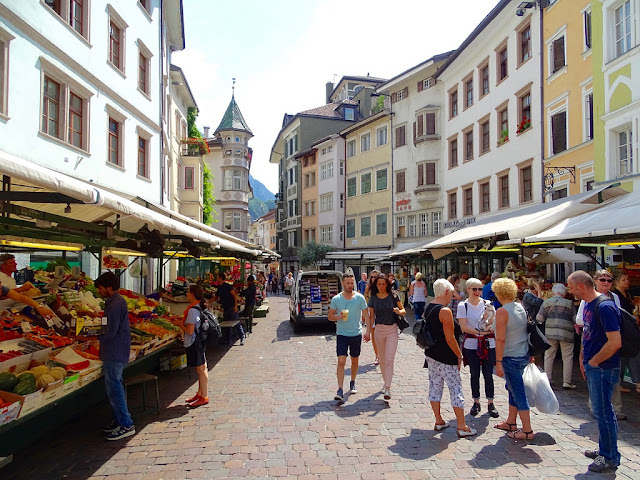 Exploring Streets of Bolzano
------------------------------------------
Ironically, Andy had ordered a toasted ham and cheese Panini on fresh baked Italian bread, which was more to my liking.  Not a fan of wet cheese or olives, I asked him if he wanted to split our selected snacks to experience the variety.  He agreed, most likely suspecting I was not keen on what was served to me.  I ate around the parts on my half I didn’t like and then passed off the remaining half, which had an abundance of wet cheese and olives as a topping.  The toasted cheese sandwich was delicious and really helped dissipate the strong olive taste in my mouth.  The orange-white wine was a little bitter, with a strong sour citrus taste.  As we enjoyed our food, wine, and the view of the plaza, the sun had returned and stayed the rest of the weekend. 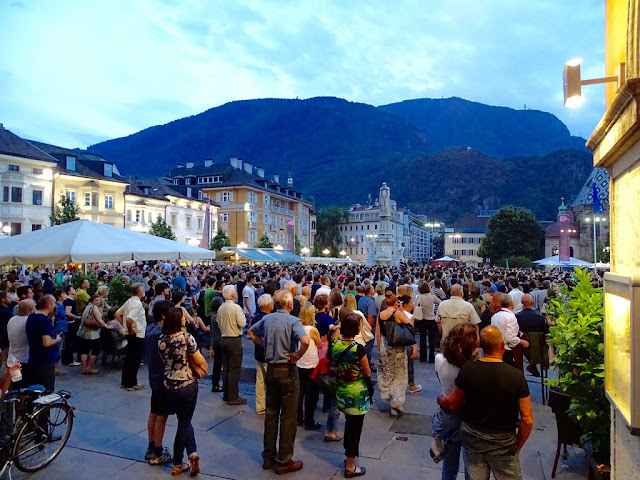 Watching the Euro Cup
-------------------------------------
The large square was surrounded by many other hotels and accompanying outdoor cafe seating areas.  Tonight was special because Italy and Germany were playing a soccer match in the 2016 Euro Cup.  The tournament was down to eight teams and the stakes were high.  One section of the plaza was being set up for a public viewing, where the game would be broadcast on a large screen enabling the entire town to watch the game together and cheer on their team.  I have heard of public viewings before but have never attended one in person.  Just by chance, I would see my first one in Italy where the country we were visiting was competing against Germany, our country of origin.  What were the odds? The game would not start until late evening, so there was lots of time to explore the old historic city.  My group of fellow companions were continuously saying this trip was all about me, a celebration to mark my upcoming 50th birthday, but I doubt it was really all that much of a sacrifice for them.  Italy is renowned for their fashion, style, and high quality goods.  My fellow teachers had come to shop and by the time we headed for home the next day, the car would be filled with packages containing shoes, clothing, and wine.  I was only interested in trying to find a souvenir pin to add to my growing collection. 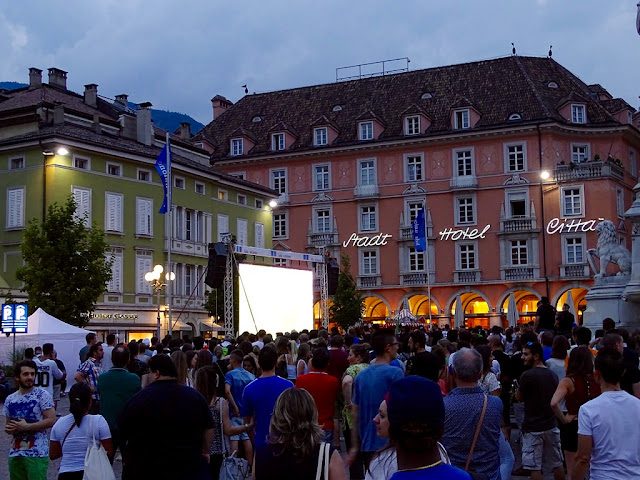 Public Viewing / Plaza Screen
-----------------------------------------------
As my friends went off in search of Italian made goods, I had the opportunity to go off on short spans of time to explore on my own and take some great pictures.  After taking time to explore and shop, we went in search of a good place to eat.  We asked a local merchant for some advice in this area and tried to find the bistro she suggested.  However, when we eventually did find it, there were no tables available.  So, we went off to try and find anywhere that had available seating, as the city was very crowded in anticipation of the public viewing scheduled to begin in two hours.  Surprisingly, we wound up finding a table just off the square near our hotel.  The pregame broadcast had already started and the crowd was beginning to gather, reserving their spot to get a good view of the screen. 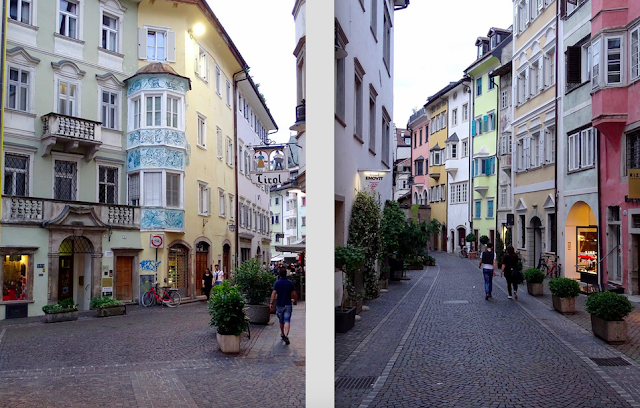 The Evening Streets of Bolzano
-----------------------------------------------
Despite the festive atmosphere, we were located just off one corner to the side and enjoyed a relaxing meal together.  I wanted to order pasta while in Italy and ate a rigatoni dish with a bologna red sauce, which really turned out to be little bits of bologna or wurst mixed into the sauce, which had a delicious but unique taste.  After dinner, most went on to the interior of the square to watch the start of the match but I took the opportunity to explore the town streets further.  It was a totally different city now, with most of the streets deserted and far more peaceful.  However, the game was still visible on flat screen monitors at every bar and restaurant with spectators spilling out into the streets. 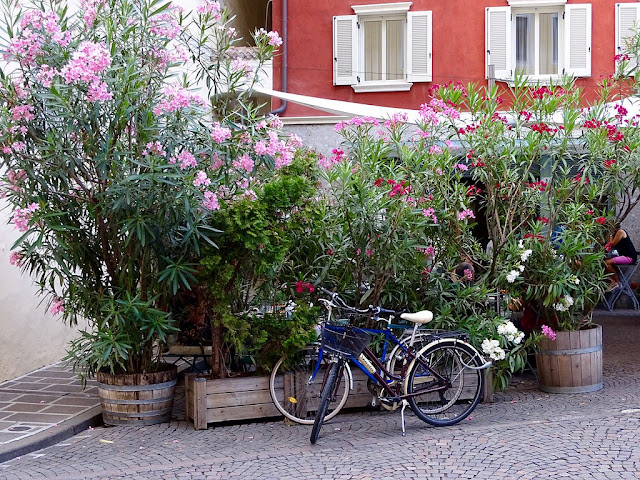 Hidden Street Cafe
--------------------------------
It was the first time I was using the camera in low light conditions, capturing the soft glow of artificial light.  As I went further into the outskirts of Bolzano, the muffled roar of the crowd periodically broke the silence following the play of the game on the field.  I was walking the streets of a historic city in Italy.  Something, I would never have dreamed possible, and yet, here I was… I walked back around to the town square to see the public viewing and the festive atmosphere full of cheers and jeers depending on each person’s country of origin.  Andy estimated the crowd was 75% supportive of Italy, even though they cheered in the German language.  I was able to find Andy in the middle of the crowd and got a few zoomed photos of him, some of which showed an expression of concern. 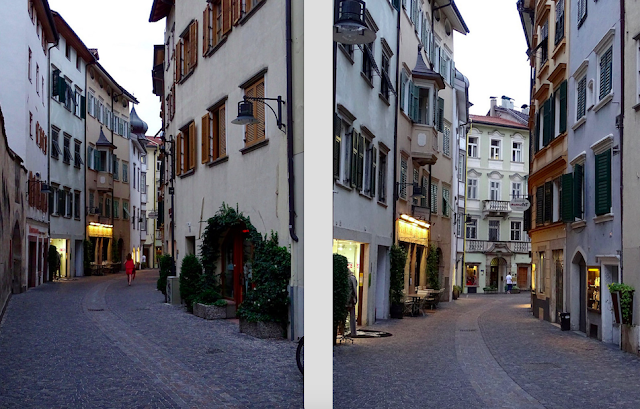 Quiet Evening Streets
----------------------------------
It was a good game and as the first half concluded, I decided to go back to the room for a little private time to work on my pictures and journal.  I opened up the windows to let in the cool night air along with the rise and fall of sounds of the public viewing from just around the corner. One of my favorite memories from this weekend, was sitting within my hotel window, listening to the sounds of Bolzano and looking out over the old world street scene below.  I had the game on the television in our room with the sound off and followed the play with the help of the crowd’s roar from the square.  In the end, the game was a great match with the regular period ending in a tie.  After the overtime period still did not end the game, the outcome was decided by penalty kicks, quite a few in fact.  Finally the Italian player missed and Germany once again had an opportunity to end the game in their favor, and came through with a great kick just beyond the goalie’s reach.  Andy said the mostly disappointed crowd dissipated quickly, but he and friends went out for a celebratory toast! 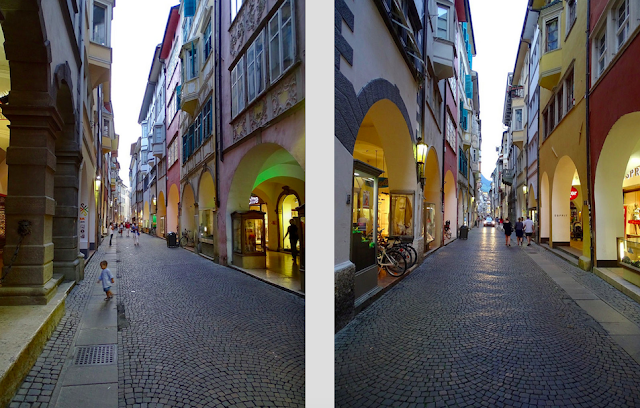 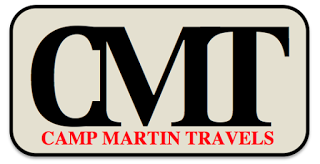