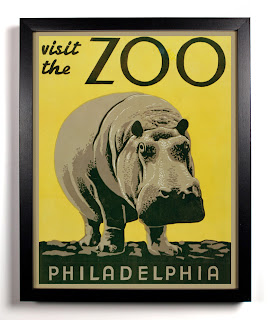 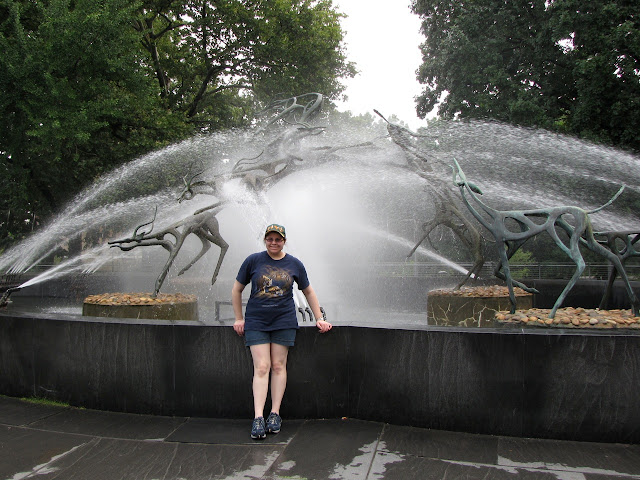 Gazelle Fountain / Main Entrance
----------------------------------------------------
It was predicted to be a hot and humid day in early July but it was summer, so what can you do?  My daughter Katelyn and I decided to head east to the Philadelphia Zoo, located a short distance outside center city.  We had been here before a few years ago and decided to come back to visit some of our favorite animals and attractions.  The zoo is a 42 acre oasis in the shape of a half-moon, flanked by the curve of a multitude of rail lines and the Schuylkill Expressway.  Ironically, your travel route to the zoo becomes more congested the closer you get.  You escape the expressway at the Girard Avenue exit and soon run right into the zoo.  Make a quick turn down 34th Street to find parking for $12, a few dollars short of the price of an admission ticket... an annoying pet-peeve of mine. 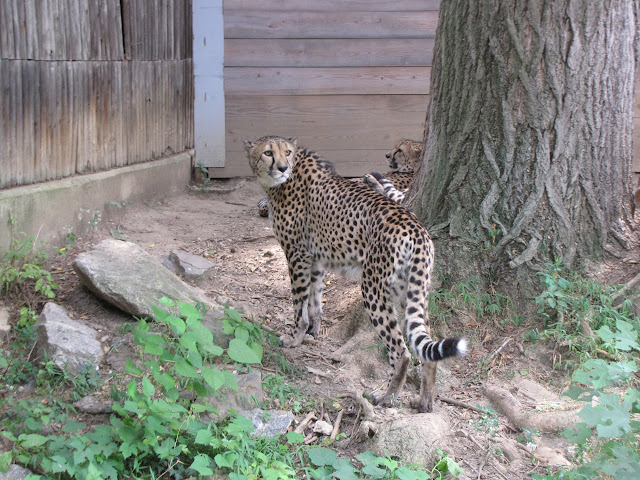 Cheetah Habitat Exhibit
-----------------------------------
We arrived around 11:00 AM, an hour and a half after the zoo opened for the day and the parking lots were labeled full.  Parking along the street is an option but still costs $12 and requires a long walk to the zoo entrance.  A better option is to continue onward to the Frog Parking Lot at the far end of 34th Street where you can usually find a space and enter the park from the back side entrance.  After parking your car and entering through the South Gate entrance, you are just a few short steps away from the exhibits.  Your goal is to see everything so it doesn't really matter what section of the zoo you start your safari adventure.  We entered into the zoo and started out with the Cheetah exhibit within the African Plains section of the zoo. 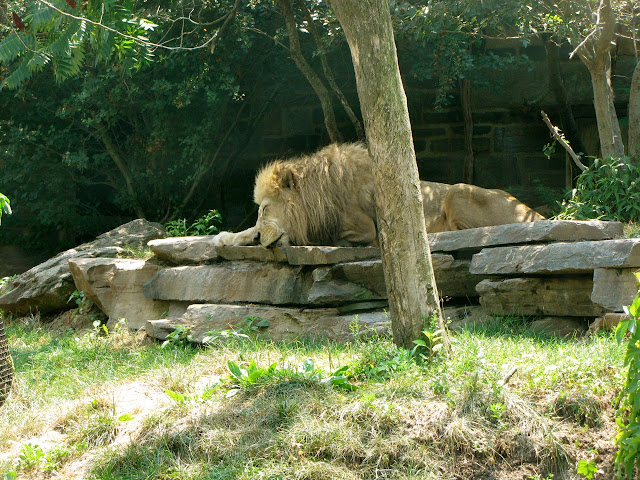 King Merlin at Rest on Pride Rock
---------------------------------------------------------
As soon as we entered the zoo it began to cloud up, which I hoped would block the sun and cool things off but the clouds brought along a light rain.  We started our loop around the exterior walkway of the park, checking out the animals as we went but the rain intensified into a downpour causing us to take refuge in a souvenir shop that was, thankfully, air-conditioned.  They were not calling for rain so I checked the radar on my phone and watched a colorful storm cell grow on the screen right over top of us that soon produced thunder, lightning, and blowing rain!  We suddenly found ourselves in the middle of the Philadelphia rain forest!  The storm raged on for about an hour and I was glad we had ducked into a store for cover because it kept Katelyn entertained and it was a place with a cool temperature to wait it out.  Eventually the storm passed and we were soon able to go outside to continue our adventure through Africa. 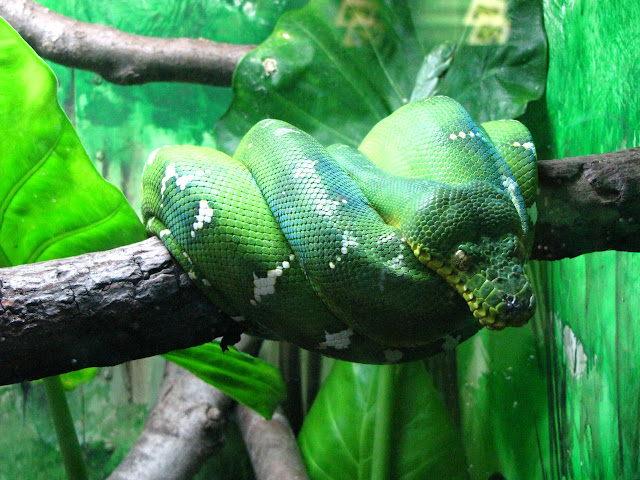 A Really Cool Green Snake
-------------------------------------------------
Rather than cool things off, the moisture from the storm created a steam bath atmosphere for most of our afternoon stay but there were many indoor exhibits of reptiles, amphibians, and primates to escape the heat.  We entered the Big Cat Falls area, one of the highlights of the zoo.  It brought back memories of when I was on a field trip in elementary school a long time ago... in a galaxy far far away, back in the early 70's.  Back in the day, the big cats were housed inside small barred cages that allowed them a little room to walk about but not much more.  They paced back and forth at a hectic pace, appearing trapped, imprisoned and restless.  I remember feeling sorry for them.  Sadly, this was probably the zoo experience practiced around the world at the time.  Thankfully, we have since learned to create captivity habitats that are much more open and remarkably similar to their natural habitats and environments. 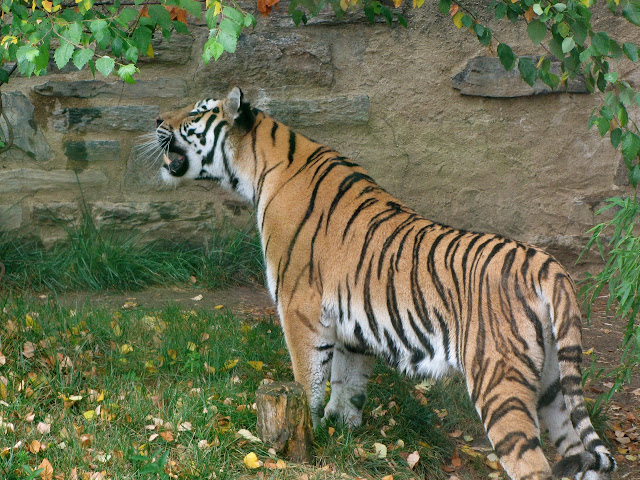 Tiger in the Big Cat Falls Exhibit
------------------------------------------------
Philadelphia Zoo's Big Cat Falls today is one such created space, with the animals needs placed at top of the list of priorities.  The big cat exhibit is an outdoor habitat that gives them a lot more room to roam about with rock outcroppings, natural vegetation, and sources of fresh water in the form of pools, streams, and waterfalls.  As you walk through the path that twists and turns from one observation point to another, you feel like you really are in Africa or Asia viewing these impressive animals.  Several points give you a close up view of the action in the form of glass partitions that allow for great photographs.  Zoo staff members were on hand at various points to answer questions about the African lions, Amur tigers, snow leopards, pumas, jaguars, and Amur leopards.  There were also several indoor stops along the route to learn more about the cats on display.  We were glad they were air-conditioned to allow us a break from the heat.  Several cats were cooling off in the water, teasing the envious overheated human onlookers! 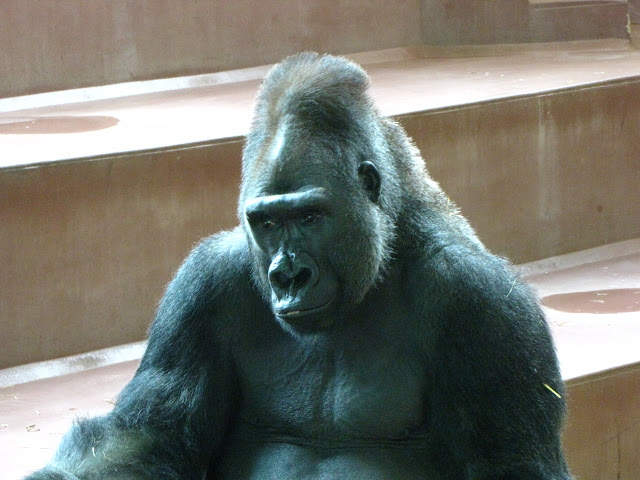 Jabral / Western Lowland Gorilla
------------------------------------------------------
Another popular attraction was the PECO Energy sponsored Primate House where various monkeys, gorillas, and orangutangs were the star of the show.  Many of the primates had access to both indoor and outdoor habitats, with indoor spaces that were four to five stories high and enclosed in glass for easy viewing of the animals.  A group of squirrel monkeys raced about the jumble of trees and various apparatus within their space to the delight of kids of all ages.  Next door, a pair of orangutangs rolled about between the large inside and outside habitat areas, while Colombian black spider monkeys flew through the air, swinging their long arms from rope to rope, simulating vines of the jungle.  One of the monkeys had just given birth to a newborn a few short weeks ago and cradled her baby with the care and concern of any protective mother.  They were perched high above the crowd of human primate onlookers, who were touched by the tender scene. 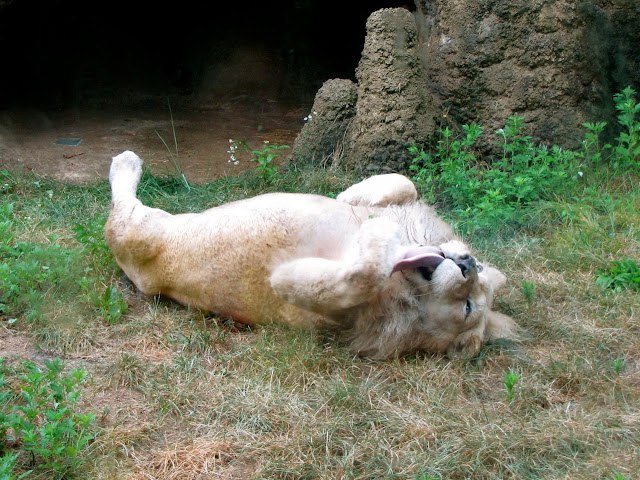 Merlin Rolling in the July Sun
----------------------------------------------
We continued our rounds from one exhibit to another and made our way to the elephant preserve, where Ben had entertained us so much during our last visit.  Unfortunately, it was closed off and was now an active construction site for a planned new children's zoo and educational center.  We found out that Ben and his friends had been relocated to another preserve where they were free to roam in a much larger area more like their natural habitat.  Ben had really been fun to watch last year as he entered a pool of water and splashed about playfully, occasionally spraying the spectators with water from his trunk.  We were hoping for a repeat performance and were more than a little disappointed with the absence of the elephants.   However, I'm sure our loss was Ben's gain as he and friends are now in a much better suited place and happier being more free to roam about in a more expansive space.  The zoo staff was hopeful that additional funding would one day become available to create an appropriate environment so the elephants could return to the zoo. 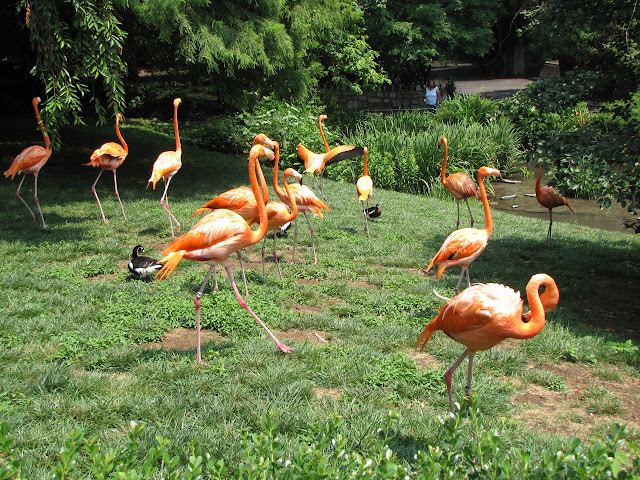 Flamingos on Parade
-------------------------------
Next we took a stroll through Bird Valley to see the flamingos, penguins, and various swans that are always beautiful to see.  Right next door was Bear Country where a polar bear appropriately named Klondike was swimming in a large pool that had once been enclosed in glass so you would watch the action from an aquarium-like vantage point.  We also saw an Asiatic Black bear ironically named Ben, who emerged from a dip in the pool.  Ben was accompanied by a Andean bear from South America named Spike, who was wrestling with a plastic barrel for fun.  It didn't look very fun for the clawed and chewed up barrel!  There were a lot of toys available to keep all the animals entertained and several used items were on display for the public to handle to see the wear and tear from the claws and jaws of the wild animals.  We then went on to see the new expanded hippo area that had once been next to the old elephant preserve.  The zebras, giraffes, rhino, antelope, and too many critters to mention flanked the path of our route. 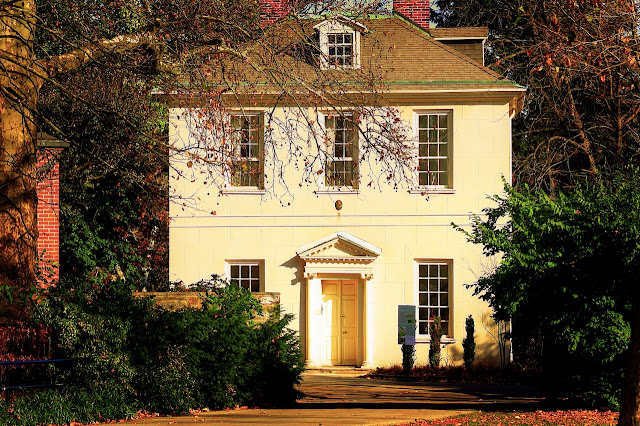 The Solitude / Home of John Penn Jr.
-------------------------------------------------------
OK, now for some history... The Philadelphia Zoo touts itself as America's oldest zoo, first charted by the State of Pennsylvania way back in 1859 but were forced to delay the official opening by fourteen years due to the American Civil War.  When it finally opened to the public on the first day of July in 1874, there were about 1,000 animals on display with an entry fee of a quarter for adults and a dime for kids.  Today over 1.3 million people visit the zoo annually to see approximately 1,300 animals, many of which are endangered from around the world.  The site of the zoo was the former home of John Penn Jr., the grandson of Pennsylvania's founder William Penn.  His Adam Style residence known as The Solitude still exists near the center of the zoo property.  Since the Bicentennial celebration in 1976, the home has been slowly going through extensive renovations and restoration projects, including an underground tunnel that led to submerged kitchen vaults.  A group called the Friends of The Solitude continue to make needed improvements with hopes to one day open the house for tours to the public. 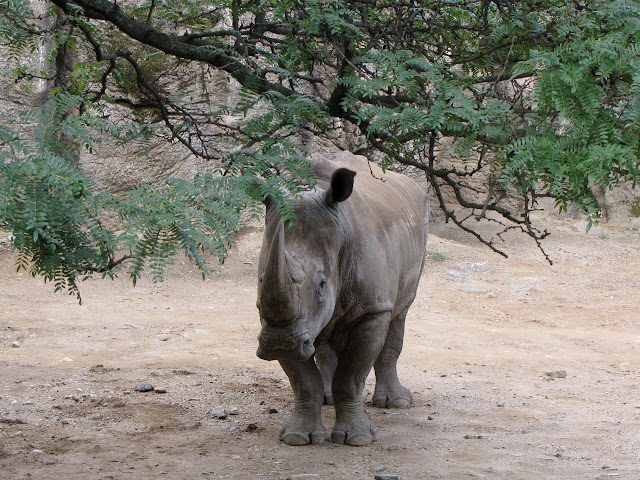 Honk your "Horn" if you Love Rhinos!
--------------------------------------------------------
Some of the architecture at the front entrance of the zoo is original to the early days of operation in the late 1800's.  Just outside the front gate is the best store of the entire zoo with a large selection of everything you could ever imagine buying at the zoo, including a monetary sponsorship of one or more of the endangered animals to help support their continual care.  You can exit the zoo by getting your hand stamped for easy re-entry but this is not an option at the south gate where we parked in the Frog Parking Lot.  Well, it was getting late and we were running out of energy anyway.  We stopped by the Big Cat Falls one more time to see the cats in action.  A black jaguar had made an appearance by playing in a creek within his section of the preserve.  The heat was finally breaking with a welcome breeze bringing a little relief.  Despite the hot and humid weather, the animals were very visible and surprisingly active throughout the mid-day hours of our visit.  Well duh, most were from Africa and used the heat... 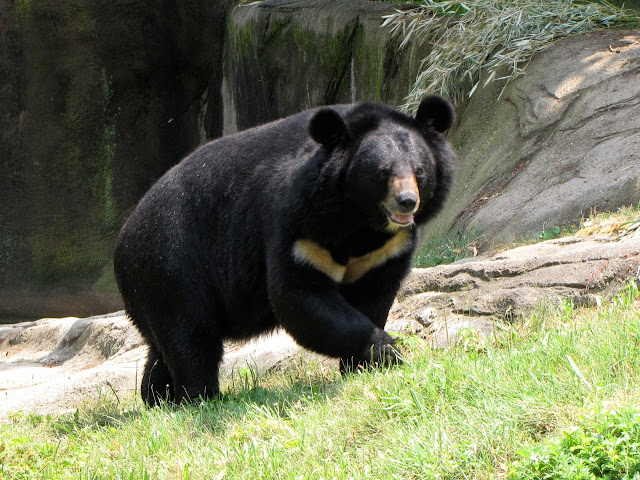 Asiatic Bear on the Prowl
--------------------------------------
The Philadelphia Zoo is a fun experience the whole family can enjoy.  It is not too big to be overwhelming or too small to lose the attention of the zookeeper wanna be in the crowd.  You can see everything in one day with plenty of time to revisit favorites and take breaks to cool off for a few minutes.  If summer zoo visits are not your thing, they are open year-round with the exception of major holidays.  Zebras in the snow?   Just as out of place as the penguins and polar bear seemed without winter's ice... Just didn't seem right.  I guess the zoo has something to offer in every season, which keeps people coming back and visiting year round.  We will definitely be back again! 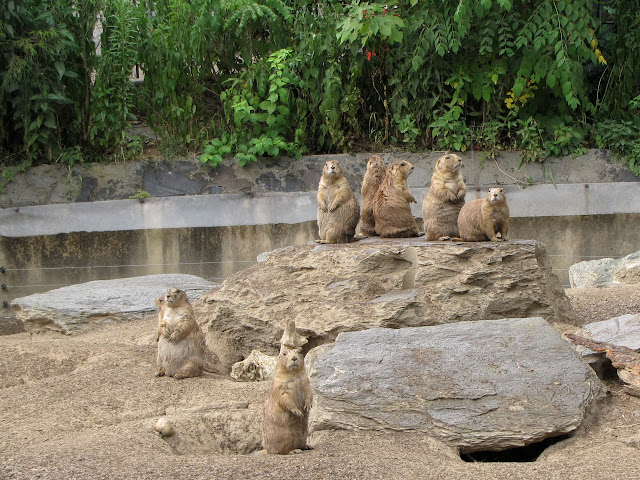 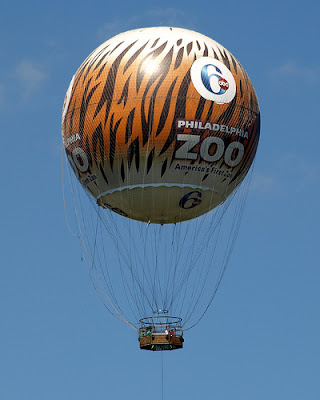