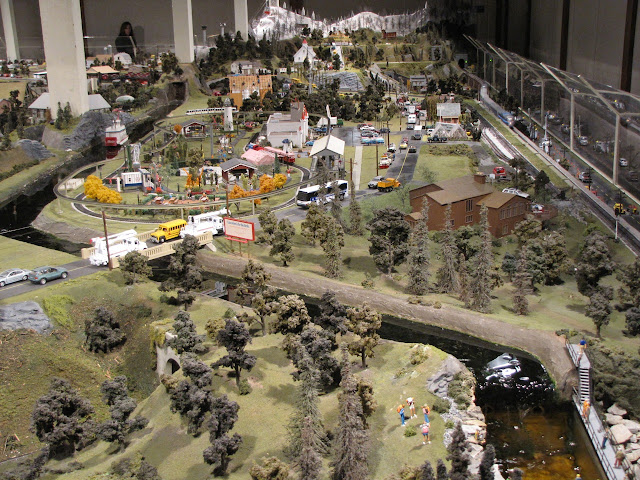 Recreated Conestoga Creek
-----------------------------------------
Ever since I was a little kid, I have loved model trains.  The best Christmas gift I ever received was a train set that was up and running around our dining room table one memorable year.  The Santa Fe set was complete with several buildings and accompanying scenery.  It was hard to leave the scene to go open my other presents... I must have been a very good boy that year.  Over the years my father, brother, and I took it up as a hobby, creating a two train layout mounted to a large sheet of plywood in our basement.  It is an expensive hobby and items were added sparingly over the years.  I loved going to several hobby shops and exploring the model train aisles with my dad to check out building kits, train cars, and accessories.  You were only limited by your imagination and wallet! 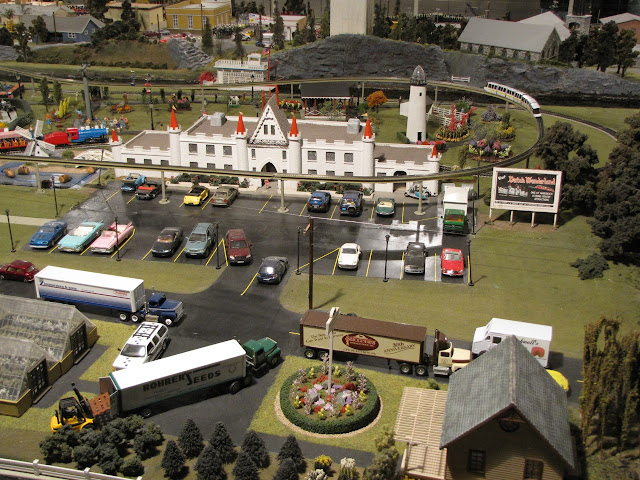 Dutch Wonderland Model Display
-------------------------------------------------
Over the years I have continued to dabble in model trains and set up a layout of my own under our family Christmas tree every year as a tradition.  Some of my favorite historical engines and cars are on display in my classroom for my students to see.  Every year when I get to the Transportation Revolution in Chapter 12 in my curriculum, I set up a small circular running layout in my classroom of an HO scale model of the  Dewitt Clinton, the first steam locomotive to operate in the state of New York in 1831.  It was named for the Governor of New York who promoted the construction of rail lines and the Erie Canal to link the far reaches of his state together.  The models make great props when discussing the role of trains in western expansion across the continent.  I am fortunate to share my interest in the hobby with my friend and former teaching mentor Don Huntsinger.  Don has built several display cases for the trains in my classroom, including the Dewitt Clinton, which protects the fragile trains while being viewed by 125 eighth graders on any given day. 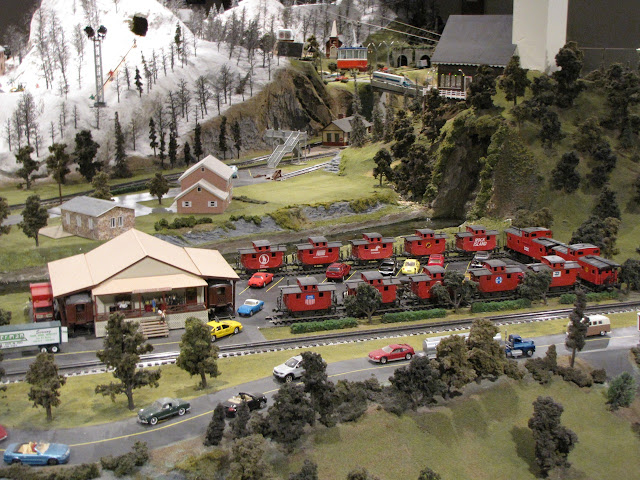 Red Caboose Motel Model Display
-------------------------------------------------
Living in Lancaster County we are fortunate to live so close to the Strasburg Railroad and multiple accompanying tourist attractions.  One of the nearby businesses close to the historic railway is the Choo Choo Barn, a model train display and supporting shops including a hobby store specializing in model trains.  I passed by the hard to miss sign of the Choo Choo Barn several times over the years not really realizing what it was, mistaking it something for very small children.  I was thrown off by a toy store in the complex specializing in Thomas the Tank Engine wooden train sets, that were great fun when my children were small.  They are safely packed away in storage for potential grandchildren someday... However, I'm in no hurry for that phase of my life yet!  Upon closer inspection one day during a drive-by and investigating in more depth on the internet, I thought it was something worth checking out.  Katelyn... grab your purse and... Lets Go! 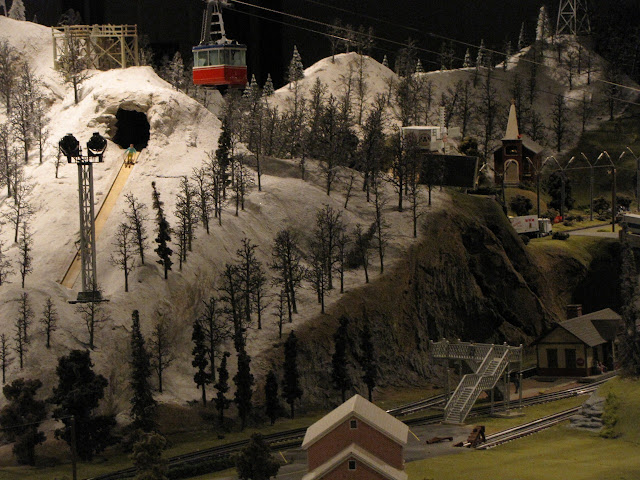 Alpine Mountain Ski Resort at Dusk
----------------------------------------------------
The story of the Choo Choo Barn started in the basement of George Groff with a simple Lionel train set that was a Christmas present in 1945 for his young son... Sound familiar?  Over the years, the train set evolved and expanded, taking on a life of its own and taking over the basement of his home.  Soon friends, neighbors, and complete strangers heard about the elaborate train layout and wanted to see it for themselves.  The family home became a traditional Christmas visit for many who wanted to see what was added to the display in the past year.  Looking for a way to pay for his kids' college education, Mr. Groff saw a barn-like building become available just down the road from the newly opened historic Strasburg Railroad.  He thought it might be a small business opportunity, capitalizing on the traffic flow that traveled along Route 741 on their way to visit the railroad.  So on Thanksgiving Day in 1961, the Choo Choo Barn opened for business and has been in continuous operation ever since. 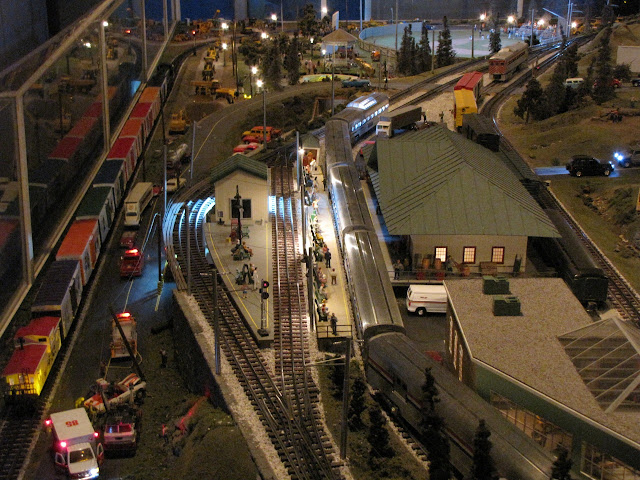 Busy Amtrak Station at Night
-------------------------------------------
The popularity of George Groff's train display grew as the layout continued to expand year by year.  After he retired in 1979, his youngest son Thomas took over the business and along with his wife, became the new owners.  Over time, several spin-off businesses were created to compliment the Choo Choo Barn's success, including the Strasburg Train Shop where people can purchase high quality items to build their own detailed model train display.  However, it can still be an expensive pastime, so proceed with caution!  Shops continued to be added into what became known as Shops of Traintown, which has grown to include Railroad Books and Videos, Thomas Track-side Station, Candy Junction, Country Keepsakes, and an Issac's Restaurant.  See what can happen when you purchase a single little train set and add it with Location... Location... Location... 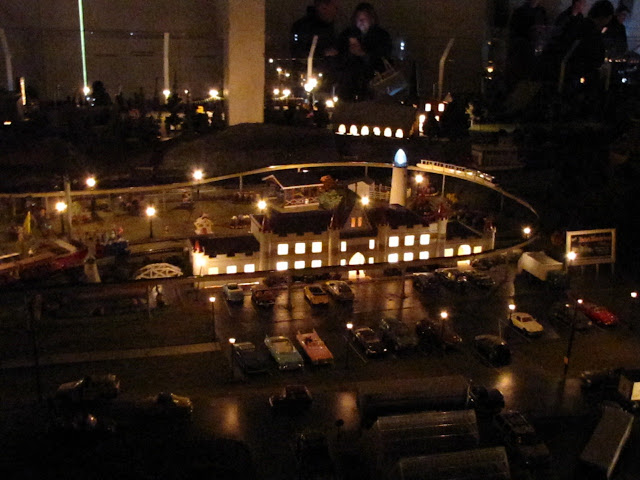 Dutch Wonderland at Night
----------------------------------------
When it first opened, the original Choo Choo Barn model train display had six trains running along track covering 600 square feet of space with six moving animated figures.  Today the layout has expanded to cover over 1700 square feet of space, 22 trains, and 150 moving figures... many of which you can control yourself with activation buttons.  Katelyn and I entered the display through a curtain doorway and were blown away by the active display that seemed more like a miniature world in high gear.  The space was tight with action and I don't think you could fit another square foot of train layout anywhere in the room.  It was fairly compact but there was so much to see, it was hard to leave your observation spot for fear of missing something.  Thankfully, you could encircle the route as many times as you wanted, allowing you to see something new each time. 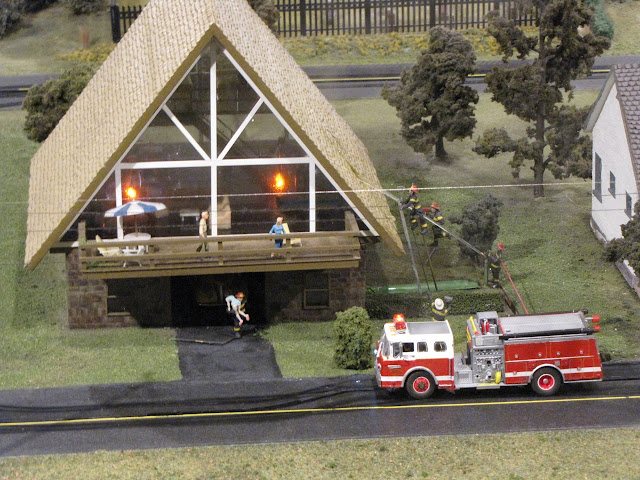 Fire Department Responds
---------------------------------------
The 150 moving figures in the form of people, animals, and vehicles were fun to find and fascinating to watch.  How did they do that?  The most complex scenario involved a house fire that broke out with bright flame and smoke.  A nearby fire station responds with the door rising up and a firetruck pulling out onto the street with lights flashing and sirens sounding.  The firetruck pulls up to the house in distress and firefighters appear to put out the fire with real water.  A ladder rises up to the roof, followed by a firefighter with an axe who climbs the ladder and chops a hole in the roof for another firefighter on the ground with a fire hose that spouts a stream of water into the hole, extinguishing the fire.  A firefighter even rescues a civilian from the home by carrying the person on his shoulder toward the fire truck.  After all was well, the firefighters and equipment disappear as the fire truck pulls back onto the road and returns to the station.  It was amazing and was repeated for the spectators every 20 minutes.  Again... How did they do that?  Amazing! 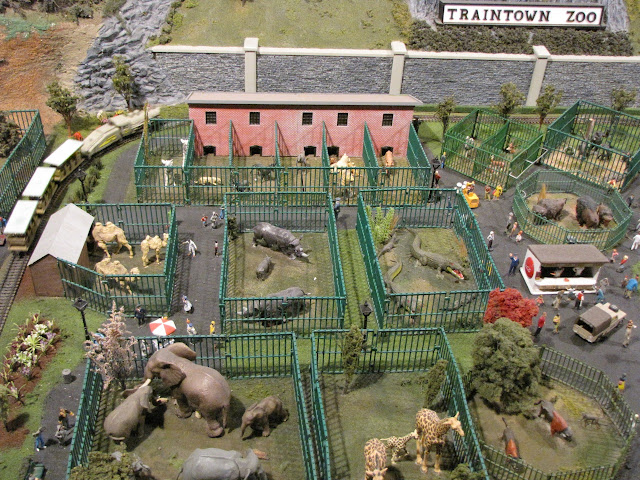 Traintown Zoo Layout
----------------------------------
There was a zoo, a full circus in town, a baseball game, a ski resort, homes being built, traffic accidents, a full town parade, and various businesses in operation.  Oh... and a lot of trains running from one end of the layout to the other.  Most of the buildings within the display were scratch built, meaning they were not constructed according to the instructions of a purchased kit, mass produced by a model company.  As a result, many of the buildings cleverly represent icon businesses within Lancaster County.  You can see the Dutch Wonderland amusement park recreated in miniature form including the working monorail.  The historic Strasburg Railroad is also present complete with historic train that runs the same route as the real thing.  The engine even switches from the front end of the cars to the back at the far end of the route for the return trip back to the station.  Every attention to detail is present. 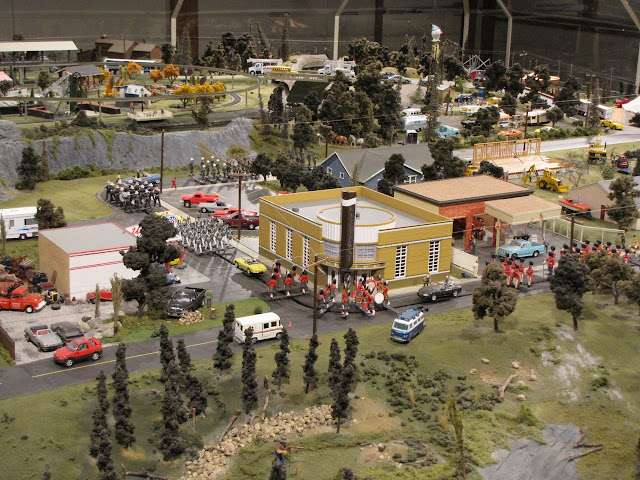 Town Parade by Theater
-------------------------------------
A short distance away, the local Red Caboose Motel, a Turkey Hill Market, and the Dutch Haven Bakery have also been recreated within the layout.  It was fun to try to discover the local businesses hidden within the arrangement and I am sure I missed a few.  The realism of the scenery was enhanced by a real stream of running water twisting throughout Traintown, even containing several waterfalls.  The display went through time changes subtlety transitioning from daytime to night where the detail of individual lights came into full view.  Katelyn and I stayed through several simulated days and nights, encircling the layout multiple times.  We were both really impressed and didn't want to leave but it was time to exit this miniature world of wonder to get something to eat!  We headed over to Issac's Restaurant and Deli to devour a Scarlet Ibis and a Blue Heron for lunch.  Yum! 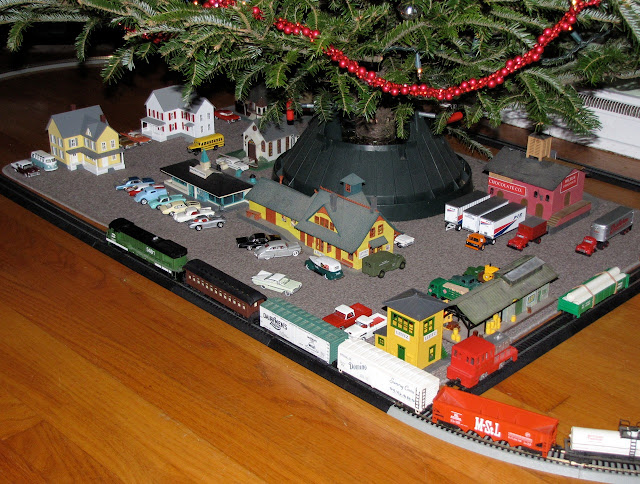 My Train Set Under the Tree
-----------------------------------------
We also payed a visit to the Strasburg Train Shop next door to purchase a few small items for my display back home.   Above is a picture of my holiday train display that has several buildings my father built almost 40 years ago.  The green and white Dairymen's League refrigerated boxcar seen above is the only surviving piece of the first train I received as a Christmas gift so many years ago.  It is my most prized possession and spends most of the year on top of my bedroom dresser protected in one of Don Huntsinger's display cases.  I bring it out of retirement every December to ride the rails one more time, bringing back fond memories.  Thanks Dad!  Occasionally one of our cats is attracted to the moving train and my own version of Traintown is attacked by a giant fur covered creature briefly resembling one of those old Godzilla movies from the 1950's...  Sound the alarm and take cover immediately! 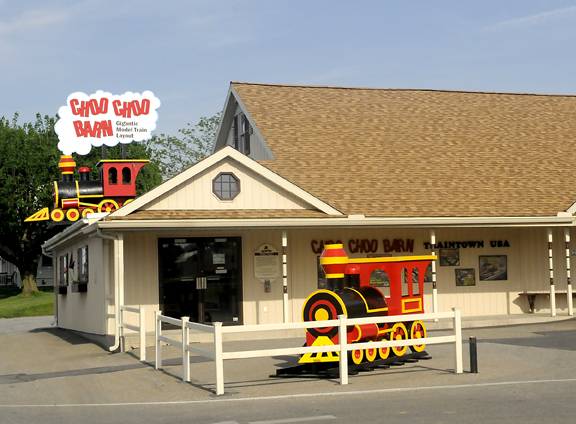 Posted by Camp Martin Travels at 11:12 AM