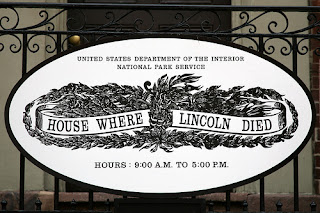 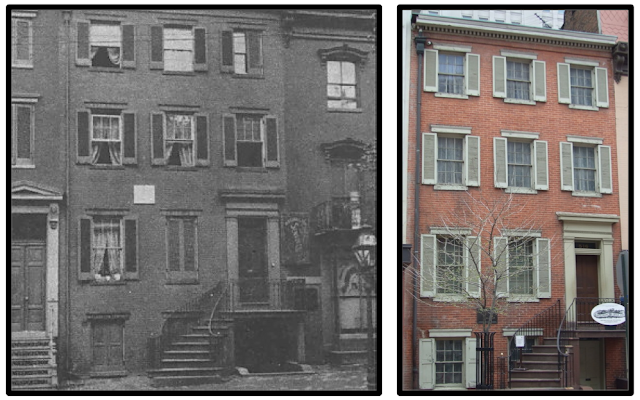 The Petersen House in 1865 / 2005
---------------------------------------------------
The audience at Ford's theater was in a state of panic, with many poring out into the confused street outside.  President Abraham Lincoln lay slumped over in his rocking chair and appeared to be asleep with his eyes closed.  He was immediately attended to by his wife Mary Todd Lincoln who could see no visible signs of injury to her husband.  The president's head was slumped over with his chin resting on his chest but there was no blood visible on his face or white shirt.  The First Lady spoke in his ear and ran her fingers across the front of his face and head but could not get him to respond.  She cradled the President's limp body in her arms as Clara Harris attended to her fiance Major Henry Rathbone, who was bleeding profusely from the deep wound in his arm.  The 1,500 members of the audience tried to piece together what had just happened and make sense of what they just witnessed.  Several people climbed up on stage and shouted questions up to the President's Box.  As the people came to comprehend that the President had been harmed, their mood turned from concern to outrage. 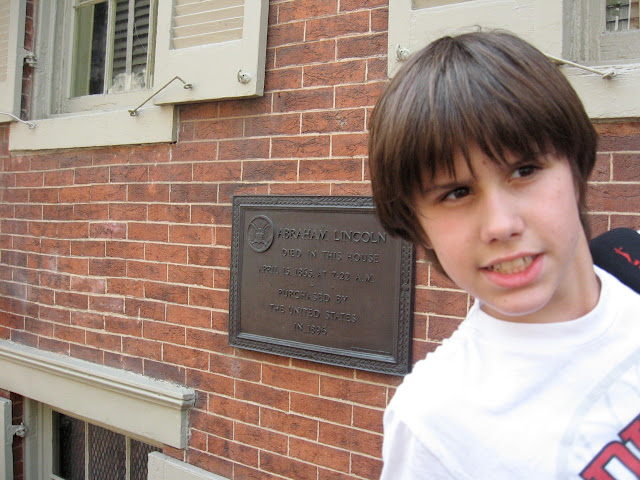 Tyler on steps of Petersen House
-----------------------------------------------
Several people had scaled the steps to the President's Box to offer assistance but found it locked from inside, barred by a music stand by Booth.  They began to pound on the door, pleading to gain access, and began to try and break through, until Rathbone managed to pry open the door.  Several men rushed into the box led by United States Army Surgeon Dr. Charles Leale who went immediately to examine President Lincoln.   He conducted a quick assessment of the President's vitals signs but could not detect a pulse.  With the help of the other men present, he had the president's body laid on his back upon the carpeted floor.  He suddenly noticed that the rear shoulder of the President's coat appeared wet with blood.  Dr. Leale had seen Booth wielding the knife on stage and assumed the president had been stabbed like Rathbone.  He cut open Lincoln's coat and shirt looking for knife wounds but could find nothing amiss.  He opened and peered into Lincoln's eyes, which revealed a serious brain injury.  He examined his head more closely and discovered wet matted hair behind his left ear.  His finger soon discovered the hole where the .44 caliber bullet had entered his head and remained lodged in the middle of his brain. 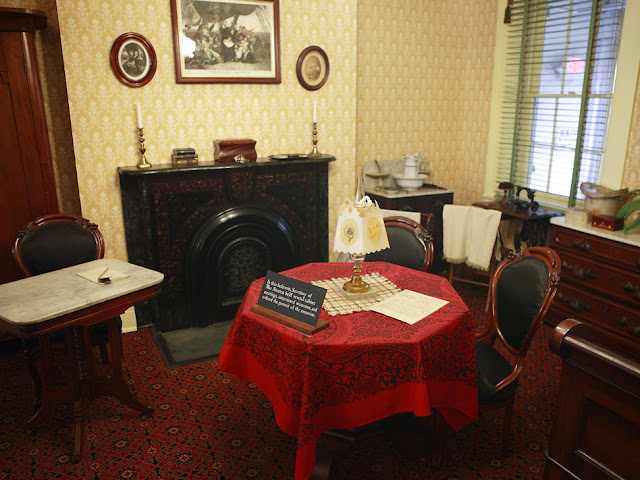 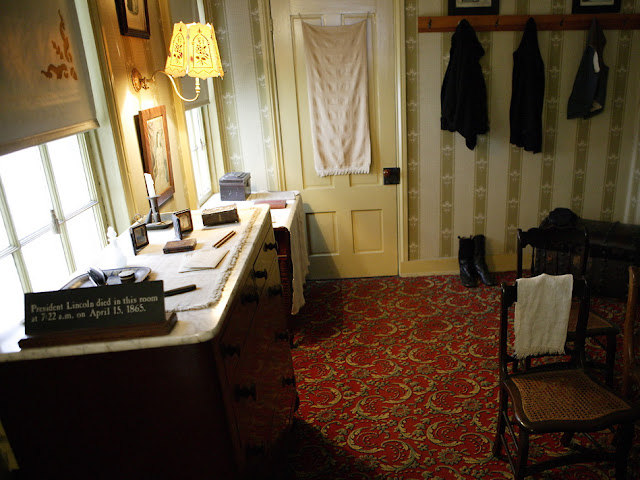 Room Where Lincoln Died
------------------------------------------
The procession carried the dying president forward into the street without aim, unsure of their destination.  Many in the crowd suggested the President should be loaded into his awaiting coach and taken back to the White House.  Dr. Leale knew he would never survive the trip and instructed the men who were carrying the President to take him inside the nearest house.  A tenant in the Petersen Boarding House had observed the scene from his first story window and opened the door urging them to bring the President inside.  The group carried the fallen President up the curved steps and into the front Parlor of the house.  From there, they carried him to the back of the house to the bedroom of a man who was out for the night and laid President Lincoln on the bed in the corner of the room.  The President was too tall to be laid strait due to the confining head and foot boards of the bed.  As a result, they placed him diagonally across the mattress, propping his head up on pillows.  Dr. Leale then cleared the room, with the exception of two other physicians to complete an extensive examination of the laboring President.   Mrs. Lincoln, accompanied by the expelled group of men, retreated to the front parlor of the house. 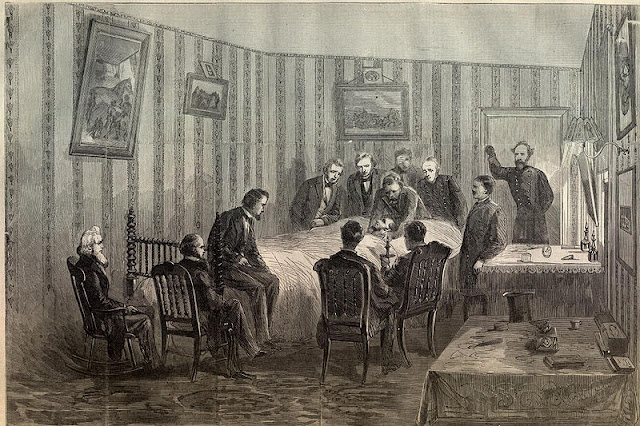 Lincoln Examination / Petersen House
(Illustration Credit / Harper's Weekly 1865)
---------------------------------------------------------------
Secretary of War Edwin Stanton had responded to the crisis at the Seward residence, where he had visited the Secretary of State just an hour before the attack.  While at the crime scene, a messenger arrived with the shocking message that President Lincoln had been shot at Ford's Theater.  Immediately, Secretary Stanton, accompanied by fellow government officials, fled toward 10th Street, with his coachman navigating through pedestrians in the crowded streets.  As they arrived on the scene, their coach could no longer penetrate the crowd and needed to walk the final distance to the steps of the guarded Petersen House.  Inside the house Dr. Leale continued to manage the scene, covering the president in blankets to keep him warm, sending for the President's son, spiritual advisor, and others to come to the house.  The examination of the president had revealed no other wounds on his body and he was stable for the moment with a regular breathing pattern.  First Lady Mary Todd Lincoln had made repeated checks on her husband, coming to his bedside, unsuccessfully attempting to get a response from her unconscious husband. 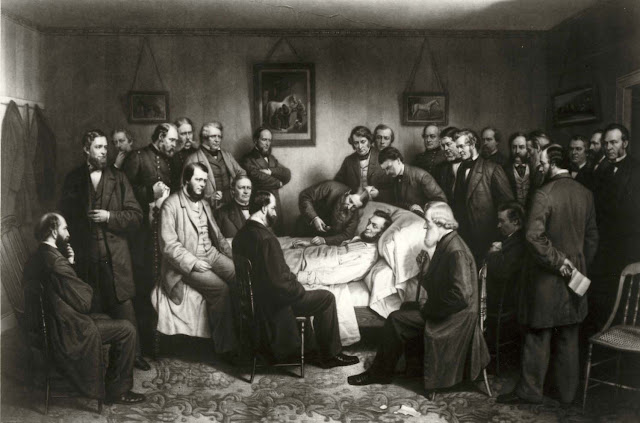 Lincoln Death Watch
(Image Credit / Library of Congress)
----------------------------------------------------
Secretary of War Edwin Stanton took control of the scene at the Petersen House, dubbing the house as the temporary Office of the War Department.  He set up a make-shift office in one of the nearby rooms and commanded that all members of the Presidential Cabinet be guarded against any other planned attacks.  He sent word to General Ulysses S. Grant, who had left Washington for Philadelphia earlier that day, to return at once to the capital.  He feared the plot may be bigger than first thought, with Confederate troops marching toward Washington to take advantage of the chaotic atmosphere of the nation's capital.  Secretary Stanton then began a hasty investigation into the two crime scenes by interviewing witnesses to the scenes.  It became quickly evident that John Wilkes Booth was a person of interest, as his name was mentioned again and again, connected with the event at Ford's Theater.  Vice President Andrew Johnson arrived at the Petersen House but allowed Secretary Stanton to continue his command of the unfolding situation.  As doctors continued to monitor the President's vital signs, a massive manhunt began for the assassins in all directions. 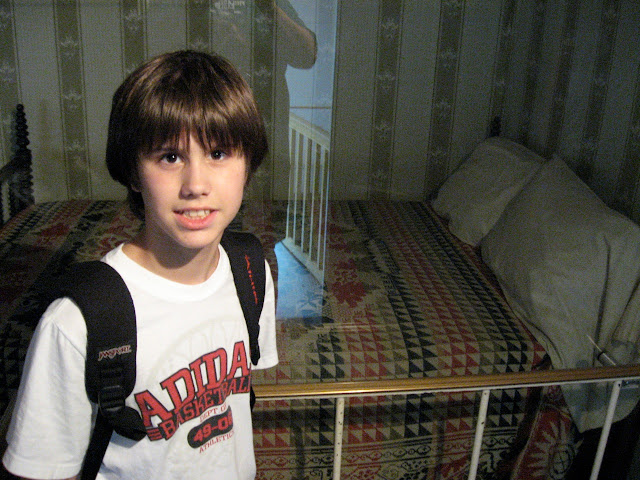 Lincoln's Preserved Death Bed
----------------------------------------------
Throughout the night President Lincoln flirted with death as the doctors continued to monitor his heartbeat and breathing.  Finally, at 7:22 the next morning, Lincoln took his last breath and his life expired in the boarding house bed as the morning sun flooded the room with light.  Secretary of War Edwin Stanton eloquently stated, "He now belongs to the ages."  Mary Todd Lincoln was not able to raise her emotional strength to enter the room to see the dead body of her husband and exited the house for her coach.  The men in the room began to make the arrangements for the President's body to be returned to the White House.  Soon a farm wagon arrived with a simple pine box coffin to transport the fallen president.  The coffin was carried into the house and later exited down onto 10th Street covered by an American Flag.  The procession back to the White House was solemn and quiet as spectators mourned along the route.  The small back bedroom where Lincoln died was now empty and the house quiet. 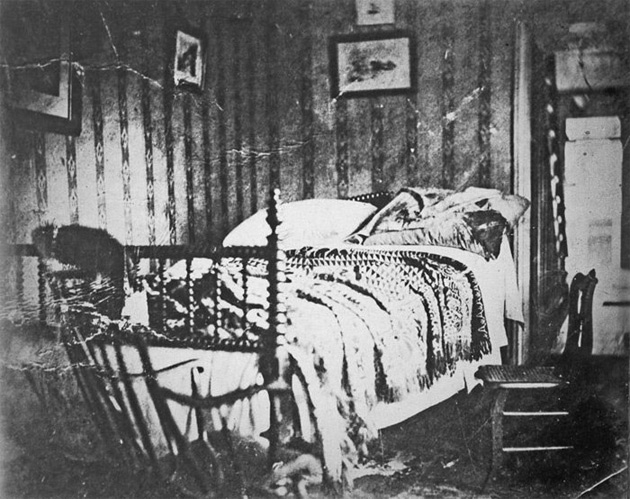 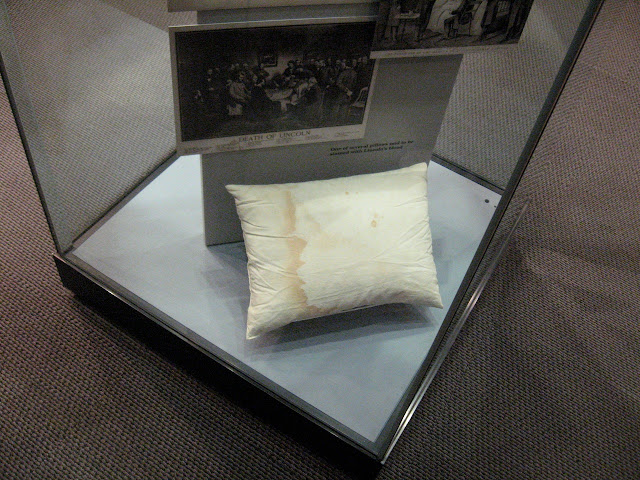 Lincoln's Blood Stained Pillow
----------------------------------------------
It is a shame that all the items from that tragic night could not be recovered from private collections and returned to the Petersen House and Ford's Theater where they belong.  The upholstered rocking chair that Lincoln was sitting in at Ford's theater when he was shot is on display at the Henry Ford Museum in Detroit, Michigan.  The President's blood stained gloves reside at the Abraham Lincoln Presidential Library Museum in Springfield, Illinois.  The carriage the president and his guests rode in to attend the play at the theater can be viewed at the Studebaker National Museum in South Bend, Indiana.  The stove pipe top hat he wore to the theater is at the Smithsonian Museum of American History and the items he had in his pockets that night are stored at the Library of Congress.   Museums are not willing to give up their treasured artifacts from the assassination because they are a huge draw, attracting visitation to view their collections.  It's worth the price of admission just to see something associated with the first President of the United States assassinated in American history.  Solemn tokens of tribute to a great man who lost his life to a despicable act of pure cowardice... 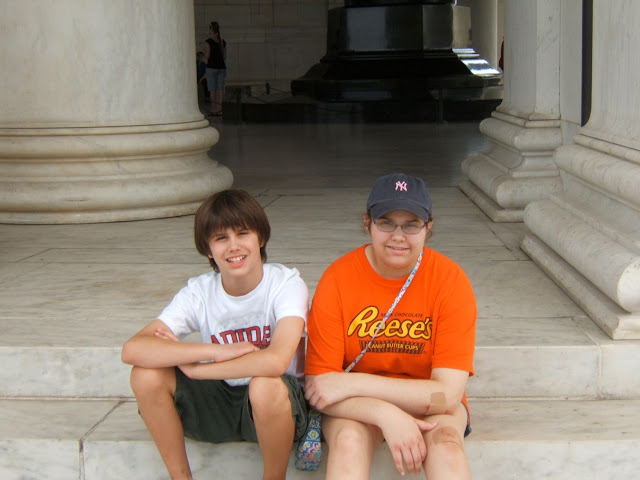 Tyler and Katelyn in D.C. / 2004
----------------------------------------------
We traveled to Washington D.C. several times as a family and really enjoyed our experience, probably the best family vacation we have ever taken.  We stayed at the Grand Hyatt Hotel located on "H" Street within easy walking distance to multiple attractions and the metro.  During one afternoon of our trip, Tyler and I were able to go off on our own to explore, while the girls did their own thing.  We ended up on 10th Street and were able to tour Ford's Theater and the Petersen House, which we both enjoyed very much.  I was surprised by the various artifacts on display in the basement museum of the theater, from the assassination to the conspirator's execution.  Both sites have since gone through extensive renovations in preparation for Lincoln's 200th birthday celebration.  I have not been back to see the improvements but it is "tops" on my list for my next trip to the nation's capital. 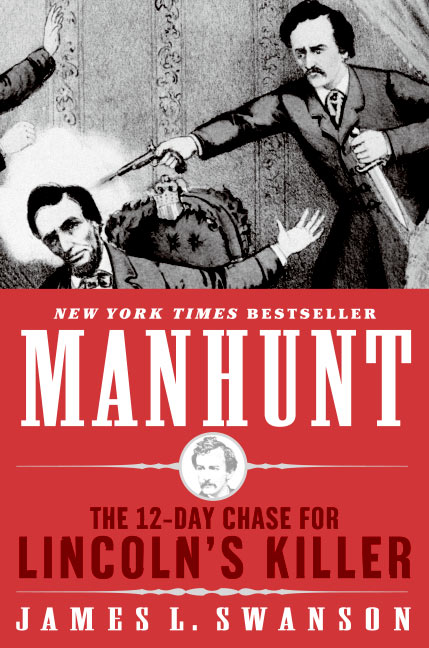 I relied heavily on this book when writing the three blog postings on the Lincoln assassination and highly recommend it as one of the best history books I have ever read.  Continue to follow the unfolding story of the chase for the assassin conspirators by reading this excellent book!