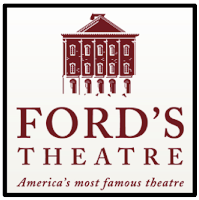 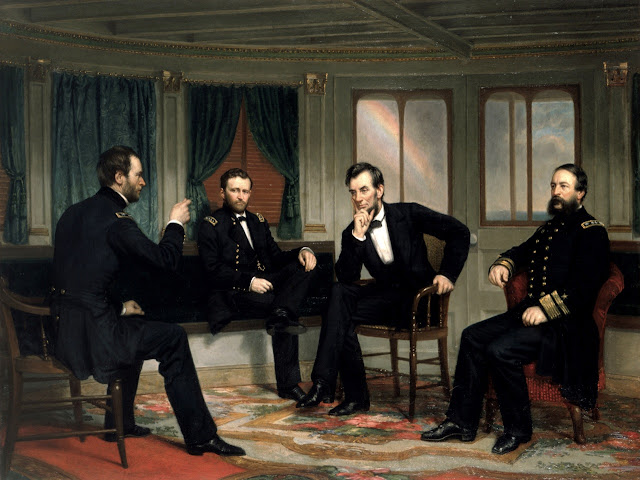 On Good Friday April, 14, 1865, President Abraham Lincoln was in a mood of especially good humor.  General Robert E. Lee had surrendered the Army of Northern Virginia to Northern forces at Appomattox Court House, Virginia a few days earlier.  The war was coming to an end and the president was in the mood to celebrate by going to the theater, one of his favorite pastimes.   He often enjoyed the company of friends on such occasions but had a difficult time finding companions available for an evening of entertainment.  Oddly, many requested guests were unable to attend that evening until Major General Henry Rathbone and his finance Miss Clara Harris accepted the president's invitation.  The play at Ford's Theater that night was a popular British comedy entitled Our American Cousin, starring Harry Hawk.  The play was about an uncivilized American who returns to England to claim his family's estate from his refined aristocratic English relatives.  The President, accompanied by his wife and guests, arrived at the theater and were escorted to the President's Box, named in honor of President George Washington.  A portrait of the first president hung outside the box facing the stage, accented with American flag banners. 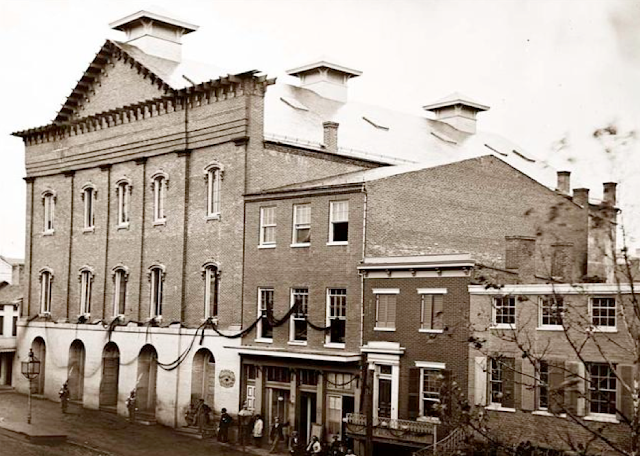 Ford's Theater Draped in Black
(Photo Credit / Library of Congress)
-----------------------------------------------------
The previous day, actor John Wilkes Booth had stood in the crowd outside the White House as President Lincoln gave a speech concerning his intention to give former slaves the right to vote.  The speech added to Booth's rage in the wake of the fall of his beloved Richmond to Union forces and Lee's surrender to Grant.  He stopped in at Ford's Theater to check his mail, when he heard of the president's plans to attend the play that night.  He climbed the stairs and stood outside the door of the empty President's Box and bored a small hole through it with a pen knife that would allow him to view the occupants inside that night.  Booth left the theater and reacted quickly, reaching out to a group of fellow conspirators, many of whom had been involved in Booth's failed plot to kidnap the president the previous year.  They reconvened at Mary Surratt's Boarding House to plan a triple assassination of key members of the Federal Government that night.  The targets included President Abraham Lincoln, Vice President Andrew Johnson, and Secretary of State William Seward.  Booth hoped the chaos created by their actions that night would give the Confederate Government time to reorganize itself and continue the war. 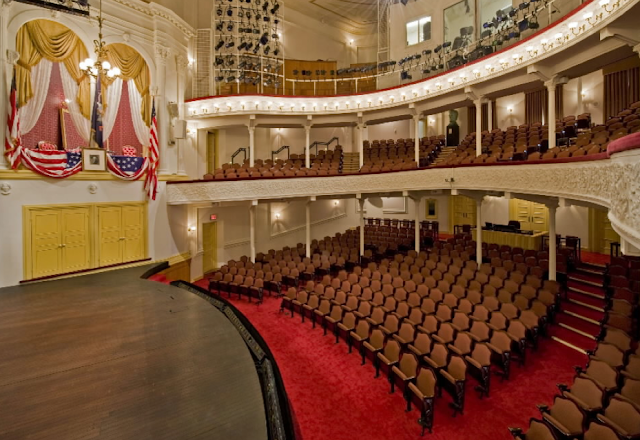 Ford's Theater Interior / Stage
-------------------------------------------------
Around 10PM, Booth returned alone to the rear of Ford's Theater on a rented bay mare and instructed a kid, who worked at the theater named John Peanut, to hold his mount in the alley until he returned in a few minutes.  Booth had acted in the theater many times and was very familiar with the layout.  He had also performed in the play Our American Cousin and knew the lines by heart.  The timing of an outburst of laughter from the audience from a specific line in the play would coincide with Booth's pull of the trigger.  The loud laughter would help muffle the sound of the single shot .44 caliber Philadelphia Derringer he carried in his coat for the task.  Booth's choice of weapon matched his flair for the dramatic in the final role he was about to play upon the stage of the world.  He could have carried a six shot revolver for his task but he was always the actor working his beloved stagecraft. 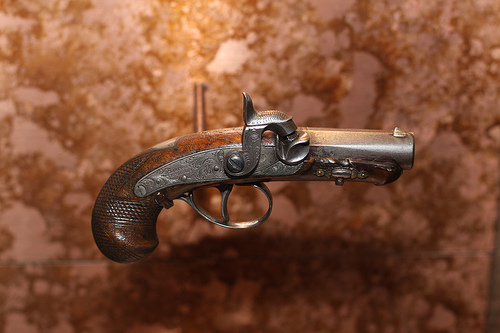 Booth's Philadelphia Derringer
----------------------------------------------
The single shot Derringer had a tendency to misfire and only gave Booth one chance with a single bullet.  He did not carry spare ammunition since it would take more than half a minute to reload.  Instead, he carried a large dagger knife concealed in his coat as a backup weapon.  Booth did not want to be seen by the audience so he made his way under the backstage area through a trap door that led to a long passageway all the way to the front of the theater.  He exited the passageway and entered the Star Saloon, where the bartender who knew him well, poured him his regular shot of whiskey.  He downed the drink and soon entered Ford's Theater and then scaled the steps up to the landing outside the President's Box, which he found unguarded.  Ironically, the single bodyguard assigned to the President that night had abandoned his post during the play's intermission to get a drink at the Star Saloon next door and had yet to return. 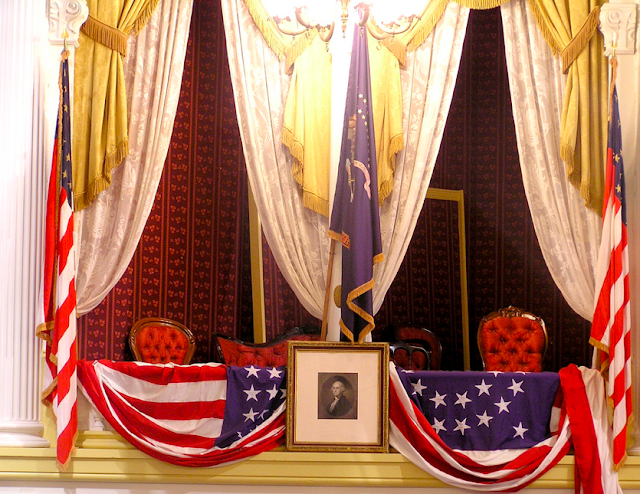 The Presidential Box / Ford's Theater
------------------------------------------------------
Booth stared through the small peephole upon the occupants backs and followed the lines of the play in his head coming from the stage below.  As the line he had been waiting for approached, he placed his hand on the doorknob and opened the door slightly to bring his target into full view.  President Lincoln was seated to his far left and the attention of all four occupants was focused on the action below.   He recited the line of the play with the actor on stage and waited for the reaction of loud laughter to the punchline from the audience to make history.   He slipped into the box without detection, stood directly behind the president in the shadows, took careful aim at the back of his head, and pulled the trigger as loud laughter consumed the four corners of the theater. 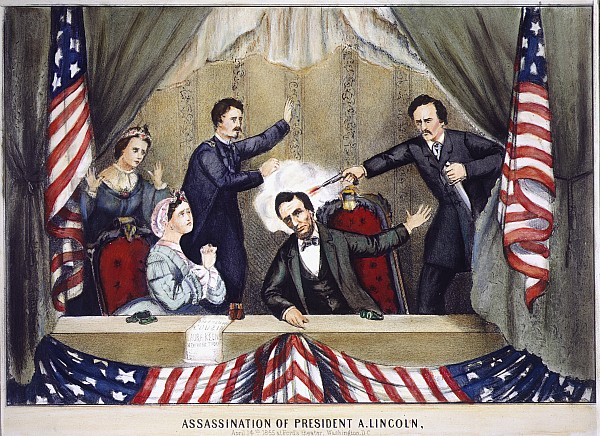 Assassination of President Lincoln
(Lithograph Credit / The Granger Collection)
-------------------------------------------------------------
The Derringer fired, filling the air with blue-grey smoke, and as it dissipated, the president's body lay slumped forward in his seat.  Major Rathbone was the first to jump to his feet and lunged at Booth, who pulled the large dagger and sank the blade deep into Rathbone's arm.   In dramatic fashion, Booth then leapt from the box, got slightly tangled in the flag decorations, and landed awkwardly on the stage below.  He faced the crowd and uttered the phrase... "Sic Semper Tyrannis," translated "Thus Always to Tyrants" and turned away from the audience, uttering... "The South is Avenged!"  Booth hobbled from the stage with a small broken bone just above his left ankle and disappeared into darkness behind the stage curtain. 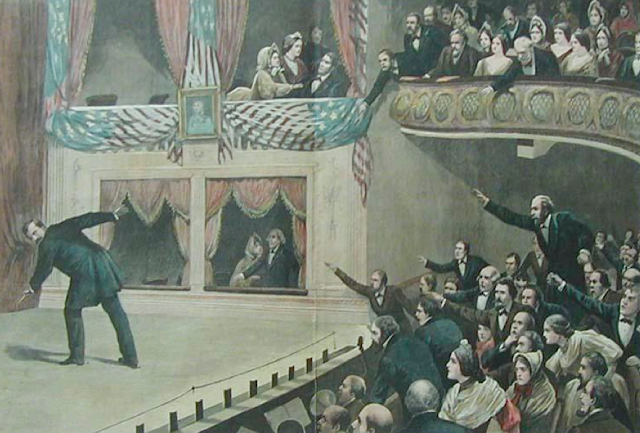 Assassination of President Lincoln
(Illustration Credit / National Archives)
---------------------------------------------------------
The crowd was slowly coming into consciousness as to what had really happened.  First Lady, Mary Todd Lincoln, began screaming in terror from the President's Box and she was soon matched by members of the audience in panic.  On his way to the back door, Booth was confronted by conductor William Withers Jr, whom Booth stabbed twice in the shoulder and neck.   He shoved him aside as he exited the back door into the alley.  Booth was pleased his bay mare was still being attended by stage worker John Peanut.  He grabbed the reigns of his horse from young Peanut, hit him hard on the forehead with the butt of his knife, and kicked him with force to separate his grasp of the reigns as he rode away with haste from the scene.  Several audience members had appeared in the alley and ran in pursuit after Booth without success.  Booth's horse disappeared from view as it galloped around the corner into the darkness of night. 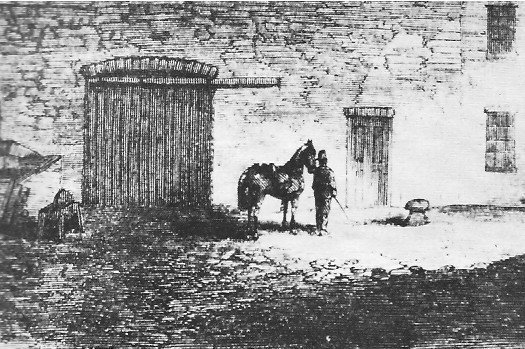 John Peanut Hold's Booth's Horse
(Illustration Credit / Leslie's Illustrated Newspaper)
-------------------------------------------------------------------------
Booth disappeared from view, veering from one alley to another, exiting onto "F" Street and rode toward the Navy Yard Bridge, where he hoped to meet up with fellow co-conspirators before descending south into Maryland.  However, there was no one present at the rendezvous point and he decided to cross the bridge alone before the spreading news could catch up to his location.  As soon as the news would reach the bridges leading out of the city that were guarded by Union soldiers, they would all be closed immediately, trapping him in Washington.  He crossed the bridge without suspicion and turned back to take one last view of the city behind him.  Suddenly fellow conspirator David Herold came into view on his horse and crossed the bridge to join Booth in his escape.  They headed for the Surratt Tavern in Clinton, Maryland where additional weapons had been allegedly hidden earlier by Mary Surratt and her son John.  The manhunt for the pair ended 12 days later at Garrett's tobacco barn in Virginia, with Herold surrendering and Booth being killed by federal troops.  The South never embraced the assassin of President Lincoln. 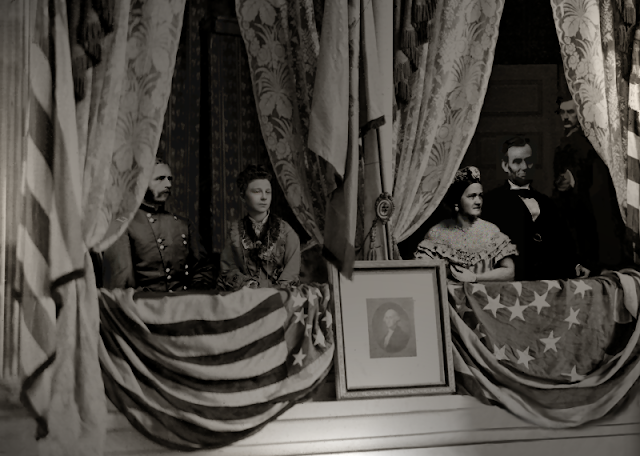 Recreated Photo / 10:15 PM / April 14, 1865
(Software Photo Credit / Lincoln Box / Steve Woolf)
-----------------------------------------------------------------------
Following the death of President Lincoln, Secretary of War Edwin Stanton ordered the theater be permanently closed and granted Congress the authority to pay the owner $100,000 to secure the property so that it would never again be used as an environment for public amusement.  The theater became a multiple-use space for the War Department until part of the building collapsed in 1892 killing 22 people and injuring another 68 government employees.  It was repaired and used as a warehouse until 1931, when it was completely abandoned and left empty for the next 35 years.  Following decades of requests from various sources to restore the theater, Congress finally approved the funds for the site to go through a two year restoration, which was completed in 1968.  The space below the theater was converted into a museum that houses an excellent collection of artifacts including the gun used to assassinate the president, the canvas bag hoods used on the heads of the arrested conspirators during interrogations, and the diary of John Wilkes Booth, just to name a few.  Today the theater is a combined historic site with the Petersen House across the street where President Lincoln actually died.  Tune in next time as we continue visiting the sites of the planned triple assassination... 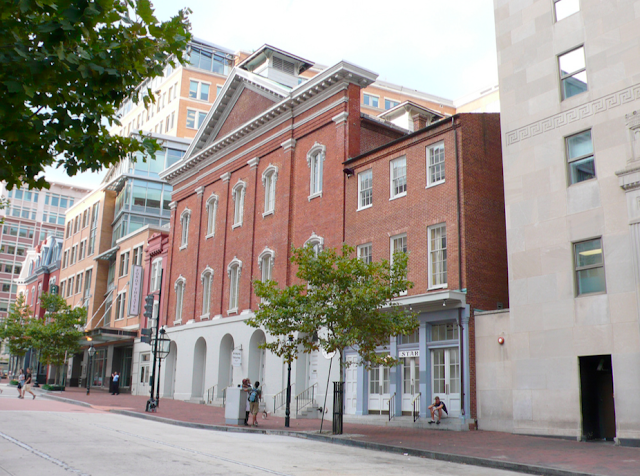 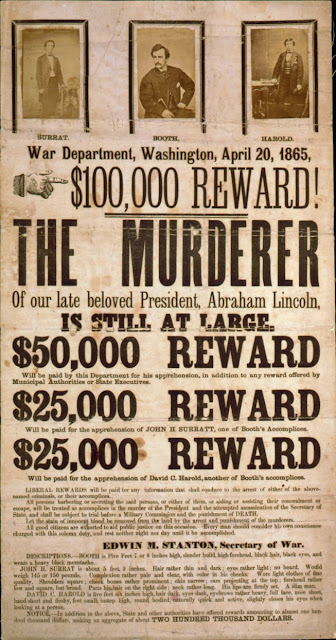