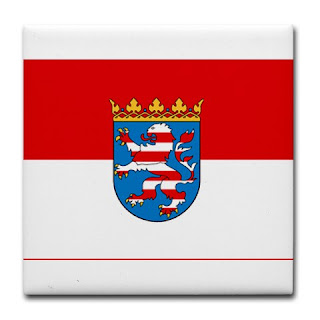 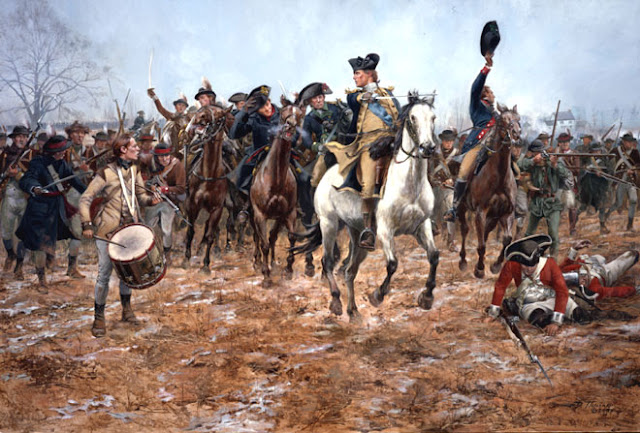 Washington at Battle of Princeton
(Painting Credit / Don Troiani)
----------------------------------------------------
General George Washington marched his Continentals toward Princeton in hopes of duplicating his recent victory at Trenton.  As dawn approached on January 3, 1777, the Continental Army approached the perimeter of Princeton, New Jersey where British and Hessian troops were stationed.  This time the attack would not be a surprise and most of the fighting would take place at several positions outside of town.  The troops advanced and retreated back and forth trying to out maneuver one another but in the end most of the British would abandon the town.  Washington captured another 300 prisoners of war, additional supplies, and artillery.  In the mean time, British General Lord Cornwallis with the bulk of the British Army had arrived in Trenton and was now on the move toward Princeton.  Washington continued to stay one step ahead of him and quickly moved on into Morristown, New Jersey to a defensible position.  He was accompanied by close to 1,000 prisoners of war captured in the past week from the previous two victories. 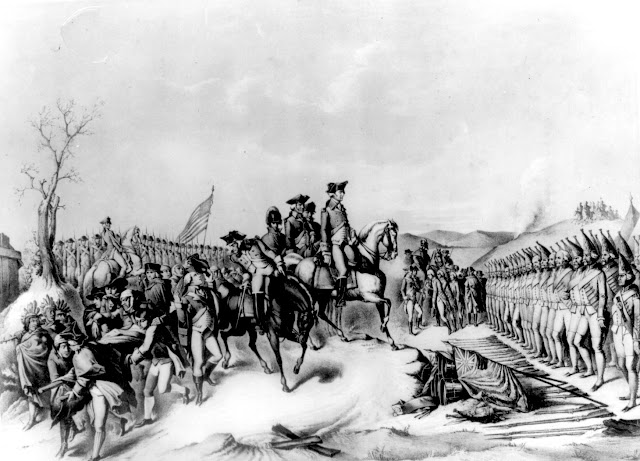 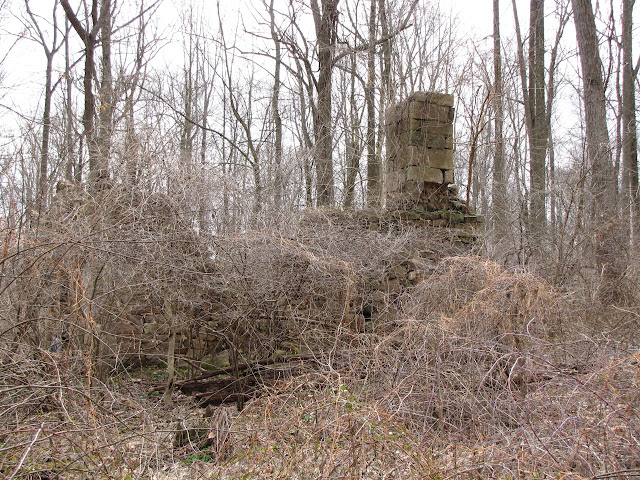 Shrouded Remains of a Colonial Home
------------------------------------------------------
It was a clear Saturday afternoon in the middle of March and the weather was free of cold rain for a change.  I headed over to meet my friend Donnie Miller and his son Payton for a historical adventure seeking answers to a local mystery.  We entered the woods off of Seglock Road in the Brunnerville area, which is a protected section of the local Pennsylvania State Game Lands.  Donnie told me that this was the best time of year to see the remains of the house since briers, vines, and weeds consumed it during spring, summer, and fall.  We hiked quite a distance; the woods was open and carpeted by the brown discarded leaves of fall; the previous week it was covered with snow.  The woods have the natural capacity to appear beautiful on any random day of the year.  We passed over several bubbling clear streams and penetrated deeper into the quiet woods with young Payton leading the way. 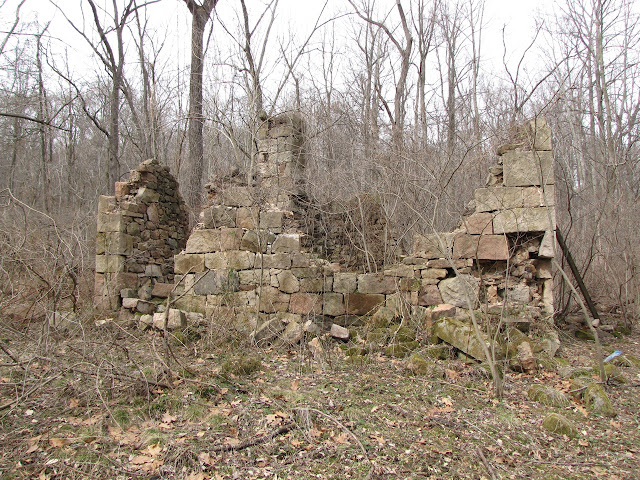 Front Door / Opposite Side View
---------------------------------------------------
After traveling almost a mile, we suddenly came upon a distant chimney rising out of the tangle of wild brush.  Even in the death of late winter, the home was barely visible and you might just walk right past it if you didn't know it was there.  The home was made of red sandstone, a common natural building material of the area.  The walls had partially collapsed in on the interior foundation as wooden support beams failed over time.  The house was abandoned at some point and probably stayed intact as long as the roof continued to keep moisture and mother nature outside.  When the roof began to leak a slow death ensued and painfully continues to this day.  Small trees were beginning to rise up through the floor putting the foundation and remaining walls in jeopardy.  It is amazing to see the determination of nature to reclaim what man has abandoned. 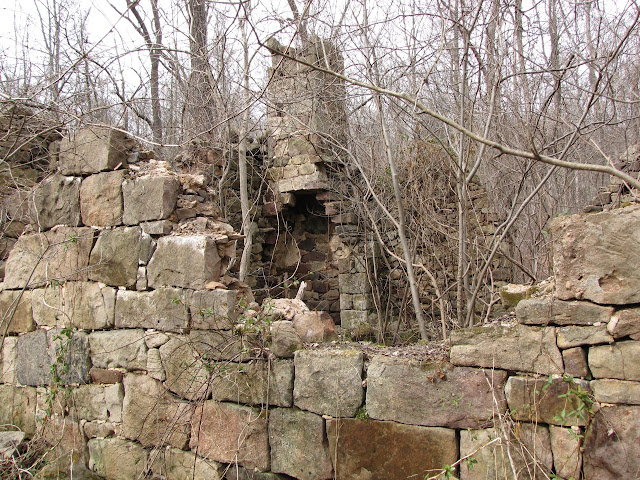 I will admit that I am not an expert on colonial homes, especially small one-room stone structures that have collapsed in the middle of the woods but...  I thought it was unique that this old house had a corner hearth and accompanying chimney.   Most colonial home's single fireplaces I have seen in my travels and studies have been centered on one of the end walls where the heat could radiate throughout the space more evenly.  In this example, the fireplace was directly across from the front door, which was also in the opposite far corner of the wall, another unique design feature.  In my experience, the doorway is usually centered or off to one side but not in the extreme corner of the structure, as seemed to be the case with this house.  The house was shrouded by mystery and we all wanted to know more. 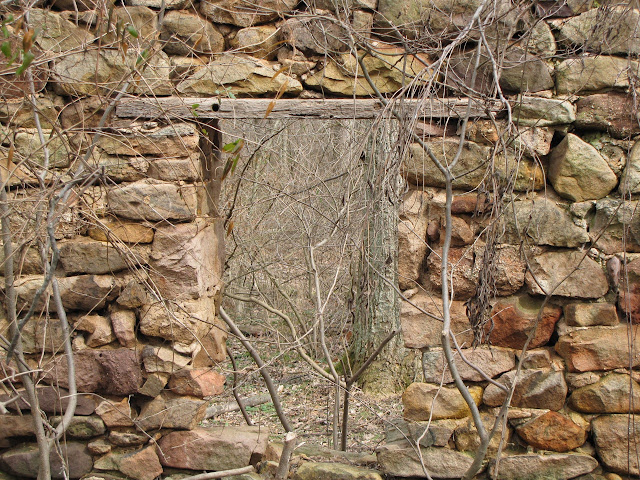 A Window In Time
-------------------------------------
Along the interior space you could detect where wooden support beams once fit snugly into the stone walls but had long since rotted away.  However, surprisingly, there was still one intact wooden beam that framed the top of the single remaining window.   Somehow it continued to support the tremendous weight of the stone wall above in a long losing battle with time that would eventually end in defeat.  It was only a matter of time before nature would take its course and the weathered beam of wood yielded, causing the wall to finally collapse in the silent forest.  Now it was time to press on to find the trench that ringed the mountain side above the mysterious house.  Within a short distance the house had once again disappeared into nature's grasp and could no longer be seen. 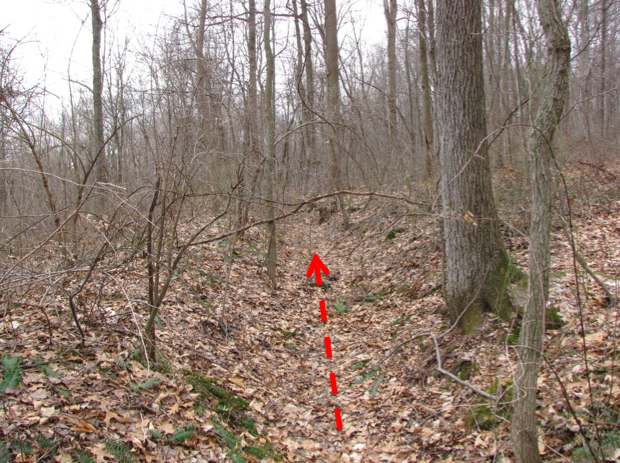 The Hessian Trench
------------------------------
We walked up the low grade hillside for quite some time and then suddenly it was there before us, the remains of a trench that had been partially filled in by mother nature.  Donnie had come across it many times walking through the woods and knew it was not something natural, always wondering what exactly it might be every time he stepped over it.  Following some research we were standing in the remains of the actual trench dug by seventy Hessian prisoners of war, captured by Washington's troops at the Battle of Trenton.  The men were traded as forced labor and dug the trench under the supervision of the Elizabeth Iron Foundry in Brickerville.  The trench was dug to run water to a new waterwheel at the foundry which would power a large bellows to blow air into the charcoal fired furnace to increase the heat and efficiency of the iron making process. 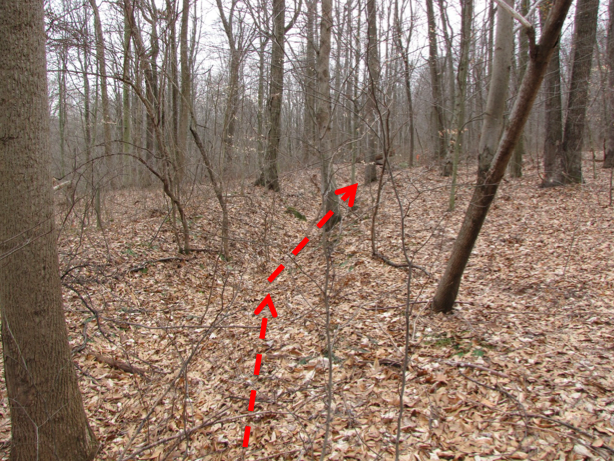 It was amazing to be standing within history connected with one of the most famous battles in American history, long since forgotten in the woods of Brickerville, Pennsylvania.  The trench was dug over a six month span of time starting in early 1777 in the depths of winter.  The trench was dug with basic hand tools and when finished was about a mile long, linking the furnace to the waters of Seglock Run around the base of Cannon Hill.  Upon completion, the mile long trench was seven feet wide and equally deep.  Now it was slowly being refilled by the seasons of time and appeared only a few feet deep with younger trees now growing tall up through the bottoms and sides of the former trench.  We walked along the path of the trench and noticed the slow but level curve around the mountainside.  Well, it was time to start heading back... Payton had a play-date planned and the clock was ticking.  We headed back down the slope toward the creek below and then back through the woods to Donnie's house. 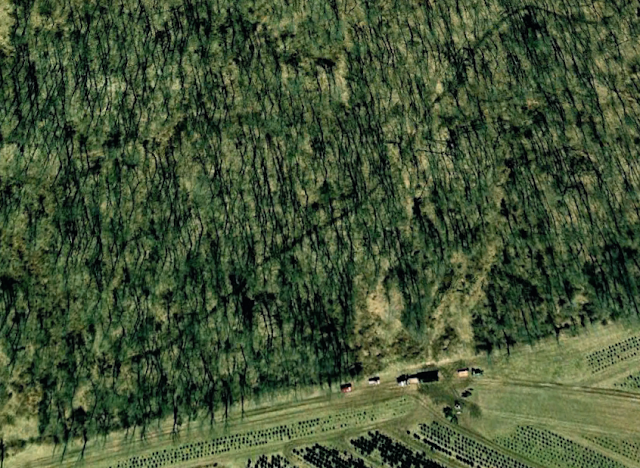 Hessian Trench from Above
(Photo Credit / Google Earth)
--------------------------------------------
Later after getting home I was able to find the trench from satellite photos using Google Earth software and had the images confirmed by several others who know the area well.  The Hessian Trench is the sloping dark line in the picture above and the northern edge of Elizabeth Christmas Tree Farm can be seen below the treeline.  As usual, I had more questions than answers.  Where did the Hessian prisoners sleep and was the decaying stone house in the woods connected in some way?  My next step was to see if my childhood memories of this of the dungeon (See Previous Blog / Part # 1) was accurate by driving down the lane off Route 501 and knocking on the door.  Hopefully, I wouldn't get shot!  The pieces could best be assembled at the site of the foundry itself and by getting answers to questions only the owners of the property might know.  Join us next time for a trip down Memory Lane...