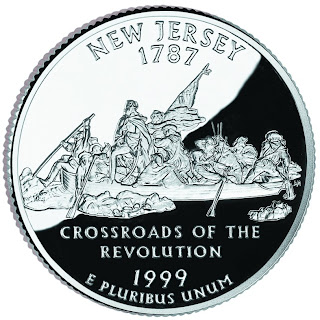 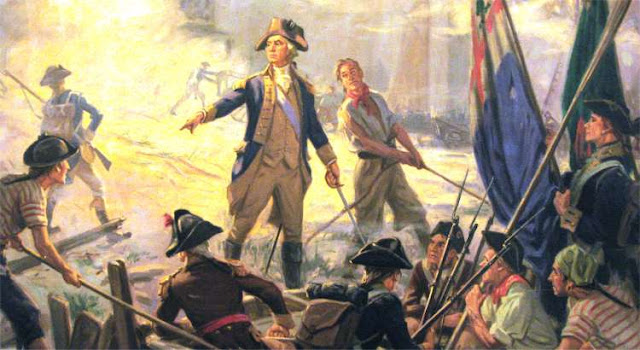 Retreat to Victory
(Painting Credit / Henry Hintermeister)
-----------------------------------------------------------
It was the winter of 1776 and General George Washington had been on the run from the British since the Continental Army had been overwhelmed by the forces of King George III at the Battle of Long Island in New York.  British General William Howe had been chasing Washington ever since and was currently stuck on the New Jersey side of the Delaware River.  Washington, with the help of another John Glover miracle, had rowed to safety on every available boat found along the eastern shore and escaped to the western side.  Washington's exhausted and provision deprived men had nowhere else to run and Howe was now patiently waiting for the river to freeze solid so he could walk his army across into Pennsylvania and end the war.  However, the greatest threat to American Independence was already looming within the Continental Camp. 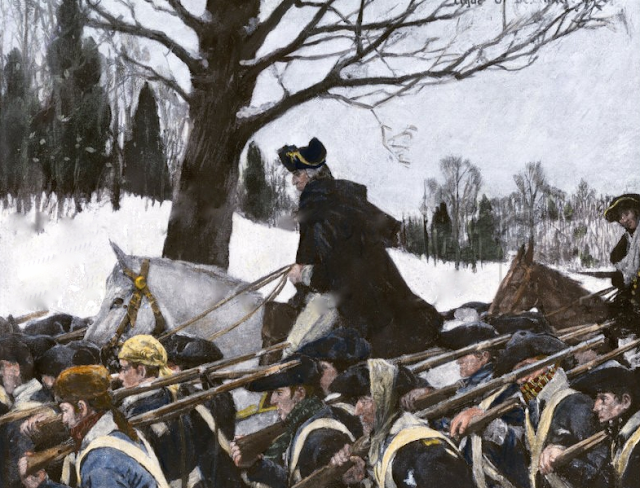 Continental Army on the Run
(Painting Credit / Title - Artist Unknown)
-----------------------------------------------------------------
To date, the war had been difficult for the Patriots with few victories and many hardships causing low morale and a loss of faith.  Many had sacrificed much to join the army and now faced the remaining winter far from home and away from their families, with the likelihood that both would face scarcity in the coming months.  The majority of the men would have their enlistment commitments expire after the first of the new year and Washington feared his army would evaporate before the British would attempt an attack.  In an act of desperation, Washington hatched a bold plan to go on the offensive.  He needed a quick victory to ward off the growing despair of his men and give them a reason to believe in the cause again.  Scouting along the western shore, he discovered the target.  A garrison of Hessian soldiers was nestled in for a long winter's nap on the other side of the river in the town of Trenton, New Jersey. 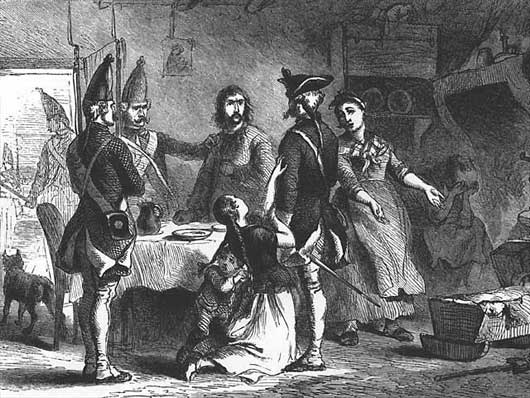 Hessians Portrayed as Mercenaries
(Image Credit / Old Barracks Museum, Trenton, NJ)
------------------------------------------------------------------------
The Hessian Army were outsiders in the war, who didn't have any stake in the outcome of the conflict.  As Britain went on the offensive in the world war, their army ran thin on troops and needed additional manpower.  England was not interested in acquiring an ally, which would require a share of the spoils when victory was achieved.  Instead, King George III diplomatically reached out to King Frederich the Great of Prussia, offering a financial contract of partnership.  Prussia was at peace and England offered to rent a portion of their idle army to assist the British in North America.  Prussia agreed to send 30,000 troops to America to fight the Continental Army for a contracted fee.  Americans despised these unwelcome visitors and Washington knew they would be easily motivated to fight them. 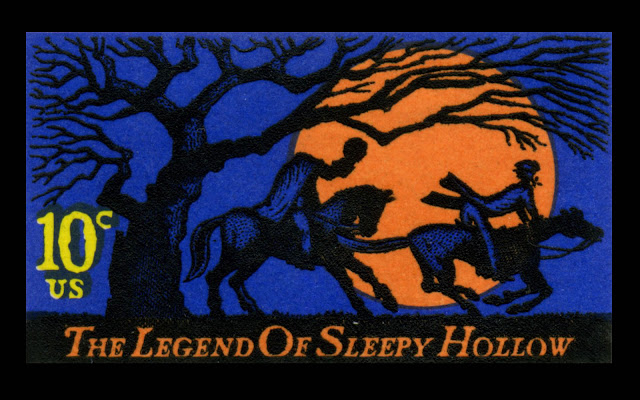 (Image Credit / U.S. Postal Service)
----------------------------------------------------
The Hessians, like many European soldiers were conscripted into service and were usually the poorest of the poor.  Under better circumstances, they may have made their way to the New World as indentured servants in search of a better life.  Instead, they were sent into a conflict that had nothing to do with their homeland and approximately 7,500 would lose their lives during the campaign.  They were portrayed as hired mercenaries but only their king benefited financially from their participation.  The soldiers continued to receive their regular low pay.  It was said that the average Hessian soldier had no idea what the war was about, which fueled the hatred of their unwanted presence.  Negative propaganda spread in their wake, including charges of ransacking towns and committing atrocities against defenseless civilians.  It is not surprising that Washington Irving chose a Hessian soldier to portray pure evil as the Headless Horseman in the Legend of Sleepy Hollow. 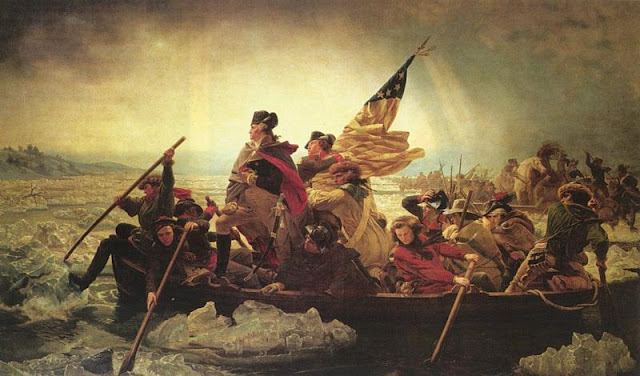 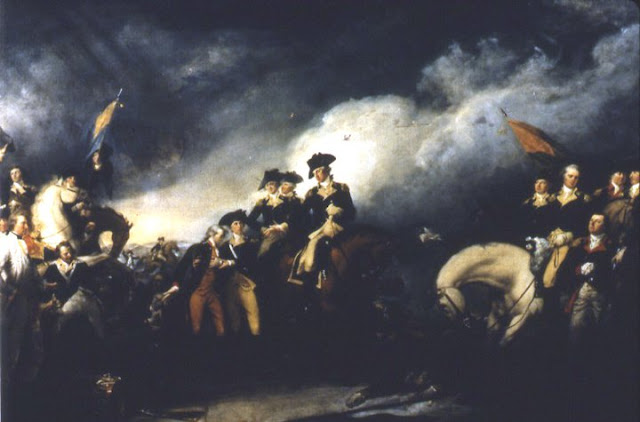 Hessian Surrender at Trenton
(Painting Credit / John Trumbull)
-------------------------------------------------
The Hessians were humiliated by the defeat with 30 men killed, including their commandant and over 900 souls taken prisoner.  Another added benefit was the stocked supplies that were secured to provide much needed provisions for the destitute Continentals.  The plan worked so well, Washington pushed on to try and repeat the action before the news of the surprise attack could beat him to nearby Princeton, where more Hessians and British Regulars were wintering in comfort.  The sequel victory at Princeton on January 2, 1777 was not as complete as Trenton but the combined effect of two quick decisive victories spread the strength of hope through the Continental Army.  As a result, most reenlisted and the cause of Independence had an army behind it to fight on for another day. 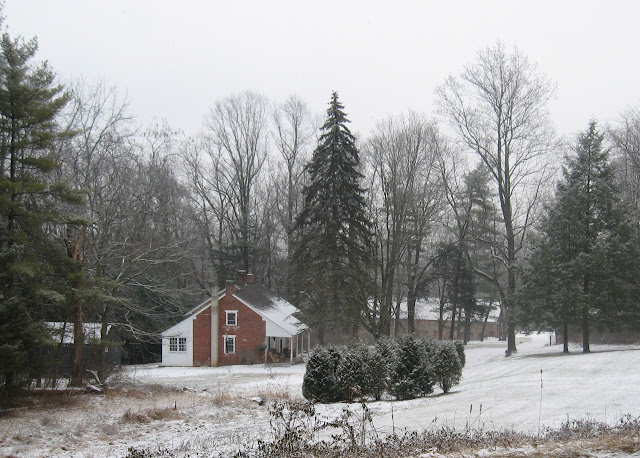 Site of a Childhood Memory
--------------------------------------------------
Flashback 35 years ago when I was about ten years of age.  I was with my friend Ron Shutter and his father who were off to visit family members living north of Lititz in nearby Lebanon, Pennsylvania.  On our way out of Lititz, we pulled off of Route 501 near Brickerville and turned down a dirt road into the woods.  We got out of the car and were surrounded by old farm buildings made of the red sandstone found in the area.  We were only there for a few minutes but I remembered this pit-stop because the man who lived on the property was showing my friend's father a dungeon or some type of prison cell.  Ron and I peered down into the dark cold space and it scared me to think people were kept in such a place.  I knew it must be haunted and filled with ghosts when darkness fell.  It is one of those vague memories that stick with you for some reason.  I am reminded of it every time I drive past that dirt road, marked by a small brick house that sits all alone, alongside the busy roadway. 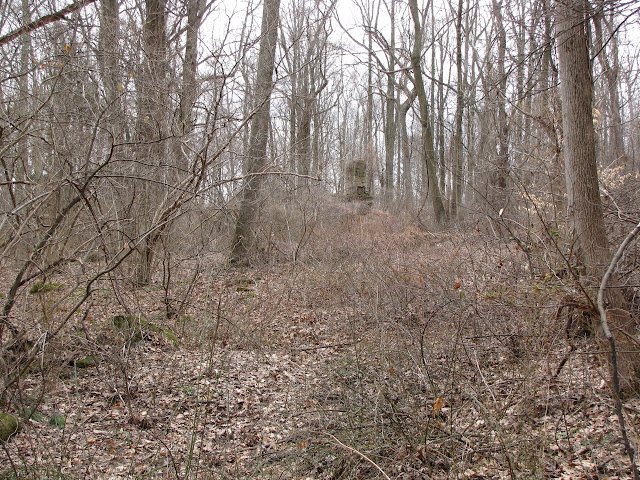 Mysterious House in the Woods
------------------------------------------------
Fast forward to March of 2011...  I was approached by my friend and fellow history teaching colleague, Don Miller, who wanted to know if I might be interested in seeing the remains of a small stone colonial era home in the middle of the woods near his home in Brickerville.  Heck yeah, that sounds like fun!  He also informed me about an irrigation trench that was apparently dug by Hessian prisoners during the American Revolution.  Now, he really had my attention!  I had never heard about a prison camp in the area before!  Might the house and the trench be connected in some way?   He also said there was a local man named David Stoddard who had conducted hiking tours of the Hessian Trench.  He listened in on a portion of one of the tours and learned some information about it but we both wanted to know more!  Check in next week when Don Miller and I go in search of more clues to connect the Battle of Trenton, New Jersey with Brickerville, Pennsylvania.