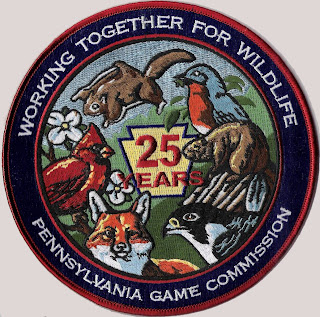 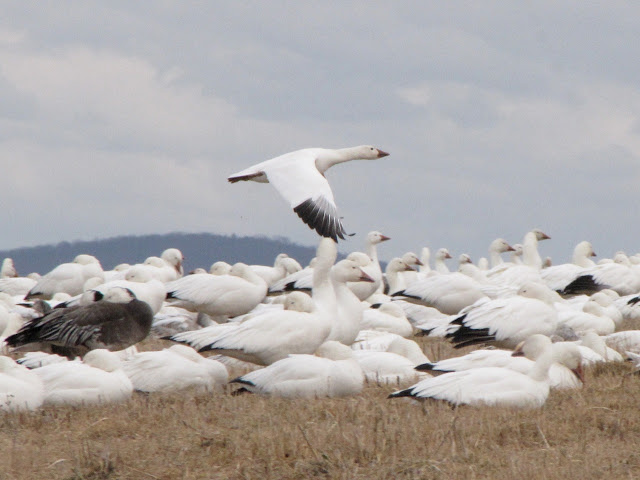 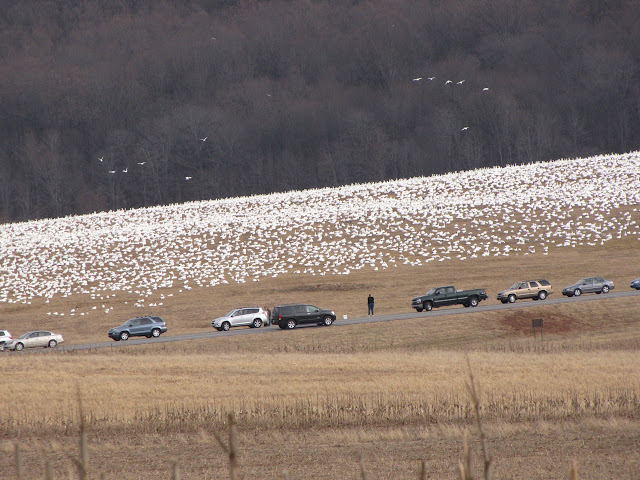 Snow Geese on Hillside
-----------------------------------------
There were many other species of birds in town, sharing space on the fields and reservoirs in segregated groups.  Birds of a feather really do flock together!  The usual Canadian geese were joined by the recent arrival of snow geese and large graceful trumpeter swans.  The migrating waterfowl usually arrive when the reservoir is mostly free of ice and the fields are free from snow.  The birds like to sleep on the water where they feel more safe and need access to the missed grains in the surrounding fields, which are difficult for them to find under the snow.  This weekend, the majority of the ice had given way with the recent arrival of warmer temperatures that had also melted the last of winter's snow.  Apparently the perfect conditions also signaled the arrival of bird watchers that had migrated from all directions far and wide to see the show. 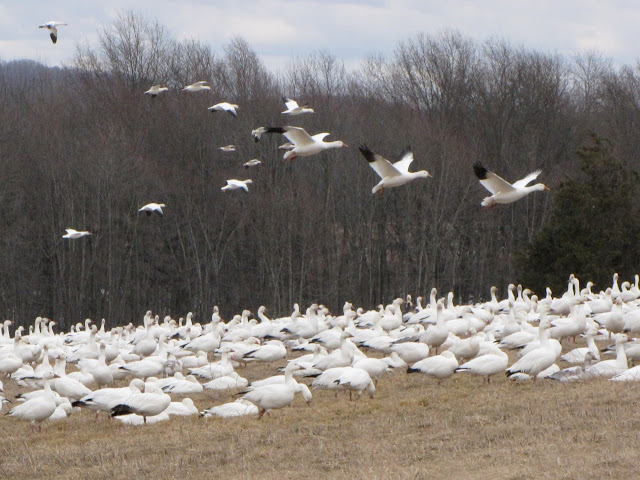 Coming in for a Landing
--------------------------------------------
We were both surprised how close we could get to the mass of snow geese who were congregating on the hillside above the large reservoir lake.  The spectators lined a fence of a single thick wire that marked the barrier of the wildlife preserve.  The crowd was respectful and quiet all watching the never ending arrival of small bands of geese who were gliding in against the brisk wind.  With furled wings, outstretched like a para-sail, they slowly floated downward looking for an unoccupied spot on the crowded field.  As soon as one group hit the tarmac another group high in the sky made their way into view.  The constant cycle continued, resembling a busy airport where no one was ever leaving the runway.  Look out below! 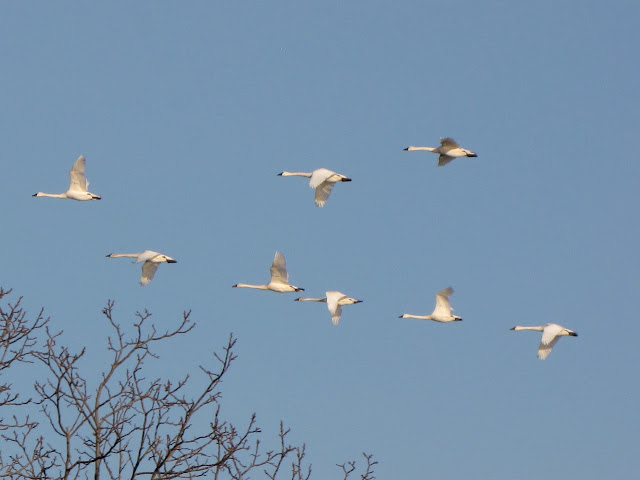 Trumpeter Swans in Flight
-------------------------------------------
The snow geese are also called blue geese because a small portion of the population are dark blue-gray in color due to a genetic pigment thingamajig.  One such goose is pictured above on the ground of the single white goose taking flight.  It was first believed that the two birds were different species but through scientific research, it was determined they were one in the same.  The Middle Creek Wildlife Management estimates that 80,000 to 100,000 snow geese will visit the area along with 10,000 trumpeter swans and 10,000 Canadian geese during the late winter months this year.  I always get camera envy at things like this, as major top-of-the-line professional equipment (well out of my price range) was capturing National Geographic worthy shots all around me. 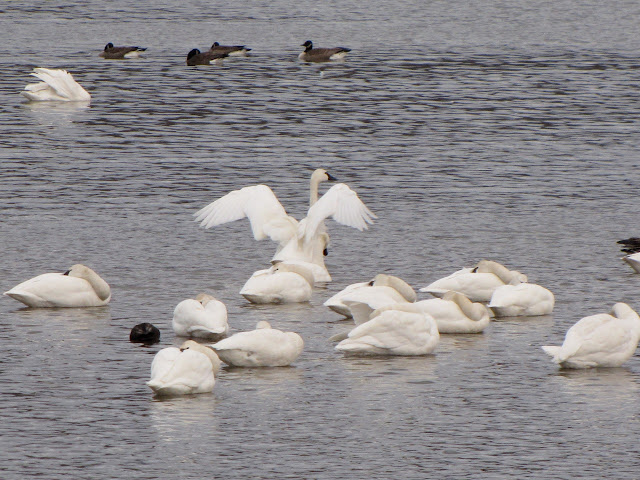 Trumpeter Swans at Rest on Reservoir
----------------------------------------------------------
The snow geese migrate from their winter feeding grounds along the Gulf of Mexico back to their summer breeding grounds near Greenland and northern Canada.  Middle Creek marks the midpoint of the migration route.  Everyone who comes to see the brief spectacle hope to see the large group of tens-of-thousands of snow geese suddenly take flight.  The best time to see the massive white cloud is at daybreak and dusk as they venture to and from the safety of the lake.  We were a few hours from sunset and it was getting colder as the wind increased and the sun was shrouded by gray skies.  We decided to head back to the car and scout other vantage points from other roads.  As we pulled out into traffic, we were both startled as the windshield was suddenly hit by a huge splat of goose %$#@!!!  It was a direct hit!  We could have been killed! 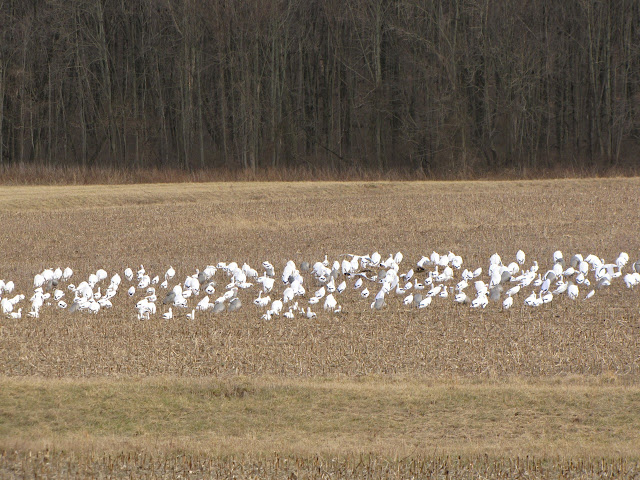 Less than Meets the Eye
--------------------------------------------
We were on a side road when we came upon a flock of about 100 snow geese (pictured above) feeding in a corn field along the roadside.  A few other cars had pulled off and were taking pictures of the birds that feed on waste grains that were missed during the fall harvest.  Donnie quickly pointed out that this flock wasn't real but a large group of decoys used to attract the birds to hunters who were lurking just outside the boundaries of the wildlife preserve.  At first I didn't believe him because several of the birds were moving, flapping their wings and rising off the ground.  However, they turned out to be sophisticated windsock decoys that were anchored into the soil and appeared to rise off the ground when caught by the wind.  We encountered several groups of hunters just outside the protected lands of Middle Creek who were also hoping to see the snow geese up close. 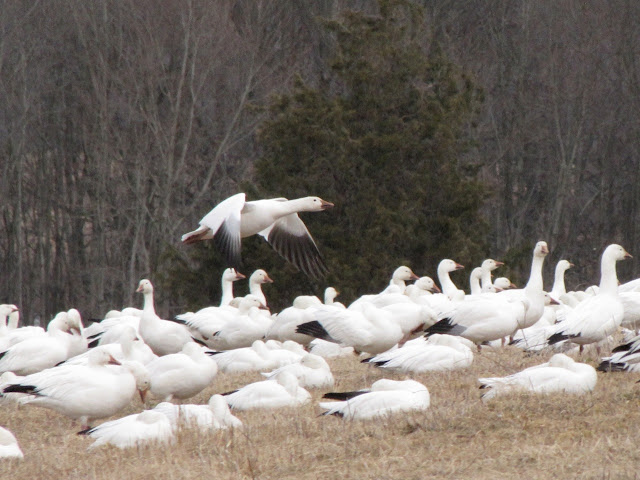 Sleeping, Standing, and Flying
----------------------------------------------
Hunting is essential to controlling the population of the snow geese, which has been rising at a rate of 8% every year.  The rise is caused by a decrease in the number of hunters and an increase in food sources as the geese have discovered the existence of the waste grains in farmer's fields.  In 1960 the population of snow geese was estimated to be at 50,000 birds.  The population has since increased to about 1,000,000 and is estimated to double by the year 2015 if the hunting harvest is not increased.  In an effort to increase the harvest, the Pennsylvania Game Commission offers permits to hunt on the Middle Creek game lands by a limited lottery drawing.  In an average year, 700 hunters harvest approximately 7,000 snow geese in Pennsylvania, which is included in the 30,000 to 40,000 total that are harvested along the entire Atlantic Flyway annually.   If the population continues to rise at the current rate, it will negatively impact the fragile habitat of all species of waterfowl.  It is ironic that hunting has become the key method of conservation in the effort to preserve waterfowl.  Goose... It's what's for dinner! 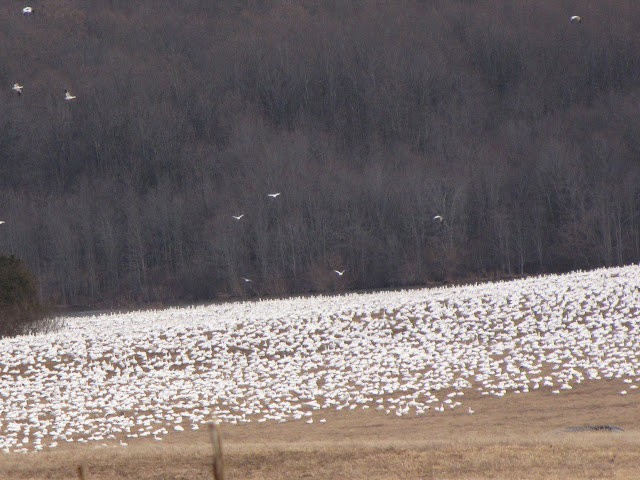 A Whole lot of Birds
------------------------------------
The huge flock on the hillside continued to grow as more and more groups of snow geese continued to land.  All the human spectators were hoping the flock would suddenly take flight for the safety of the water.  Twice the flock suddenly increased their volume of their constant honking, which is often a sign that they are about to fly.  However, the hysteria faded as suddenly as it began and poised camera equipment relaxed back into a patient stand-by status.  Several people brought their dogs, which seemed a little risky considering their were at least 30,000 birds less than forty yards away.  We were both curious if they were contemplating an accidental "drop of the leash" to create the shot everyone was craving to capture.  However, all remained quiet... not even a low bark could be heard from a distant farm dog.  Oh well, maybe next time... 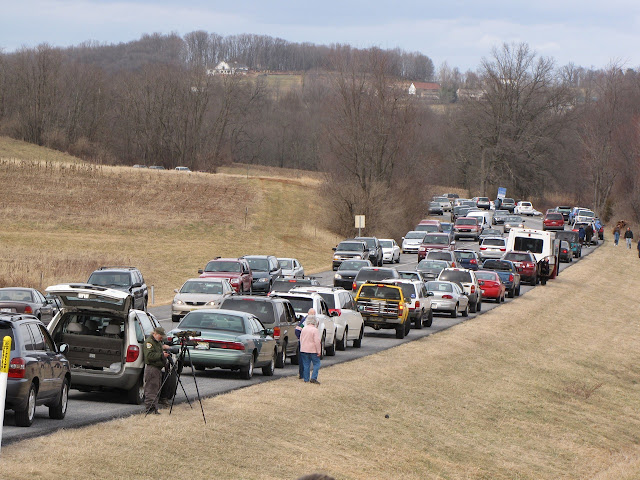 A Whole lot of Bird Watchers
----------------------------------------------
The crowd on the main drag of Kleinfeltersville Road continued to resemble the Friday afternoon rush hour on Route 501.  Many of the vehicles had out of state license plates, possibly the result of extensive advertising and news coverage by several media sources.  It was definitely something to see and experience in person.  After arriving back home, I made plans to return mid-week with my daughter Katelyn and son Tyler, to hopefully see the snow geese in mass flight.  We left Katelyn's dog Maxwell at home to avoid temptation! 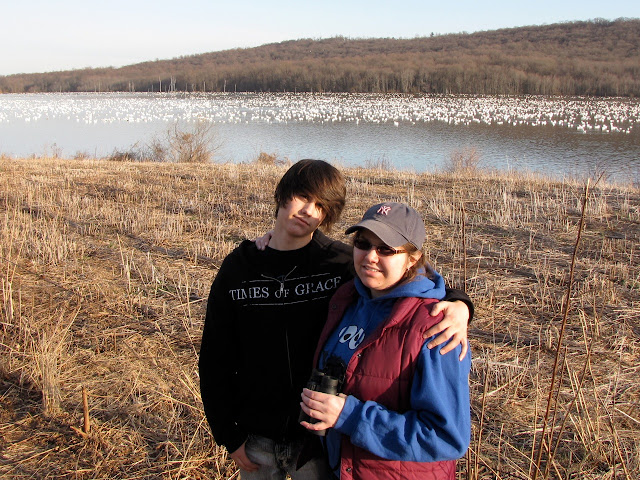