A Little Taste of Hershey History 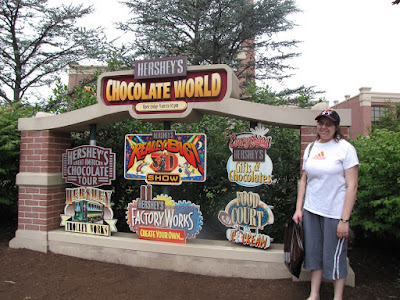 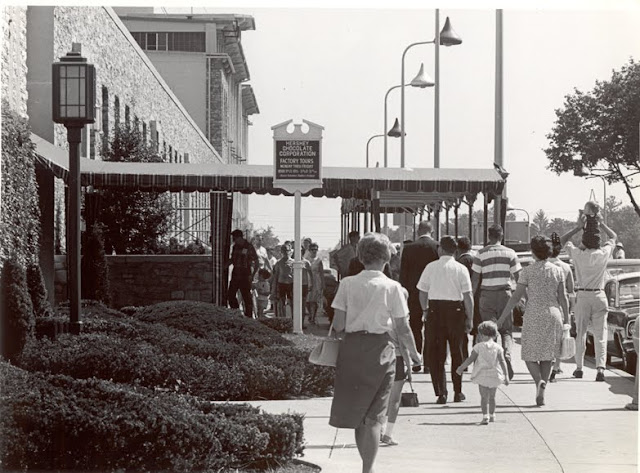 Chocolate Plant Tour Entrance
(Photo Credit / Hershey Park Archives)
--------------------------------------------------
One of my daughter's favorite places of all time to visit is Hershey's Chocolate World right outside the amusement park.  We have all been on the ride that gives a quick overview of how chocolate is made from start to finish a hundred times or more but Katelyn never gets tired of it and it is a must on the schedule any time we are in the area.  This is the one attraction in Hershey, possibly within 100 or more miles that has free admission and parking.  That is, until the ride is over and you are strategically deposited into the center of a shopping mall of chocolate!  The intoxicating smell overwhelms you and makes it impossible for anyone to make a purchase-free escape.  If you had to pay to go on the tour and were not dropped into the shopping area, they would probably lose money! Factory Plant Tour Original Sign
--------------------------------------------------
I remember when I was a kid attending Kissel Hill Elementary school in Lititz, when our entire grade was off to view the original factory tour when it was actually still in the real factory.  It was an unforgettable trip for me, mostly because our school bus got in an accident in Hershey.  It's not every day that a school field trip includes police involvement, how exciting!  It actually wasn't a big deal but as a kid, it was a little scary.  It was raining outside and our school bus was waiting at a stop light.  I remember looking out the window watching a huge eighteen wheeler make a wide turn in front of us.  I watched as the trailer of the truck got closer and closer to my window until it hit the front right hand side of our bus. Ouch!  The police soon showed up and everyone was quickly checked for injuries.  No one was hurt.  The front of the bus was damaged to the point that we needed a new bus and sat aboard the damaged bus to stay out of the rain until the new bus arrived.  I can't completely remember but I'll bet it seemed like an eternity until the replacement bus showed up. 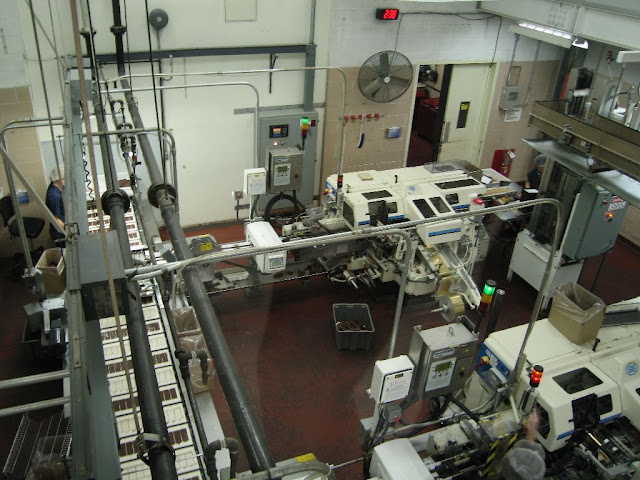 ------------------------------------------------------------
We finally made it to the factory parking lot and we could see the Hershey Park amusement rides in the distance and immediately began wishing for summer vacation to hurry up and arrive on the calendar! The interior of the factory was immense and loud with the sounds of industrial machinery.  The beautiful smell was much stronger inside the factory than outside and the rich dark brown chocolate was absorbed by the senses in every direction.  My favorite thing to see was the conch machines that mixed the liquid chocolate with long metal revolving arms.  A mini version of the machines is still included within the modern Chocolate World ride.  By the end of the tour, everyone now knew what they wanted to do when they grew up!  Without doubt, it was the greatest place in the world to work, if you could call it work!  At the end you were given a full size Hershey's Chocolate Bar to end your suffering for a taste of what was teasing you for the past half hour or so.  All you needed was a big glass of ice cold milk to wash it down to make all the world perfect! 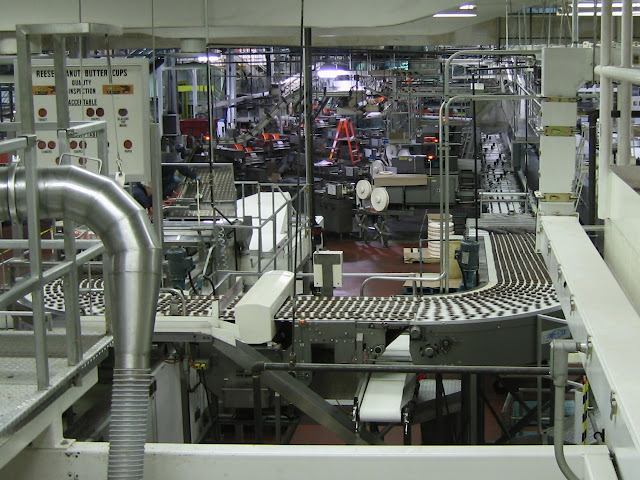 ------------------------------------------------------------
It was really a great field trip!  The first time most of us had ever been inside a real factory that showed the step by step process of how something we all loved was created from scratch.  We learned the geography of the far off places that were the source of coco beans, sugar, and almonds.  We witnessed the machinery that did the work of production with efficiency, precision, and speed.  We also discovered the location of the factory was not accidental but the result of the many dairy farms in the area that could supply the milk needed to make the product.  Who knew so much education could be learned by the taste of a sweet bite of chocolate?  The Chocolate World tour is a great marketing tool because all you wanted to do after you returned home was go out and buy more chocolate.  Now the current tour allows you to do just that within a few seconds after you devour the snack size reward at the conclusion of the tour!  I need more... RIGHT NOW! 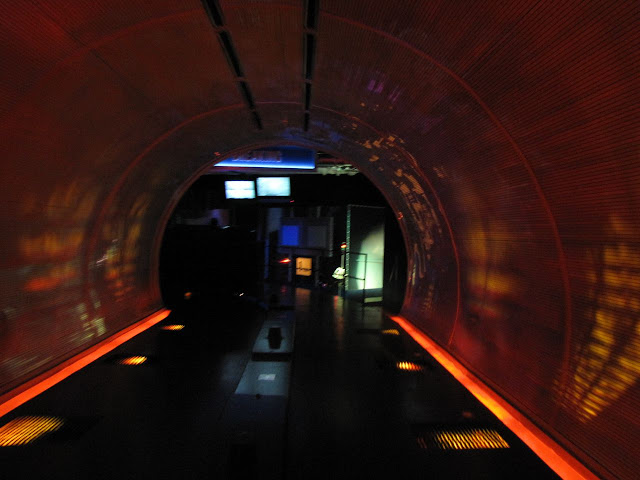 Chocolate World / Almond Drying Chamber
---------------------------------------------------------------
By the early 70's the popularity of the free factory tour was more than the factory could handle. The company decided to come up with a new version of the tour off site to satisfy the public's interest and not impede factory production.  Hershey's Chocolate World officially opened to the public during the summer of 1973.   My class and I were fortunate to be one of the final groups to gain access to the original factory tour at the chocolate plant on Hershey Avenue.  The new simulated factory tour was fun with cars that took you through the birth and growth of a chocolate bar and accompanying sweet products within the Hershey family.  The ride has gone through many renovations through the years, becoming more educational with connections to the history of the story of Milton Hershey's vision.   Many of the displays are new but others have not changed since the beginning, such as the drying chamber your ride car travels through that simulates the roasting of almonds.  It never gets old and can even help when clothing is damp from the water rides from inside Hershey Park!  Of course you would have to ride the tour 25 times to get completely dry but... hey... not a problem! 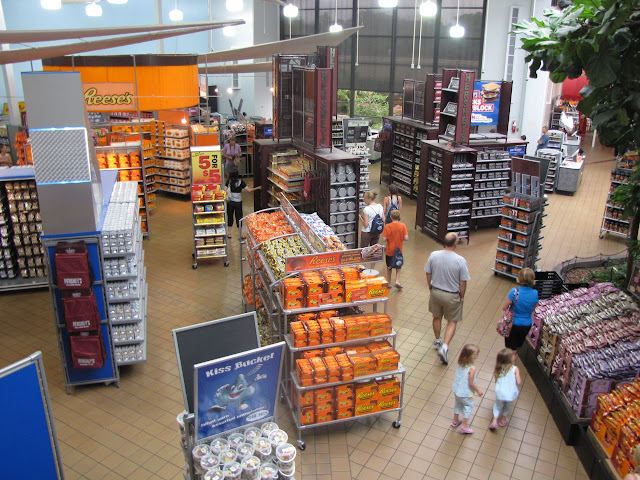 The Chocolate Mall
----------------------------------
You know you are reaching the end of the ride when your picture is taken with a bright flash, which can be purchased as soon as you exit the ride.  The exit off the ride-car is the most challenging part of this thrill ride, as the car continues to move on the track but the floor you step onto is stationary.  Watch your step!  The simulated tour always ends with a teasing small bite of the latest Chocolate product coming off the factory line.  Then you are dumped into a grocery store where chocolate and candy items are the primary food products for sale... but who's complaining?  And, although clearly being a tourist trap, the prices for the food products are reasonable, if not discounted.  As for the accompanying chocolate memorabilia and souvenirs... just grab a shopping cart and load up on the chocolate.  It's a better investment! 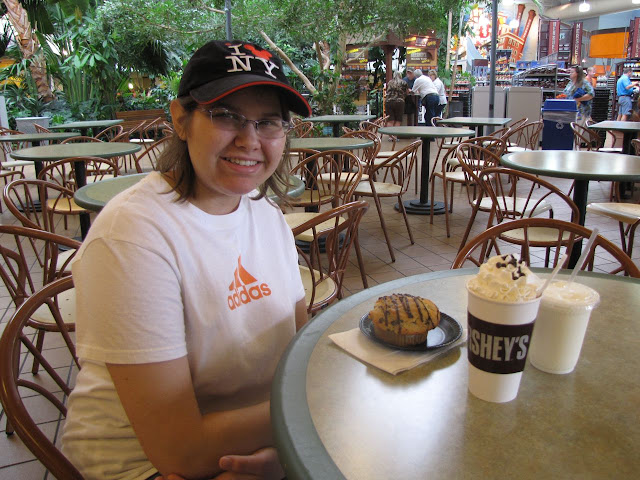 The Bestest Lunch Ever!
-------------------------------------
Some of the highlights of the food court area are the freshly made cookies, hot chocolate and extra thick milk shakes.  Oh, and they do have a good chicken salad wrap for those poor unfortunate individuals who are allergic to chocolate or are testing their will-power against the ultimate summit of temptation.  Viewing the story of how chocolate is made may no longer be at the actual manufacturing plant but the real center of attention is the product itself... not the setting.  The last Hershey factory to offer actual plant tours was the Smith Falls Factory in Ontario, Canada where visitors could look down onto the factory floor from a suspended walkway that routed visitors through the process.  Smith Falls was the first Hershey Chocolate plant to open outside Hershey, Pennsylvania in 1963.  Sadly, the Canadian plant closed in 2008 during a controversial restructuring company plan that moved many operations south to Mexico. 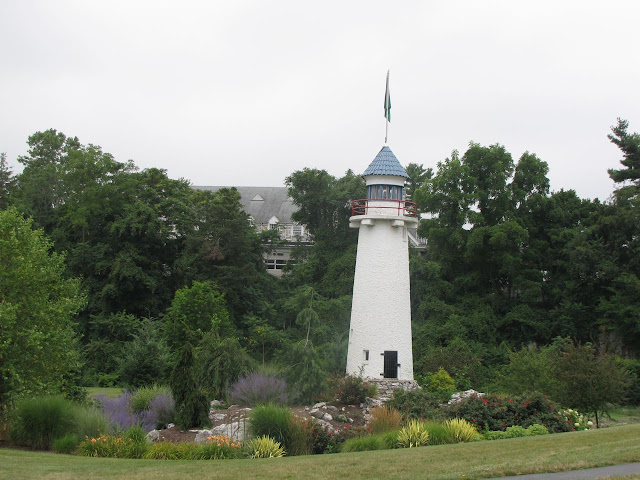 Hershey Pool Lighthouse
--------------------------------------
Just outside the front door of Chocolate World is a monument to another Hershey landmark attraction long lost to history.  Back in the day, most small towns did not have a community swimming pool, so Milton Hershey built a large pool in Hershey to attract visitors.  My father, Glenn "Shorty" Martin, can still remember when he was a kid and the few times every summer the family would load up the car, pack a picnic lunch, and head to the famous Hershey Pool.  The original pool, built in 1912, was dubbed the Seashore Outside your Door by Milton Hershey himself.  Over time, it continued to expand to include more attractions, such as the Hershey Park Starlight Ballroom that attracted the Big Bands of the era such as Glenn Miller and Tommy Dorsey.  In fact, my father asked for my mother's hand in marriage nearby the dance pavilion in the summer of 1961.  What a romantic! 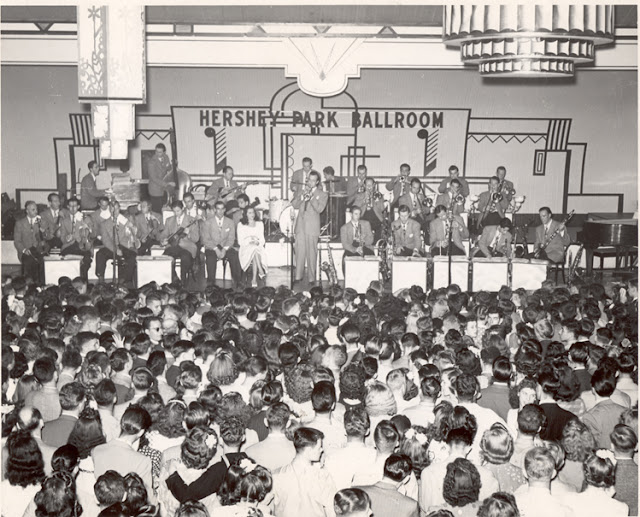 Harry James & Band Perform
(Photo Credit / Hershey Community Archives)
---------------------------------------------------------------
The pool was considered an enormous size for the time period and was also used as an ice skating rink during the winter months.  The pool had some thrill rides of its own with a steep slide, where people could ride down on a wooden toboggan style sled that would careen downward and then carry the rider a short distance across the pool's surface.  There was also the high dive where sudden daredevils would attempt to impress the girls by risking a fatal neck injury.   It's the kind of good old fashion fun that would result in major lawsuits today! Ah, the good old days... 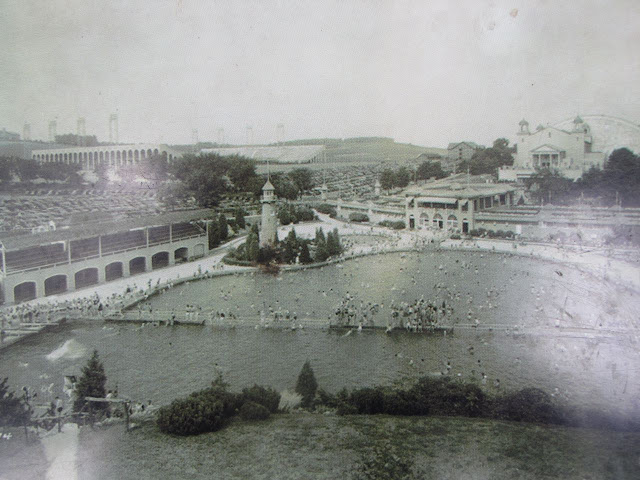 Hershey Pool Circa 1930-1940
(Photo Credit / Hershey Park Archives)
-----------------------------------------------
The pool continued to expand and eventually was composed of four pools that were seamlessly built within close proximity to each other.   During the pool's heyday in the 40's and 50's, the pool was attracting over 100,000 visitors a summer.  As time passed, more communities began to build their own swimming pools that were much easier to travel to and attendance at the Hershey Pool began to decline.  Eventually the pool was closed down, along with the nearby band shell.  A grand era in Hershey entertainment had ended.  The only thing that remains of the original pool today is the lighthouse that can be seen in the old photograph above.  Today it can been seen on the right hand side of the walkway between the front door of Chocolate World, as you walk toward the front gates of Hershey Park. 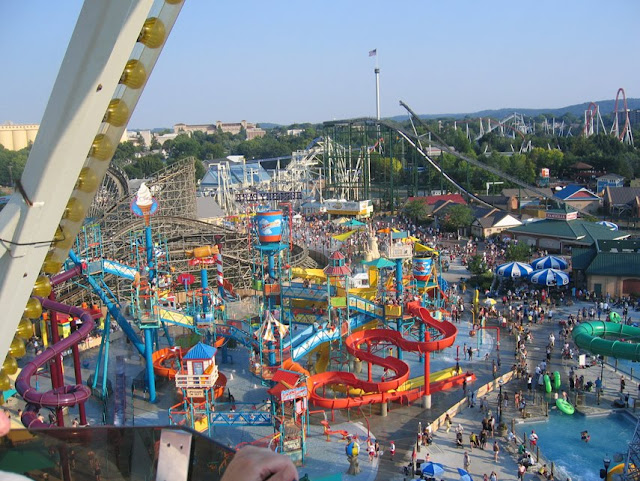 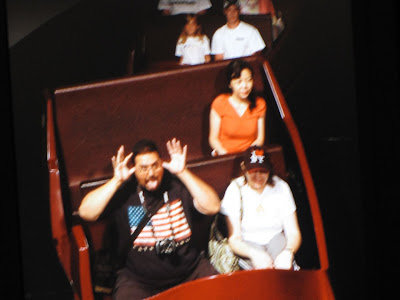 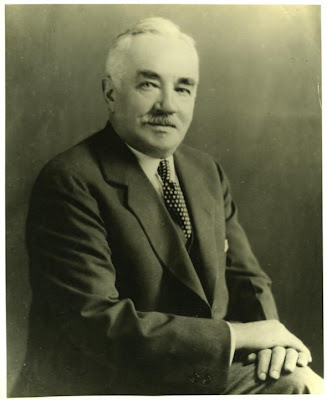