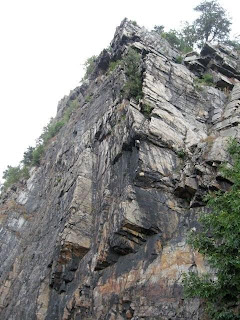 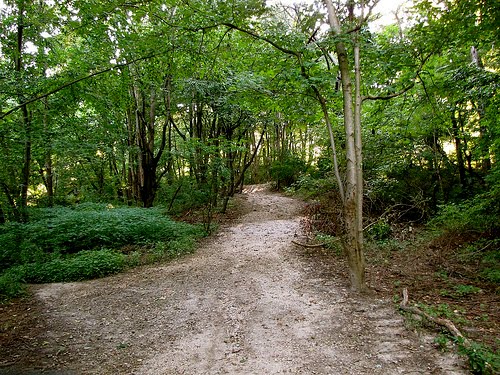 Trail Entrance / Chickie's Rock
--------------------------------------------------------
Let's take a little hike to check out one of the best views of the Susquehanna River just above the city of Columbia, Pennsylvania.  Before the bustling city of Columbia became a major transportation hub on the east coast, the area was inhabited by the local Susquehannock Indians.  The rock outcropping just north of the city was a great vantage point for the Native Americans to observe activity along the local river basin.  Chickie's Rock gets its name from from the Lenape word of Chiquesalunga, which translates to Place of Crayfish. The crayfish were caught in a nearby stream that is now known as Chickie's Creek, which runs along the ridge.  From a geological standpoint, it is one of the highest places above sea level on the East Coast of the United States at over 520 feet. I wanted my son Tyler to join me on this journey, so I entered his bedroom, pried his cold fingers away from the ever-present X-box controller, and dragged him out of his boy cave into the blinding light of the outside world.  All aboard... 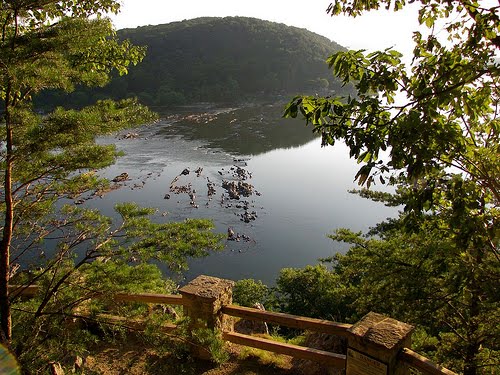 View West / Chickie's Rock
------------------------------------------------------
The best part of hiking to the observation area on the rock outcropping is that you can drive most of the way up Chickie's Ridge on Route 441 just north of Columbia toward Marietta.  There is a parking area on the downward slope of the first hill, where you start the trail.  The path starts out steep but quickly levels out and follows along the power-cut access roadway that cuts through the ridge toward the river. Soon you have the option to stay on the dirt road or take a trail cut-off to the right that climbs up into the tree line.  I wasn't sure how long the alternative trail would take or how well it would be marked, so Tyler and I decided to ignore poet Robert Frost's advice and took the one more traveled by.  We wanted to avoid taking a wrong turn and accidentally winding up on the Appalachian Trail and on our way to Georgia by mistake.  The trail was only about a half of a mile in length and an easy journey by trail standards.  We took notice of the posted warning signs concerning the upcoming ledge and were soon standing on top of the river with an incredible view laid out before us. 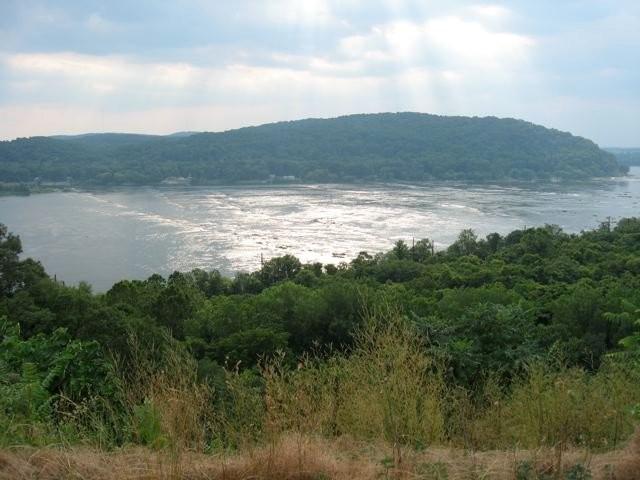 View of Breezy View Lookout
---------------------------------------------------
Tyler and I had previously attempted to walk to Chickie's Rock last summer but started at Breezy View Overlook Park nearby and wound up descending to the river bank, rather than climbing to the top of Chickie's Rock like we intended.  It turned out to be a good mistake and led to some interesting discoveries.  The climb down is really steep but short as you snake your way between rock formations cropping out of the side of the ridge. You soon come to a wide smooth trail running in both directions that was shaded and resembled a tunnel of green foliage.  We had no idea where we were or which way to go, so we just decided to turn right, in the direction of Chickie's Rock. The trail was straight as an arrow and reminded me of a well traveled colonial era turnpike.  I later discovered the trail is part of the Susquehanna Heritage Trail that runs along the eastern bank of the Susquehanna River.  The trail is an easy walk, running along the remains of the old Pennsylvania Rail-bed and Canal that once supported the local iron industry. 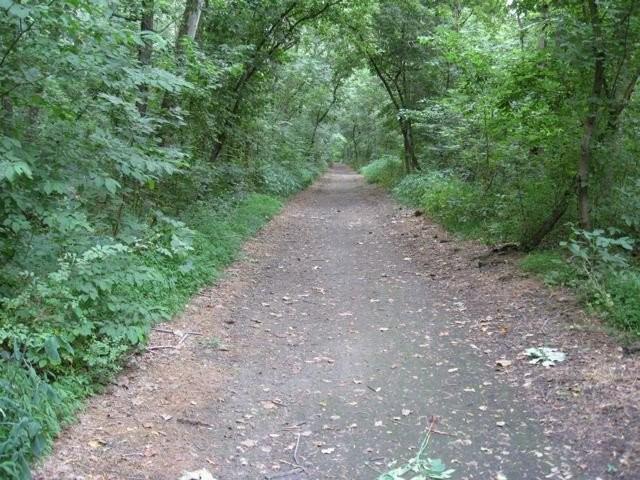 Susquehanna Heritage Trail
---------------------------------------------
This section of the Susquehanna River has a rich history that helped the local economies thrive during the peak years of Pennsylvania's iron industry. During the 1890's, there were a total of thirteen iron coke furnaces producing pig iron along this stretch of the river. The furnaces were fed by anthracite delivered from the coal mines in the north-central part of the state by the Pennsylvania Canal and later, the Pennsylvania Railroad. The glory days of the iron industry came to an abrupt end when new technology outdated the anthracite fired furnaces.  The industrial iron sites along the river bank were abandoned and slowly reclaimed by nature over time. With the frequent flooding of the river, the remains of the long dormant industrial sites have mostly vanished with the past. However, we found a surprising historical marker along the trail that pointed out the stone remains of one of the ghost furnaces that once dominated the area. 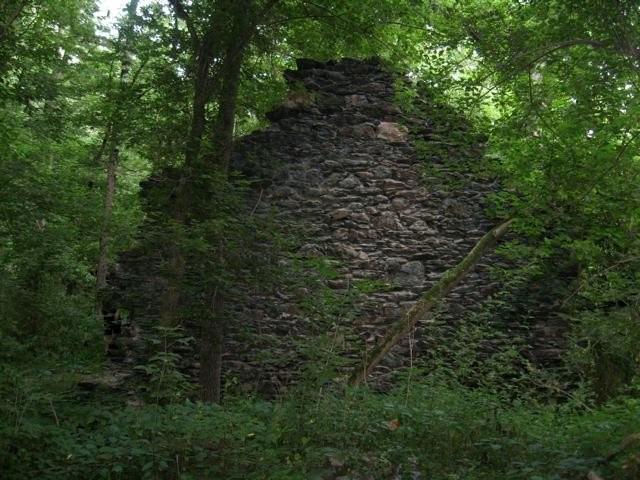 Coke Iron Foundry Remains
----------------------------------------------
It was hard to see at first because of the dense overgrown greenery covering the stone remains of the foundry.  Without the sign, we would have missed it all-together.  We took a quick pit-stop to check it out and explore what remained of the furnace buildings.  Soon, we continued on with our journey through the tree covered canopy of the trail toward the north that paralleled the river and modern rail-lines.  Eventually the trees gave way to an open area that exposed the face of Chickie's Rock.  We had arrived at our goal but were at the bottom rather than at the preferred top. It was an impressive sight to look up at such an imposing tower of natural stone, which I later found out was mostly chert and schist.  My old eighth grade science teacher Mr. DeRemer would (might) be impressed! 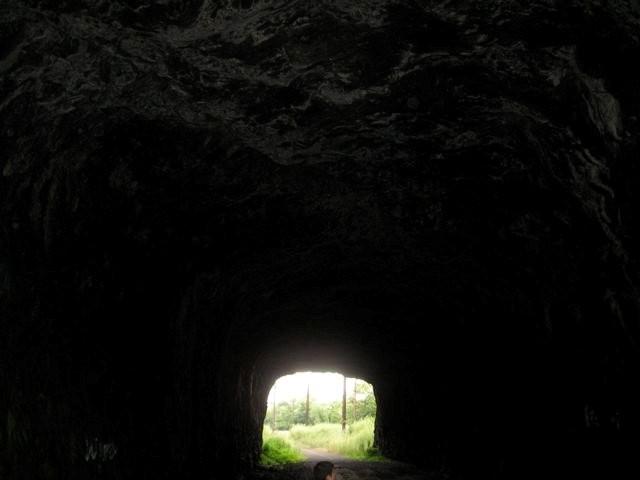 Railroad Tunnel / Chickie's Ridge
-----------------------------------------------------------
After a short while, we did an about-face and headed back the way we came, passed our entry point onto the trail, and continued on toward Columbia.  It was a short walk before the trail came upon an impressive tunnel that had been carved out of solid rock from the old abandoned railway.  This was Tyler's favorite part of the trail.  Columbia Park lay just beyond and we had now completed this mile and a half section of the Susquehanna Heritage Trail.  We made our way back to our entry point and scaled the incredibly steep ridge back up to the Breezy View Overlook Park, where our car was parked.  It took a lot longer going back up than it did going down.  Tyler had to take several breaks, unable to keep up with his old man!  He was learning the hard way that scaling simulated mountains in the video game world does not equate at all to real life.  We made plans to return to find the way to the top of Chickie's Rock but ran out of summer!  I hate when that happens! 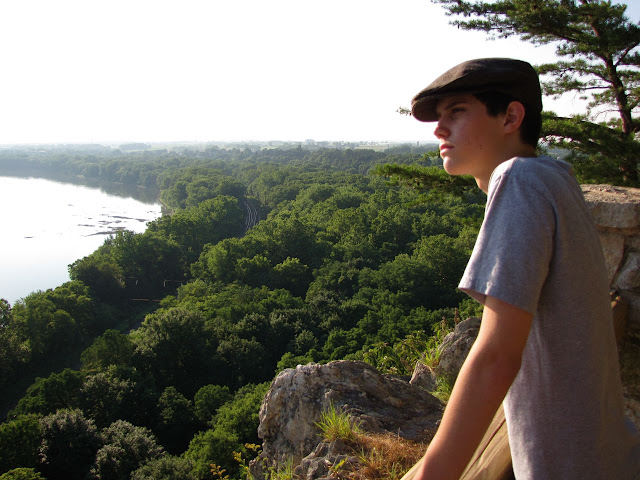 Tyler Taking in the View
-----------------------------------------
Now that we had finally made it to the top of Chickie's Rock the view was incredible!  There are several vantage points to take in the view in both directions.  It was quiet and peaceful and we just relaxed and absorbed the view for about an hour, rotating periodically to take in the different perspectives.  There are sturdy stone and wood barriers to protect you from the edge and even small children were there, safely enjoying the sights.  Rail-lines still run along the river bank between the Susquehanna Heritage Trail and the river itself.  While we were there, a long empty coal train rolled by far below us, heading north to refill its empty coal cars.  It took several minutes for the train to pass and must have contained well over 100 rail-cars. The coal that once supplied the iron furnaces is now delivered to coal-fired power plants that produce electricity for the east coast.  The more things change the more they stay the same! 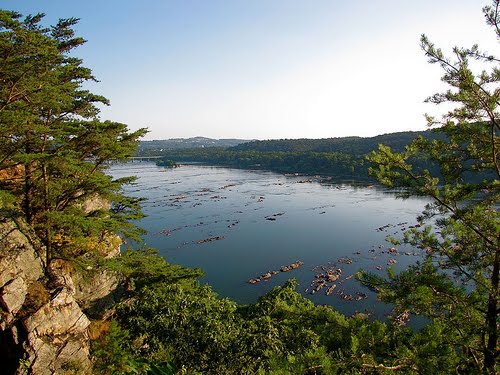 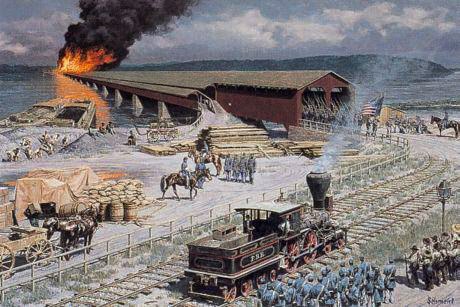 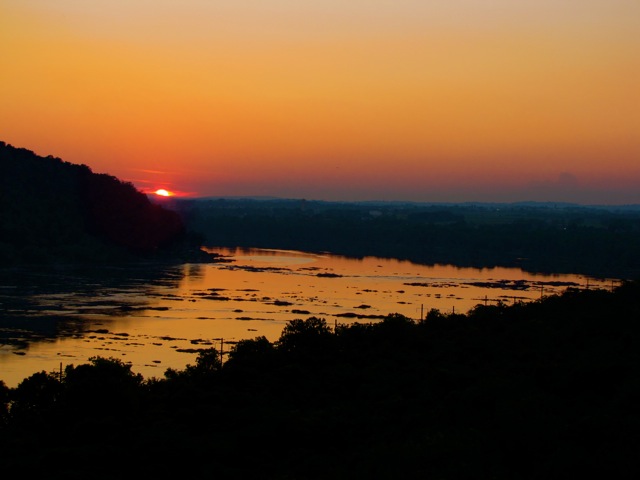 Sun Set / Breezy View Lookout
---------------------------------------------------
Chickie's Rock State Park closes at sunset so we decided to head back to the car and find something to eat.  We descended the hill into the edge of Columbia and hit the drive-thru at Burger King.  Next, we decided to head back up the hill to Breezy View Overlook Park to watch the sunset over the Susquehanna, while enjoying a whopper with cheese and a large fry.  It doesn't get much better than that!  The sun slowly fell from the sky and became hidden by the hillside on the western shore, illuminating the river below in a bright glow of orange.  It was a beautiful ending to a really fun adventure and we stayed to watch the whole show until the sun completely disappeared from view.  On the way home we talked about returning to explore the trail below again, which was one of Tyler's favorite trails of all time.  Maybe we would get lucky and a long freight train would pass by us at ground level on the trail!  Maybe next summer! 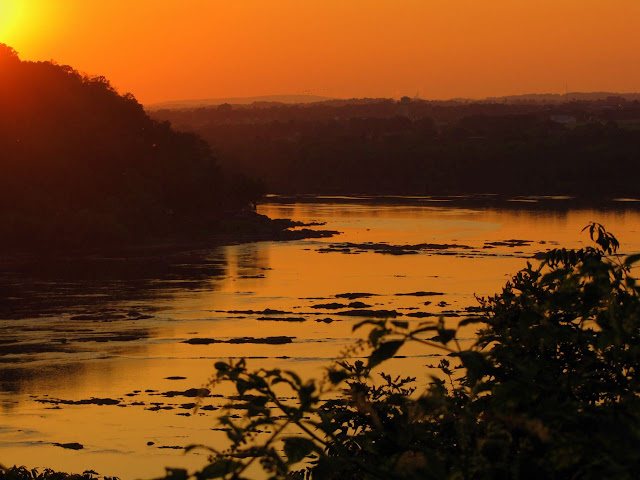 Posted by Camp Martin Travels at 11:10 AM