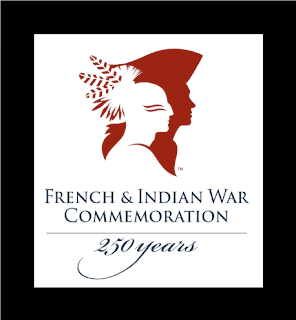 Map of Forbes / Braddock's Roads
------------------------------------------------------
Following Braddock's defeat in Western Pennsylvania in 1755, the British Crown created a new position within the government in an effort to turn the tide of the war.  William Pitt was named Prime Minister and was granted sweeping powers to remove the French threat from North America.  Pitt was an eccentric politician but proved to be a brilliant architect of war.  A new push was organized to move the armies of King George II west and north toward key French strongholds on the continent of North America.  In 1757, General John Forbes was selected to lead a new expedition west toward Fort Dusquene at the Forks of the Ohio. 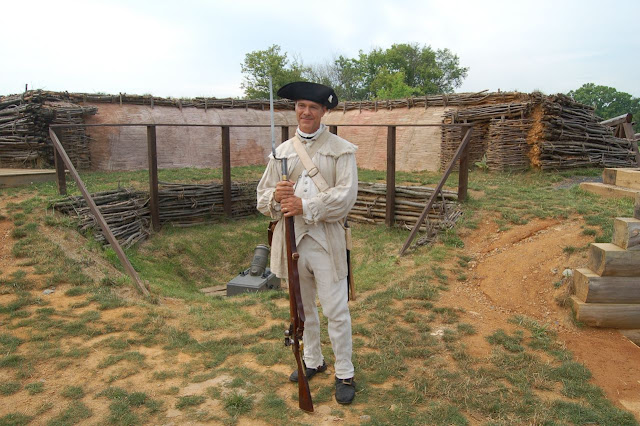 Fort Sentry on Guard
U.S. Army Heritage + Education Center
Carlisle, Pennsylvania
-------------------------------------------
Forbes studied medicine at Edinburgh University in Scotland but gave up the idea of becoming a physician to live a soldier's life. Forbes would prove to be an academic and cautious officer, well versed in military strategy and tactics. Not discouraged by Braddock's previous failure, Forbes decided to once again build a road west toward Fort Duquesne.  But rather than follow Braddock's route, he would forge a new road further north, through western Pennsylvania.  The leadership of Virginia and Maryland protested, knowing that success would equate to Pennsylvania settlers migrating west to settle the territory.  The true motivation of the war effort for Americans was often rooted in the promise of future financial profits harvested from the rich lands in the western frontier.  Forbes was not interested in the political impact of his war strategy and turned a deaf ear to the debate between Pennsylvania, Maryland and Virginia who all claimed rights to the Ohio Valley.  However, to ease colonial tensions and keep the French off balance, he decided to have crews simultaneously work on re-clearing Braddock's Road in the frontier of Virginia. 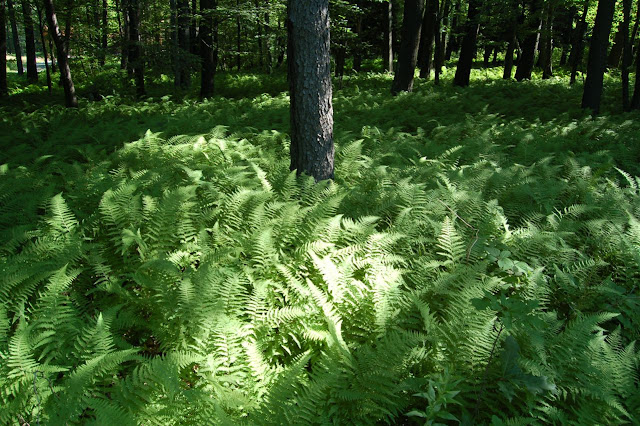 Forbes Road near Fort Duart
-----------------------------------------------
In December of 1757 General John Forbes left Carlisle, Pennsylvania with 7,000 troops and began a slow and methodical march through the western wilderness.  William Pitt was very supportive with financial payments for everything Forbes needed.  Ironically, Pitts' free spending and growing debt to fund the French and Indian War, would later become the center of the debate that would lead to the next war, The American Revolution.  Forbes hired colonial workers at high wages to construct the road, while his soldiers protected the right of way.  Unlike Braddock, Forbes understood the importance of his Indian allies and valued their insight and support.  Forbes was careful of ambush, moving slowly and building small support fortresses along the way to give the army and local settlers a safe haven if attacked.  Like his predecessor, Forbes was later joined by George Washington, who hoped to represent Virginia's interests, as well as his own, concerning a roadway being constructed through territory claimed by several colonies. 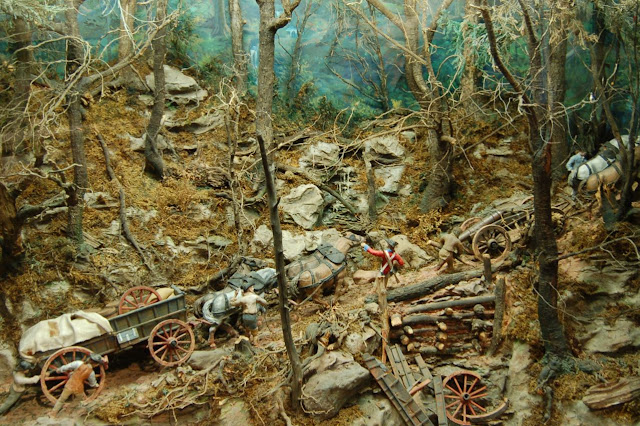 Mountain Pass Switchbacks
-----------------------------------------------
Engineers and Indian scouts forged ahead of the construction party to discover the best route to build the road west.  The road itself would not meet our expectations of what a road should look like today.  The road was slow to build using the crude tools and technology of the time period.  As a result, it was a one way road only wide enough for a Conestoga wagon to pass through to deliver needed supplies. Mountains were crossed using a new technique of creating multiple switch-backs that zig-zaged up the steep slopes.  This technique made the road longer but much more practical with a lower incline grade that made it easier for draft animals to pull the heavy supply wagons up the mountain side.  It was still a monumental task to ascend the mountain road and often entailed men helping beasts by pushing loads from behind.  Wagons fell victim to the abuse of the road and damaged equipment was abandoned and pushed over the slope.  Often the roadway followed the way of Mother Nature, following waterways that cut their way through the rocky terrain over time.  If you ever noticed, our roads, railroads, etc. still follow Mother Nature's lead when constructing transportation routes through mountainous areas.  It's cost effective! 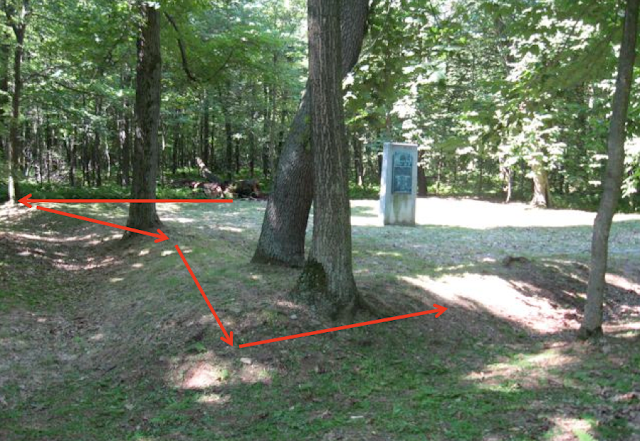 Outline of Fort Duart
-------------------------------------------
On one of our stops we came upon the remains of a small freighter's fort called Fort Duart along the former roadway in the middle of the woods.  After the area was discovered, local residents, who had built vacation homes in the area, decided to preserve and maintain the site.  It is in the middle of Nowhere, USA and I would have a hard time ever finding it again.  I was surprised that our large tour bus could navigate the narrow roads and was able to deliver our group within walking distance of the site. The area was beautiful, covered in wild bright green ferns that hid all evidence of the location of the original roadway. We were met by two representatives of the local homeowners association who revealed key points of reference.  The raised earthen walls were still evident with new trees growing up through the remnants of the palisade fence base. A monument few see was erected on the site to pay tribute to the space. 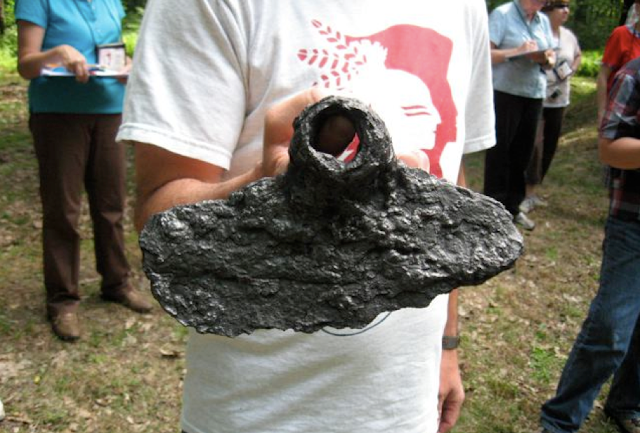 Forbes Road Artifact
--------------------------------------
General Forbes continued to make his slow advance toward Fort Duquesne and had dispatched orders to avoid any contact with the enemy whenever possible.  He continued to order the construction of a series of forts to protect the right of way, some small, such as Fort Duart, and others larger, like Fort Loudoun.  General Forbes led from the rear sending his second-in-command General Henry Bouquet to the front to oversee the ongoing roadwork, construction of forts, and command of the troops. Fort Loudoun was a large but simply designed fort, built along the Forbes Road that was rediscovered and brought back to life.  Off the beaten path, the reconstructed fort has few visitors and even less financial support.  Sadly, it is once again falling into decay.  After the war, many of the forts were decommissioned and abandoned.  Newly arriving setters carried the dressed logs away to build their own homes, others fell prey to Mother Nature and the elements.  Fort Loudoun is re-telling the story of how a fort slowly dies.  The front gate fell off over a year ago and no funds are available to fix it.  The bottom of the fence posts are beginning to rot away where they meet the wet ground. 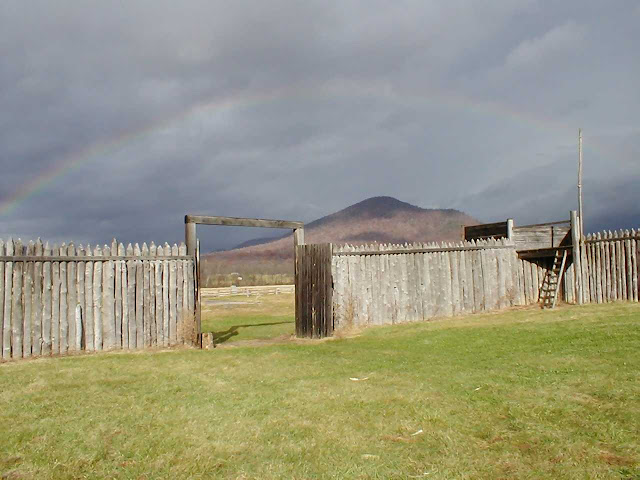 Fort Loudoun / Franklin County
-----------------------------------------------
Fort Loudoun was a point of support as the British Army pushed west but saw no action during the war.  However, in the aftermath of the French and Indian War, the remaining British garrison faced off against a vigilante group of settlers during the Black Boys Rebellion.  Following the war, the British began to re-establish trade relationships with former enemy tribes who had raided Franklin County settlements.  A group of renegade men began to capture trade wagon trains heading west as an act of revenge. The Black Boys group got their name by blackening their faces with black soot to conceal their identities.  The fort was fired upon several times but following several key arrests the rebellion fell apart.  The future of Fort Loudoun is uncertain but several colonial reenactments are scheduled at the site in hopes it will attract more attention, visitation, and financial support. 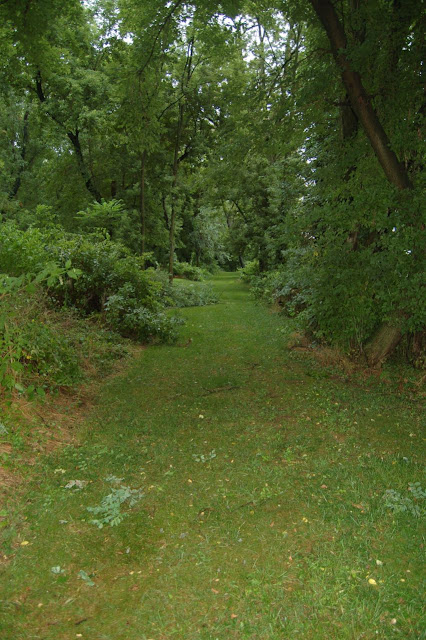