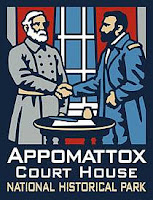 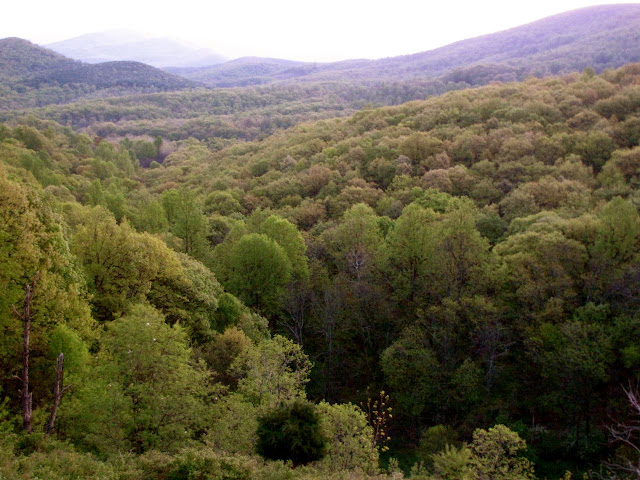 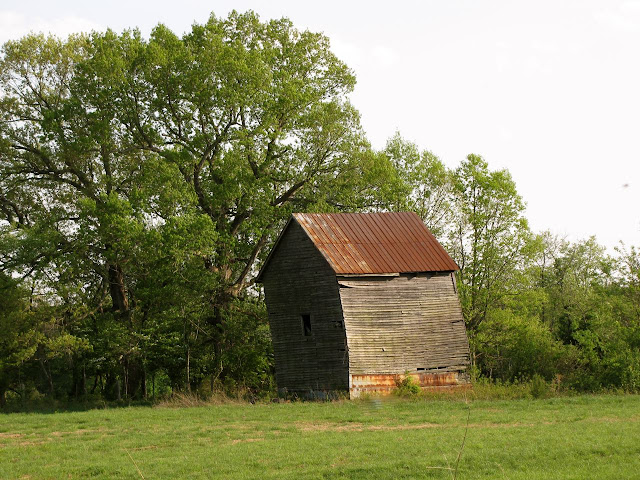 An Old Leaning Barn
-------------------------------------
At first, I thought the GPS was taking me back toward the highway and every time a turn was pending I was expecting to come upon the main road.  Instead, every turn led to a narrower road through areas of true rural poverty.  Most roads were void of any signs of community but every so often I would come across a small collection of run down mobile homes that almost looked condemned.  Other times, a dilapidated home was nestled next to a nice neat vinyl sided house.  The large population of cattle grazing on large fenced in pastures were the only living things visible mile after mile. 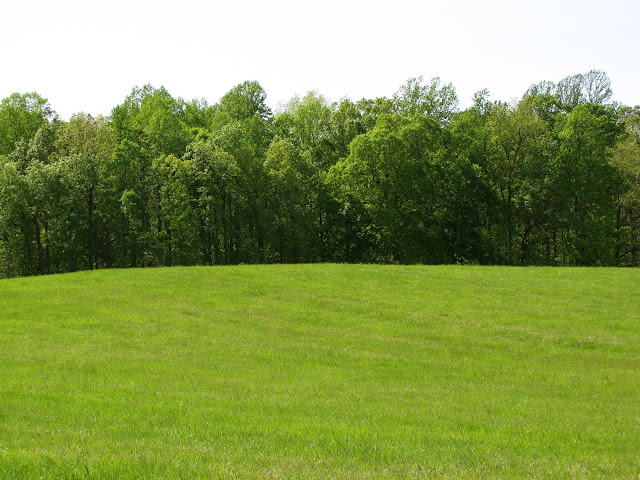 Pastures of Green Spring Grass
-----------------------------------------------
I passed tract after tract of pine tree farms at various stages of maturity.  Some areas had been recently clear-cut and showed the ugly side of man’s impact on the environment.  Other areas showed the rebirth of conservation of bright green seedlings taking root for future harvests.  I later learned that 60% of our harvested wood now comes from tree plantations, many of which reside in the southern states.  I was glad I had half a tank of gas because after driving more than an hour, I had yet to see another car, let alone, a gas station.   I didn't stop to get out of the car to take too many pictures due to my intense fear of hillbillies.  I don't know, maybe I've seen the movie Deliverance one too many times. 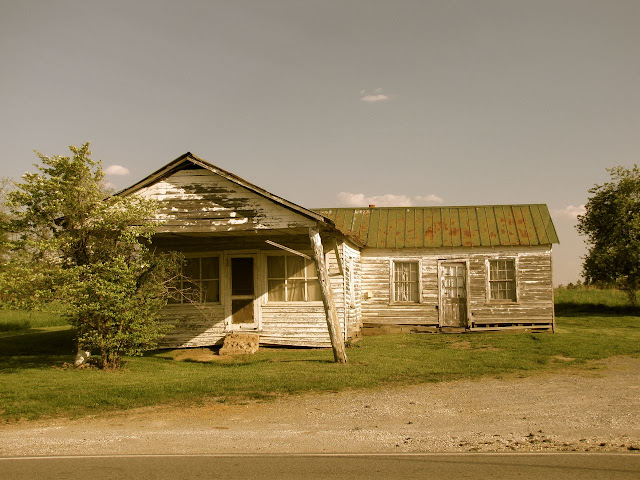 Old White Washed House
---------------------------------------
I was beginning to get a little worried that my GPS was not taking me to the correct target location.  I am new to the device so I was hesitant to start pressing buttons to try and find out where it was actually taking me.  I decided to trust the technology, amazed that it even recognized these rural roads that seemed more like logging roads that were marked by numbers and not actual names.  In addition, the unseen woman within the GPS with the British accent sounded very confident as she guided me forward. 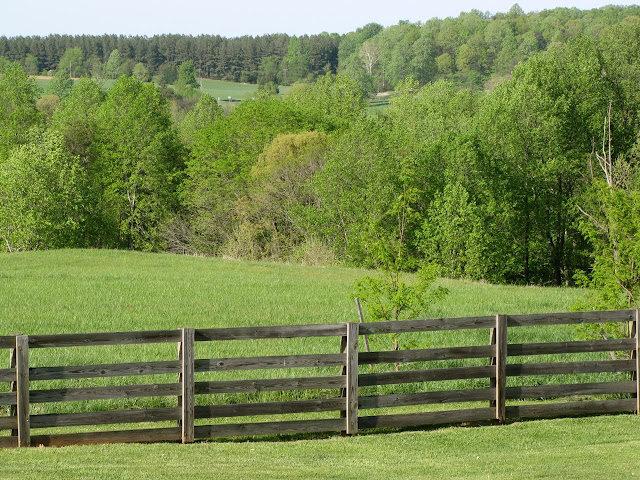 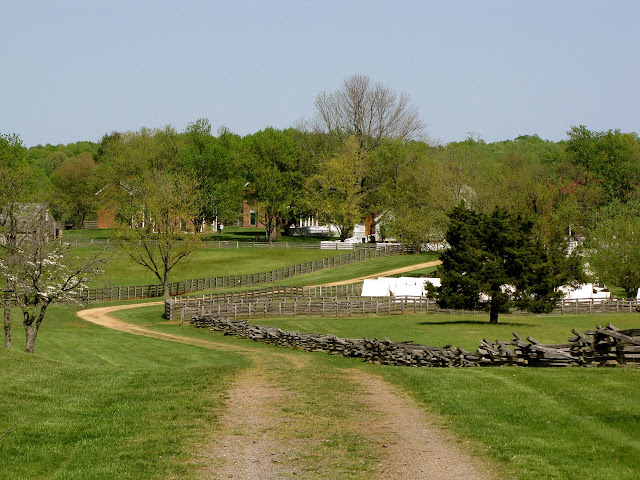 The Old Road into Appomattox
------------------------------------------------
I continued onward to find my hotel, which turned out to be quite a challenge since it was not actually located in Appomattox but on a nearby highway that would have brought me here if I would have left directly from Charlottesville at the start of my trip.  However, I was thankful for the rural trip through country roads in contrast to the familiar highway route.  It gave me a unique travel experience and a glimpse of life in the back country of rural Virginia and the wealth and poverty contained within. 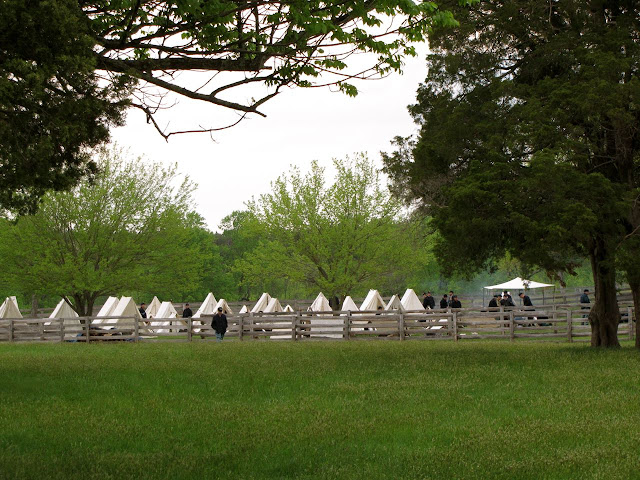 The Union Camp at Appomattox
--------------------------------------------------
Appomattox Court House was a small village in 1865 when it was agreed to be the meeting place between General Robert E. Lee of the Army of Northern Virginia and General Ulysses S. Grant of the Army of the Potomac.  It continues to be a small town located in between the larger cities of Lynchburg and Richmond, the capital of the state of Virginia.   The historic village was a few miles from the newer town closer to the highway where my tent, I mean hotel room, was located.  After turning around four times and making two phone calls I found the Super 8 Motel nestled by a strip mall, Burger King, KFC, and Wal-Mart. 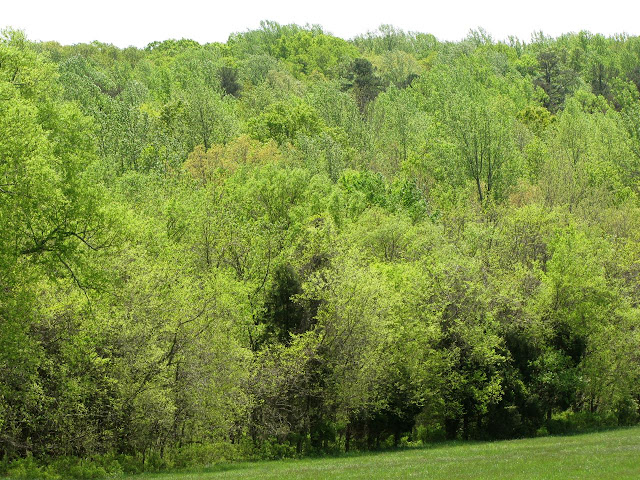 Early Spring in Appomattox
-------------------------------------------
I checked in and changed into my wool suit of Union Blue and took the first step of the next phase of my journey of traveling back in time to April of 1865.  I backtracked to the reenactment site to join my brothers from the 30th PA Co. E.  Join me next time to read about one of the most well-preserved and naturally beautiful historic locations I have ever visited.  I reckon I’ll see you next time!