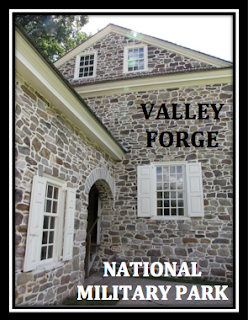 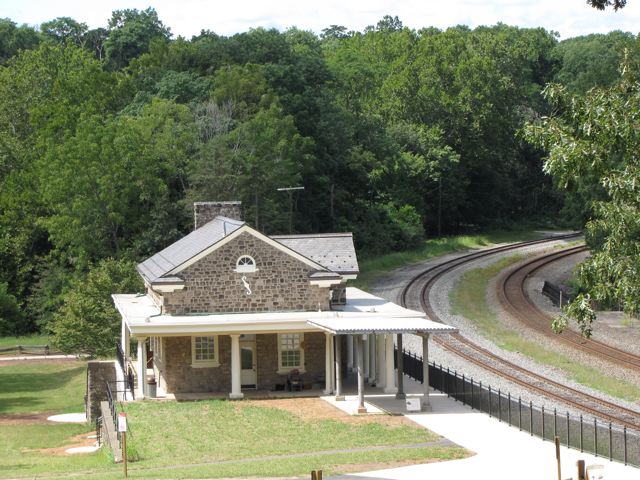 The Train Station
-----------------------------------------------------
Katelyn and I were roaming the park and began to circle the perimeter on a paved road where we soon came upon signs pointing the way to Washington's headquarters.  I was anxious to find it because I had never seen it before.  When I was a kid my parents took us to Valley Forge to see the Bicentennial Wagon Train that had passed through Lancaster and was making its way to Philadelphia.  However, I don't remember a whole lot about the trip other than the wagons.  If anyone remembers the wagon train please leave a comment below.  Anyway... we followed the signs and made our way into the new and improved parking lot. 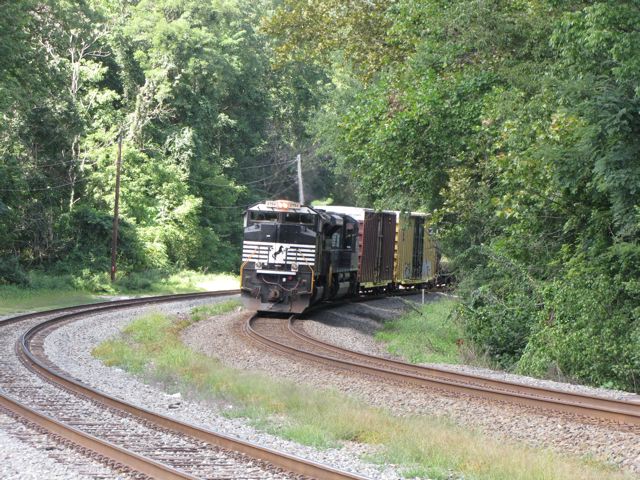 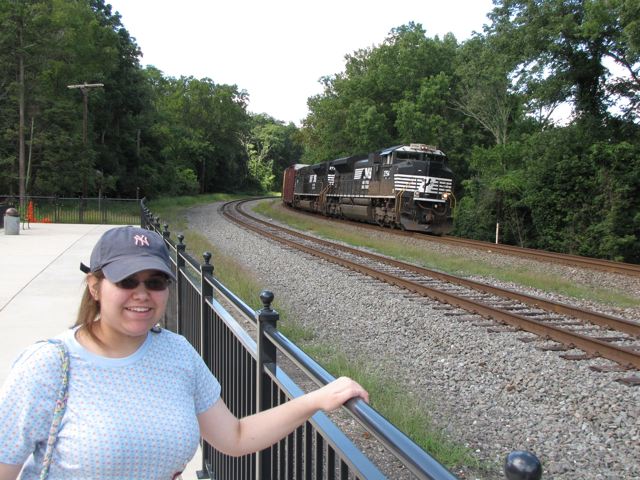 The train station is currently being renovated into a new visitors center and museum. The new parking area and sidewalks was the first stage of the project recently completed.  Katelyn and I are both a couple of "Train Junkies" and asked the park ranger if the line was still active.  He said it was an active freight line but he didn't know the schedule.  As if on cue, the ground began to rumble and a Norfolk Southern group of engines thundered around the railway bend. What luck!  The train had well over 100 cars and took several minutes to pass by the station.  Ok, time to turn away from the modern world and descend down the steps to 1777. 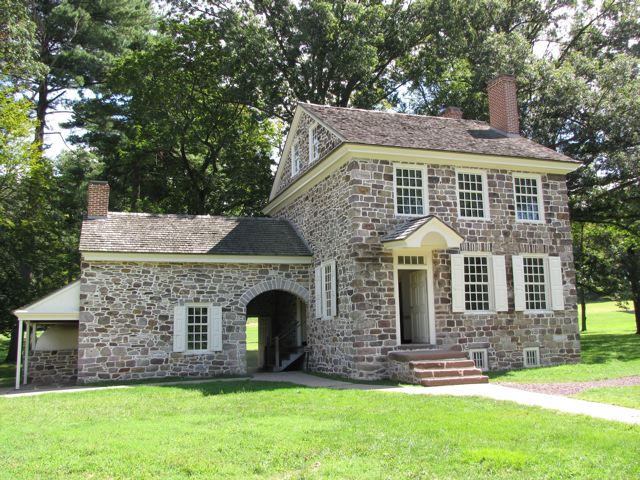 Washington needed a place to reside and conduct the business of the Continental Army.  He rented a house from the Widow Deborah Hewes who was the tenant of the home at the time.  The house was owned by Mrs. Hewes' nephew, Isaac Potts, who operated a nearby grist mill. The house soon became a bee hive of activity with dispatch riders arriving and leaving at all hours of the day and night with orders and correspondence.  The dining and sitting rooms downstairs were transformed into busy offices jammed with portable desks.  Officers Alexander Hamilton and Marquis de Lafayette often slept in the upstairs bedrooms.  Washington retained one bedroom for himself, perhaps the only refuge of privacy he could hope to find in the small crowded house. 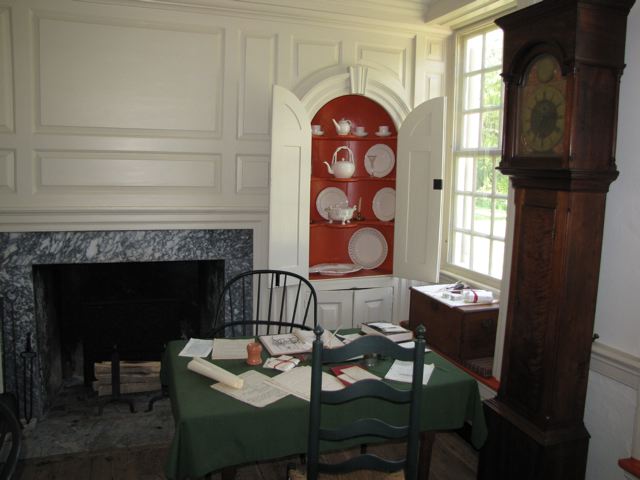 Washington was accompanied and protected by a select group of soldiers created by Congress called the Life Guard.  The unit was made up of selected men from all 13 Colonies and was described as an elite force.  Their mission was to protect Washington and other top officers as well as the sensitive papers of the Continental Army.  The group was first organized in 1776 and had approximately 180 men from a combination of infantry and cavalry backgrounds.  The unit grew to over 250 men when the army camped at Morristown, New Jersey, because the British Army was much closer and the threat of attack higher.  The honored men of the Life Guard built huts around the Isaac Spots House and organized a detail to protect the Continental Headquarters around the clock.  Some historians compare the Life Guard to the Secret Service created after the assassination of President Abraham Lincoln. 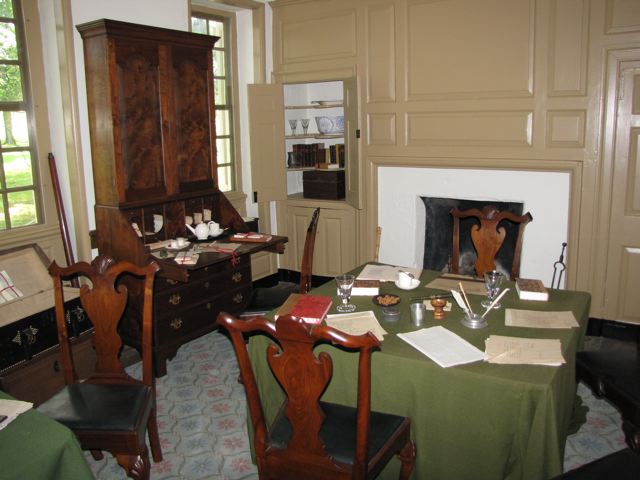 Washington's Headquarters was filled with activity and resembled a busy office as the day to day needs of the Continental Army were addressed.  The yard was filled with individuals waiting for a chance to converse with the Commander-In-Chief concerning some form of business.  The crowd was always under the watchful eye of the ever present troops of the Life Guard.  The community of Valley Forge had suffered British raids before Washington's arrival where several homes were destroyed by fire.  As a result, lodgings for officers were scare.  Some were able to rent out rooms in nearby farm houses while others built winter huts of their own.  Still others bedded down on the floor within the first floor office space where they had previously worked much of the day.  Some accounts describe men sleeping on the stairs that led to the bed chambers on the second floor to escape the outside cold. 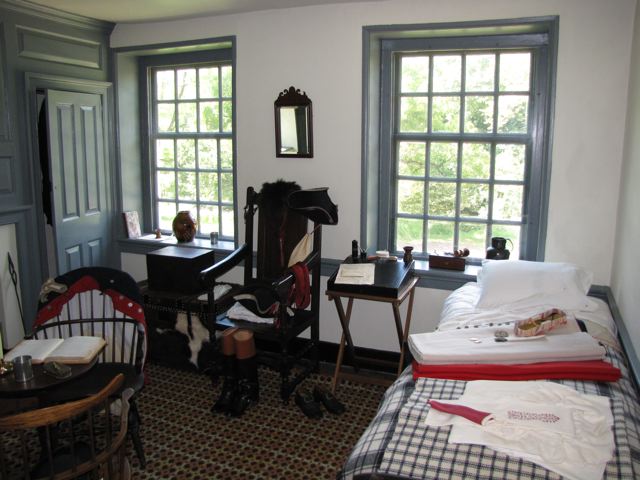 It was refreshing to be able to take pictures of the interior of a historic home for a change.  One reason for the rare privilege may be the result of the lack of an official guidebook of the site. Normally historic sites do not allow interior pictures, forcing you to purchase the official guidebook of the park at the gift shop.  This policy may change when the train station renovations are completed in late August of 2010, which is when the new visitors center at Washington's Headquarters will open.  I will bet it will most likely contain a new gift shop!  The house was guarded by a friendly Continental soldier who answered questions for us and offered a few stories.  I didn't ask him if he was a member of Washington's Life Guard although he was armed with a Pennsylvania rifle. 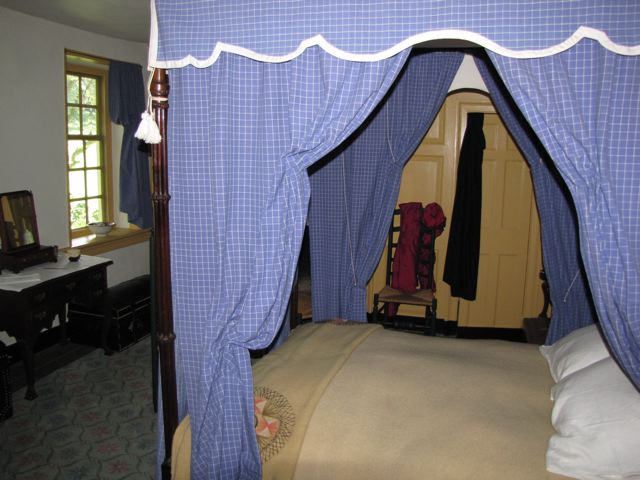 Washington's private bed chamber was small like the other rooms in the Georgian style home.  An antique four-poster bed filled the space.  This is the space where I imagined Washington pondering the weight of his fears and concerns for his fragile army in the form of many sleepless nights.  His wife Martha later arrived to spend the remaining months of winter with her husband as she had at all his winter encampments.  She arrived shortly before his 45th birthday and took command of the busy house and assisted her stress burdened spouse whenever possible. 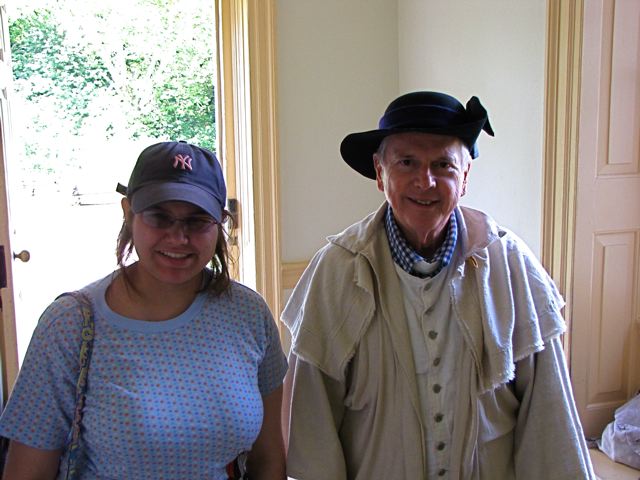 Two Faithful Continentals
-----------------------------------------------------
Sadly, the Valley Forge historic site currently faces new enemies from within.  Like many historic parks, the land ownership is fragmented between many public and private interests.  In 2001, a 62 acre plot of land within the park went up for sale and was purchased by a real estate development company for 2.5 million dollars.  Public outrage pushed the federal government to act and two years later purchased the land from the developer for an inflated price of 7.5 million dollars.  Extortion?  Disaster prevented at a price.  However in 2007, another 78 acres within the park was sold by a private land owner to a large hotel developer who had big plans for the site.  That action has been put on hold in court as lawsuits have been filed.  Can history be preserved?  See my previous blog on the Gettysburg Address published in September of 2009 to see the similar problems facing historic spaces with abundant acreage.  Hopefully, common sense and compromise will preserve our heritage. 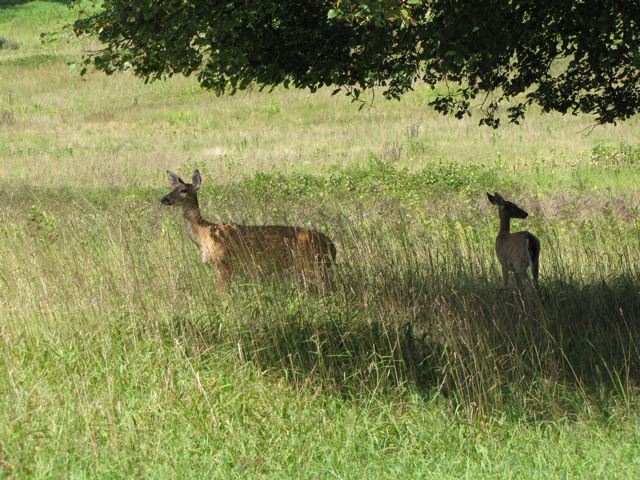 More of the Local Riff-Raff
-----------------------------------------------------
Deer were abundant in all directions and would have been a welcome site to the soldiers!  We always see them along the highway when traveling down the Pennsylvania Turnpike that parallels the park. In an effort to control the deer population a controversial winter hunt at the park was scheduled.   Park officials would like to reduce the 1300 + herd by 80 percent over the next four years.  The park cites the main reason the hunt is necessary is due to the fact that the large deer population is destroying and eliminating the natural vegetation within the park. The plan has come under attack from Animal Rights Groups who have challenged the legality of the hunt, which has postponed the plan for the time being.

Come on Katelyn, we are now off to our final stop on our tour of Valley Forge... Tune in next week for our short visit to The Washington Chapel before we hit the road home west toward Lititz, Pennsylvania.