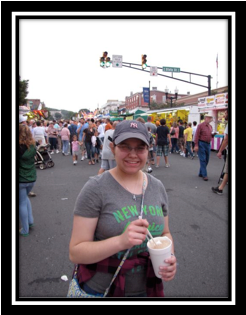 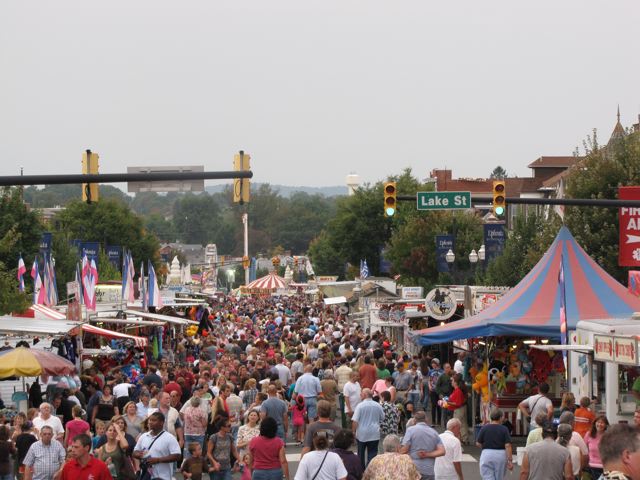 The weather is about to cool from the heat of summer and fall is just around the corner.  It's Country Fair Season and Katelyn and I are on our way to the Ephrata Fair in nearby Ephrata, Pennsylvania.  The traditional fair is a throwback to the nostalgic olden days long past. The Ephrata Fair first began after a group of World War I veterans and local businessmen formed a group to sponsor the first fair in Ephrata in 1922.  In the early days the festival was three days long and called the Ephrata's Farmer's Day Fair. Over time, the fair expanded to include rides, entertainment, a beauty pageant, and the traditional Wednesday evening parade.  Today the Ephrata Fair claims to be the largest street fair in Pennsylvania. 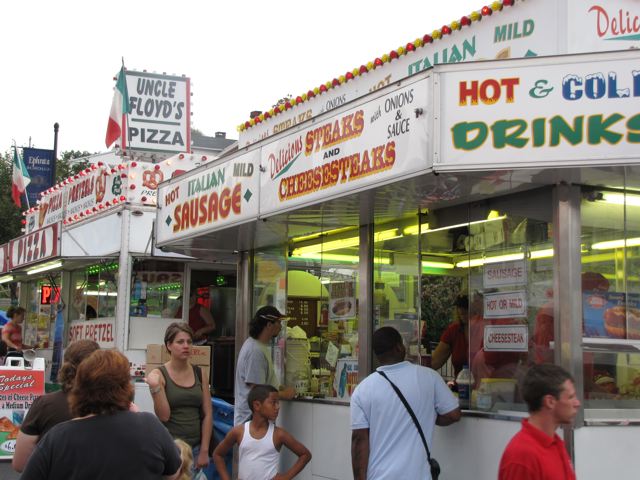 The Ephrata Fair always brings back fond memories for many of us from our childhoods.  Every year my Aunt Lois would pick my brother and I up to go see the Ephrata parade.  We would go early and hang out at my aunt's best friend's house to have a home base before heading off to the night's festivities.  My brother and I would play in Betty Haines' front yard, which had a short steep hill that was fun to roll down.  The native residents of Ephrata have fair week tactics down to a science.  They know all the short-cuts and secret places to park, and even unseen places to go to the bathroom. We always had the same spot where lawn chairs reserved the sacred spot well in advance. 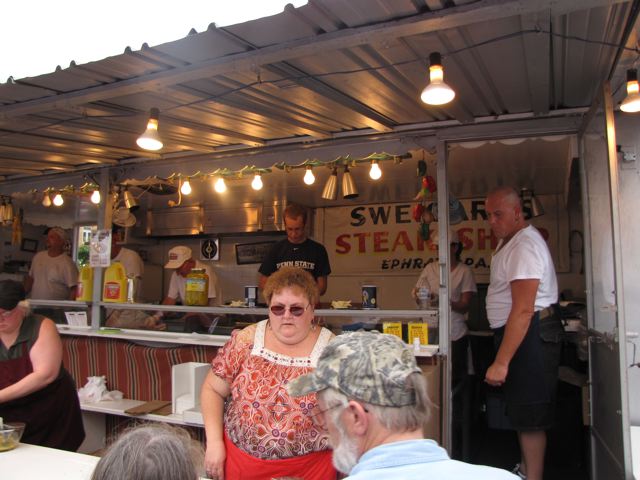 Reserving your spot for the parade is serious business and various items warn the foreign newbie to beware and keep your distance.  Anyone attempting to ignore the lawn chairs, blankets, and construction cones are putting their lives at risk!  We always had the corner with a great view of the bands, horses, tractors, veterans, politicians, beauty queens, floats, scouting groups, and flashing fire trucks.  The parade seemed to go on and on with high school marching bands evenly spaced with bass drums that echoed in your stomach as they passed by.  We always watched for our home school to pass by and my aunt would jump out of her chair to clap and cheer as the Warwick Warriors strutted past.  A lone police car with flashing lights would bring up the rear to signal the end of the parade.  Traffic seemed to bustle out in the police car's wake, jockeying for position to escape the congested main drag. 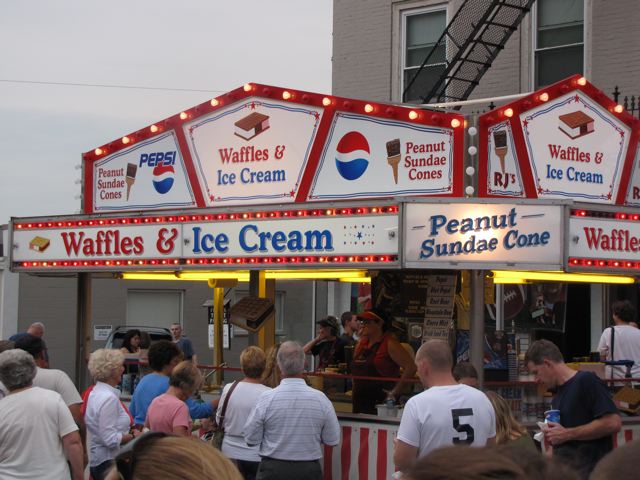 Following the parade,  people would suddenly gather up their children and lawn chairs to make their hurried exit from the their formerly defended parade spots to head home or back to the fair.  We would head down a dark alley to our getaway car and quietly sneak away with the lights off through the secret twists and turns back to the Haines' residence.  We would hang out there for about an hour until the traffic jam broke apart and gaps were exposed, opening up the routes out of town.  It was an annual pilgrimage through my high school years until college took me away from the area.  My daughter and I have rekindled the tradition, making our way to watch the parade near the end of September.  However, we first hit the Midway where one can indulge in foods and fun that can't be experienced any other time of year. 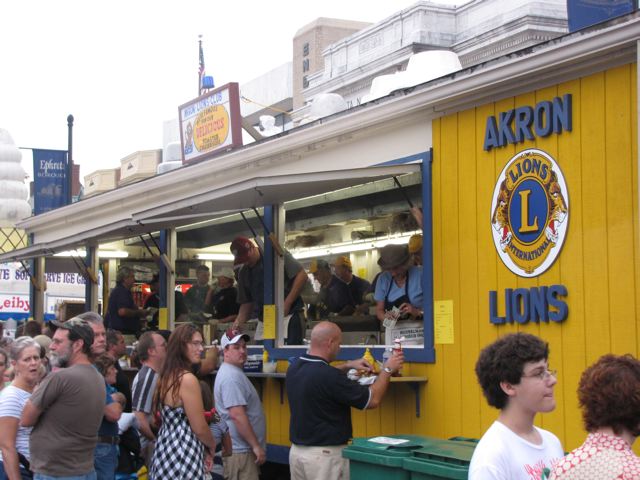 
The three best things about the Midway is the food, the food, and the food!  It is the only place in America where you can consume 3000 calories in less than an hour and still long for more!  My parents both worked in Ephrata at one time or another and became connoisseurs of fair food during the anticipated week of the Ephrata Fair.  Sweigart's Steaks were a must and they were only available during fair week.  They are still there, coming out for one week a year to the delight of their loyal patrons who come from far and near to support them.  Next, it was tradition to head to Bixler's French Fries wagon for a vegetable to accompany the steak sandwich.  And we can't forget the dairy group on the food pyramid, so you could chase all the hot food down with an Neapolitan ice cream sandwich with homemade waffles sprinkled with powdered sugar.  For your cholesterol's sake, it's probably a blessing that the fair only comes once a year. 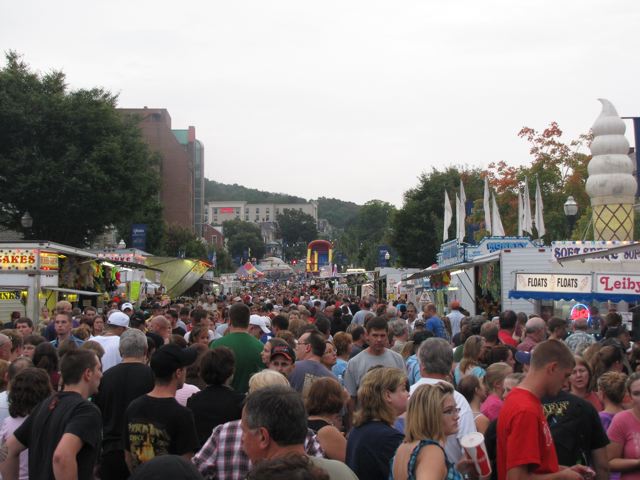 
There is something about fair food that you just can't seem to get anywhere else or at any other time of year.  Hershey Park added the Midway section to their amusement park a few years ago but the theme park version just isn't the same.  The food at the Green Dragon Farmer's Market a few miles away is a distant second but that's another story for another day.  The crowds appear after 5 PM and the Midway swells with hungry visitors who crave a deep fried toasted cheeseburger from the crowded Lion's Club stand.  Another fan favorite is the Italian sausage sandwich loaded with buttery peppers and onions on a freshly baked roll.  Getting hungry yet?  When I went away to college at Bloomsburg University, I was pleased to discover that they had their own annual fair.  I couldn't come home to the fair so the fair sort of came to visit me.  It was a huge event where even the local schools would close for the entire week so kids of all ages could enjoy the festivities.  Wow! 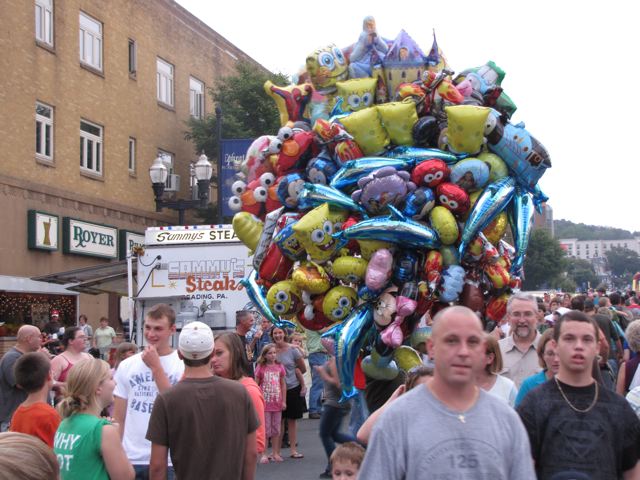 The fair was great fun but it wasn't without it's stresses and challenges.  The line of stands beckoning games of chance were the gauntlet every kid had to navigate through at some point.  The week just wasn't complete without winning a prize and winning the big stuffed animal could make a kid's childhood complete.  It didn't matter how much allowance was on the line, you had to win something to carry home as a trophy of conquest from the Midway.  You couldn't help but be pulled in by the prizes dangling from the ceiling and sides of each stand.  All one would have to do, is defy the Laws of Physics, and you could walk off with treasure!  Darts were my game one-year and when the balloon popped and the hidden prize tag revealed a big stuffed dolphin, I was king for the rest of the week! It ranks right up there with graduating from college, my wedding, and the birth of my two kids!  It was quite an accomplishment!  Again... Wow! 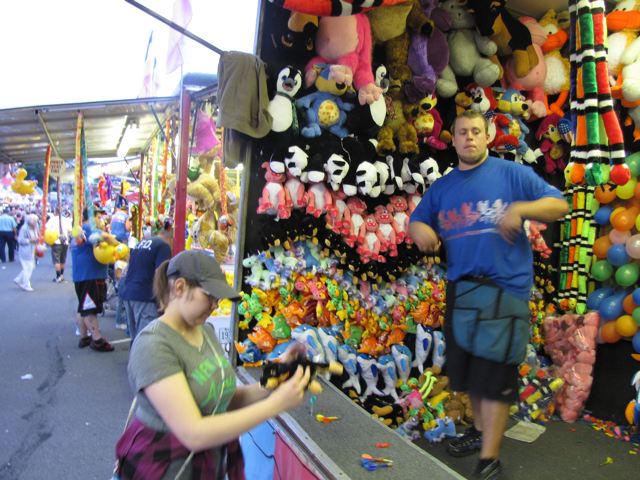 
The only forbidden game (Parent Law) was the goldfish stand where a ping pong ball in the fishbowl would equate to a living prize you would have to carry around in a plastic bag the rest of the night.  It was an easy win but would most likely be dead by the next morning leading to feelings of guilt, remorse, and an internal debate on the meaning of life itself.  On this night, Katelyn's game also seemed to be darts as she won a small puppy to add to her extensive stuffed animal collection.  Next year I may allow her to play and trade up until she gets the top prize level.  Even though we could buy it at a store for one tenth of the price, there is something special about winning the big prize using your God-given talents!  I now understand why my brother kills animals in the woods and then mounts them on the walls of his home.  It comes down to our primal instincts and personal honor.  Ok, enough about games, time for a funnel cake with heaping mounds of white powdered sugar!  You're drooling... aren't you? 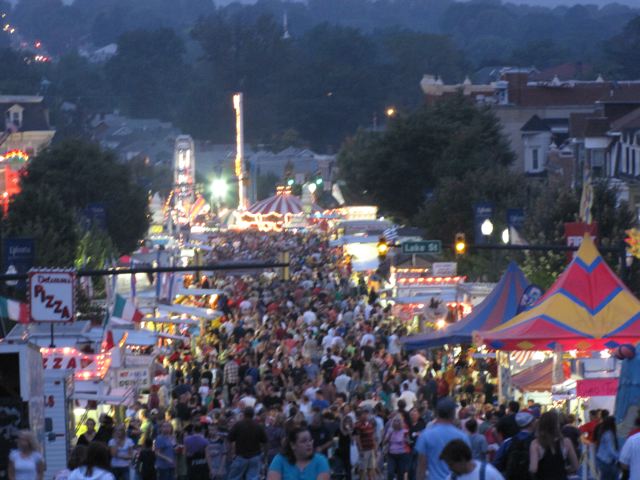 The Descent of Night


Well, the night was approaching and Katelyn and I were off to stake out a safe spot to watch the Wednesday night parade.  We were able to find an opening on a corner street just like Aunt Lois saved for my brother and I over 30 years ago.  Thankfully, the parade hasn't changed much over the years and the Rajah Shrine Temple Band from Reading, Pennsylvania still makes their appearance every year. The only downside to our evening of fun and food was that it was a school night and we were both starting to yawn.  Soon the police cruiser's lights were visible on the sides of nearby houses and we quickly rose with everyone else to scramble back to our cars.  As we were stuck in traffic for about an hour I longed for the comfort and refuge of Betty Haines' house. 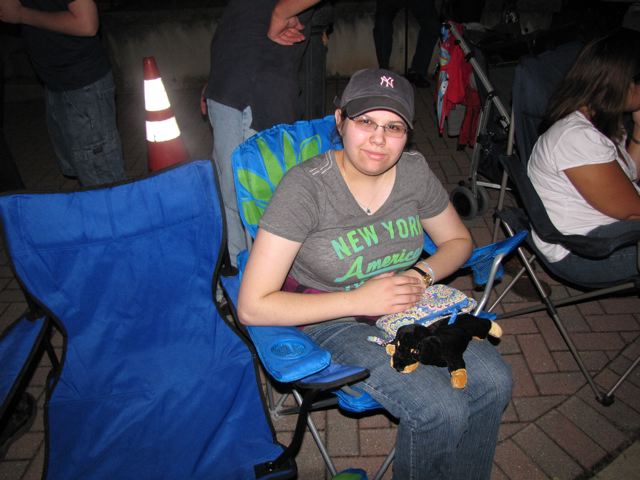 Thanks for helping create the memory Aunt Lois! I think of you every time we go to the fair, especially during the parade, when the Warwick band passes by and we jump out of our chairs to clap and cheer!


Posted by Camp Martin Travels at 5:20 AM