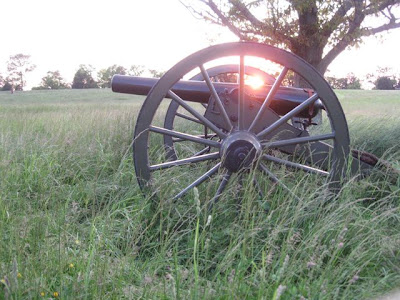 The Battle of New Market / Virginia 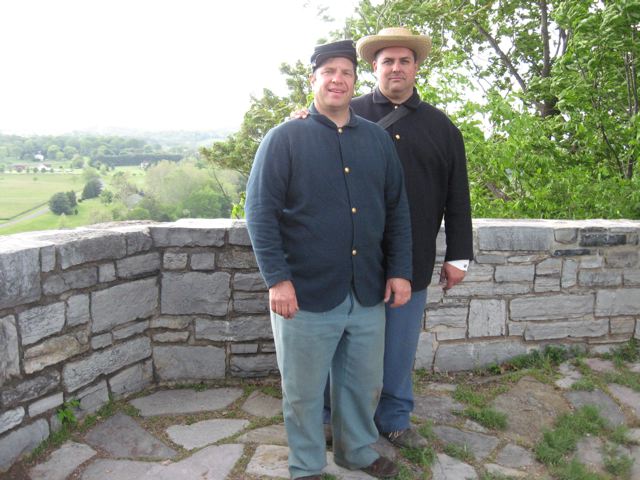 Pvt. E. Hartmann / Pvt. J. Martin
-----------------------------------------------------
In this episode of Camp Martin Travels we are going off to war!  Pack your bags and say goodbye to your sweethearts (for the weekend) because the Union must be preserved!  My good friend and fellow teaching colleague Ed Hartmann and I were about to pack up the wagon (SUV) and head south to face Johnny Reb in the Shenandoah Valley of Virginia, the land of Jefferson Davis and the Confederacy!  This was my second trip down south to reenact the Battle of New Market, originally fought on May 15, 1864.  Ed and I had some rations for breakfast (Burger King) and jumped on the Pennsylvania Turnpike and headed down yonder way to face our treasonous foe. 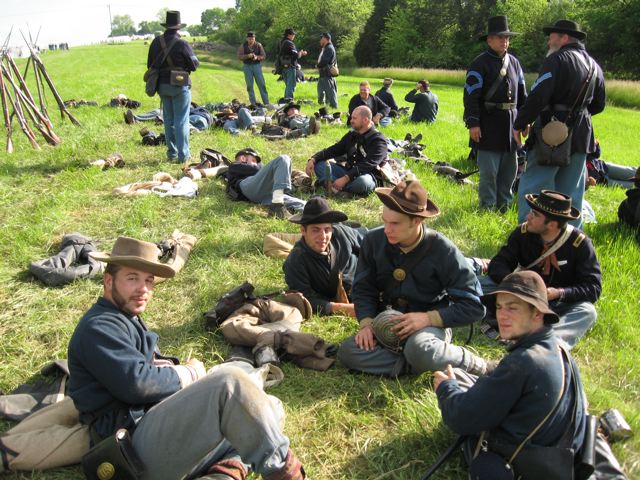 The Campaigners
-----------------------------------------------------
The Shenandoah Valley is a beautiful place and it was easy to see why the South fought so hard to keep it.  Ed and I arrived and pitched our tents along with our fellow Pa 30th brothers on the tent street assigned to our brigade.  The weekend event would include two reenacted battle engagements, one of which would portray the original script from 1864.  The first battle on Saturday is called a skirmish where both sides try to out flank and maneuver around one-another like a chess match.  The important thing is... at the end of the day both sides can claim a landslide victory since there is no official ruling on a winner or loser.  The North totally dominated... high fives all around!  The second battle on Sunday is the scripted battle to recreate the conflict as it unfolded in May of 1864.  So we needed to have fun on Saturday because we knew we were going to lose on Sunday just like every year since the actual battle took place. 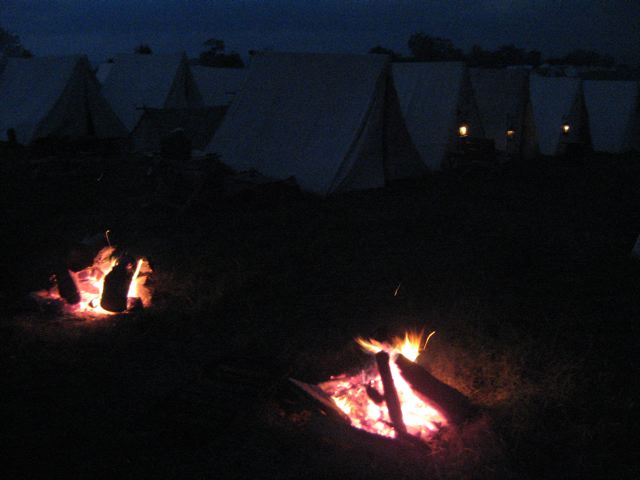 The Remains of the Day
-----------------------------------------------------
During the encampment we all try to recreate history and be as authentic as possible, eating foods from the time period and cooking over an open fire.  One of the best times is after the crowds of spectators leave and darkness rolls in where stories are told around the fire and songs from long ago come back to life.  There are several types of infantry soldiers in attendance.  First you have groups called the Campaigners who basically carry all their gear, to advance to a predetermined location as quickly as possible.  They travel light and often sleep on the ground under the stars with wool blankets for cover.  Most soldiers arrived this way to any particular destination while a baggage train slowly trailed behind with the bulk of the heavy gear.  Campaigners can often be identified at a reenactment by the blanket roll slung over their shoulder. 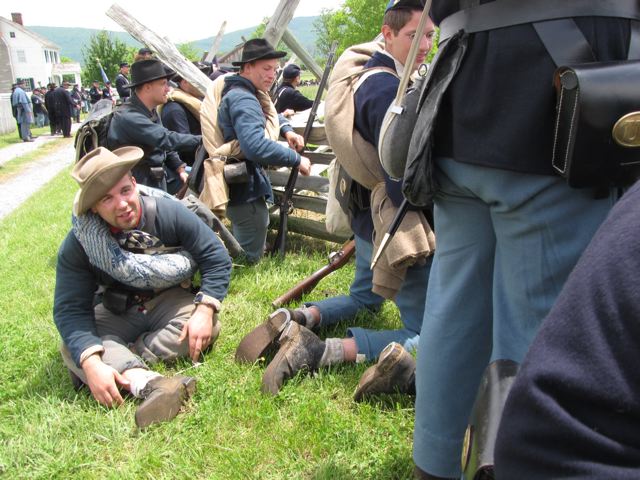 Awaiting the Enemy at the Fence Line
-----------------------------------------------------
Other soldiers carried what was called a shelter half, a small piece of thick canvas that could be buttoned to another soldiers to form what was known as a dog tent.  This would shelter two men from the rain while on the move.  When the army stopped at a spot in which they planned to stay for a while, they would set up a more permanent camp with larger canvas tents called A-frame tents that were assembled in straight rows called streets.  Each man was responsible for cooking his own food with a small frying pan that also served as a plate.  Several soldiers shared a common fire and worked together to maintain it by supplying wood.  This seasoned wood was often found within the nearest farmer's fence.  The army was often not a very popular guest as foraging parties were sent to secure needed supplies from civilians in the area. 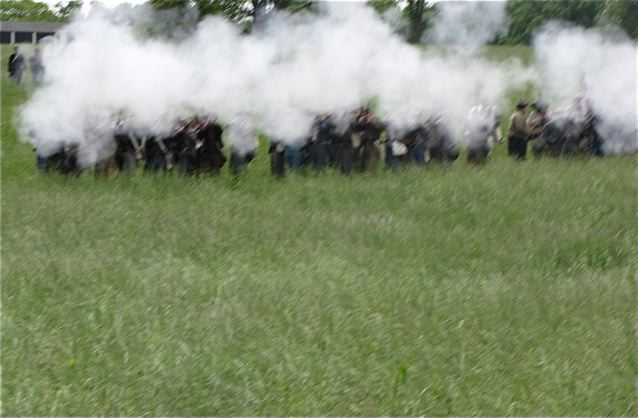 Johnny Reb Advances
-----------------------------------------------------
I have been in many living history encampments but this was my first actual battle reenactment.  The previous year I was still a newbie and sat on the sidelines during Sunday's battle to get a feel for how the process worked.  One of the most frequent questions people ask is... How do you know who gets shot?  The easy answer is when you run out of ammo or when you get tired.  Then it is time to fall down in the tall grass and take a hit!  Few people fall in the early stages of the battle because a lot of people drove long distances to attend and they want to get their time in the field.  Some participants in our brigade drove from Maine to attend and wanted to make the most of their investment of time and travel.  Reenacting on the field is quite a workout!  The equipment is heavy, including the wool clothing, rifle, full canteen, brogan shoes, and leather belts.  The total weight of the combined gear is about 50 pounds.  The battle is fast moving and you wind up jogging up and down hills over several hundred yards for over an hour.  I'd like to see fitness guru Richard Simmons try it!  However, he's so annoying he would probably be shot by his own men before the battle even started!  Ouch! 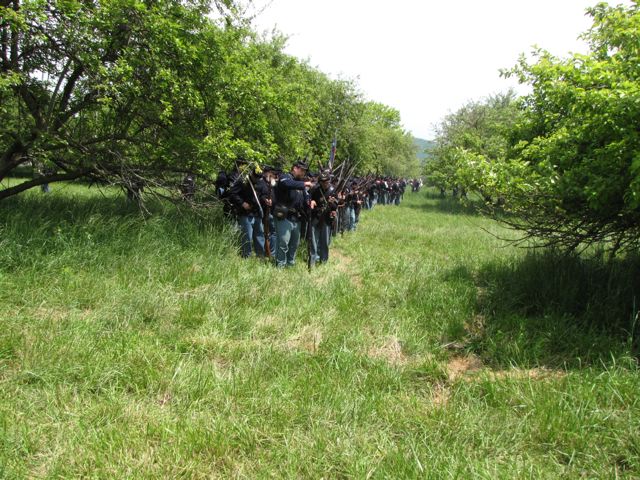 Retreat and Reform / Orchard
-----------------------------------------------------
Now back to the reenactment... Waiting by the field fence was much like the real thing... experiencing feelings of uneasy anticipation and excitement at the same time.  A phrase my father often parroted from his days in the army came to mind... Hurry up and wait! We sat there for about a half hour peering across the long field waiting for the enemy to make their appearance.  Since this battle was located in the south and was a Confederate victory... The enemy forces in attendance promised to be very high.  The Union on the other hand... well we were going to lose any way.  A line of color suddenly appeared on the horizon and was moving slowly toward us... Still we sat by the fence without movement or instructions... Hurry up and wait and wait and wait!  Within ten minutes the earth-tone colors came into focus and hundreds of rebel soldiers were upon us... Our line quickly came to life following orders that were barked down the line. 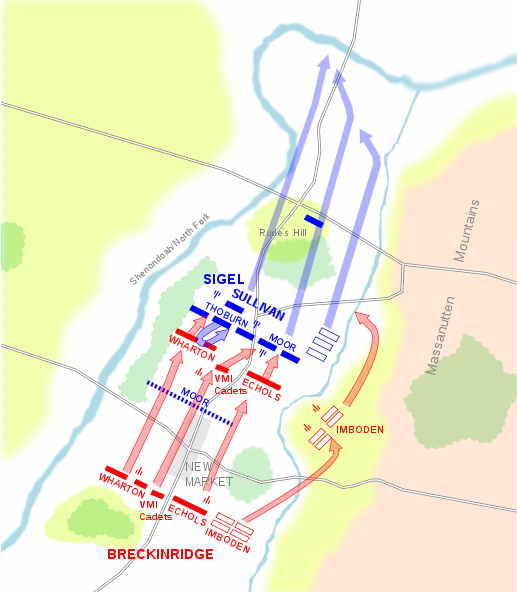 In the actual battle, the Union was determined to secure the fertile land in the Shenandoah Valley and put pressure on Lee's army that was tangled with Grant. The Battle of New Market would be the beginning of the Valley Campaigns of 1864.  Major General Franz Sigel with 6,000+ troops advanced into New Market, Virginia to threaten the Confederate forces nearby.  Confederate General John C. Breckenridge gathered all available troops to defend the area including 257 young cadets from the Virginia Military Institute (VMI) to be used in reserve as a last resort.  However, Union artillery punched holes in the Confederate center and Sigel recognized the opportunity and ordered a charge at the disorganized gap in the line.  Breckenridge had to fill the gap in the line or abandon the field to the Union. 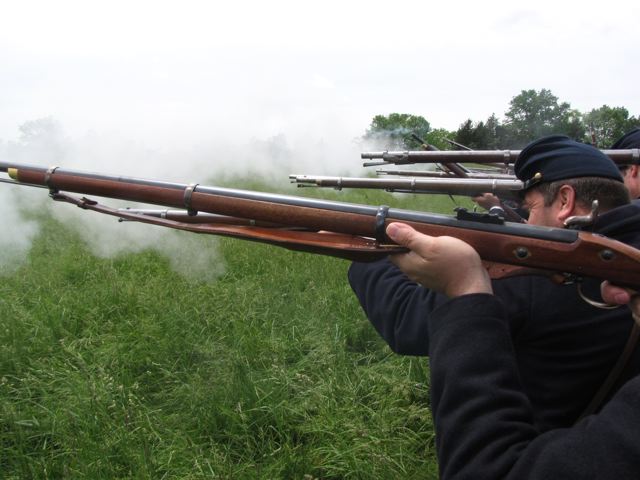 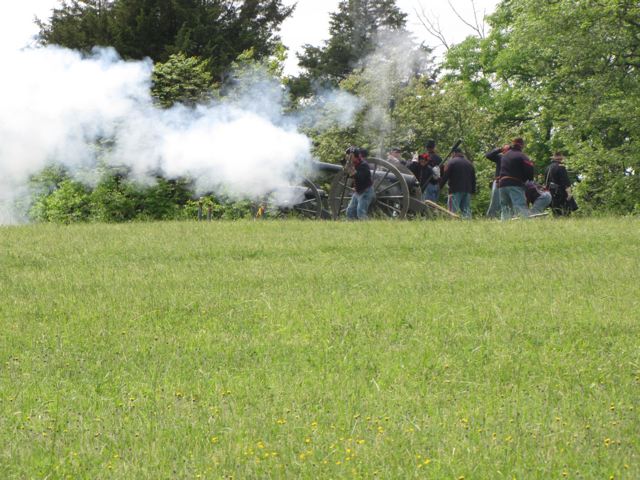 Union Artillery Support
-----------------------------------------------------
Now we were about to reenact the historical description noted above.  All of our drilling and marching in preparation for the event now came into good use as the regiments moved across the field as a single smooth well trained unit.  We stood fast and fired volley after volley at the approaching enemy.  However, we were quickly overrun and fell back (according to the historical script) and took refuge in the orchard on the Bushong farm that became the geographical center of the battlefield. There we fired again and again... sometimes as a unit and other times at will.  My Enfield musket barrel was hot to the touch and I was beginning to run out of ammo and energy. 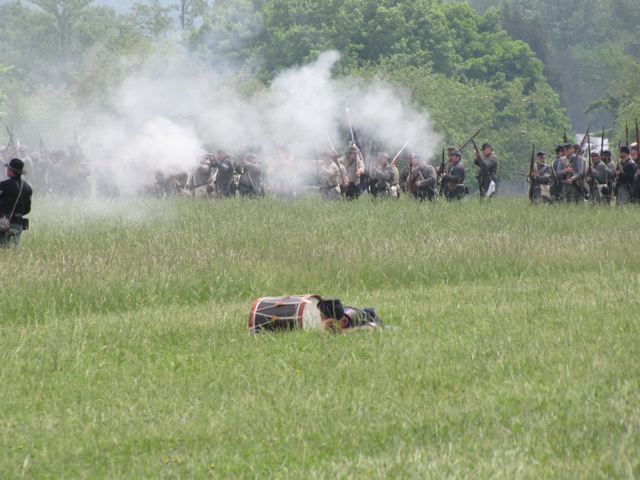 -----------------------------------------------------
I really wanted to get some pictures so I had hidden my camera inside my haversack enabling me to get all these images.  I was taking a shot with my musket and then taking another shot with my camera.  I was almost out of ammo and was now completely out of breath.  I had lost Ed somewhere in the orchard and decided to take a hit falling at the back of the orchard.  However, I realized that I was in the enemy territory of the south and did not want to become a prisoner of war.  Some of the rebel reenactors looked a little psycho and might not remember we were only pretending. I picked up my gear and worked my way to the sideline and then back where it was safe with the Union generals and artillery units located to the rear of the action. 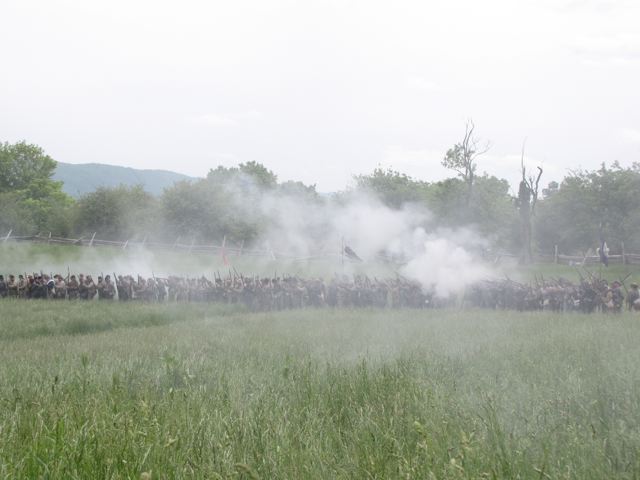 VMI Cadets Merge with the Line
-----------------------------------------------------
The rear position gave me the best view of the final few minutes of action as I could watch the historical script play itself out before me.  The battle suddenly ended when a VMI reenactor climbed the captured cannon and waved the VMI flag in victory. The crowd of several thousand spectators cheered the end of action.  Both units headed back to camp to tear down the streets of canvas and prepare for the long ride home.  The Battle of New Market is a rare opportunity for reenactors because the battle actually takes place on the original battlefield.  Most recreated battles are not performed on the sacred, hallowed ground of the fallen.  It was a fun and exciting weekend with good friends and old historical foes.  I plan on making it an annual pilgrimage... even though we will lose every year! 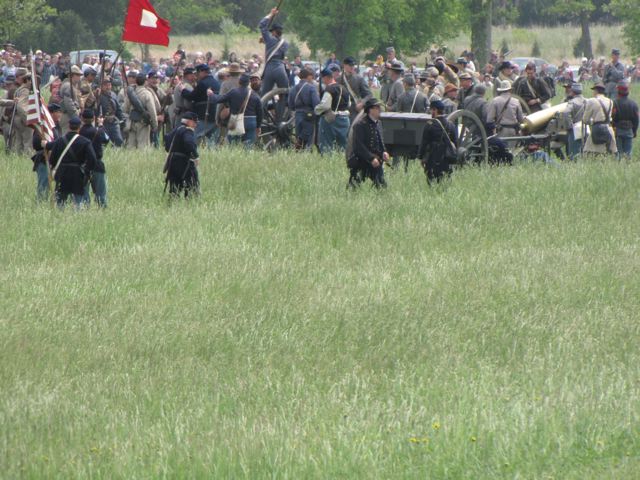 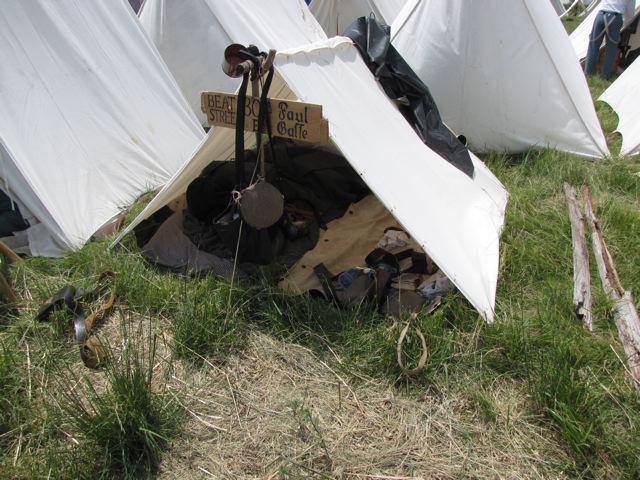