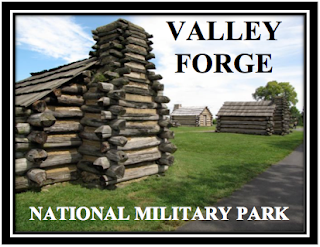 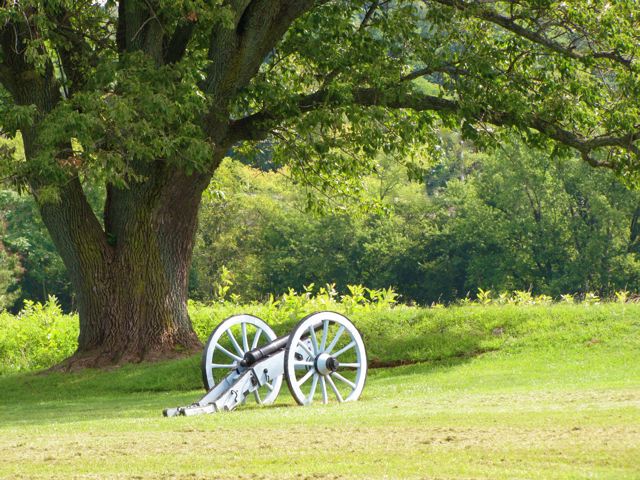 Cannon Behind Earthworks
-----------------------------------------------------
Following the British victory at the Battle of Brandywine, the doorway to the city of Philadelphia was wide open and British occupation of the city was inevitable. The Continental Congress moved out as the Redcoats approached and made their way west to safety in Lancaster, Pennsylvania.  General William Howe and the British troops under his command entered the city in September of 1777 and made preparations to settle in for a long winter's nap. Washington was determined to retake the city by force and looked for a place to camp nearby that was close enough to keep an eye on General Howe and friends and yet be well-protected at the same time. 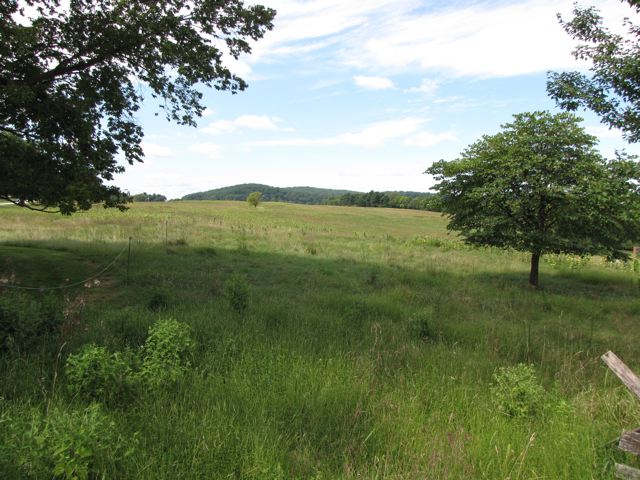 Soldier Field of Encampment
-----------------------------------------------------
Washington found himself in a familiar position... on the outside looking in.  The British had been able to occupy the cities of Boston, New York, and now Philadelphia as winter approached year after year.  The war came to a standstill with the approaching cold weather and once again, the British would be well provisioned and warm until spring in their urban fortress.  Washington was ever hopeful that the tables could be turned and chose a spot about twenty-two miles from his adversary.  Washington and Howe had played cat and mouse throughout the war and here they were once again within each others grasp.  Washington and his men arrived at Valley Forge a few days before Christmas with few provisions.  Two days later six inches of snow fell upon the weary men. 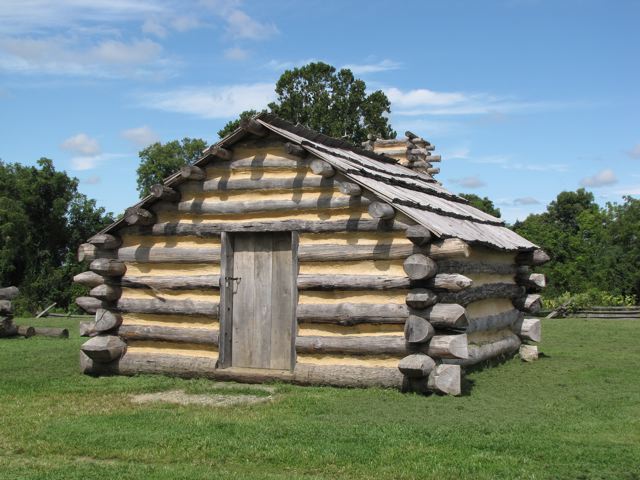 Reconstructed Winter Hut
-----------------------------------------------------
The men constructed a quick tent city and went about gathering any available supplies.  Washington gave the order for the immediate construction of winter huts to shield his troops from the elements.  The specifications for identical cabins were set and the plan was laid for an organized military encampment.  Washington refused to take up residence in a nearby house until all the men had adequate quarters of their own and pitched his tent along side his men until the last hut was completed.  It was actions like this that enabled his men to believe in him and follow him into hardship.  No one had more to lose than a wealthy landowner like Washington who risked all he had for the cause that brought them together in this cold and barren place. 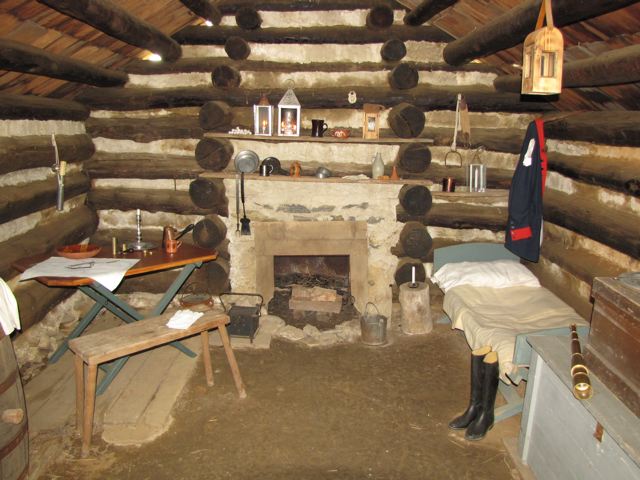 Officer's Hut / Inside View
-----------------------------------------------------
Over 2,000 huts were constructed with a dozen men taking up residence within each one, sharing everything inside including one set of cookware and eating utensils.  Clothing was so scarce that the men were forced to share, combining their individual garments together into one complete outfit for those assigned to outside duty.  The huts were outfitted with homemade pieces of crude wooden furniture including rows of bunk-beds that ran the length of each wall.  A rough-hewn fireplace and chimney were added to provide an interior heat source. The men did the best with what they had and prepared for an ordeal that one out of every four would not survive. 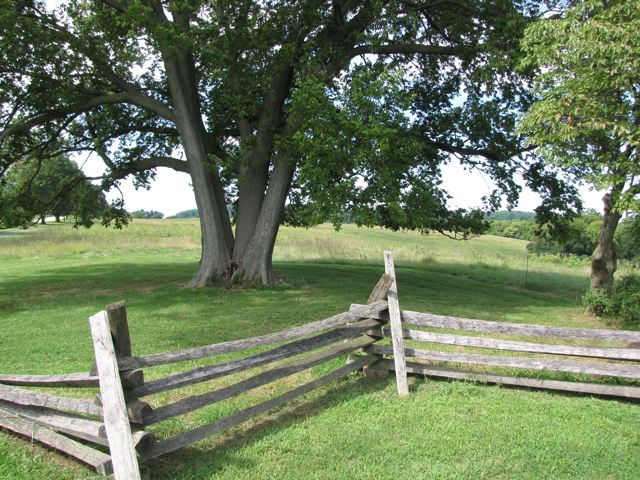 The Barren Country
-----------------------------------------------------
Valley Forge was easy to defend against a possible British attack but the site was isolated far from supply sources in what was described as barren country.  Feeding an army of 11,000 men was a constant hardship with the camp consuming 35,000 pounds of meat and 60 barrels of flour every day.  Men were organized into foraging parties to go into the countryside to procure (steal) supplies by whatever means came to hand.  Washington carried the heavy weight of the burden his men were facing but needed to conceal the dire conditions from the outside world fearing the British would see an opportunity.  Congress was slow to respond thinking the descriptions were exaggerated.  Finally several congressmen traveled to the camp and were appalled by the hardships they witnessed.  Over 2,000 of the men were without the simple necessity of shoes. 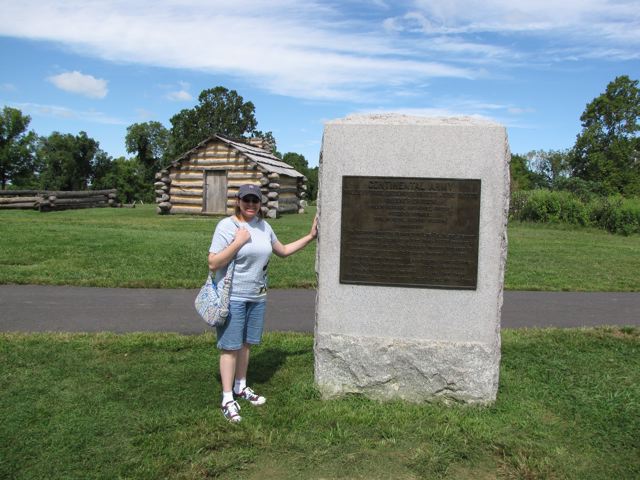 Continental Army Monument
-----------------------------------------------------
Most of Washington's troops were young men ages seventeen to twenty-one who were earning a pay of eight dollars a month.  Most could not afford to buy the small bread pies nearby sutlers were selling for two dollars each.  Price gouging was another hardship confronting the soldiers but rare comforts were hard to resist come payday.  Most hoped for a care package from home that might arrive with the one camp order all men valued most... mail call! 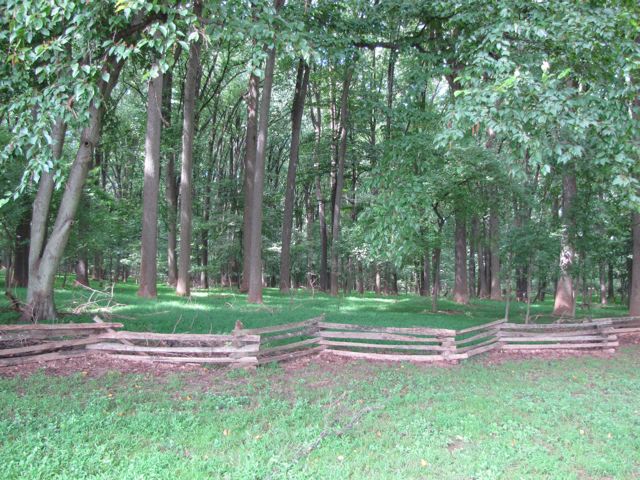 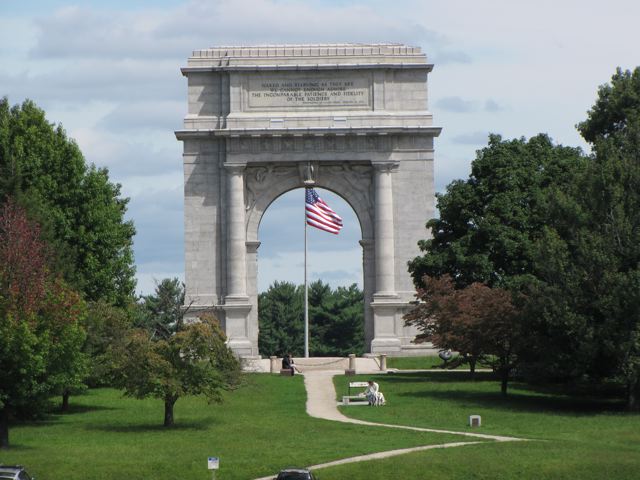 Main Central Monument
-----------------------------------------------------
Finally, Washington placed one of his top generals in charge of reorganizing and improving supply lines for the army.  Nathanael Greene was not pleased with the assignment of Quartermaster General of the Continental Army but had the mind and skills to make the plan bear fruit.  He redesigned the entire inefficient system and as spring approached, conditions began to improve.  In time, Greene would gain the reputation as Washington's most valued general and would be awarded command of the southern campaign where so many previous Continental officers had failed.  His ability to organize and carry out strategic plans of action were instrumental in American victories in the Carolinas and the eventual defeat of British General Lord Charles Cornwallis at Yorktown. 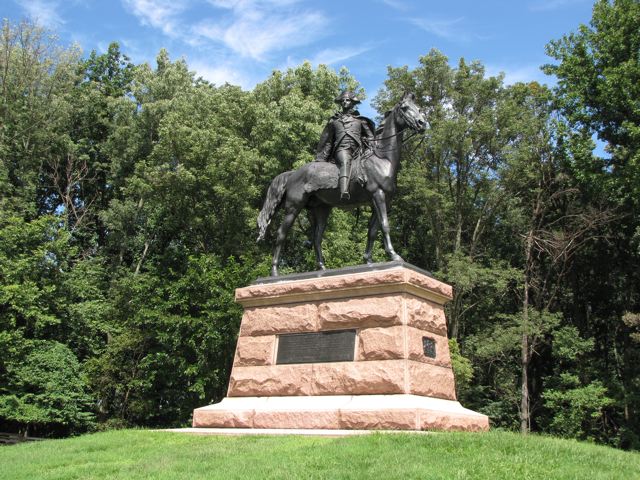 General "Mad Anthony" Wayne
-----------------------------------------------------
A grand statue of General Wayne sits upon a grassy knoll where his likeness faces his home in nearby Chester County.  Wayne was a great asset to Greene who helped replace lost soldiers and acquire stores of clothing for the men.  Another bright spot was the arrival of a Prussian drill sergeant who had been sent by Ben Franklin to help the cause.  Friedrich Von Steuben arrived in camp and went to work training the inexperienced troops in European tactics and formations.  He spoke little English but was helped by Alexander Hamilton and Nathanael Greene who translated his barked commands. Von Steuben cursed the men through methodical drills day after day but they grew to love the foreign born drillmaster.  He served without pay and seemed as committed as anyone for the cause of liberty.  Von Steuben's fellow countrymen, the Hessians were fighting for the enemy as rented soldiers.  The men of the Continental Army practiced bayonet charges and slowly the rag-tag army began to transform itself into a professional fighting force. 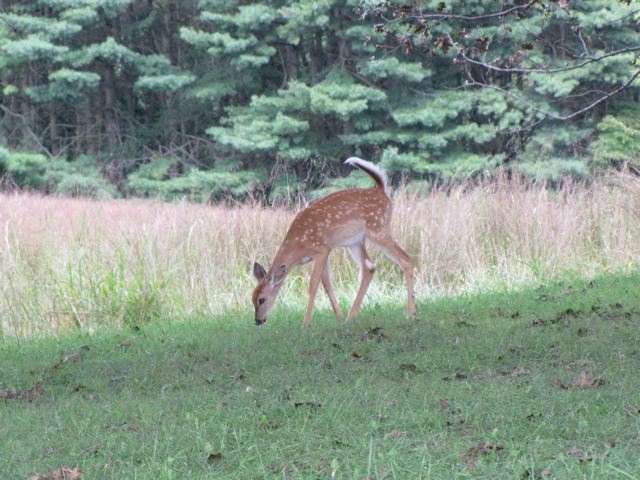 The Wild Locals
-----------------------------------------------------
In the end, the Continental Army faced one of their greatest challenges of the war. Enduring the extreme winter elements of Mother Nature, an enemy they never anticipated facing.  They suffered terrible losses but emerged in the spring, as a more efficient and better-trained unit.  The skills developed at Valley Forge would serve the men well as they lived on to fight another day and eventually as they traveled down the road to victory. At Yorktown, they would face the British with the bayonet, the weapon they once feared most, and beat them at their own game.  It would be the last major battle of the war.

Katelyn and I found the entire site well maintained and a pleasure to tour.  It was a beautiful warm sunny day and a stark contrast to the barren cold that confronted the soldiers long ago. Next, we are off to visit Washington's headquarters down the road.  Let's go!