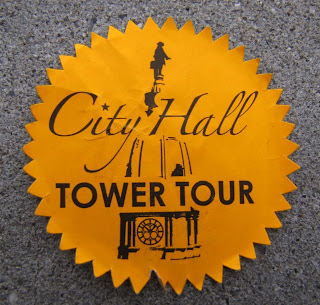 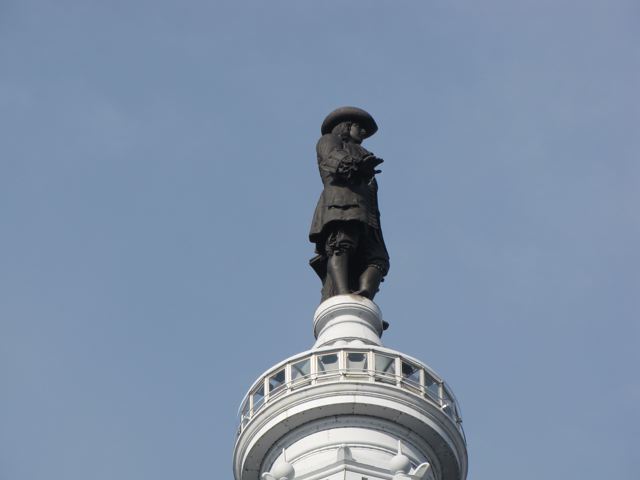 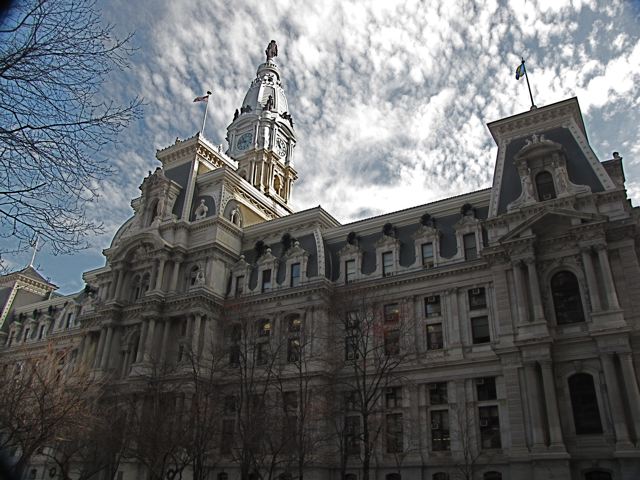 Penn Tower / City Hall
-----------------------------------------------------
There were police officers coming and going from the evidence and courtrooms inside.  One pointed me to a side office doorway in one of the entrance tunnels to see about a tower tour.  There was a desk with a sign taped to the front advertising tours of the tower.  I had no idea what this actually meant or what I would be able to see.  The tour cost me five-dollars and I had to walk to the tower tour entrance on one of the upper floors by exiting to the outside of City Hall.  It took me about fifteen minutes to make my way through the maze of twists and turns to the elevator.  I got on the elevator to the seventh floor with two police officers.  I suddenly realized how much of a dork I must have looked like with my backpack on, my camera hanging around my neck and a bright orange tour sticker (see above) on my chest!  Can you say... TOURIST? 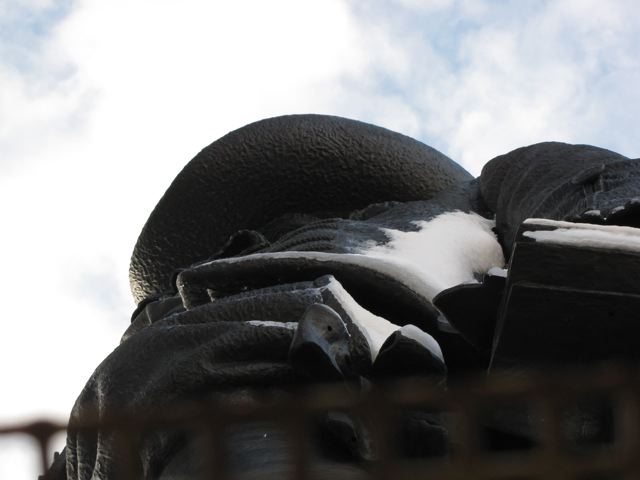 William Penn Above my Head
-----------------------------------------------------
The expressions of the officers were enough to confirm my worst fears and I was sure some derogatory comment at my expense soon followed their exit off the elevator on one of the lower floors.  Yeah, I looked like a dork but I would never see those guys again so on to the five-dollar tour!  I followed a red line on the floor to the tour waiting area.  As I walked the hallways the age of the old building was showing.  I finally ended up at the waiting room and opened the door to peer inside at how many people would be joining me on my tour.  Guess what... 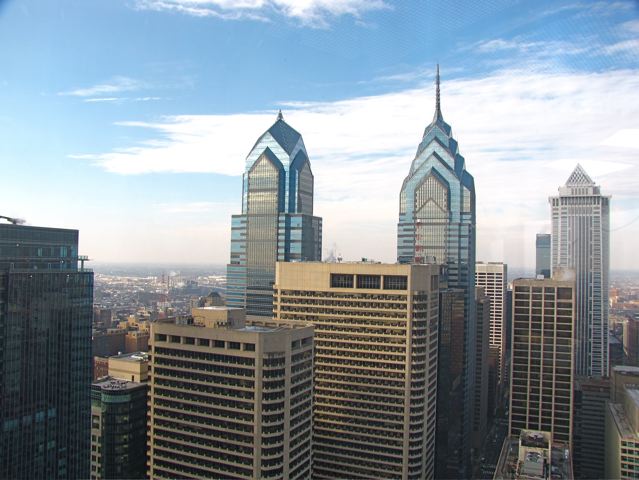 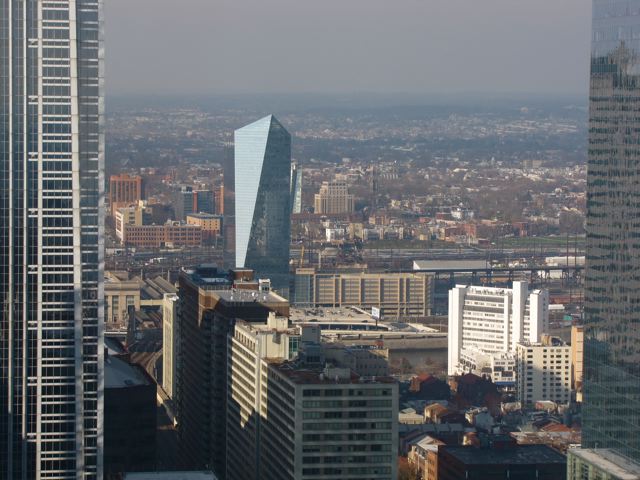 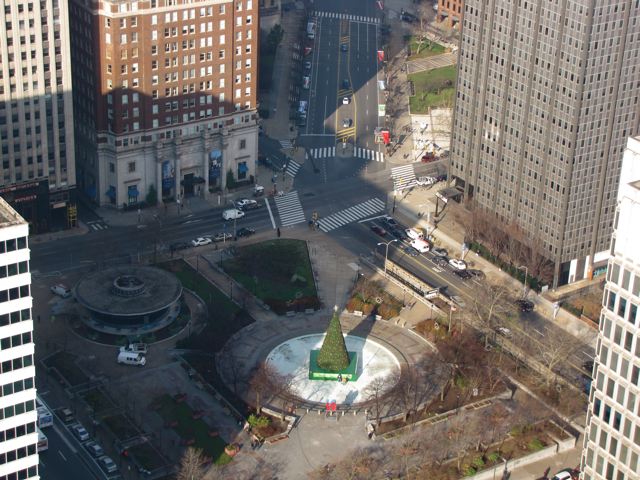 The Decorated Square Below
-----------------------------------------------------
I stepped out onto the observation deck to take in the visual landscape spread out across the horizon.  The guard never followed and I was alone on top of the City of Brotherly Love.  It was strangely silent as I was enclosed in glass.  The ceiling above was a combination of glass and iron open grates and William Penn stood tall in his famous stance above me.  It had snowed the night before and snow and ice covered parts of the towering statue. 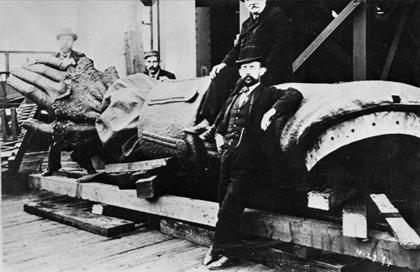 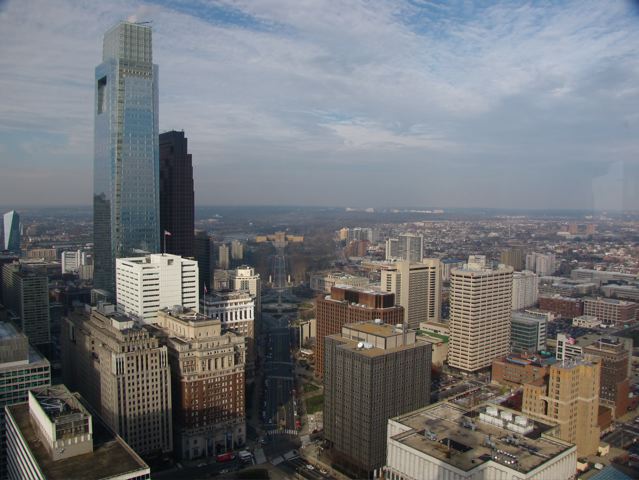 Philadelphia Art Museum / Distance
-----------------------------------------------------
I was in the dead center of the city, positioned in the middle of the compass rose of Philadelphia.  The city streets shot out in all directions at organized angles as I encircled the small deck to capture every possible view.  The sky was hazy to the south where the oil refineries steamed in the far reaches of my line of sight.  The silence was occasionally broken by loud crashes without warning that caused me to jump.  Large chunks of ice were falling off the hat and shoulders of the statue and crashing down on the grates and glass above.  The sun had recently come out to light up the cold and gray skies just in time for my fifteen-minute window enabling me to take some nice pictures of the view. 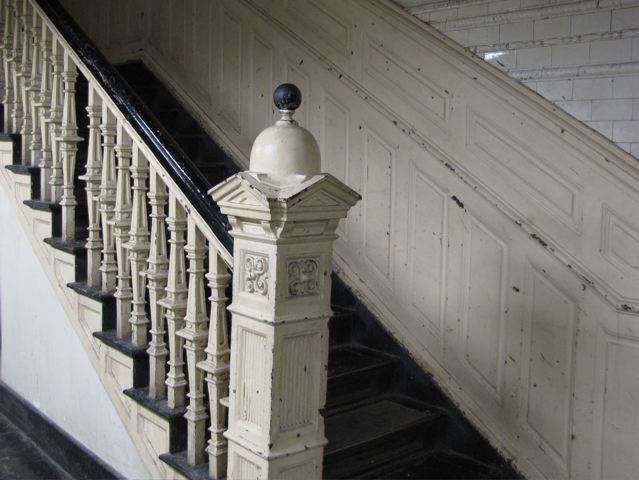 Original Interior Stairwell
-----------------------------------------------------
Soon my fifteen minutes were up when my city companion appeared in the gap of the tower.  He turned out to be a really nice guy who worked security for the mayor.  I asked him if he ever got tired of the view and he informed me that the tower tour guide position was rotated daily through the security detail of the Mayor's Office.  I thanked him and then worked my way down through the maze of hallways and corridors to the ground level of City Hall.  I captured a few images of the interior of the aging monument.  The iron stairwell above seemed to resemble some lost space aboard the Titanic. Hopefully funding can continue to be reserved to keep the Marble Elephant alive for the future sightseers (dorks) like me. 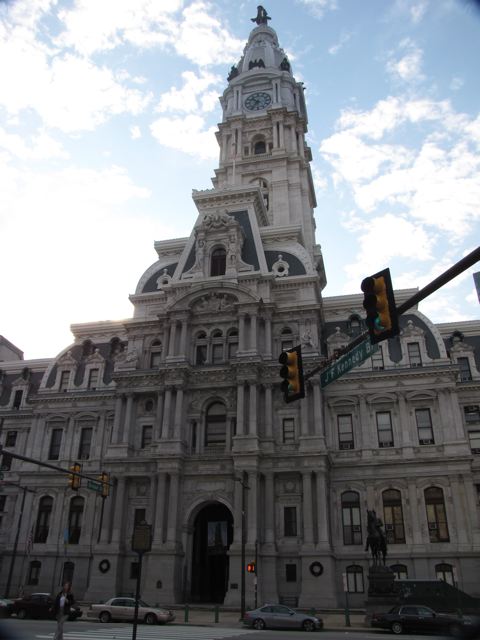 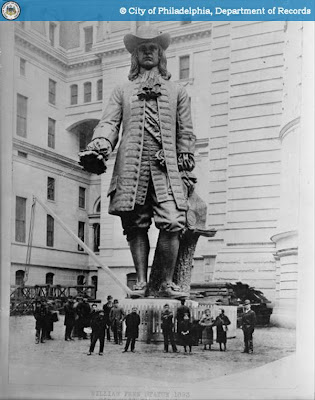 Did You Know: The Penn Statue designed by Alexander Milne Calder sat within the interior courtyard for one year until it was lifted into its final resting position on top of the tower of City Hall. 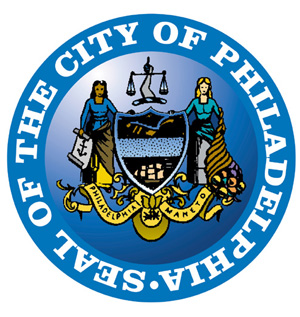