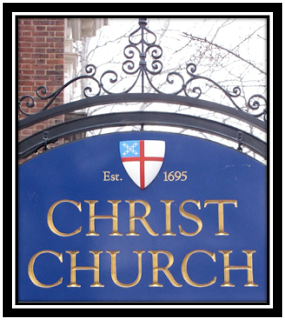 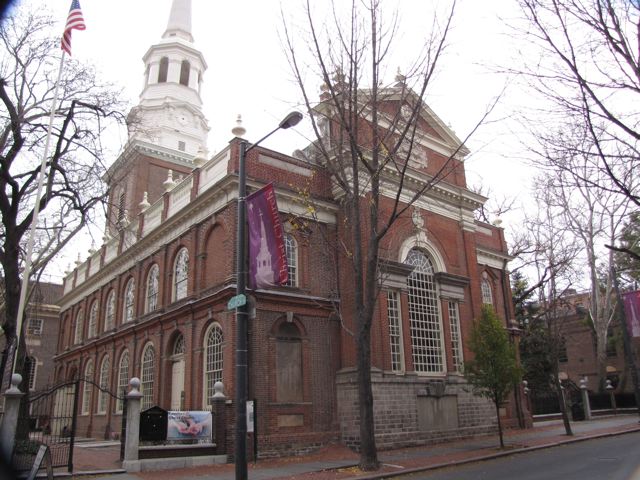 Christ Church / North 3rd Street
-----------------------------------------------------
Today we are going to pay a visit to one of Philadelphia's most sacred landmarks.  A place where most of the Founding Fathers came together to put political differences aside for one day of the week. The Second Continental Congress attended as a whole in 1775-1776.  They came to sit quietly together in the presence of a higher power and may have prayed for guidance and perhaps, forgiveness.  Many came from distant places and may have been filled with private thoughts of their loved ones.  There is something special about the space and silence that exists within a structure built for worship.  The church today is a balance between religious services of an active congregation and public tours of the historic landmark visited by over 250,000 people a year.  Let's explore Christ Church and the abundant history contained inside. 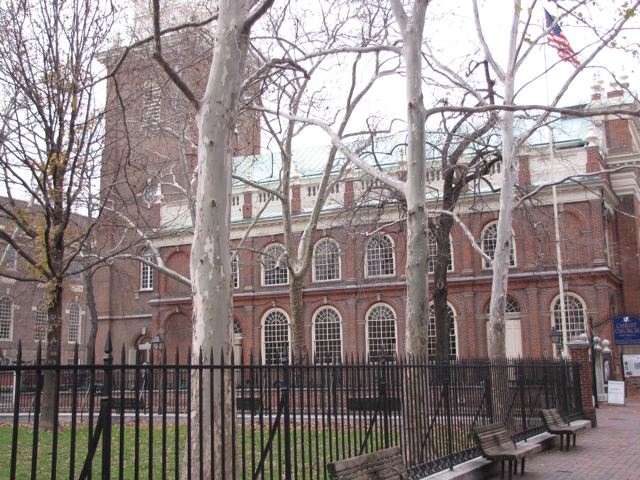 Churchyard / North 3rd Street
-----------------------------------------------------
The church first started as a small wooden structure in 1695 among the many Quaker meetinghouses that dominated the city's early landscape.  The current church building was built on the same location in 1727 to serve the growing community.  Christ Church was the first Anglican Church (Church of England) in Pennsylvania.  Some of the famous individuals who attended services here include George Washington, Ben Franklin, John Adams, Robert Morris, Dr. Benjamin Rush, Betsy Ross, and occasionally Thomas Jefferson. As a result, the Georgian style building is often called The Nation's Church and is one of the ten most visited places in Philadelphia.  It is ironic that many of the statesmen debating the future of the colonies affiliation to the mother country were worshiping at the King's church when in Philadelphia. 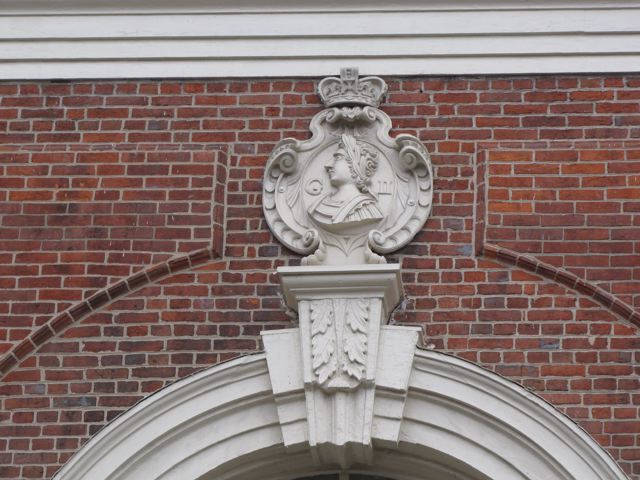 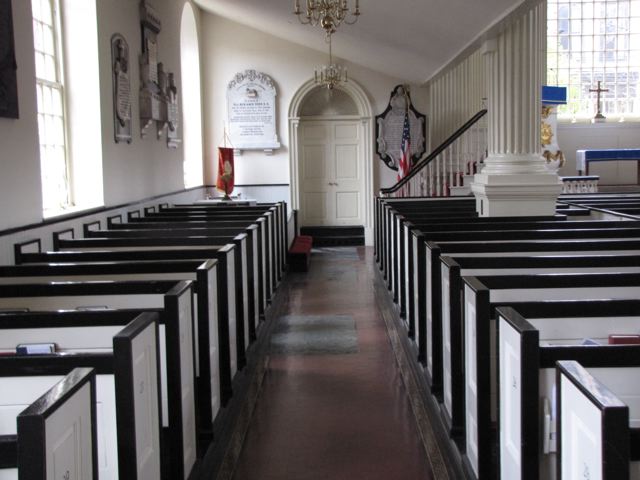 The Episcopalian Church
-----------------------------------------------------
Following the American Revolution the church needed to change with the times in order to survive.  The rector of the church at the time, Bishop William White, led a movement to reinvent the parish as the first Protestant Episcopal Church in America.  Unlike the other Anglican ministers, White supported the revolution and served as Chaplin to the Continental Congress and United States Senate.  White was known more for his charitable works for the city of Philadelphia than for his skills as a religious speaker.  He founded the Pennsylvania School for the Deaf, founded a school for African American and Native American children in the city, created ministries for local public prisons, and was well remembered for his selfless efforts during the yellow fever outbreaks of the 1790's, remaining in the city to tend to the sick.  Bishop White served the church for fifty-seven years.  Following his death, he was honorably buried within the church yard. 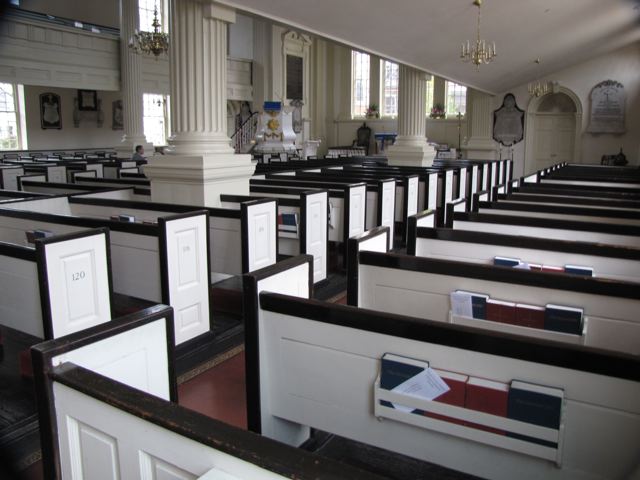 Christ Church Sanctuary
-----------------------------------------------------
The space within a church or any other place of worship is a capsule of humanity.  Since the building's birth, the walls of the church have housed the beginnings of life and the ends of life for parishioners who attended.  For many of us, religious ceremonies are the bookends of the story of our lives.  This is a place where many of us also mark the milestones of our lives... including baptisms, christenings, and weddings.  It is a container of private personal thoughts and prayers where people silently voice their inner most fears, concerns, and positive hopes for another day.  It is a place of light when the outside world is dark, providing comfort within walls of strength and solitude. 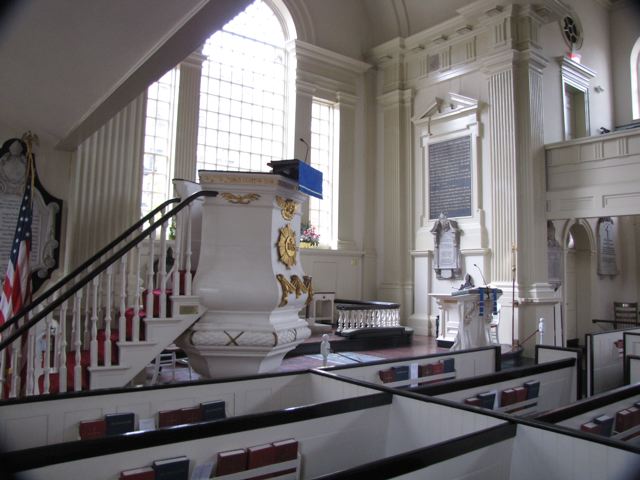 The Pulpit and Baptismal Front
-----------------------------------------------------
The current raised pulpit was built in 1769 and is still used in weekly services every Sunday morning.  One of the historical centerpieces was given to the church from across the Atlantic.  The baptismal font dates back to the 1300's and was donated by the All Hallows-by-the-Tower church in London that was attended and financially supported by the Penn family. This church gets its name from the fact it is so close to the Tower of London and a few who were executed at the famous prison are buried in the nearby churchyard.  This is the church in where William Penn was first baptized in 1644 and the baptismal font used in this service is now used to baptize Philadelphia's children of Christ Church's congregation. 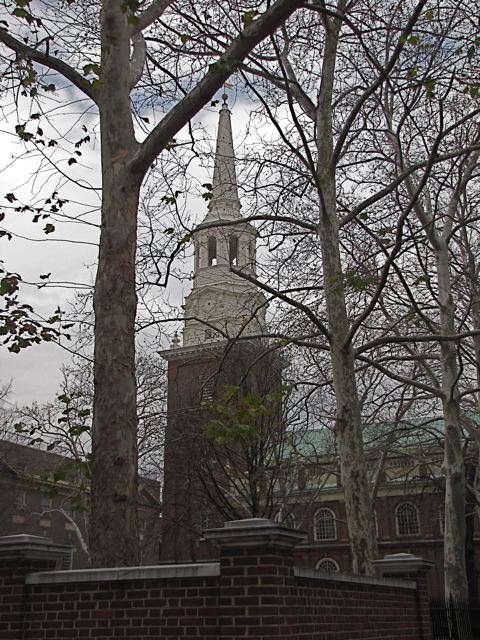 The Tower and Steeple 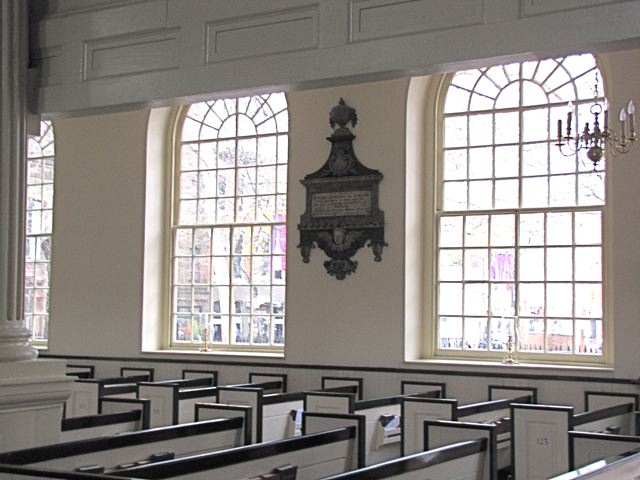 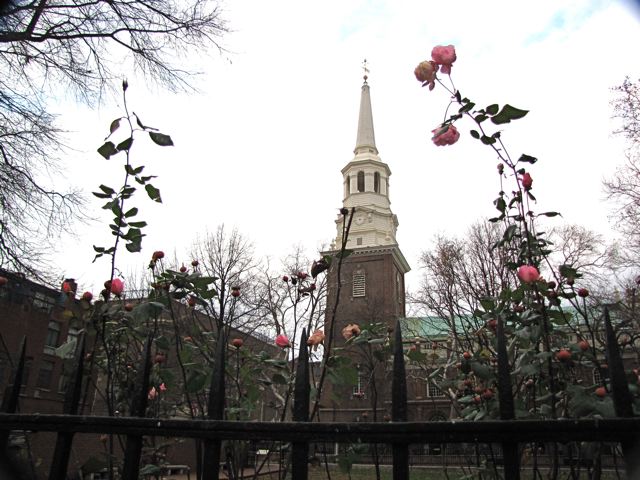 Governor John Penn - Grandson of William Penn who served as Governor and Proprietor of Pennsylvania until the American Revolution began in 1776.

Jacob Broom - Member of the Continental Congress and Signer of the United States Constitution from Wilmington, Delaware.  He died while visiting Philadelphia on business.

Major General Henry Lee - Military Leader of the Continental Army who was later removed from command (court-martial) by Washington for disobeying orders and insubordination.

Robert Morris Jr. - Member of the Continental Congress, Signer of the Declaration of Independence, Signer of the United States Constitution, and one of Pennsylvania's first two senators.

James Wilson - Member of the Continental Congress, Signer of the Declaration of Independence, and Signer of the United States Constitution.  He died in 1796 while visiting a friend in N. Carolina but was later re-interred in 1906 within Christ Churchyard.  There is no place like home!


Note: Other important Philadelphians including Benjamin Franklin and family are buried at the Christ Church Cemetery one block west of the church. 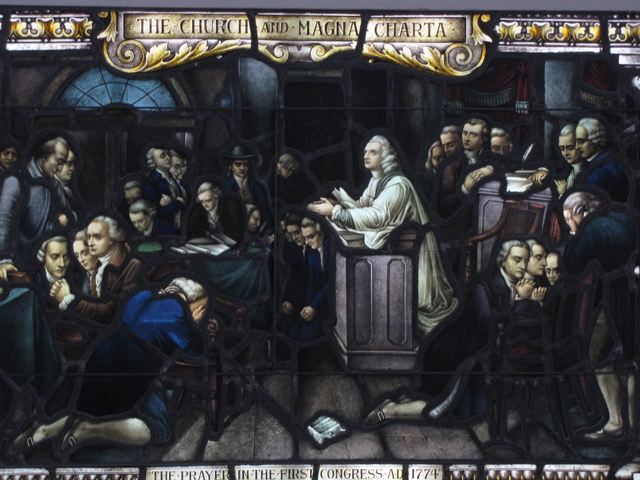 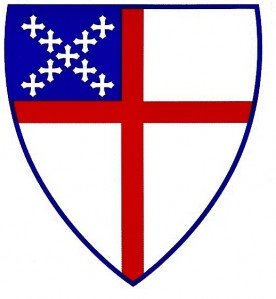 Posted by Camp Martin Travels at 5:30 AM