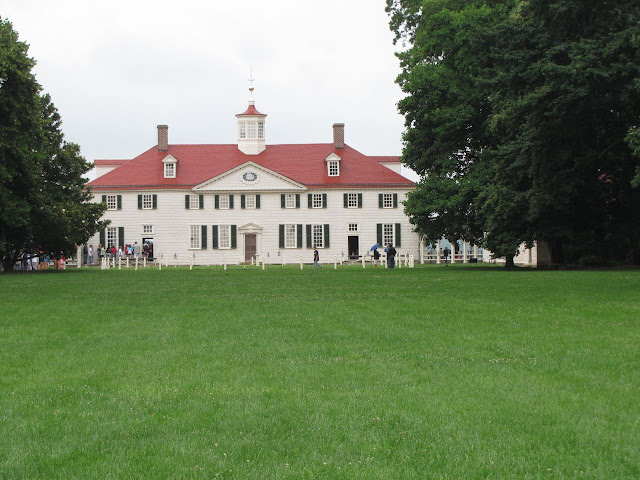 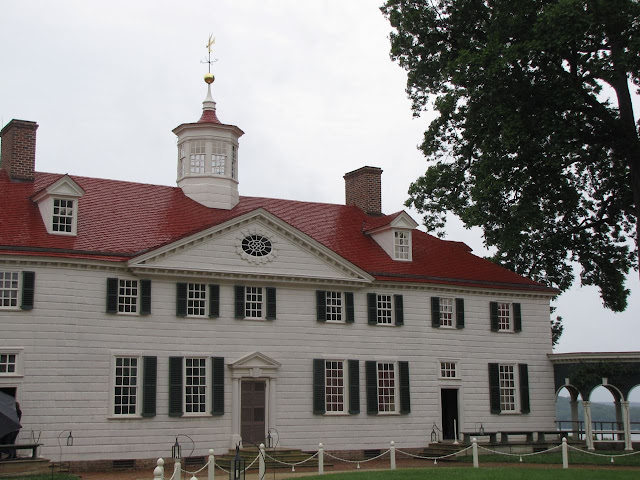 Mount Vernon Mansion
--------------------------------------------------
Mount Vernon was a constant work in progress and George Washington oversaw the property's evolution into a grand Georgian style estate modeled after those found in Europe. During the war he corresponded frequently with his cousin and friend Lund Washington who ran the day-to-day operations of the estate in his absence. His letters gave instructions concerning various expansion and construction projects, as well as the agricultural production of the five farms surrounding Mount Vernon. One cannot ignore the fact that the man who was leading the movement to overthrow British control of the colonies had so much to lose if the cause was lost. His willingness to risk and potentially sacrifice everything he had in the name of liberty, certainly inspired others to risk their own possessions for political freedom. 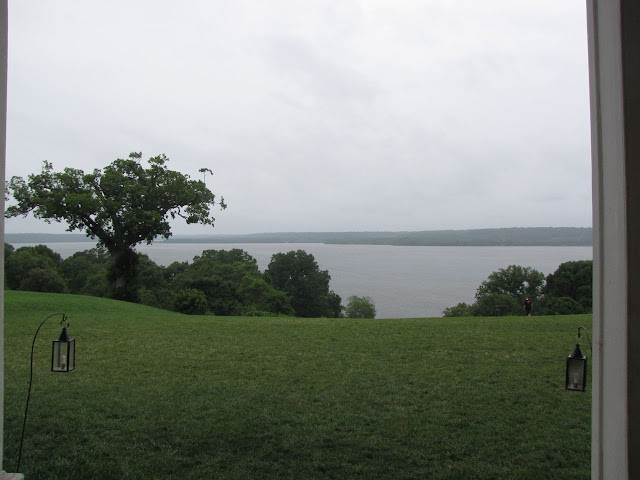 View of the Potomac
--------------------------------------------------
Later, he was pulled away again to serve as the nation's first president moving to an apartment in the nation's capital at that time, New York City. As he worked to unite the young nation and avoid conflict with foreign governments he realized from his own personal experience in New York that a new, more centrally located national capital was needed to anchor the northern and southern states. The District of Columbia would later be created as a keystone capital city that would geographically join the north and south and help unite the United States of America. Nearing the conclusion of his second term as president, Washington decided to retire from public life and return to the home he had managed and built from a distance. He felt he had done more than his fair share by serving as general and then president, sacrificing 16 years of his life for the nation. The country had progressed well under his watch and was off to a good start, his goals were accomplished, and he stepped out. He had finally returned to the role of citizen farmer where he concentrated on agricultural science and techniques. 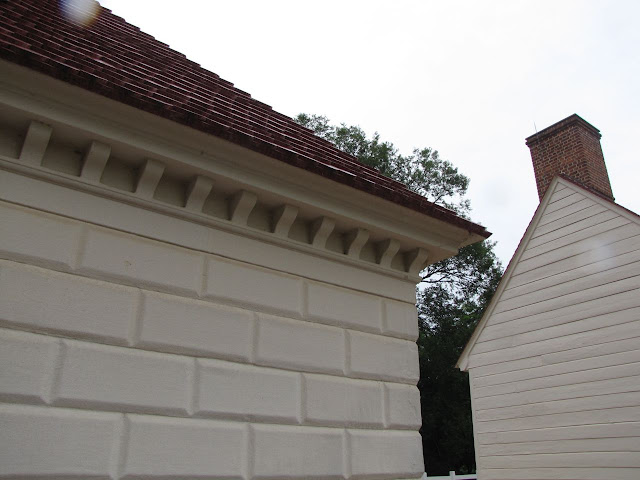 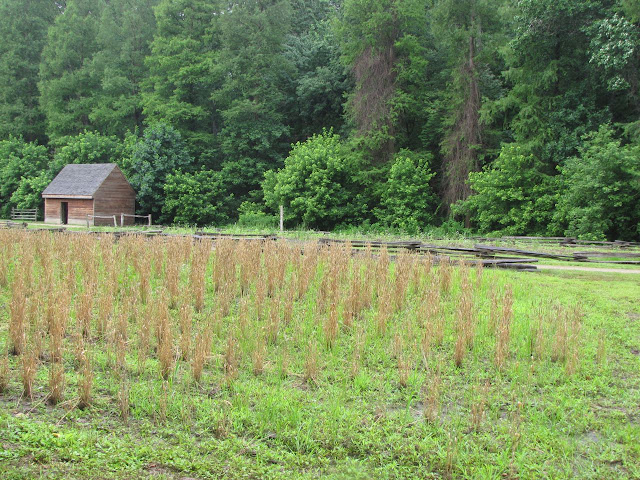 Washington's Wheat Farm
--------------------------------------------------
George Washington retired to Mount Vernon and lived out the final years of his life on his estate which was constantly filled with visitors, friends, and family. He spent his time experimenting with new crop rotations and new farming techniques. He is often considered a pioneer in the field of agriculture, as he was concerned with the environmental impact on the land. He felt traditional methods would destroy the fertile land and sought new methods to preserve the land for future crops and generations. Unfortunately, his stay at Mount Vernon was once again brief as he died a short two years later of pneumonia following a tour of his fields on a cold day in driving sleet and rain. 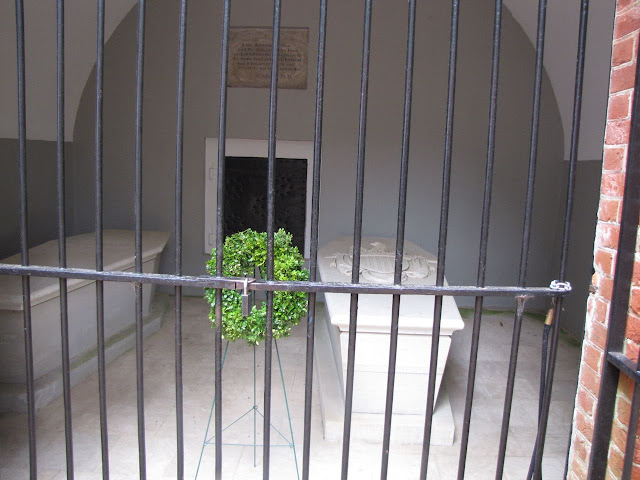 Washington Family Tomb
--------------------------------------------------
Washington's tomb is on the grounds a short distant from the house in a quiet wooded space. The current tomb replaced the family structure that had previously deteriorated in 1831 and contains the bodies of George, Martha, and other family members. A short distance away is an area that was designated as a burial place for the many African-American slaves and free blacks that worked on the plantations. All slave plots are unmarked and no records were maintained of the names or the number of people buried in this wooded section of the property. A pathway has been constructed through the area ending in a small circular monument in their honor. 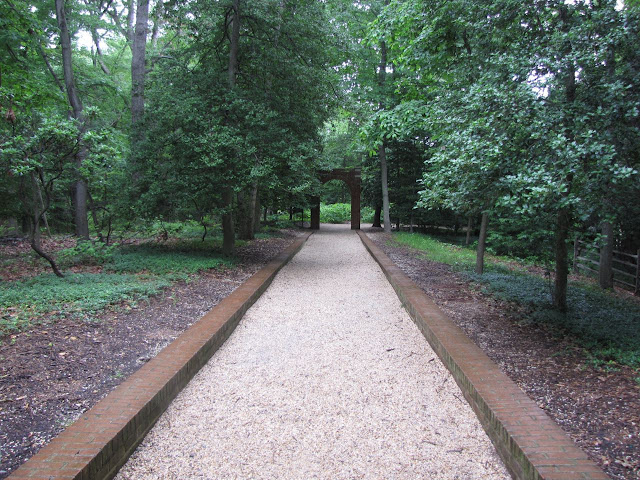 Restored Slave Cemetery
--------------------------------------------------
This space also contains the remains of Billy Lee Washington who was George Washington's personal slave servant and constant companion. He is the only slave to be openly freed in Washington's will where it is also noted he was awarded a pension of $30 a month for life and the option to live on the grounds of Mount Vernon, which he did until his death sometime around 1828. Despite his importance in Washington's life... accompanying him on campaign during the war, his presidency in New York, and retirement at Mount Vernon... he is also buried in an unknown, unmarked location within the slave cemetery hillside.  Sadly, the one man who probably knew Washington best remained silent as he was never interviewed to have his thoughts and perceptions recorded for history. 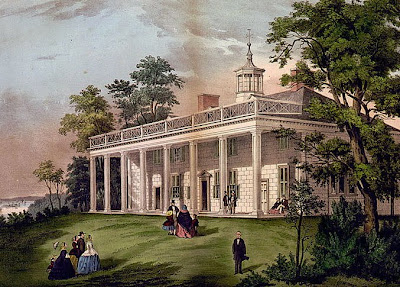 Mount Vernon Estate
Source: Lithograph / The Granger Collection
--------------------------------------------------
The interior of the house is off limits to cameras, which is probably an incentive for you to buy the guidebook at the gift shop... which, I did. By the way, it is an excellent resource and I highly recommend it! The house is filled with very bright colors, some which might be described today as gaudy. In some rooms the walls and woodwork are painted all the same color, with only the ceiling standing out in contrast in bright white. My favorite room of the house was the first room you see on the tour, which is the large dining room. This multipurpose room is painted various shades of green (Washington's favorite color) with intricate white plaster stencil designs framing multiple angles and edges throughout the room. 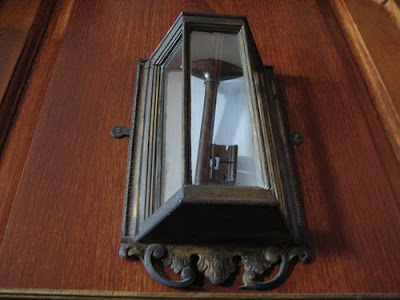 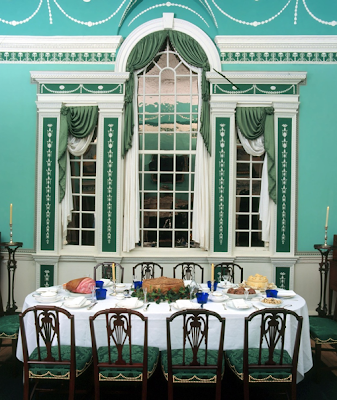 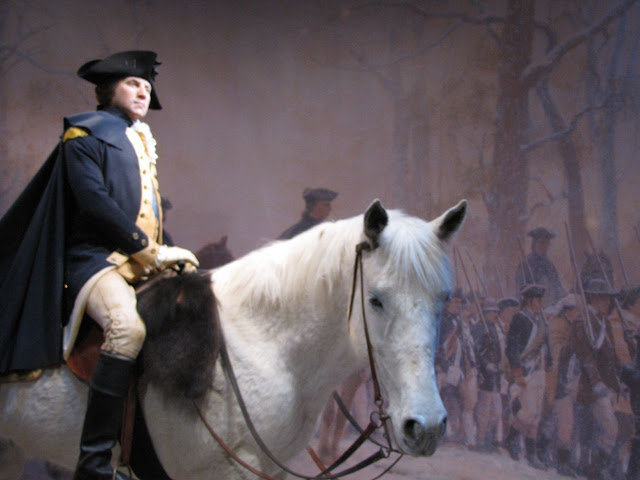 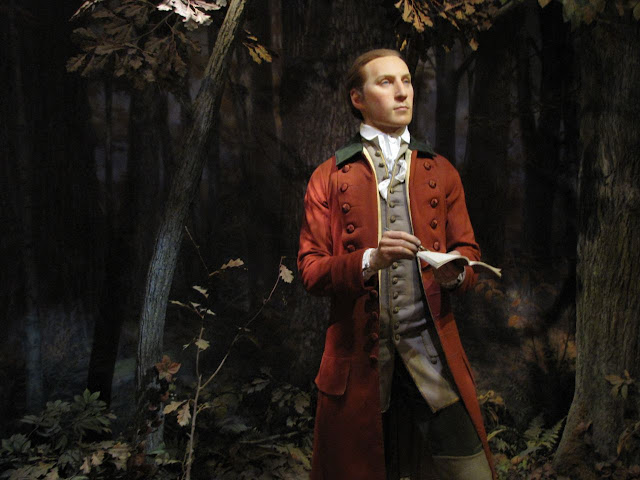 Colonel George Washington
(French and Indian War Period)
--------------------------------------------------
Overall, the estate was a great experience. I showed up mid morning on a rainy day and was shocked to see the line to get into the house tour was several football fields long. I waited well over an hour outside as the long single file line inched slowly forward. I also made some new friends from Nebraska who didn't have an umbrella! I would love to go back and explore the long walking trail along the Mount Vernon Memorial Highway that parallels the Potomac River on your way to the estate. It is a ten mile long paved trail that is called the Potomac Heritage Trail. It looks like something worth checking out on a rain free day.