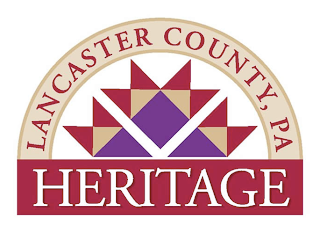 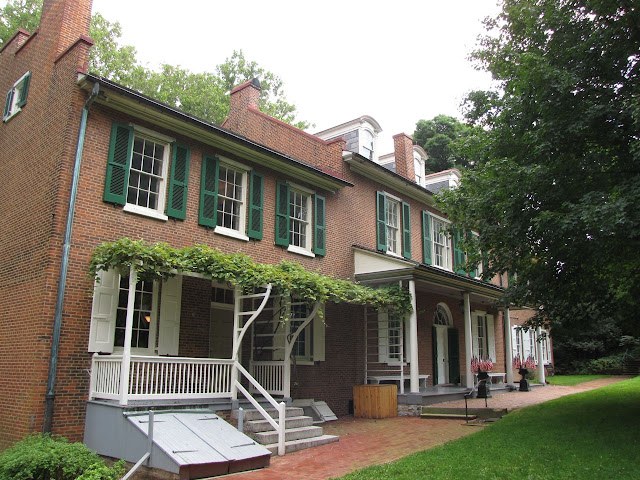 Wheatland Estate
--------------------------------------
On this episode of Camp Martin Travels, I stopped in to see one of Lancaster County's most overlooked landmarks, the home of President James Buchanan. The presidency of James Buchanan was plagued by problems that often lands him at the top of the list for... worst presidents in history. Serving the office on the eve of the Civil War, as the nation's fifteen president, was not a good time to hold the highest office in the land. The nation was pulling apart and was on the verge of violence on a broad scale. Buchanan was seen as a politician from the north who was sympathetic to southern issues. This moderate position enabled him to gain the democratic nomination for the presidency and he later won the overall election. He is sometimes called the reluctant president because he only wanted to serve one term and even went so far as to promise to that fact, in his inauguration speech. 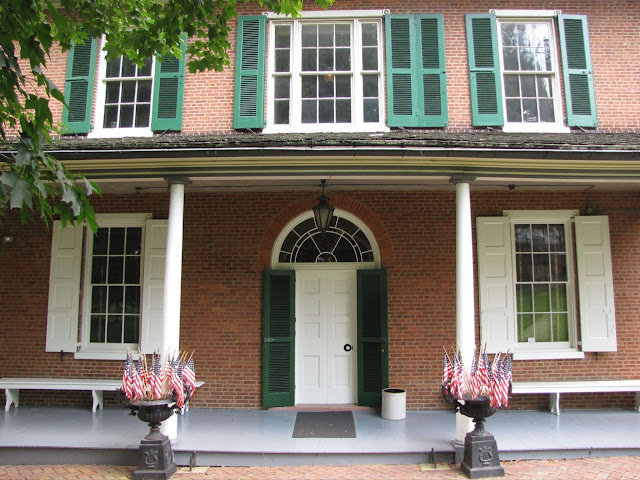 Rear Porch / Entrance
-----------------------------------------------------
Wheatland was originally a 23-acre estate just outside the city of Lancaster that contained a federal style mansion and several out buildings. It was created and built by a lawyer from Philadelphia and was later purchased by Buchanan in the winter of 1848. Although Buchanan was a life long bachelor, the Wheatland home was filled with the sounds of children. Following the death of his sister, her two children, Harriet (age eleven) and James (age seven) were adopted by James Buchanan and came to live with him at Wheatland. Both children would go on to play key support roles when Buchanan later became president. His nephew James Buchanan (J.B.) Henry grew up to study law and later became Buchanan's personal secretary at the White House. His Niece Harriet Lane, served as his First Lady and was highly respected for her ability to run the social affairs of the presidential mansion. 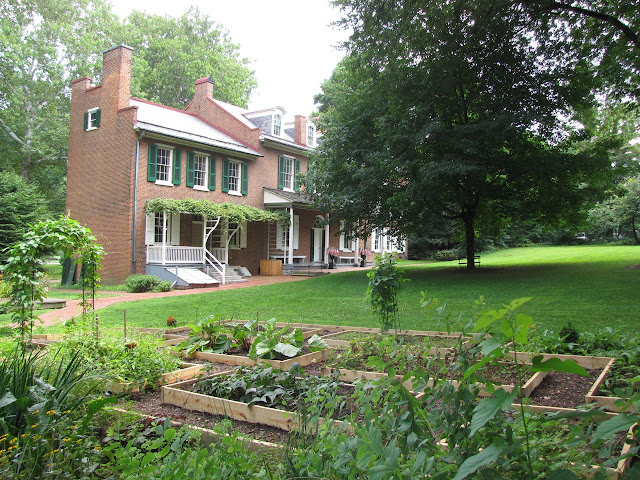 Vegetable Garden Boxes
-----------------------------------------------------
The house itself is one of the finest federal style restored homes in the country. The interior contains many artifacts that are original to the house including the dining room china, much of the furniture, and several pieces of artwork. Following Buchanan's death in 1868, many of the home's pieces stayed in the family and were later returned to the estate when it became a historical landmark. All of the rooms are lavishly decorated in the style of the period and several rooms are not railed off so you can walk freely through the space. Unfortunately, like many historical homes, the interior is off limits to cameras so you will have to use your imagination or take the tour yourself. 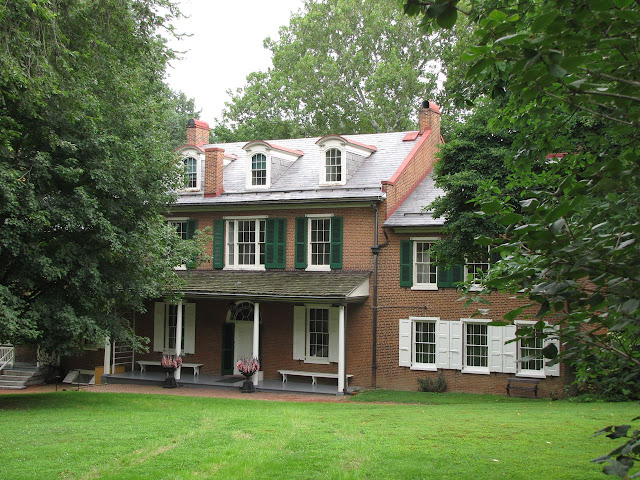 Rear Lawn / Entrance
-----------------------------------------------------
Our tour was led by an elderly woman who looked like she was old enough to be Buchanan's aunt. However, she was very informative and had several unique interesting stories to share. One that stuck out was how President Buchanan and his nephew J.B. Henry worked very closely together but later had a falling out over the fact that J.B. wanted to grow a mustache! Buchanan would have none of it and the two parted ways over the issue and never fully reconciled. Power struggles between parent and child are apparently timeless.  Incidentally, J.B. grew the mustache and kept it for the rest of his life. I hope it was worth it! The exterior gardens are beautiful and are maintained by members of a local garden club. Wheatland has recently fallen on hard times with financial problems and as a result, has joined forces with the Lancaster Historical Society (located next door) to try and help with additional funding. 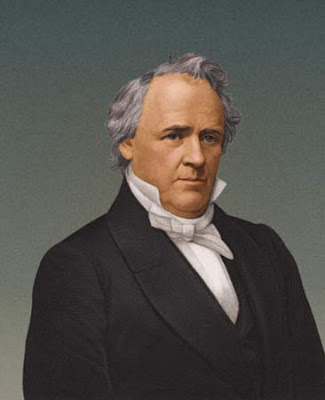 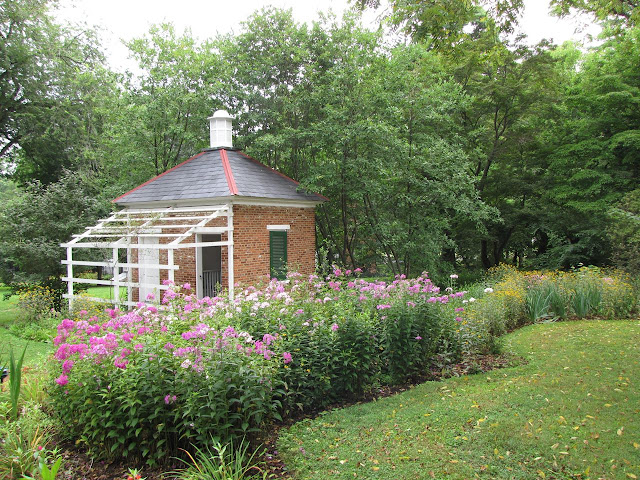 Buchanan's Privy
-----------------------------------------------------
One of President Buchanan's most memorable quotes came on his final day as president when he remarked to the incoming president-elect, Abraham Lincoln... "If you are as happy in entering the White House as I shall feel on returning to Wheatland, you are a happy man." Buchanan did enjoy his remaining time at Wheatland enjoying the peace and quiet, enhanced by the company of friends and family. He continued to be generous to others, supporting extended family and even quietly financially supported former first lady Dolly Madison when he learned she had become impoverished . He died in the upstairs bedroom on June 1, 1868 at the age of 77 and was laid to rest in the Woodward Hill Cemetery in Lancaster City. 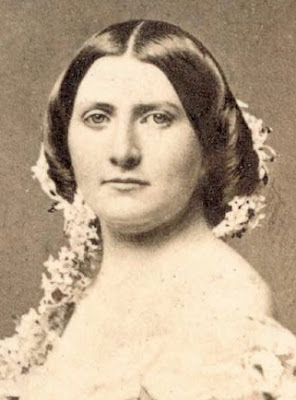 Portrait / Harriet Lane
Photograph: Waidner-Spahr Library
-----------------------------------------------------
James Buchanan's greatest legacy may be his niece Harriet Lane.  When she ran the white house social calendar for her bachelor uncle, no one really knew how to address her.  One day a reporter called her the First Lady and the label stuck and was later applied to all who held the position.  She became enormously popular in Washington and was the talk of the capital.  She married late at age 36 but was followed by tragedy as her husband and both sons died.  She turned the grief of her young sons into helping found the pediatric hospital at Johns Hopkins University in Maryland.  This action laid the groundwork for the prestigious hospital we know today as one of the best in the world.  Like her uncle she was very generous, using her wealth and influence to support various causes including Native Americans, education and the arts.  Her vast collection of fine European art was the first donated and displayed at the Smithsonian Institute. She turned the grief from her own personal tragedies into helping others and left the world a better place following her death in 1903.  We continue to benefit from her generous gifts. 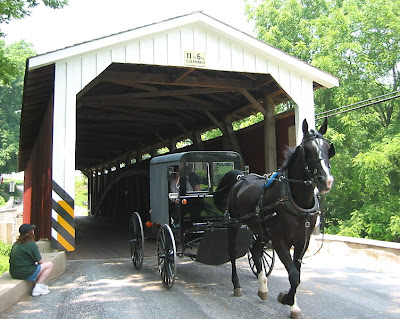